My Dad has been in this same house just a year or two shy of fifty years now. It is where we moved when I was twelve. We had moved often and lived in a variety of places mostly in the L.A. area before settling here in 1968. My younger sister was born and raised in the same house and it is still the site that defines our family history. We are staying in the room I had back in Jr. High.

Been keeping busy since arriving at Dad’s house. Friday, I somehow managed to line up three same day medical appointments. I had only intended to arrange visits for the following week, but each provider had openings for that day. Some only for that day. So I was off and running. First was the eye doctor for an eye exam. She dilated the eyes and took a long careful look at the retinas since I still experience seeing occasional flashes of light in my right peripheral vision. Retina’s okay. The vitreous is still detaching. This has been going on since last October in Georgia slowly abating but still there.

From there, I was racing off to the Scripps coastal clinic to get a check up. I was there for quite a while getting prodded, doing blood work, getting a chest x-ray and having an ECG. There are a few things they want to explore further. I’ll get the results of the blood work Monday and we’ll go from there. Next, I barely had time to jam down to Encinitas to see the dermatologist. She looked me over and froze off a bunch of little pre-cancers and keratosis. Finally had a chance to take a breath. I’d been running since 11:00 and it was now after 4:00. I had missed lunch, so I swung by Sprouts and got a bite to eat to hold me over until dinner. PJ flew in Friday and she was waiting at the house when I got back. A nice dinner with the family and reunion with the wife.

Saturday, we unloaded the RV to go through our stuff. PJ went to spend time with her sister and I went with the family over to my sister’s for a backyard barbecue. Fun time hanging out with the niece and nephew. Their place is really looking good. Lee has always got a project going on and truly enjoys doing the home improvement thing. It’s colder than I realized and I had to borrow a hoodie to keep warm out on the patio. We munched kebabs and talked until late. 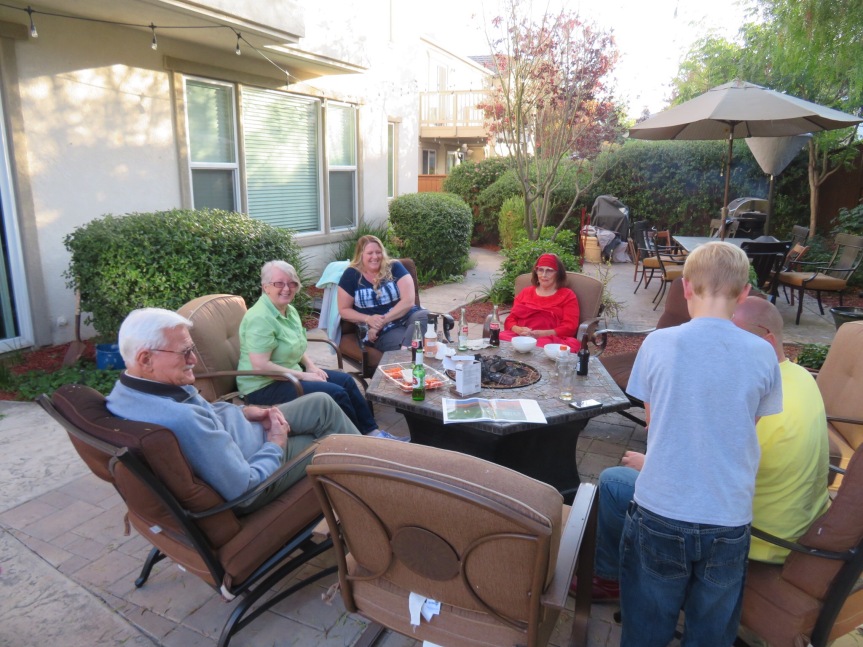 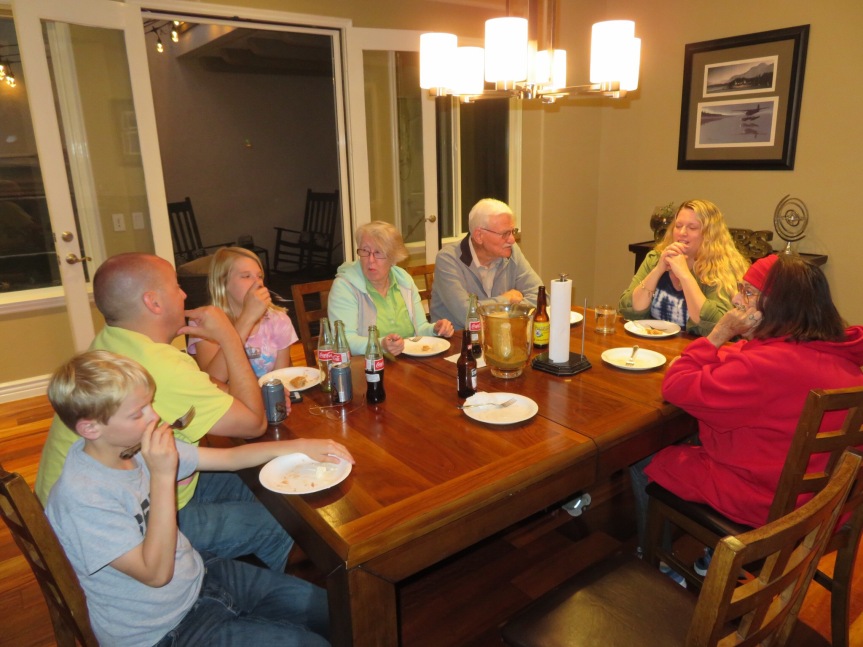 This morning, P.J. took off to do some family stuff and I stayed at Pop’s and washed the dogs. They were so excited to be clean that we went for an hour long hike down the hiking path and through the lower neighborhood. Brought them back and raked their coats with the Furminator and got them all soft and shiny.

P.J. and I ran some errands then stopped by the Winco and picked up some steaks for a barbecue. I charred the meat while Sandy made the salad and corn. She also baked a piece of fish for P.J. We sat out on the patio and had a hearty dinner as the sun dropped low and the temperatures took a dip. Went inside and visited a bit then early to bed. 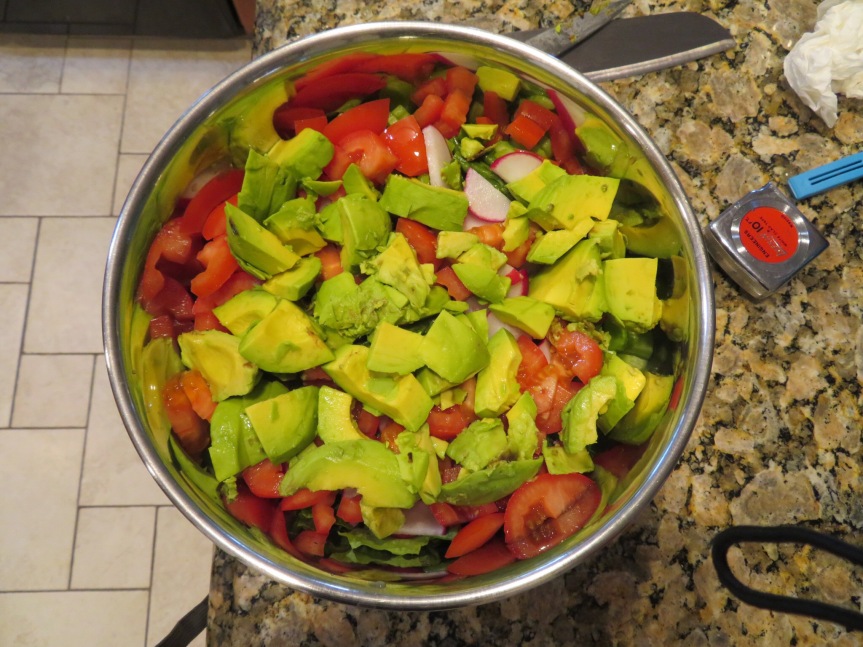 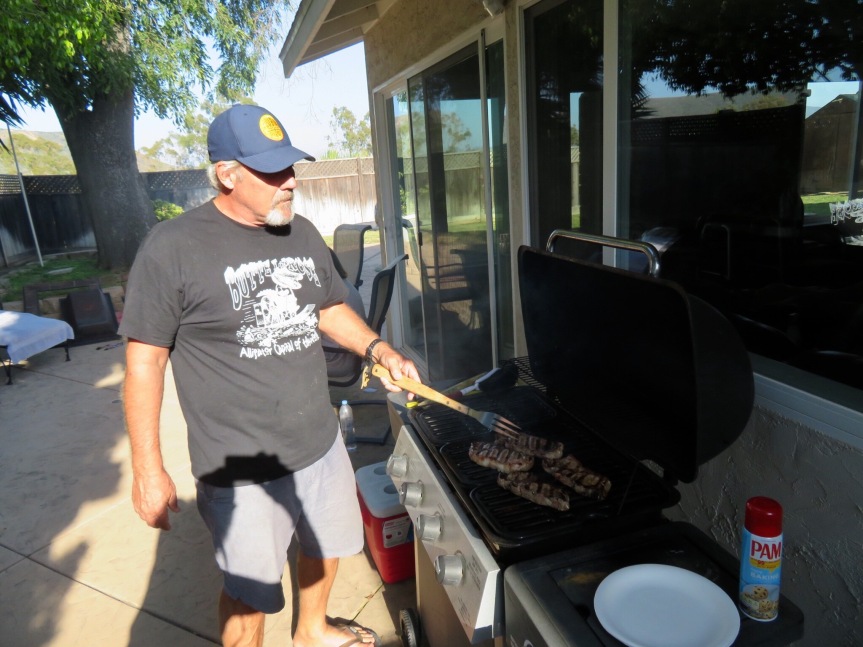 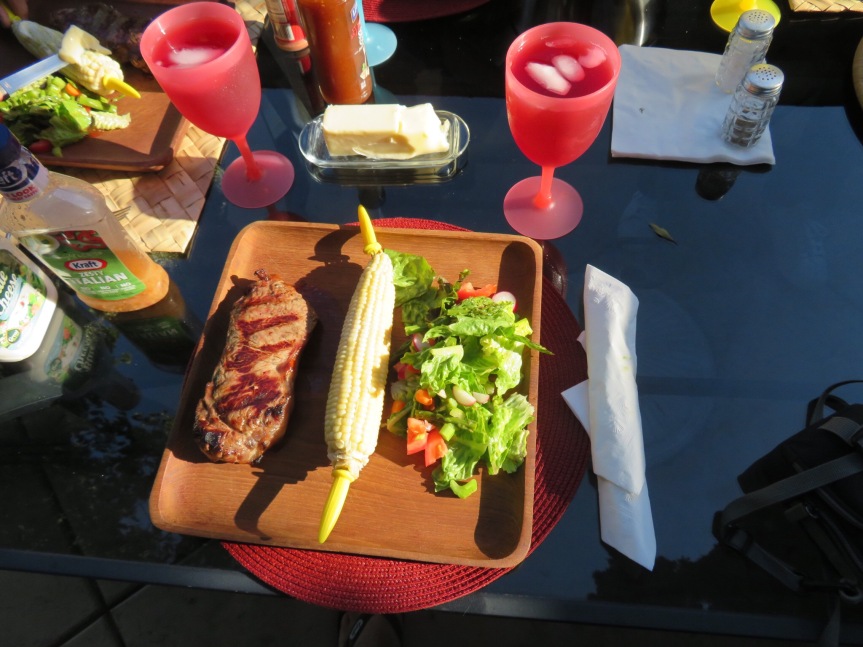