I woke up early and explored the camp with the dogs. We packed things up, showered and I gave the tires a quick check over since the pressures had gotten overly high yesterday with the heat. I dropped them down a few PSI.

We are parked up next to a young couple with three kids who are getting ready to take off full time RVing. Jimmy and Sandi are video producers who are taking the leap to live a life less ordinary or as it says on the front of their bus ‘try’n something new’. We talked about traveling in Mexico and I mentioned that he might like the Bumfuzzle’s blog and it turns out that he knows them personally. We shared information on places to visit and websites to check out. Checked out their remodeled bus and he showed some videos that they have done. Awesome stuff. Unique, happy, glass half full family. Wish them the best on their adventures. Hope to cross trails on our travels.

I’d never run the gas tank this low, but I didn’t want to fill up in California since gas is so much cheaper in Nevada. It’s makes PJ nervous when I let the gauge drift towards E, but I like to keep the weight down. She thinks running the tank down as close to empty as you can is a guy thing. She may have a point. Anyway the RV soaked up 45 gallons of fuel for a total of $120.00 and about 280 pounds.

Uneventful drive through Nevada, crossing a little corner of Arizona and on into Utah. The wind was blowing hard all day making driving harder than it had to be. Lots of climbing going from 2000 feet in Vegas up to 6000 feet in Beaver. Lexi did o.k. on the hills. Some times I’d have to drop down to 45 or 50 mph on the steepest parts but mostly managed to keep it over 55. The temperature crept up a few times so we’d turn off the AC and it stabilize. 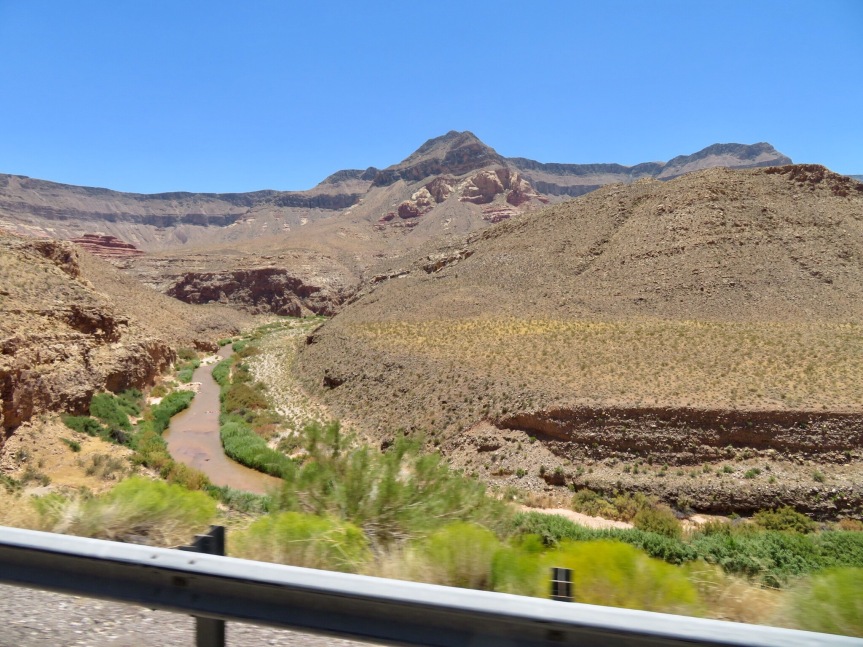 We passed through lots of beautiful rock formations and canyons and as we climbed in elevation the landscape turned to Pinyon pine and juniper woodlands. We hit a park in St. George and let the dogs run around awhile as we ate our peanut butter sandwiches. We topped out at a summit of 6500 feet just before arriving in Beaver.

Somewhere along the road yesterday, we passed the 10,000 mile mark on our travels since leaving home last August. 310 days on highway. 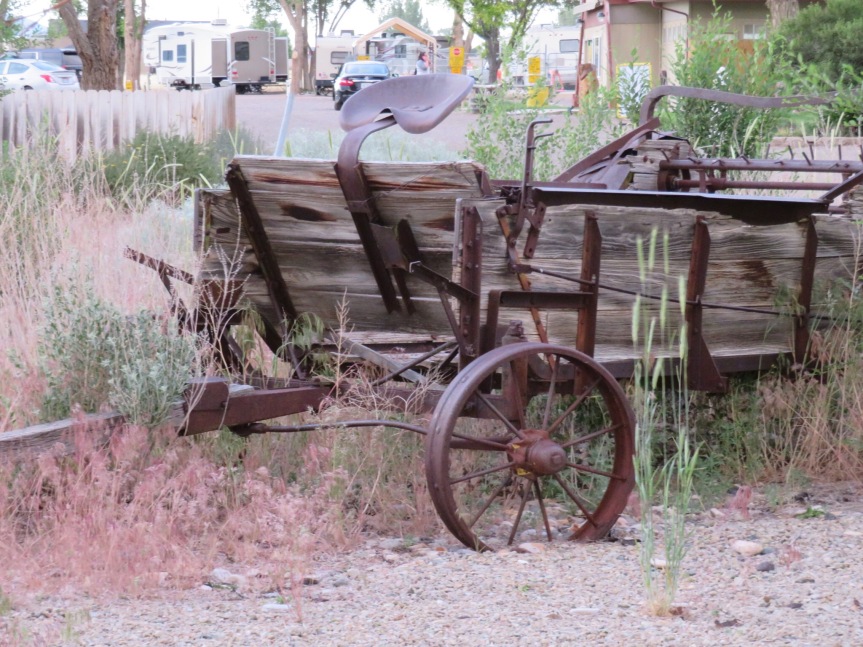 I had scouted a campground to stay at in Beaver that had gotten some nice reviews online. When we pulled up, there was no one around in the office to check in with. I wandered around even poking my head into the little Mexican restaurant they had on site. The girls waiting tables were swamped and there was nobody else to ask. We drove in to have a look and the place was mostly full timers loitering around in their wife beaters with cigarettes dangling from their lips. We decided to pass and googled up campgrounds in the area and eventually ended up at a KOA closer to town. 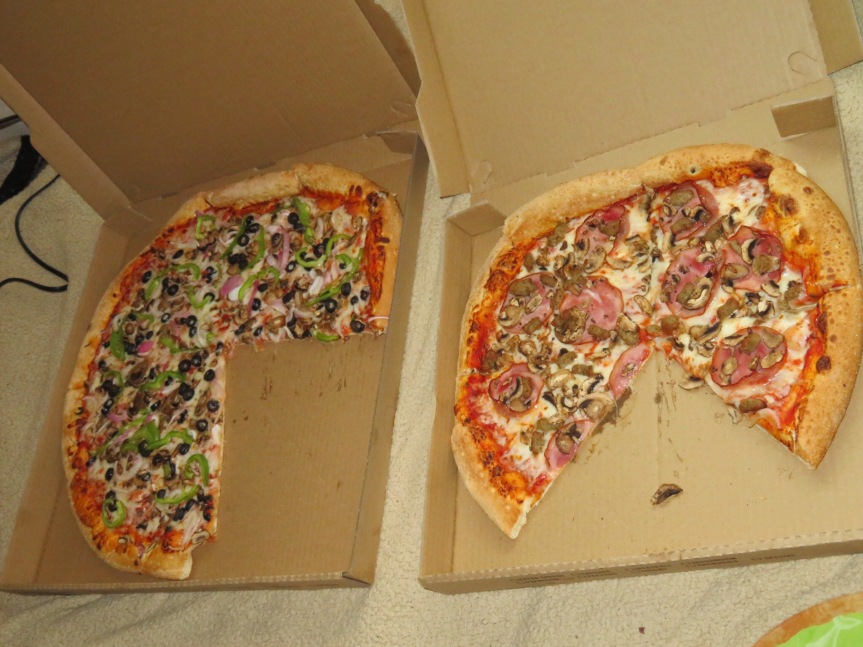 The KOA is pretty basic but the sites are big and it’s mostly families with kids or retirees. The lady in the office expressed surprise that I would balk at taking the spot adjacent to the dump station and the trash suggesting that I might be overly picky. “No one has ever complained about that spot”. Anyway, she wasn’t budging but it’s not bad. She gave me an ‘I ❤️ Beaver’ sticker figuring that should make things right. I parked at the far end of our site and we moved the table over next to the RV. 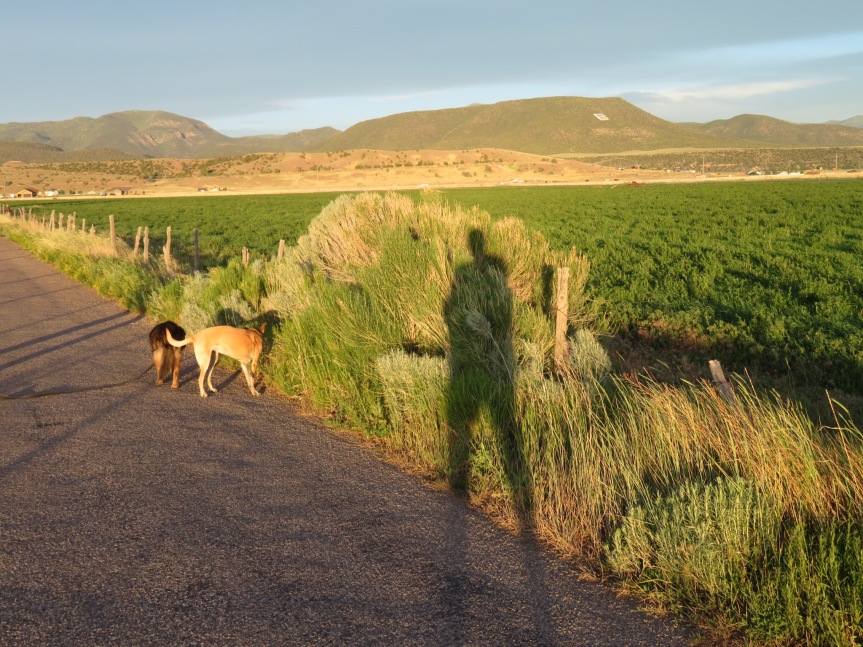 The area around the campground is beautiful. There are still a few little patches of snow on the higher peaks. Flowing green fields of alfalfa back up onto the foothills with picturesque farm houses dotting the landscape. We took a long walk along a rural road with no cars. Let the hounds run free and watched the sun set over the mountains. 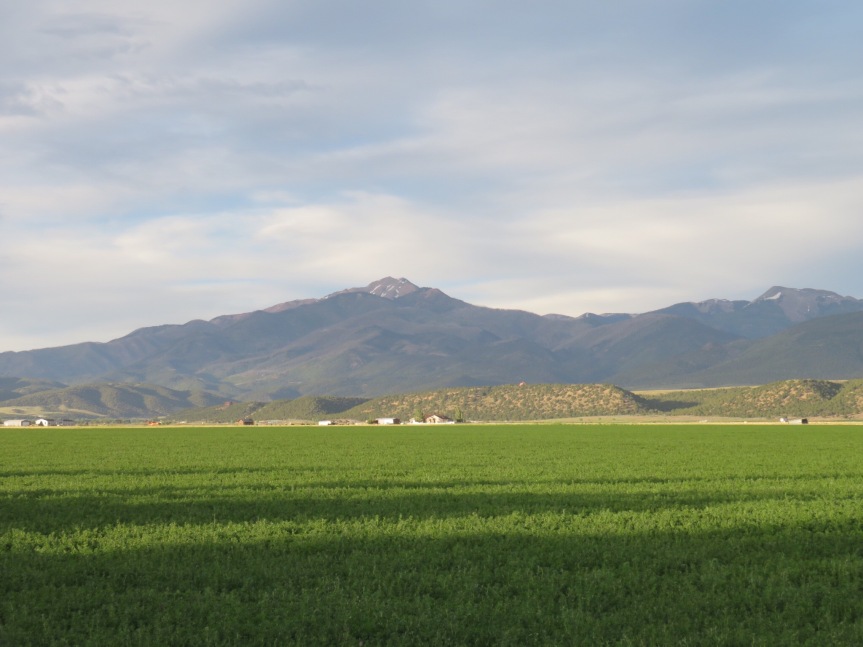