The day started out grumpy and didn’t change much throughout the drive. Too many hours in the saddle and not enough time outside enjoying the America we are blowing through. It’s one of those days where we can’t seem to agree on anything. Winds are gusting 25 – 30 mph and it is a chore keeping Wilson between the lines, constant vigilance. It’s not only Wilson, but the trucks all around us that are swaying side to side often stepping over the line. Just outside St. Louis, there was an old class b camper van that was swerving like a drunken sailor. We gave him a wide berth.

We gassed up out in the prairie and sat inside eating a quiet sandwich. Then back out into the weather for some more abuse. The rain has slackened off and the sun is threatening to poke its mussy head through the covering clouds. Traffic was thick going through St. Louis with lots of changing freeways to get out on the other side of the city. Look out world, we’re changing lanes. Actually, for the most part, people in the midwest are usually really good about letting a befuddled tourist get over where he needs to be. 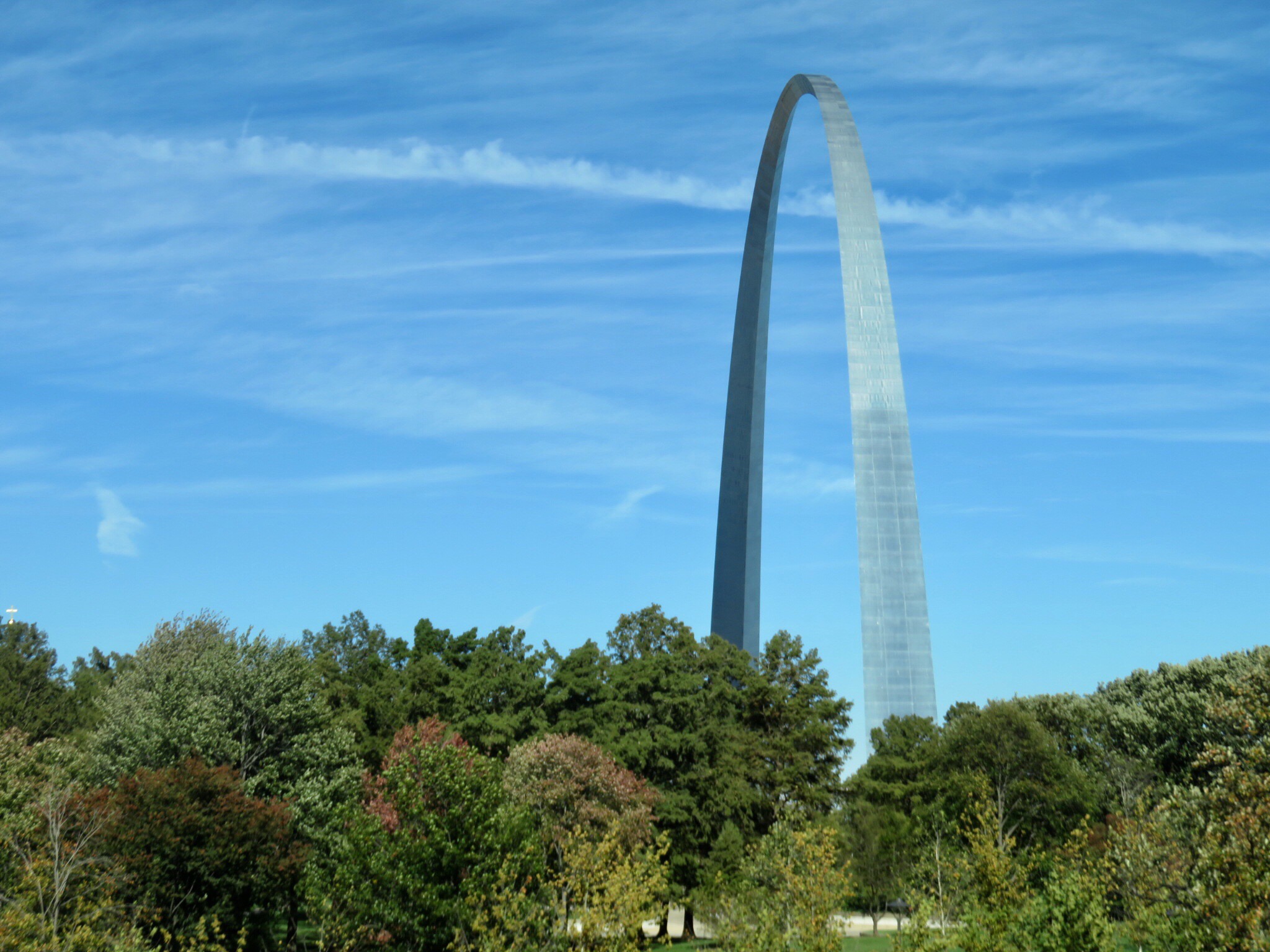 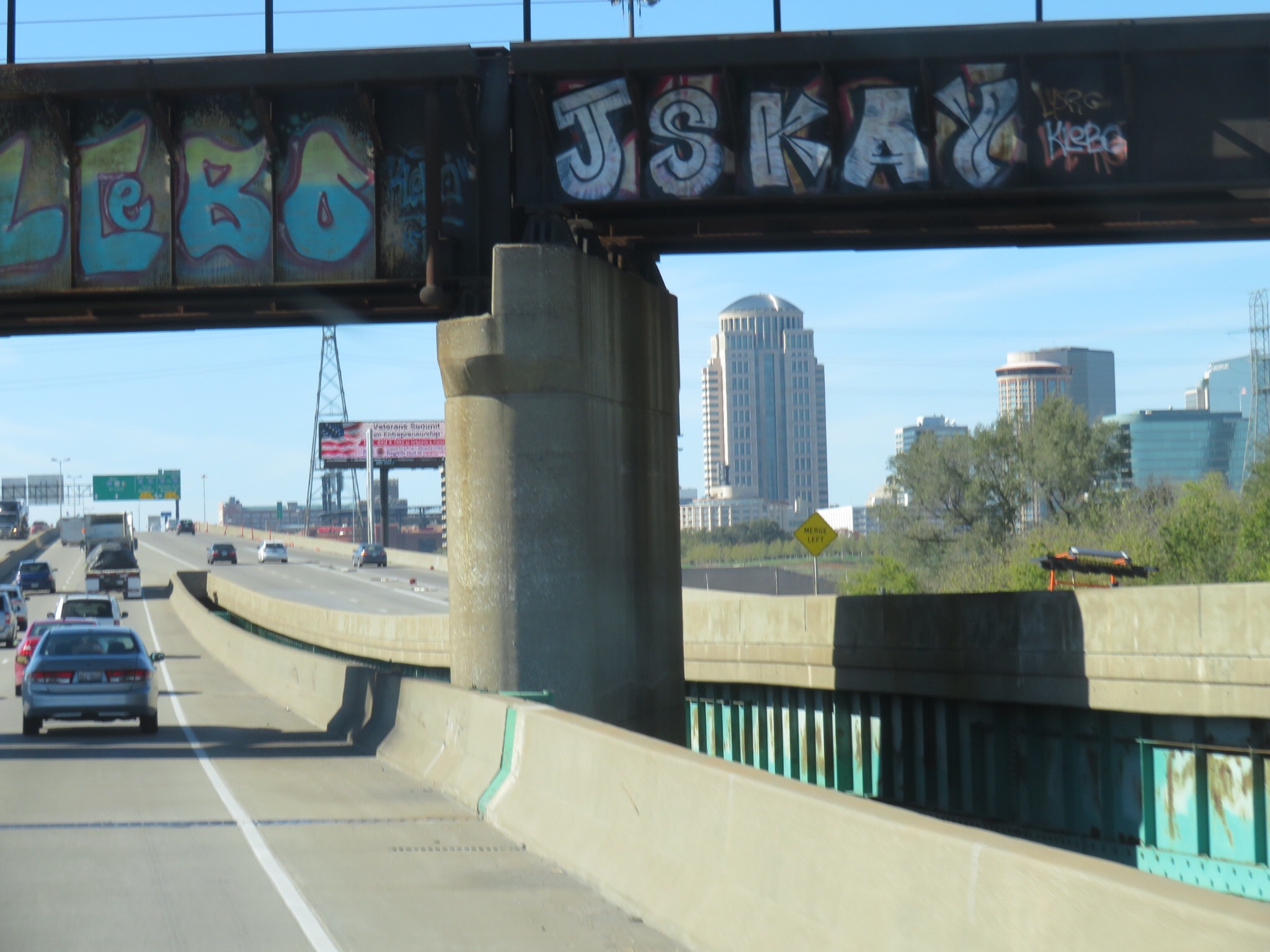 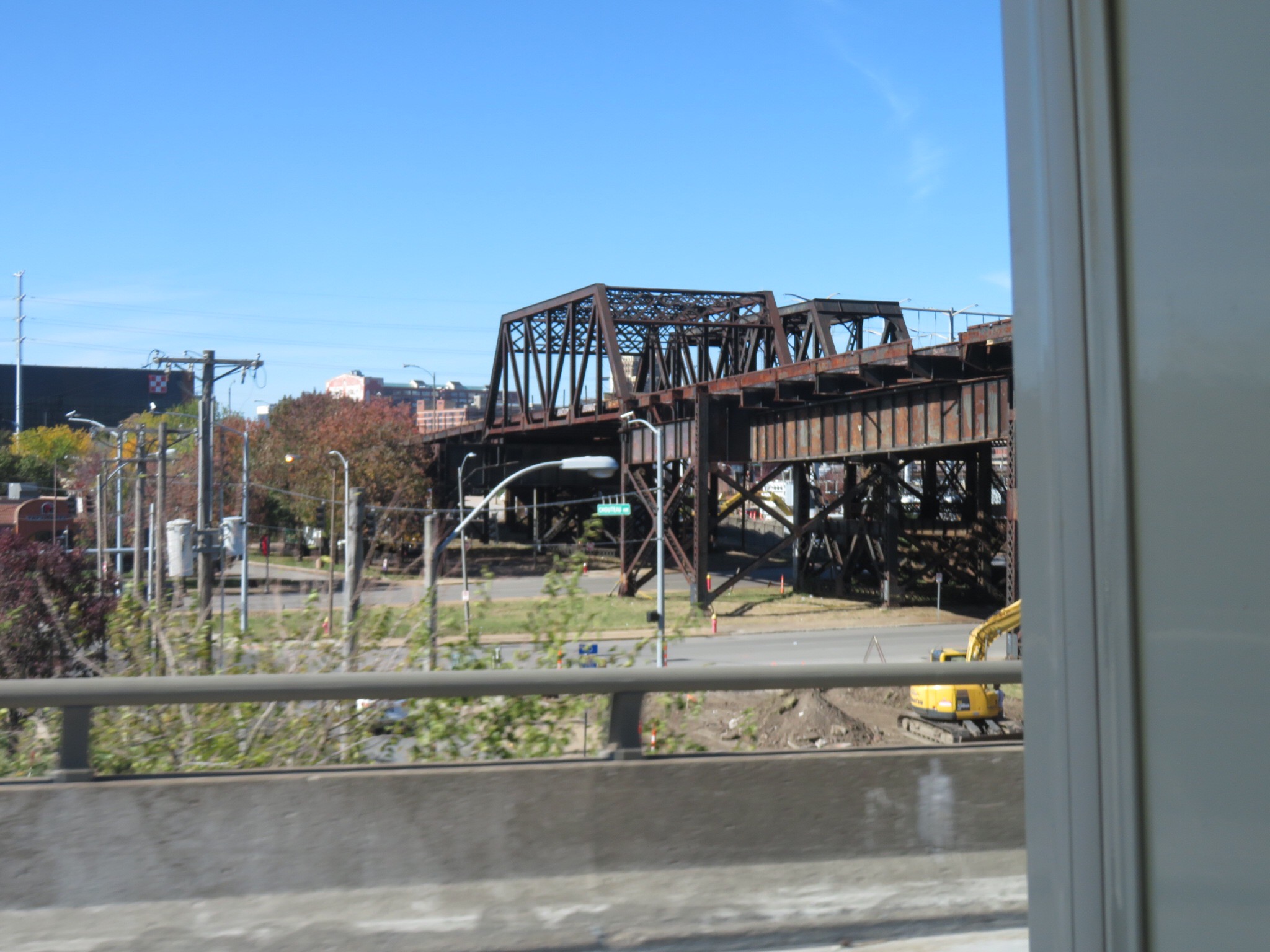 Today’s stop is Meramec State Park near Sullivan, MO one of my favorite stops on last year’s crossing from west to east. A huge expanse of meadow lined with giant trees that sits along the banks of the meandering Meramec River. We had a great stay here last year buzzing around on our bikes and swimming in the cool waters of the lazy river. Probably won’t be too much swimming going on this go round.

Alone, for the moment

The campground was nearly empty when we reached the kiosk. We selected a site with no one else around, at least ten empty camps between us and the nearest lonely neighbor. We set up camp and I went to air up the bicycles. The cargo bay where I keep the compressor and the digital gauge had a quarter inch of water standing on the bottom soaking all of the gear in the storage area. S$*@#, another thing to add to our punch list on the RV. That makes two storage bins that let water in. I mopped them out and moved the few items in there over to a dry bin. I had already populated the long basement that leaks with hoses and other wet stuff that I have in Tupperware’s so that one’s okay.

We got camp set up and were shaking off our irritable moods. We hopped on the bikes and rode them down to the end of the camp where the swimming area is. A little too cold for a dip today but we walked around the shore and enjoyed the beauty and quiet of an eerily deserted state park. A deer came down to the water for a drink and the sun played games with the shadows as the evening began to darken. 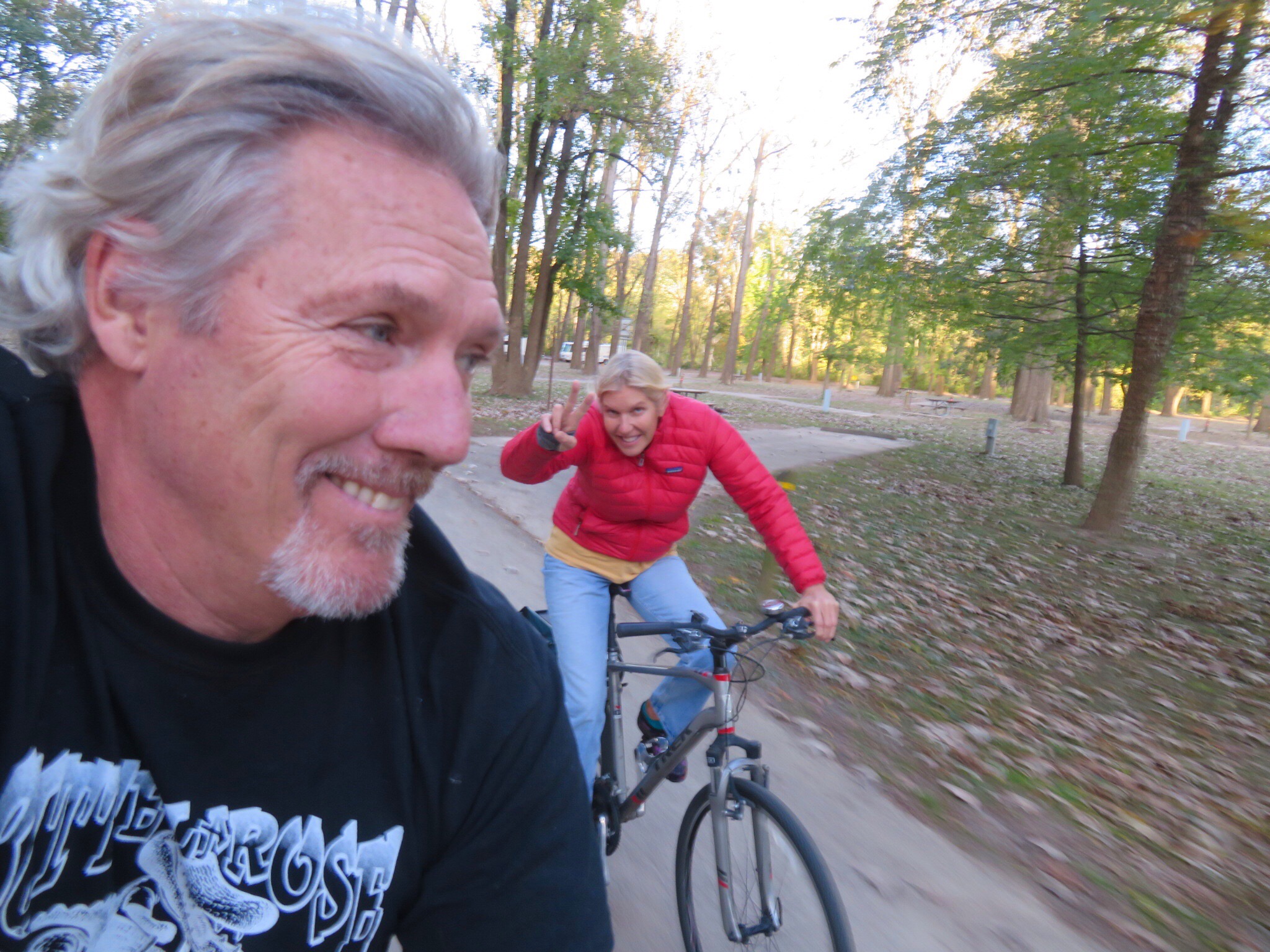 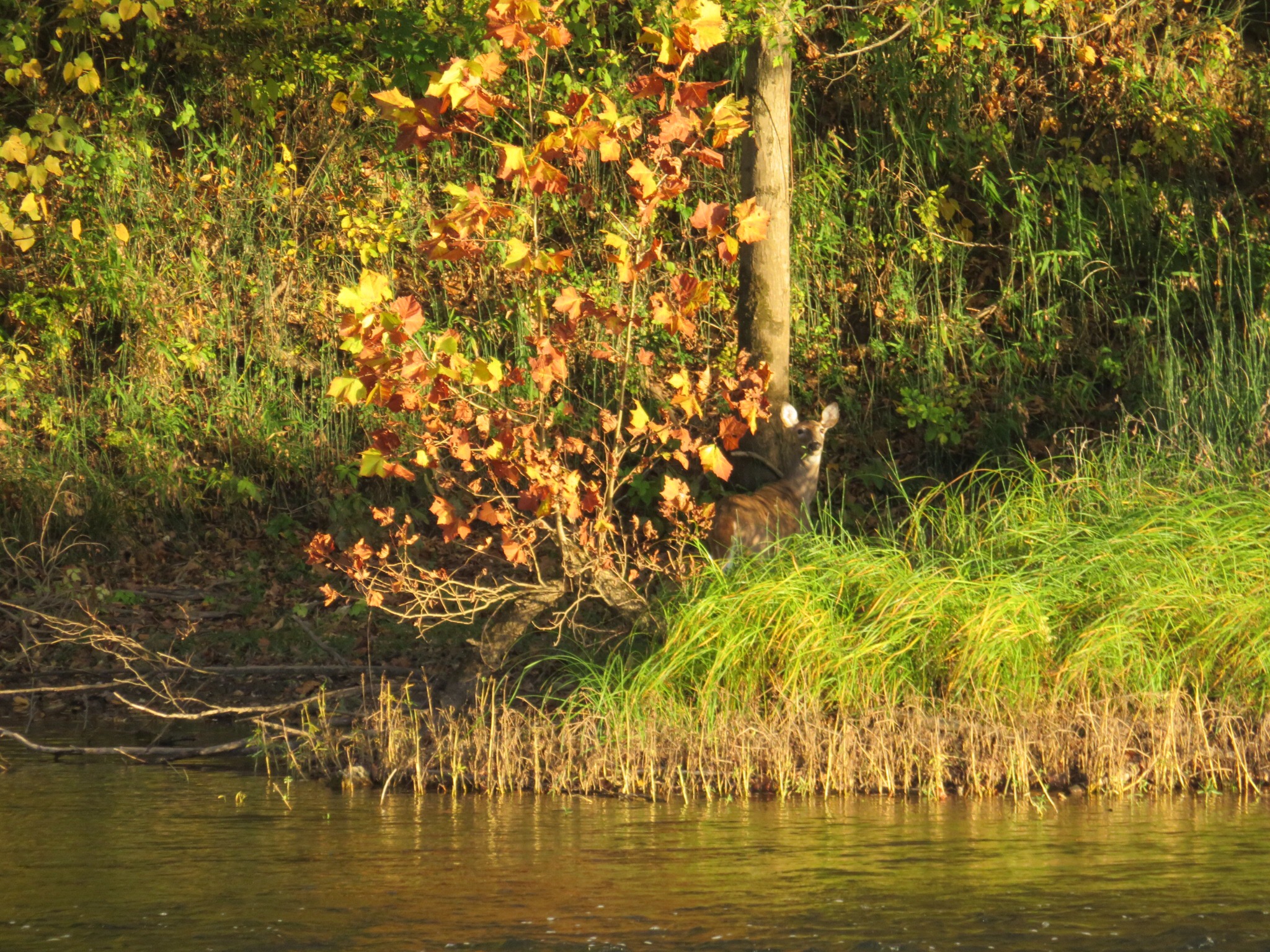 We rode back to camp only to find a big family setting up in the campsite IMMEDIATELY adjacent to us. ???? Can never figure people out. I mean literally, there are about 10 campers spread out over 200 campsites. There are open spaces everywhere. It reminds of days surfing marginal stretches of beachbreak where every little peak offered the same dribbly close outs. So I’d just pick a random spot and paddle out only to have a car pull up and two guys come paddle out to sit in my lap. Anyway, PJ said hello while the older boy kicked away on his little razor scooter outfitted with a motor simulator noise maker and the little Yorkie mix dog started growling and barking at Koda.

We took the dogs for a long walk as the sun disappeared then came back and made soup and salads. While finishing dinner, a large class c motorhome pulled in and parked in the camp site right next to us on the other side. We just laughed and went to bed.

One thought on “Meramec State Park”