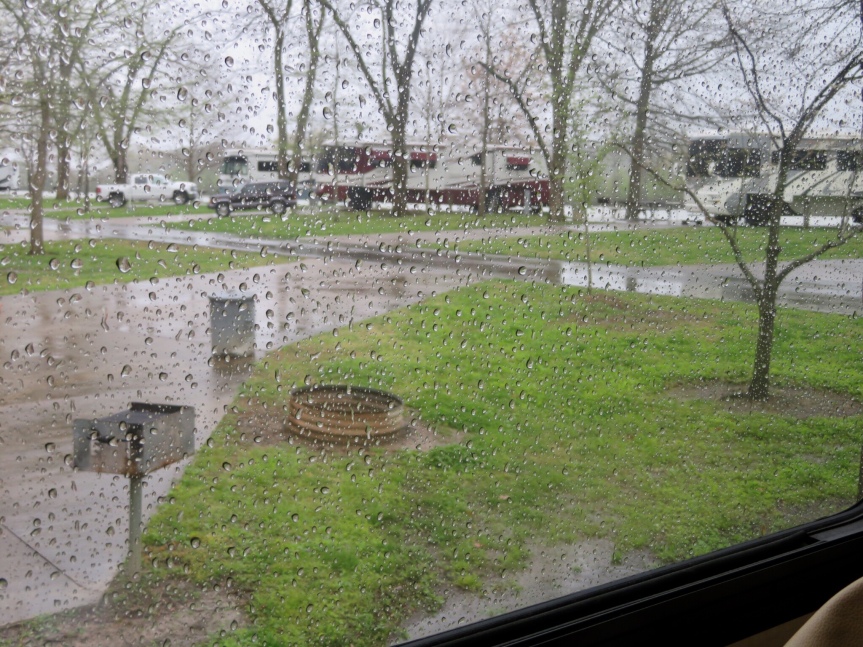 I woke up early anxious to see if the anticipated storm had arrived as predicted. At 7:00, it was really overcast but the rain had yet to materialize. Cali and I got in a decent walk out towards the camp entrance then went back inside to have our breakfast. I decided to catch up on my accumulated laundry so I stuffed it all in a pillowcase and took it over to the small laundry room across from the bath house. Poured in some soap, loaded in my clothes then put my quarters into the little push in slot thing. F@#*ing thing wouldn’t push in. I tried maneuvering things around and checked the electricity, but it was definitely out of order. Pulled my clothes back out and stuffed them once again into the pillowcase, only now some shirts had wet soap on them. As I was lugging my sack back to the motorhome, a guy I passed said he’d told them a week ago that it wasn’t working. Went back to the RV and took a few deep breathes so I wouldn’t vent on the camp host when I hiked out to the kiosk to pay them up for another night. By ten, it had begun to rain and I felt I was best off staying here. The pads are concrete and each site has its own trash can, a far cry from some parks where you have to tote your trash a mile just to toss it. 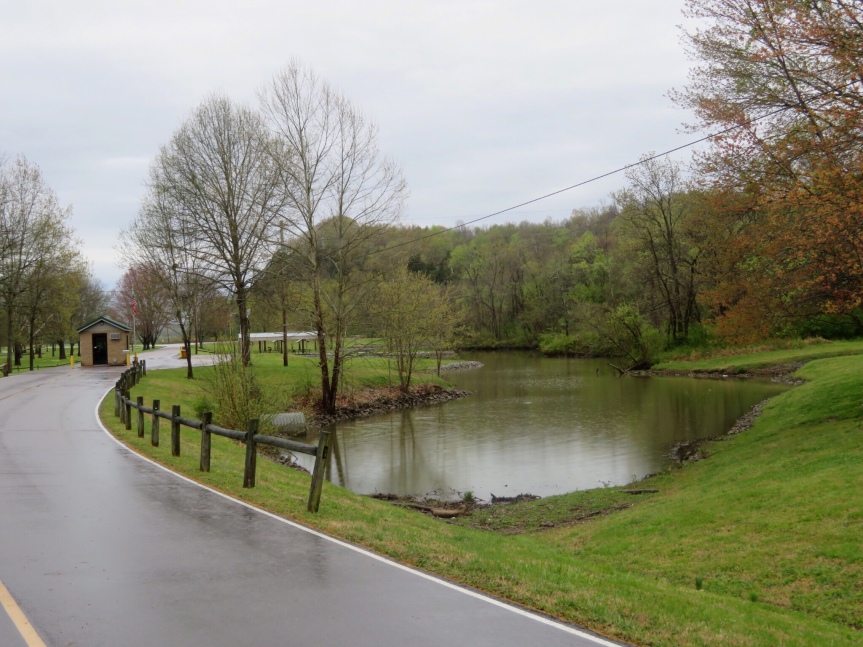 We holed up inside through most of the day. Some over the air channel was having a ‘Magnificent Seven Marathon’ so I watched a little of that. Every once in a while the rain would ease up and we’d take a walk around. We only had one lightning bolt and thunderclap at the beginning then it was just straight up rain. On our midday excursion, I heard a big droning sound coming from the river. Who’d be out on a boat in this weather? A giant barge that’s who. There’s 700 miles of navigable waterway here on the Cumberland River. They haul concrete, coal, chemicals from a Dow plant and I don’t know what else. Pretty big unit moving down the river. 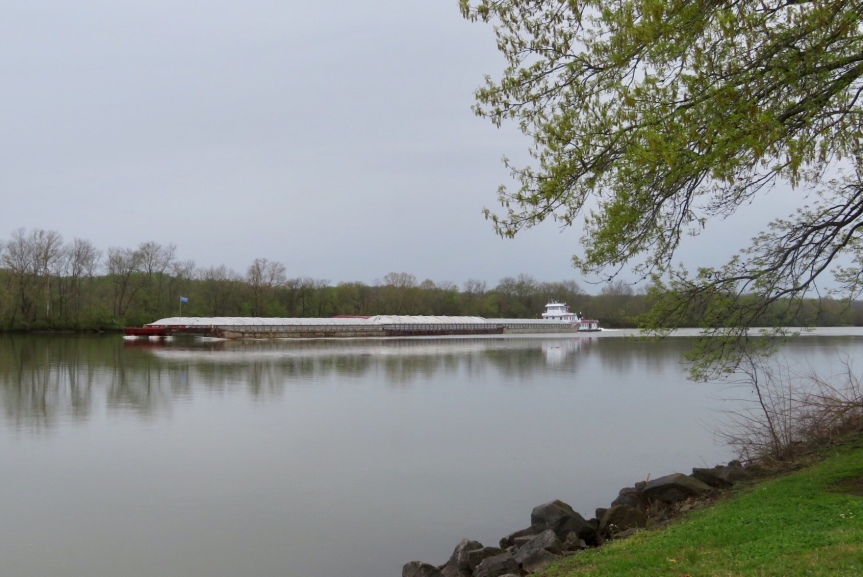 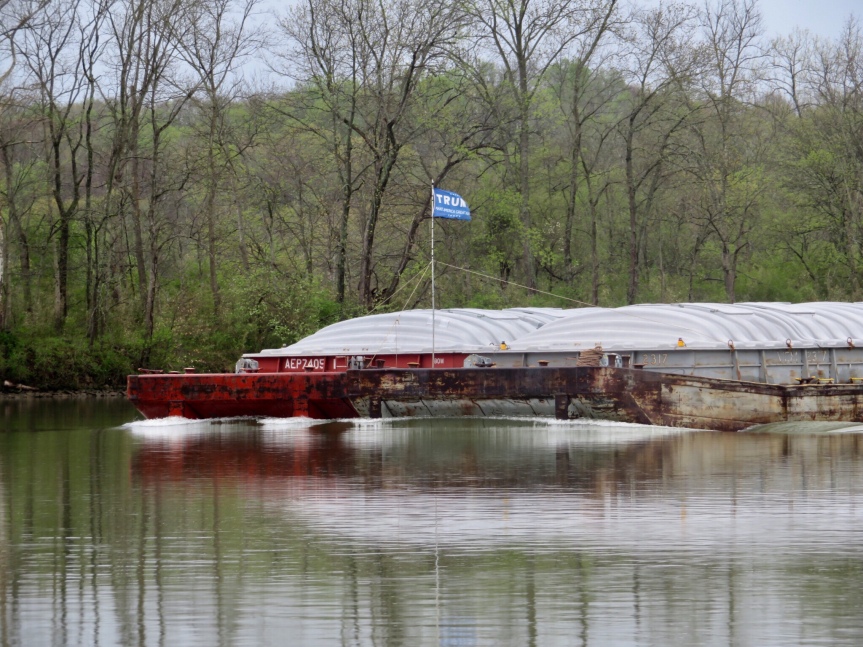 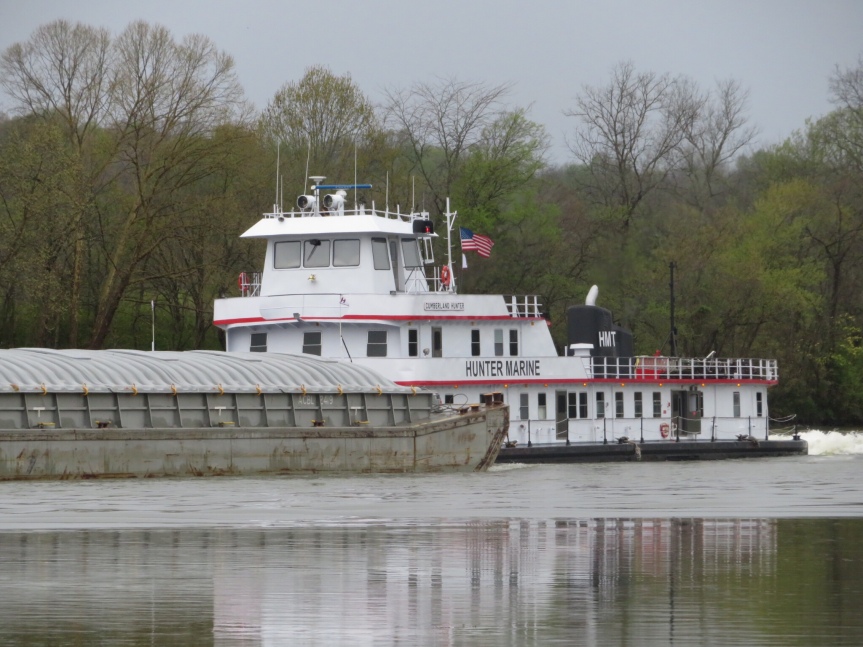 The vast majority of campers here are from the local area. It’s all pretty much Tennessee plates on the various duallys and pick up trucks. I’ve got to hand it to them. They are a hardy lot. If it rained like this at San Elijo or Carlsbad, the patrons would be fleeing the park like cockroaches with the lights turned on. Not so here in Tennessee. Not a single rig exited the park. Every space but a few are occupied. Larry the cable guy next door just put out the awning and stood underneath it watching the rain fall. When it stopped for several hours in the late afternoon, he was out there with a can of gasoline and a yard blower getting his wet firewood to light back up.

This was pretty much our day

During this interlude, Cali and I took a long hike on the trail that winds behind the campground running between the granite cliffs and the river. We walked several miles spending maybe an hour and a half wandering around checking things out. We were the only ones out there so Cali got to run free. She’s eating more but pooping less. Always something else to worry about. 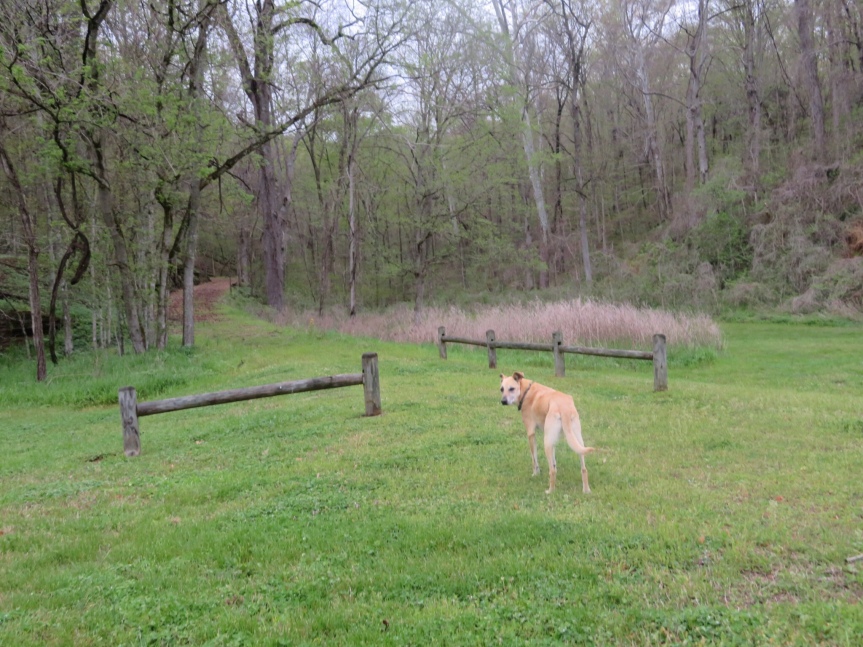 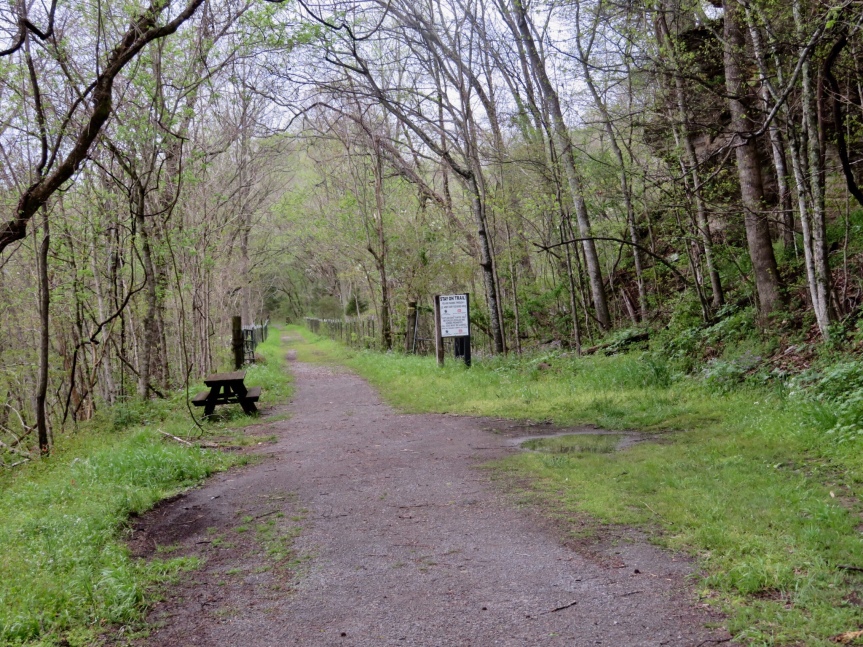 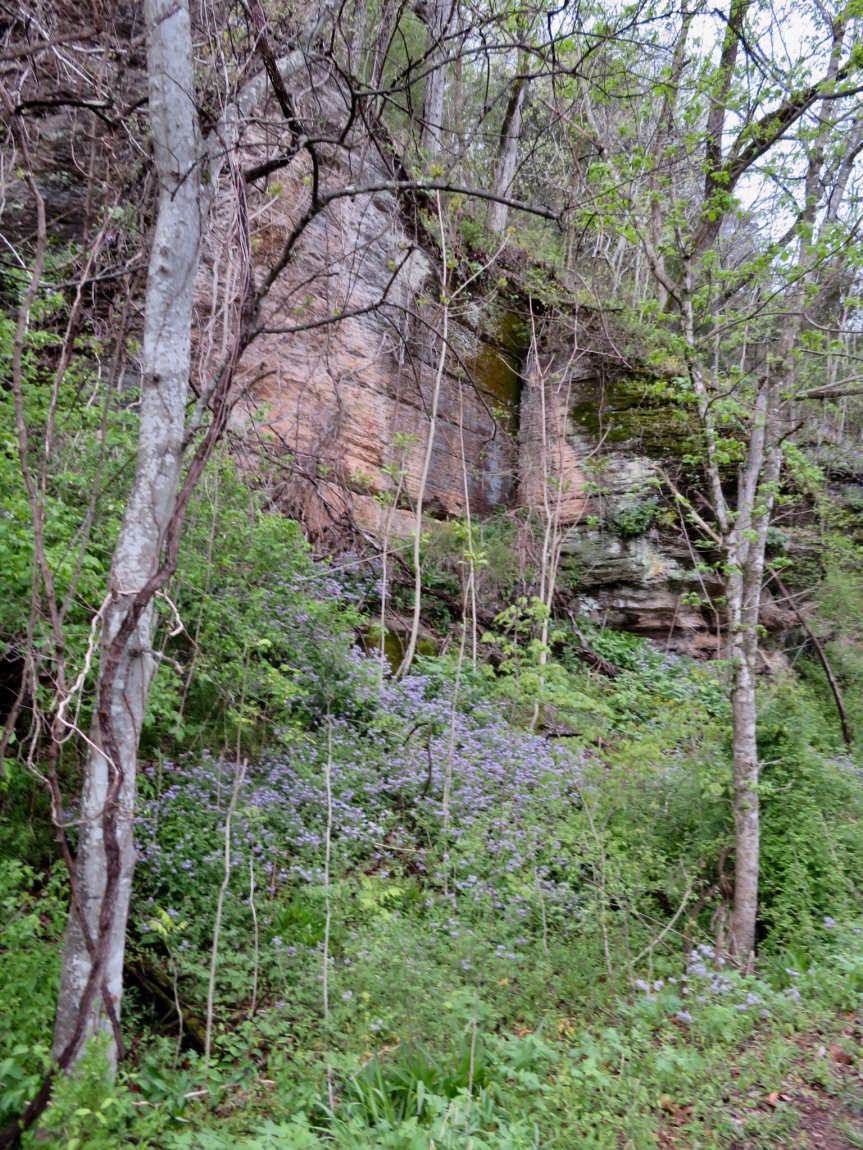 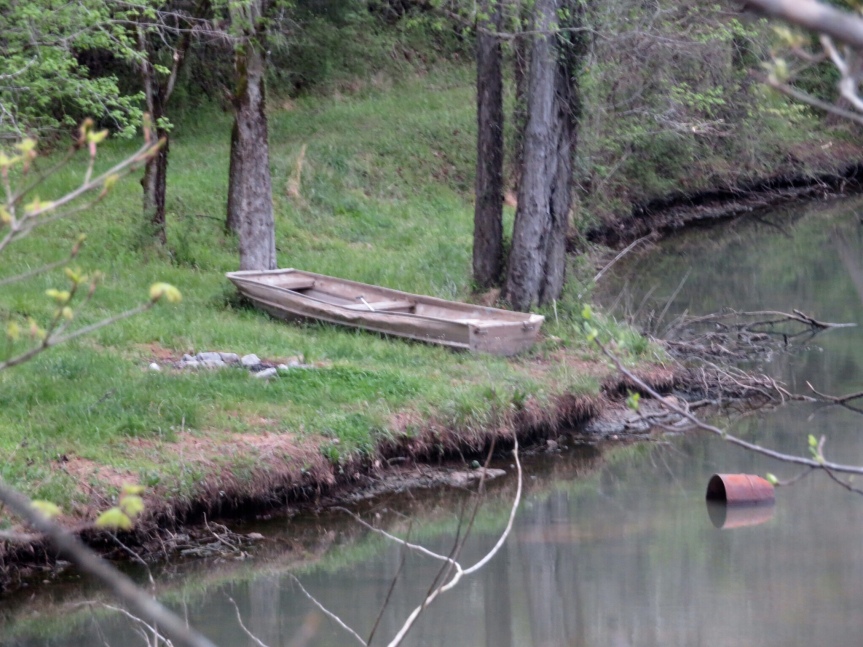 Back at camp, I cooked up some burritos for me and gave Cali some ground beef. PJ face timed just as I was rolling them up so she got to watch me eat while we rehashed our days. Called my friend Phil over in nearby Russellville and set up a lunch rendezvous over by his place for tomorrow. Watched a little t.v. as the volume started increasing from the campers next to me. I was hoping for more rain, and I wasn’t disappointed. It started coming down steady at around eight and didn’t let up for the rest of the night. That didn’t mean that they moved inside. Oh no, they were all seven of them huddled under the awning chatting away in loud voices but the rain muted things nicely and I was able to relax. 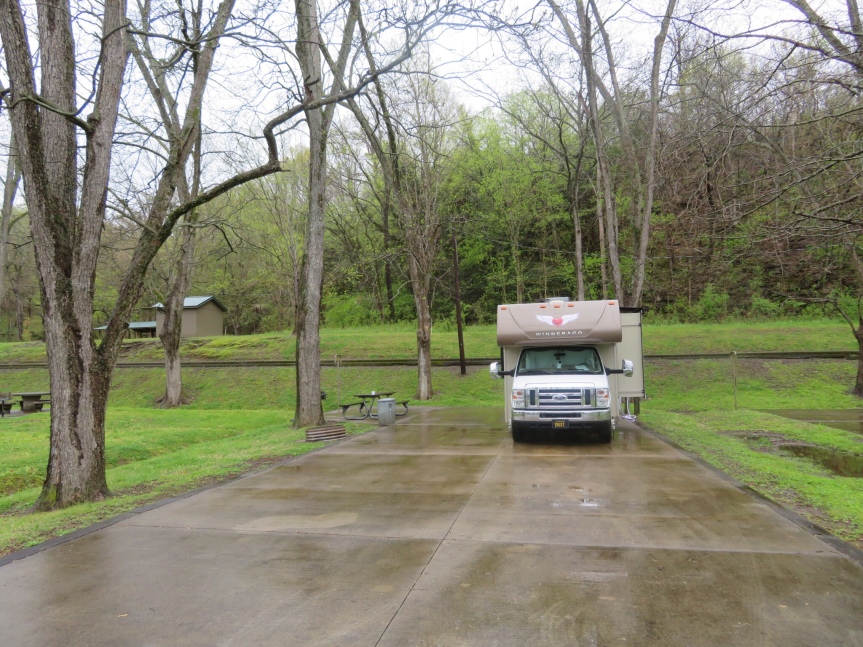 Got in bed around 10:30 and started writing this diary. My hip implant felt like a tight ball and was giving me some discomfort. I started having anxiety realizing that this is irreversible. There’s no turning back if I don’t like it. You can’t pull this foreign thing out of my body and glue the sawn off bone back on. I did some slow breathing then got up and did my hip rehab exercises. If I’m going to have this thing, I might as well make it the best possible. After a while I mellowed out and finished writing. Rain’s still falling lightly and is supposed to continue until early morning. It’s been a nice lazy day.