We were up early with the dogs barking and toddlers squealing. After taking Cali on a marathon trek down the bike path towards the point, PJ sat out at the picnic table making phone calls to family and friends. I played some guitar and when she returned I put together some deluxe omelets for brunch. Just after noon, we unhitched the bikes and took off to explore Emerald Isle. We exited to the left and followed the bike path out to land’s end past the Coast Guard station. There was a long wide beach where vehicles are allowed to drive out on the sand. This is the very end of the Isle with the Atlantic on one side of the point and the intracoastal waterway on the other. A sunny Thanksgiving drew a large crowd of visitors, fisherman, tourists and local families just out for some fresh air before stuffing themselves with turkey.

On the way out to the point, we had passed the entrance to the Emerald Isle Woods. Our curiosity was piqued so we decided to check it out on the way back. The gate was locked but there was a gap for pedestrians on the side so we squeezed in there. A large park of trees and swamp with frisbee golf stands scattered throughout. We had the preserve to ourselves except for a father and son duo challenging each other with their frisbees. We rode through the trees to a small trailhead that led out to a wooden boardwalk that crossed over the swamp to an opening in the marsh grass where locals launch their kayaks. Quite a few kayaks were out at the trail’s end locked up on racks waiting for their owners to take them out on the water. 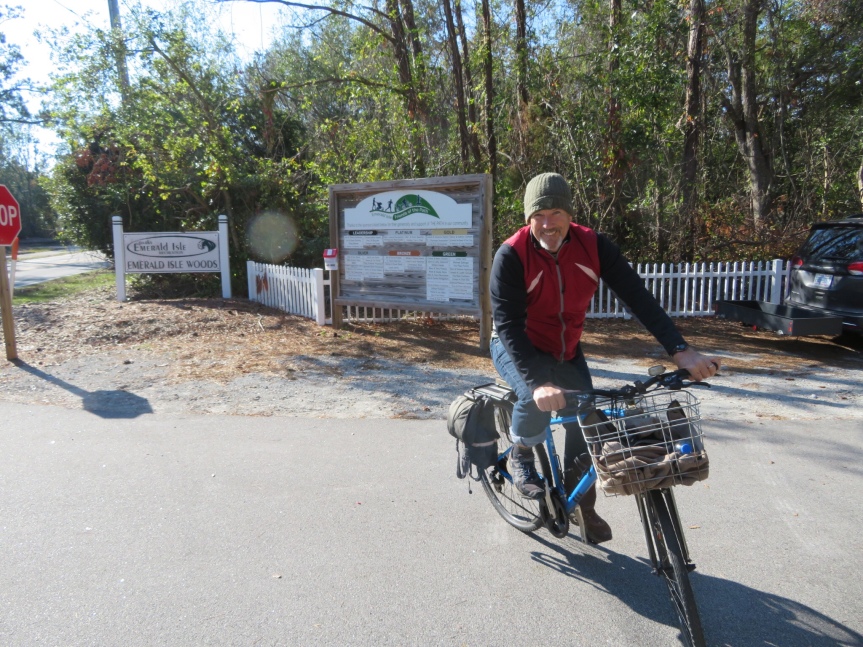 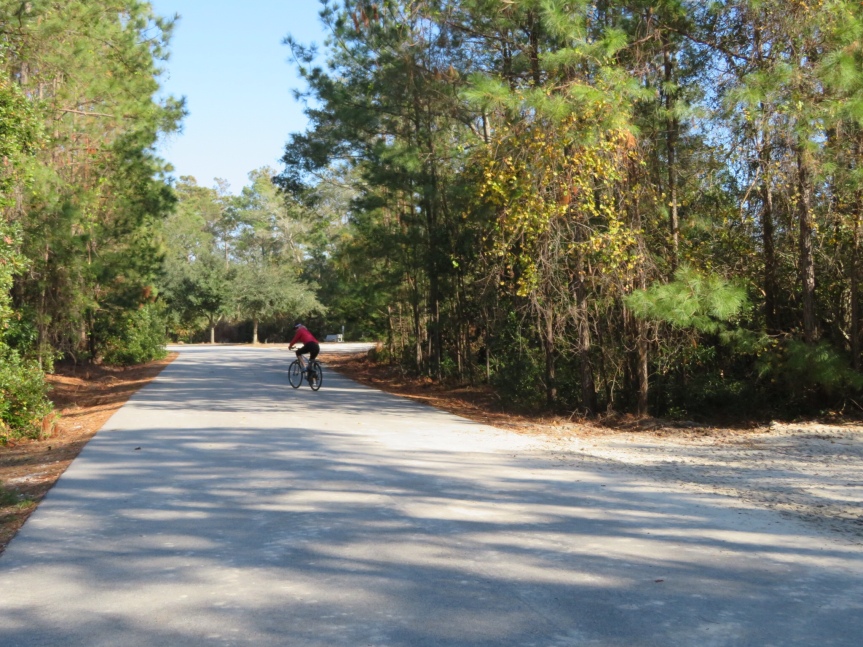 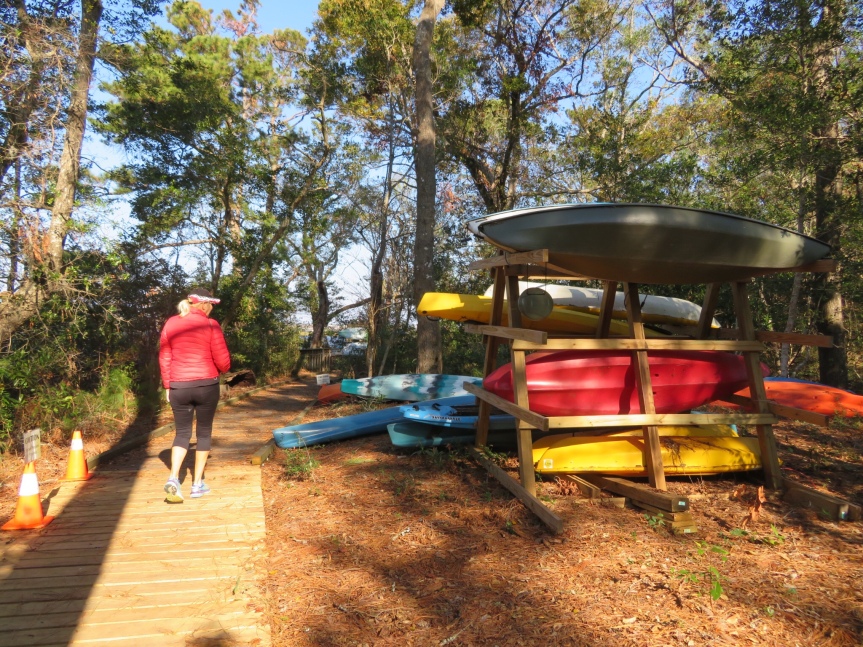 We pedaled along, back past the campground and into town where we took the right hand turn down to the Bogue fishing pier. Fisherman were out in force casting their lines hoping to add a fish option to their Thanksgiving menu. We saw a lot of fish getting caught, just none of them quite big enough to keep. Young lovers were strolling arm in arm, families were sharing lunch on a bench and we were winding our way through the throng laughing and taking pictures. About half way out the pier, it is closed off with a sheet of plywood where hurricane Florence had torn off long sections of the planks. We sat on a bench out of the wind and watched the small, rolling surf lap up against the pilings. We had been cycling around for close to three hours so it was time to head home and warm ourselves up. 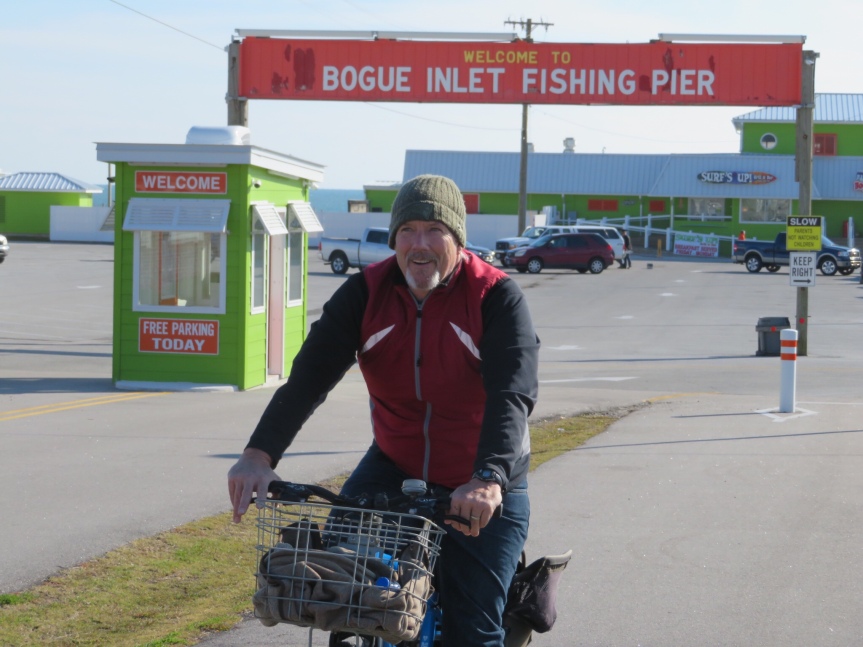 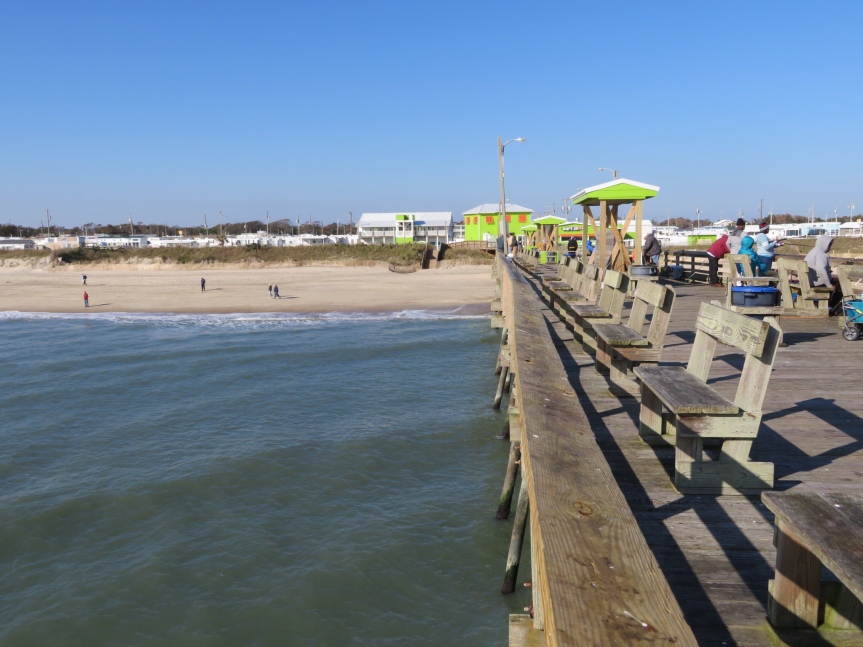 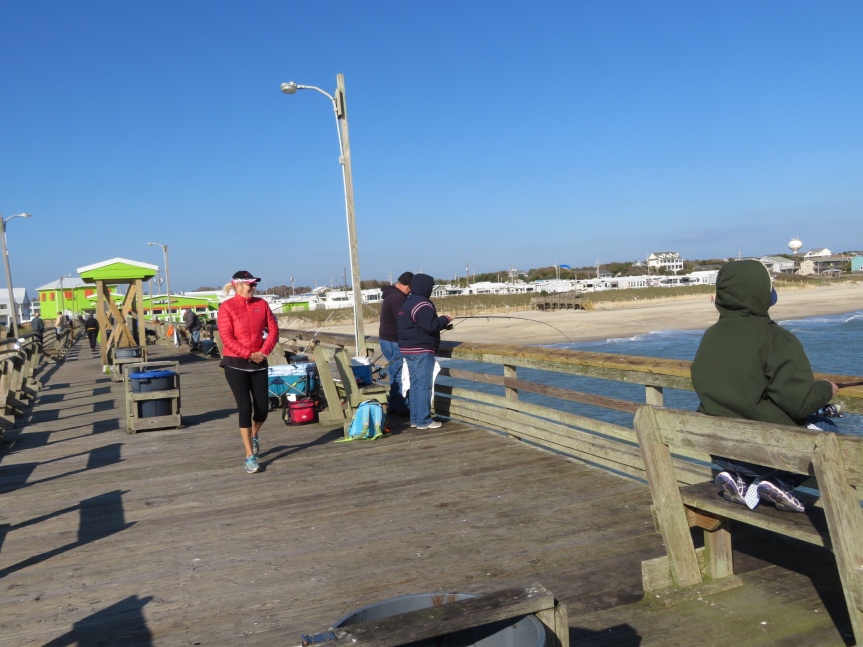 It was a relaxing afternoon. Some of the kids from the camp across from us were going entrepreneurial on us and trying to sell various items they’d collected from their RV. “We have a store”, the young salesman told PJ. She ended buying a well used DVD, the Santa Clause, from him. He wanted a quarter but she negotiated the price up to two dollars. Always a hard nosed haggler. We cooked up a Thanksgiving dinner with stuffing, mashed potatoes, and salads. My main course was sliced chicken breast while PJ had vegetarian soy chicken slices. We gave thanks and enjoyed a tasty dinner while a newly arrived family from Virginia set up camp in the spot behind us. We topped it off with pumpkin pie and a little football on the t.v. Happy Thanksgiving to one and all. Hope you all had a great day and good times with family.