After a leisurely morning having breakfast al fresco and sipping hot beverages in the South Carolina sun, we embarked on a day of non-stop activity. Our first scheduled stop was the High Noon group over at Trinity Church in Surfside but as we were merging onto the South Kings Highway PJ spotted a good sized turtle trying to make its way across the busy four lane road. We quickly pulled into a left turn break in the road and I jumped out in an attempt to rescue the hapless reptile. Just as I was running up, a service van caught a corner of his shell and sent him catapulting and spinning a couple of circles. When I got up to him, he seemed miraculously unscathed. That shell really does the job. I grabbed him and ran back across the road to the small canal and set him back in the water. He seemed to sink and I wasn’t sure he was conscious inside that shell, so I pulled him back out and set him on the bank wishing him luck. Then we continued on the meeting. We even showed up on time.

Are you okay, little buddy?

After the meeting, it was off to do more mundane errands for the day. We made a stop at the Socastee hardware store for some items for the RV. Our behavior began to suggest that our blood glucose levels were dropping so we pulled into a Subway for some sandwiches. Their computers were down so it was cash only. Luckily I had a few bucks but their hand written ciphering was a little suspect. We paid it up anyway and chowed down. Having reestablished our equilibrium, we grabbed a couple of new towels and a mat at Walmart then headed back to the state park. On the way, we stopped to check on Tommy the Turtle to see if he had moved. Sure enough, he was chillin’ in the water looking a-okay. A happy turnout for our amphibious friend. 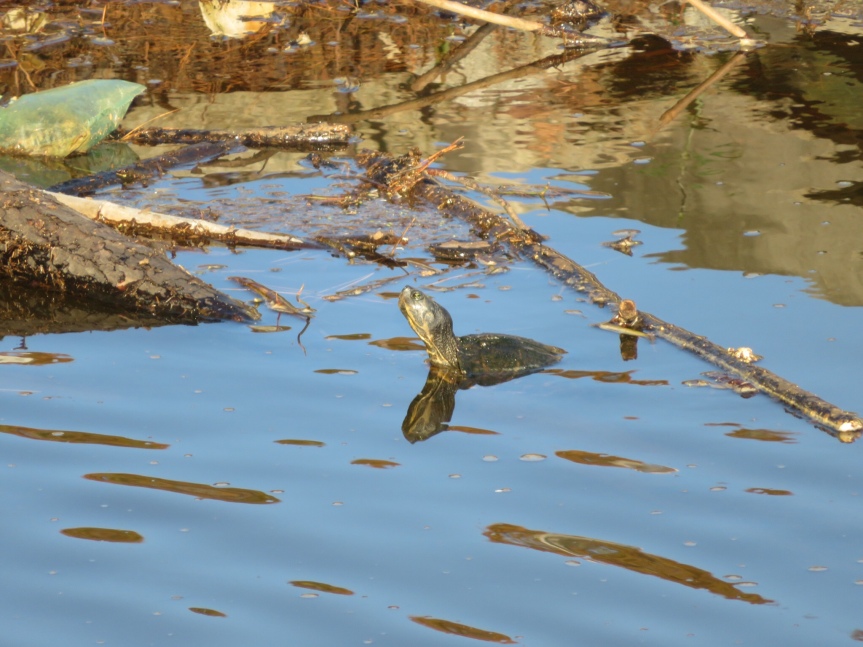 Sometimes stories have a happy ending

We parked at the beach parking area and power walked the beach to the south to have a look at an RV “resort” down the coast from our campground. Pirateland had some okay amenities but the spots were way too close and wide open. We wandered around for a few minutes until PJ stepped on some stickers and we hastened back to the beach and walked the shore back to MBSP. The sun was shining and it was a lovely evening.

Rather than rush back to camp, we made a stop at the pier and walked out to get a good view of the sunset. A few fishermen were giving it a go and some couples were enjoying the mild weather. As the sun was nearing the horizon, all of the pigeons from near and far arrived to line up on the railing and watch the sun go down. A picturesque scene as the sky turned golden to the sound of flapping wings. Then it was back to Cali and to set up our mini Xmas lights that we picked up while out shopping. 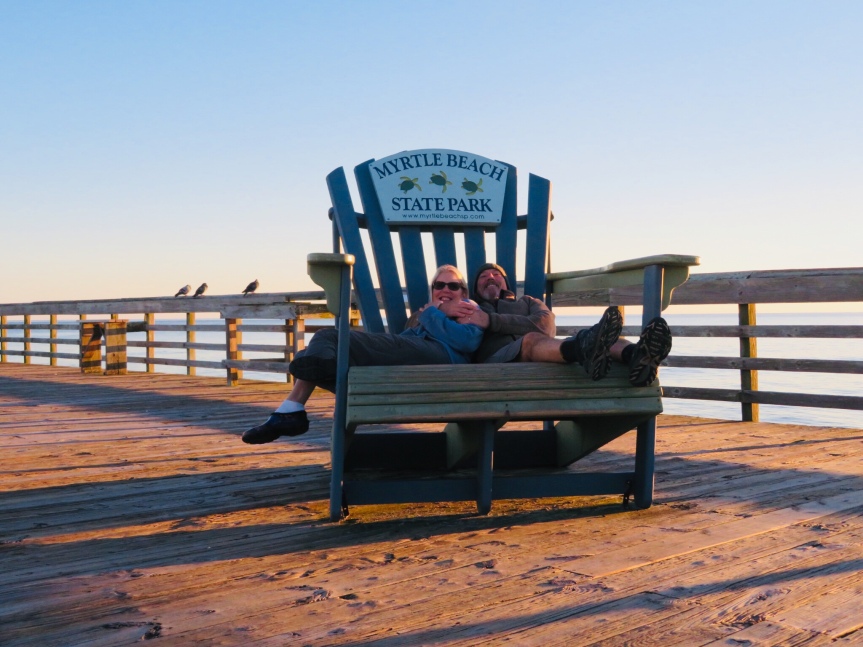 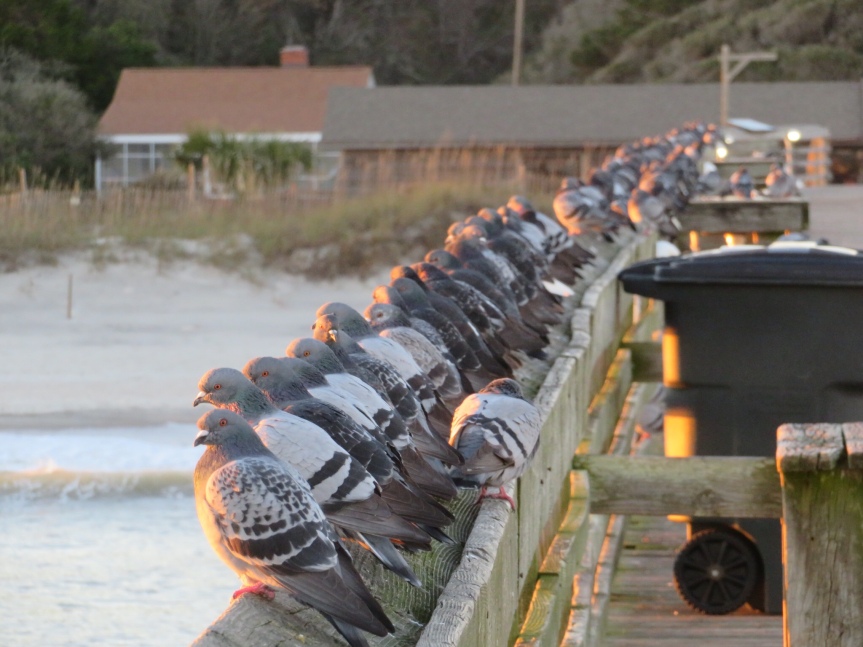 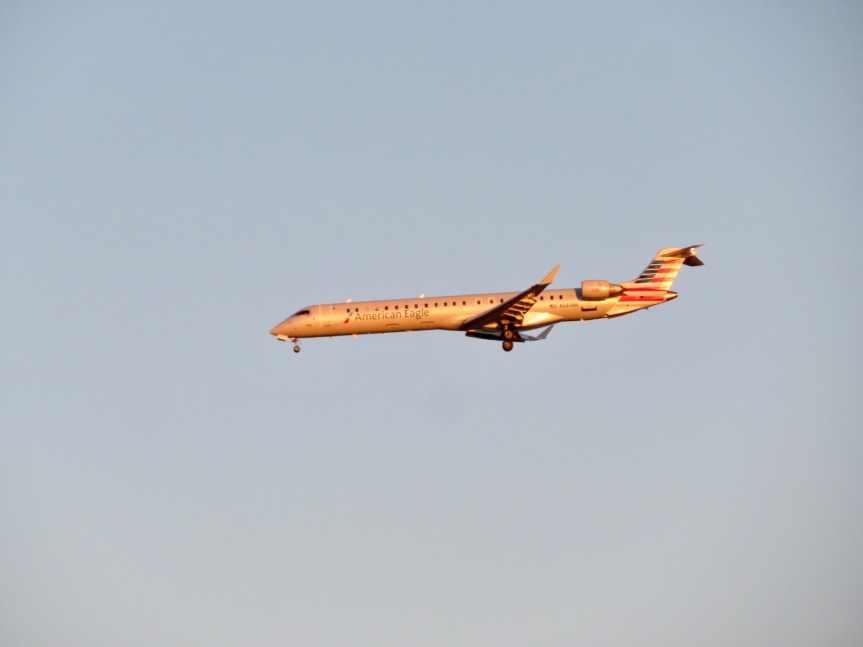 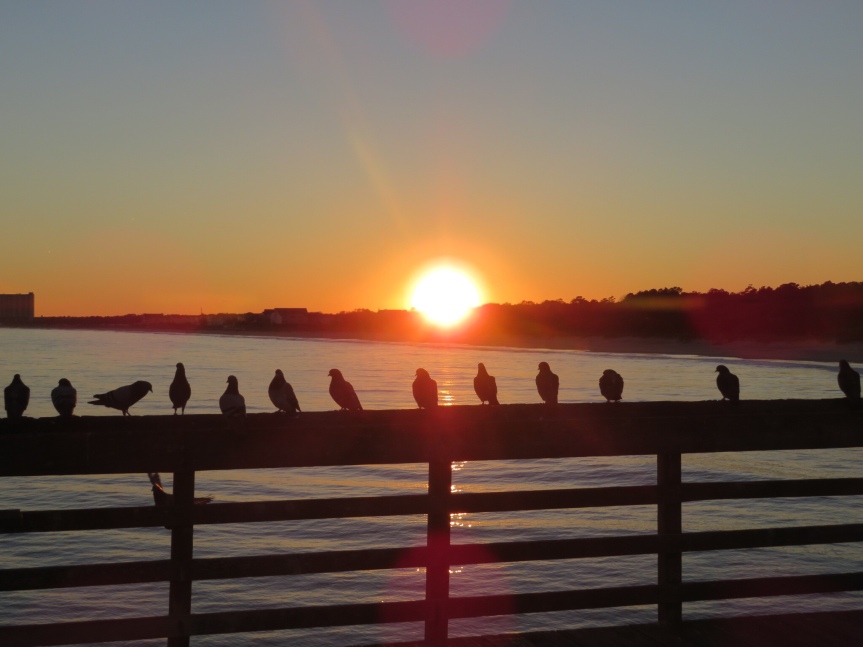 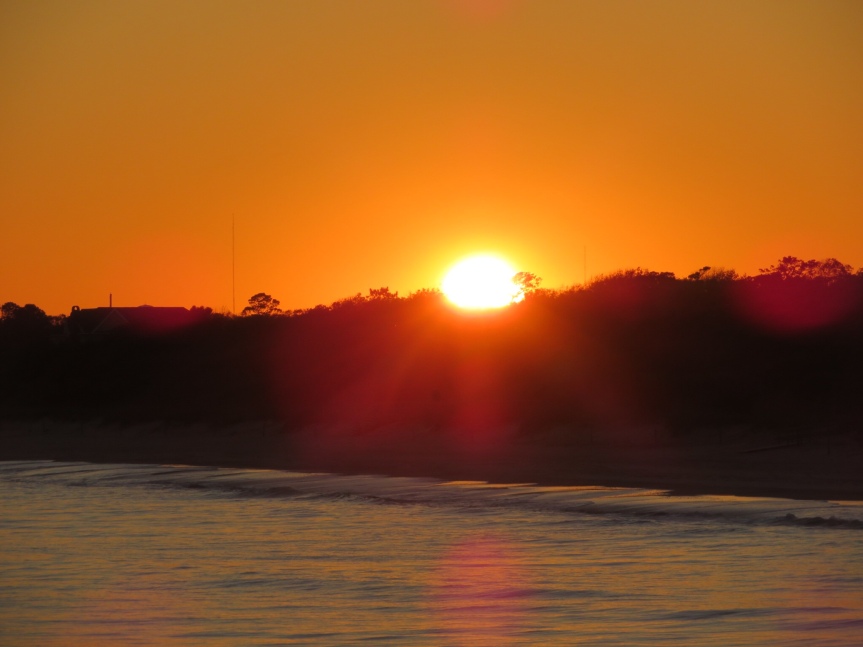