Another overcast day at the lake. We decided to begin the day with an AA meeting over in Caribou. Interestingly, it was held in a spot called the Bread of Life soup kitchen which is the same name as a place back home where PJ and I used to volunteer to feed the folks on the streets of Oceanside. It was a good meeting with a small core of locals then us and a couple of guys from Boston up for a wedding in town.

Afterwards, we went over to Hannaford’s for some more whipped cream and pizza dough. When we went to leave, the car wouldn’t start. I had been sitting with the key on to charge the phone while PJ went back in for a forgotten item and the battery couldn’t take it any more. The local guy in the pick up next to us asked if we had cables, but they are in the RV. He wasn’t going to leave us without getting us going. He began asking for cables while I ran across the street to the Shell station to see if they had any. They didn’t, but I ran into one of the Boston guys from the meeting. He drove me back over and called the other Boston guy who did have cables and he was bringing them over. When we got back to the car, the Good Samaritan had found a set of cables and we hooked them up but the car still wouldn’t turn over. Our friend left to get ready for his son’s wedding and we kept running the gentleman’s truck to build up enough charge to hopefully start it up. We had a small crowd cheering us on and after several attempts and patiently waiting, the car finally started up. Mainers all the way, it became their personal mission to get us greenhorns back on the road and they did just that. Hat’s off to the people of Caribou. 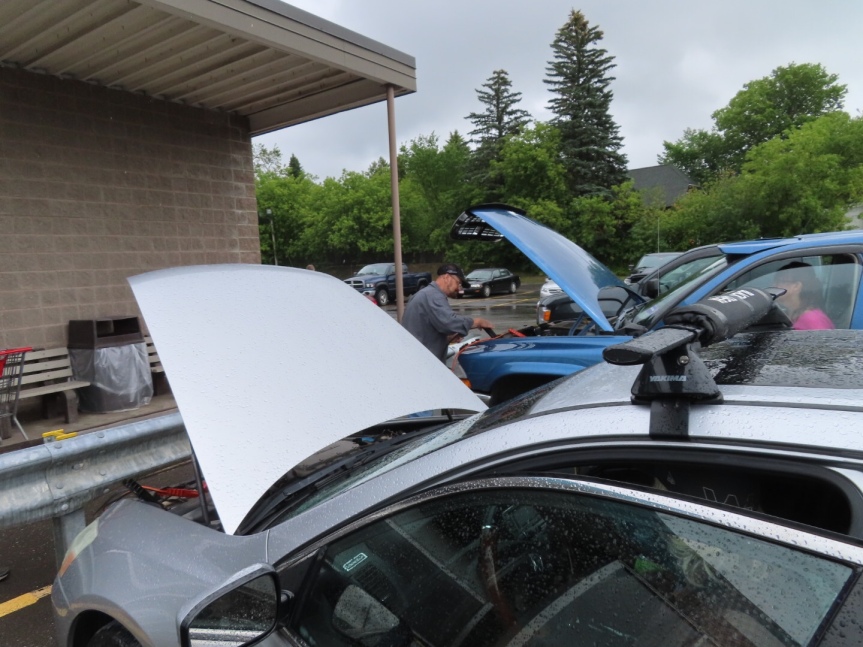 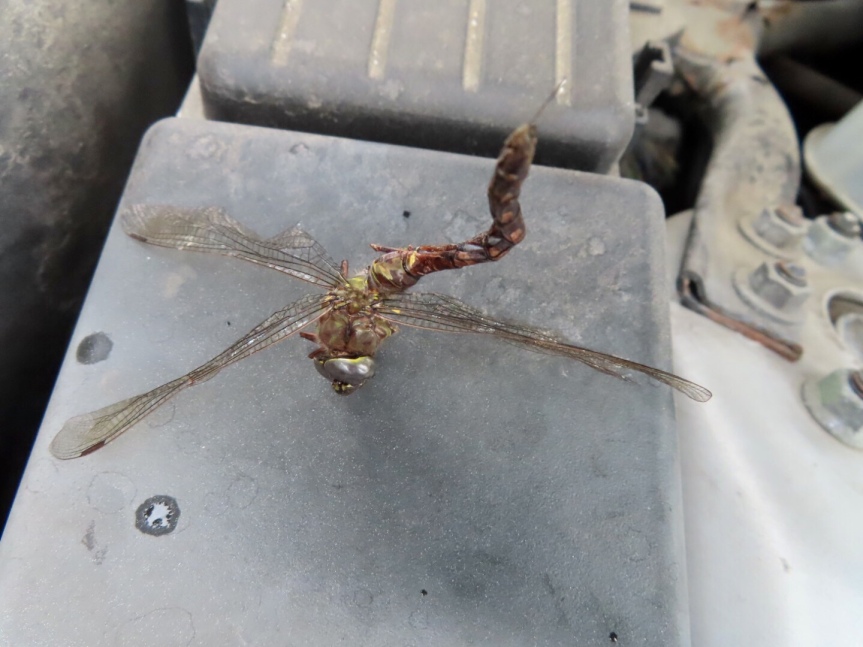 I drove straight to Napa Auto Parts and the young man brought his electronic gadget out and tested the battery and it said “you should have replaced this a long time ago” on the little screen. Not really, but it did say something close, so we bought a good battery and I installed it in the drizzly parking lot so I could turn the core back in for the deposit. They loaned me the wrench and we were switched out in a short time and hopefully good for another 100,000 miles.

We tried to find a Caribou sweatshirt for PJ but without any luck. One store, Sleepers, had a small selection but none of them made the grade for my wife’s discerning taste. We thought to try the museum store in New Sweden as we drove back, but they had closed long ago at noon while we were dealing with the car. We did a quick stop at the Gustav Adolph Lutheran Church where the family has deep roots. One of the stained glass windows was dedicated in memory of Pam’s father by his sister’s and brother’s families.

I took a long nap when we got back then got out for a paddle across the wind ruffled lake. It was good to get a bit of exercise then jump in the lake for a solid wake up from the cool water. I had volunteered to make the short cakes for the blueberry dessert for tomorrow’s festivities so Laura set me up with the ingredients and I mixed up the dough then cut it into little wedges to bake up for the base of the cakes. 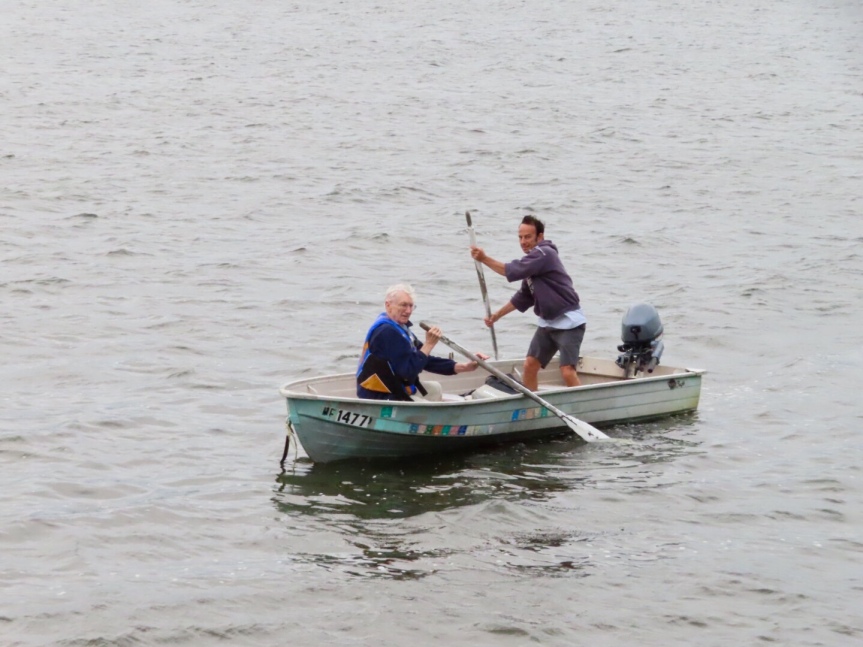 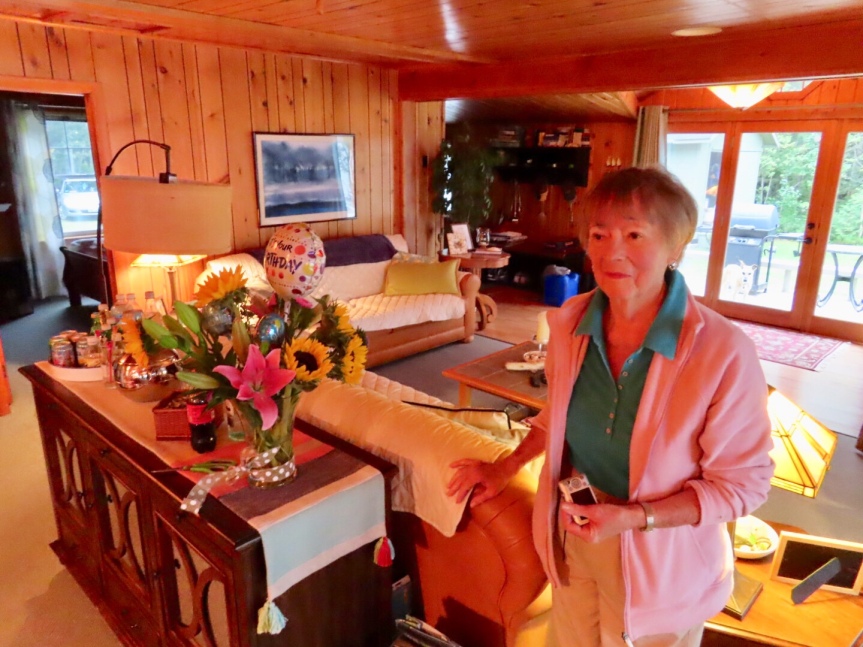 Next, Laura, PJ and I spread out the ingredients for pizzas and got them baking for dinner. Martha and Graydon arrived and we sat and talked around the table. Lance and Graydon decided to take the boat for a spin around the lake while we put the finishing touches on the pizzas. The wind had settled down a little bit but the sky still threatened rain. We were munching on pizza and chatting when Lance’s sister Kami and her boyfriend Jim arrived bringing along Lance and Laura’s daughter Rachel who they had picked up at the airport in Bangor along the way. They had embarked on a ice cream testing adventure stopping at three different creameries on the way up to decide who has the best in the northeast. Lots of catching up and family talk until it was time to catch some zzz’s. 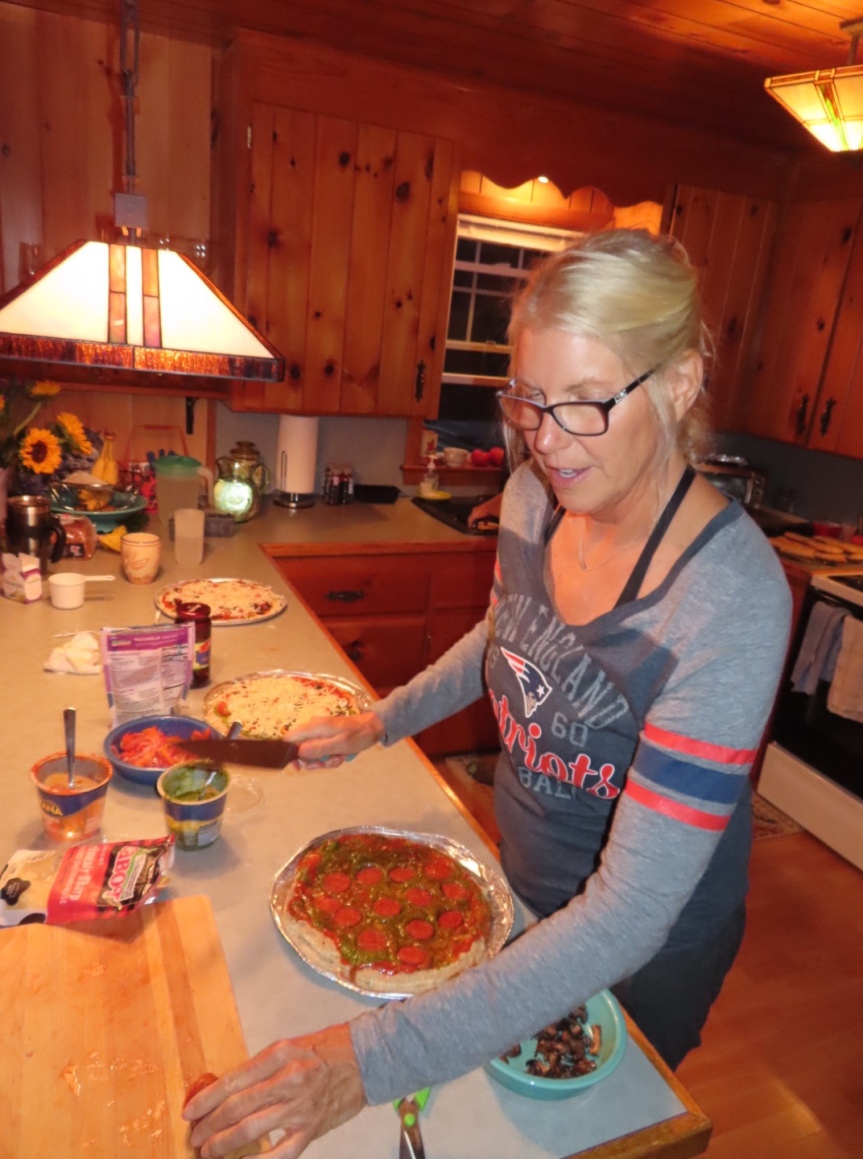 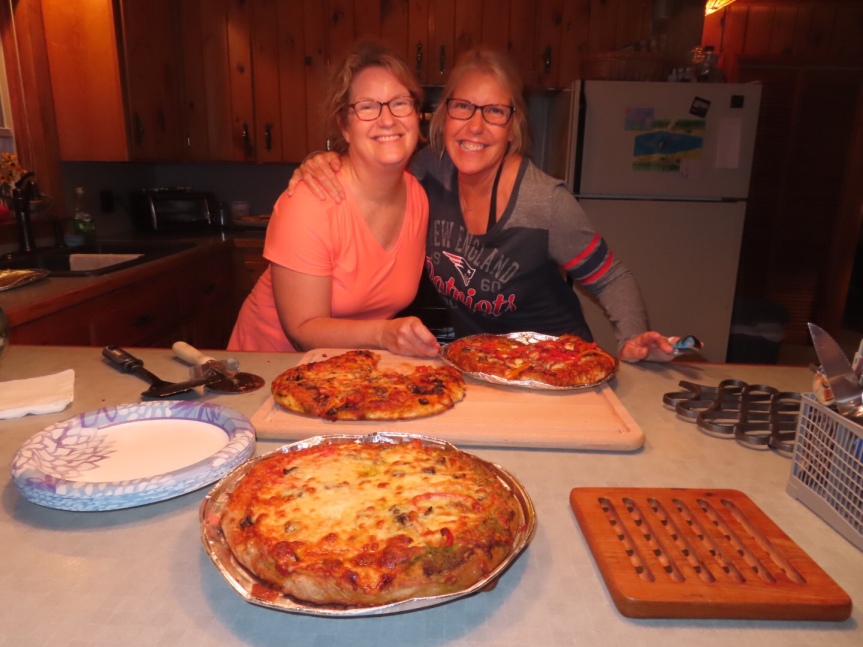