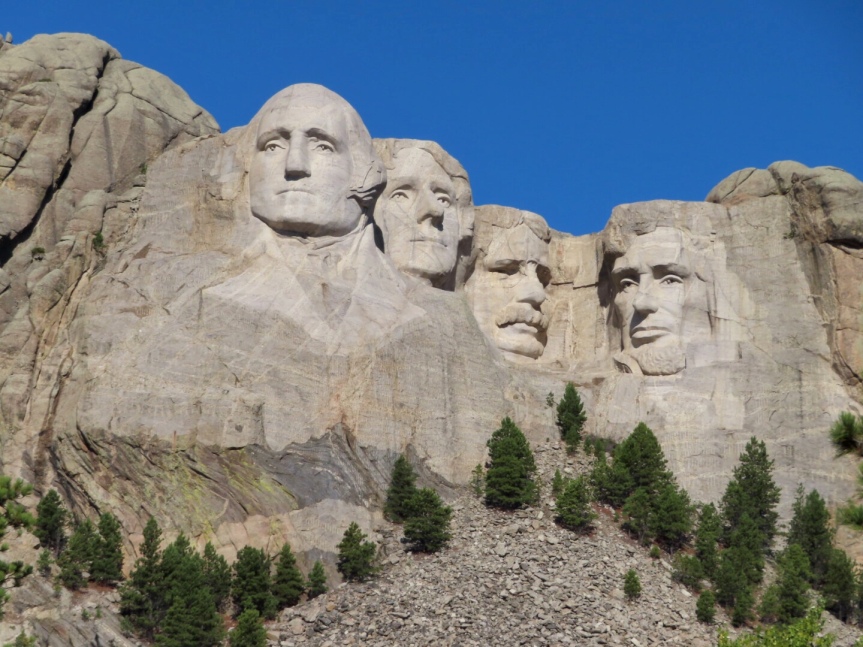 Another early start today as we had packed a lot of activity into our morning agenda and the park check out time is noon. We were headed back to Mount Rushmore today to see if we could get a glimpse of the fabled sculpture. To drive there we opted to take the sinuous narrow road known as the Needles Highway. There are three narrow and low cut, single vehicle tunnels to pass through along the route.

The morning was even colder than yesterday. Patches of ice were on the road and frost covered the ground. PJ momentarily lost traction on an icy bridge and got a bit of a rush, as for a brief second, the car took its own course of travel. The Needles rock formations were amazing and the views were breathtaking.

Guess where the shady spot was 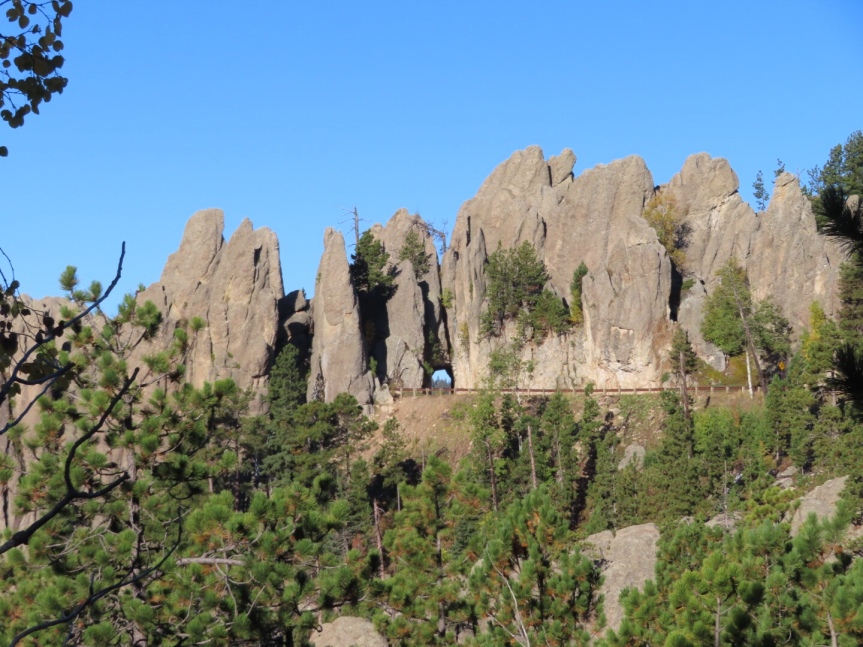 Chipmunks ruled the rocks. The sweet little buggers were everywhere scurrying up and down the boulders, munching on the plants and occasionally just relaxing on a log to take in the view themselves. We stopped often and walked along the roadside getting better angles to enjoy the scenic vistas.

PJ and I had a tussle over the camera since I’m such a camera hog and she had some ideas of her own on how she wanted to frame some shots. In the end, we both won. We ended up with some interesting photos and had over 400 to sort through at the end of the day.

We reached Mount Rushmore and our entry from yesterday was good for today also. The skies were clear and, yes, there actually are carvings of four presidents up on the granite walls of South Dakota’s Black Hills. There was a moderate crowd of tourists like us, but they just added to the energy of the visit. Parking was easy and the vibe was very upbeat. After admiring the intricacy of the artwork, pondering the planning and foresight to get it so perfect and getting an infusion of national pride, there’s really not much else to do. We spent maybe 45 minutes and are really glad we made the effort to come back this morning. 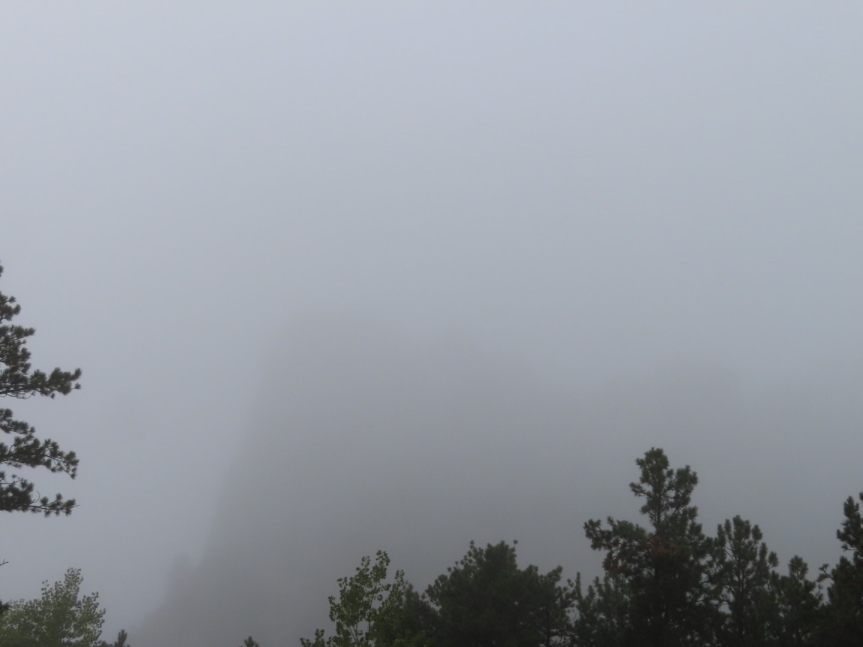 By now, the temperatures had reached a balmy 37 F, so what else is there to do but go paddle boarding? We drove over to Sylvan Lake. Not the largest body of water in the park but one of the most picturesque. Boulders rise out from the deeps and form a wall along the far edge of the lake creating a dam that holds the lake in place. We put in on the shore near the small dock and stroked our way down to the dam. 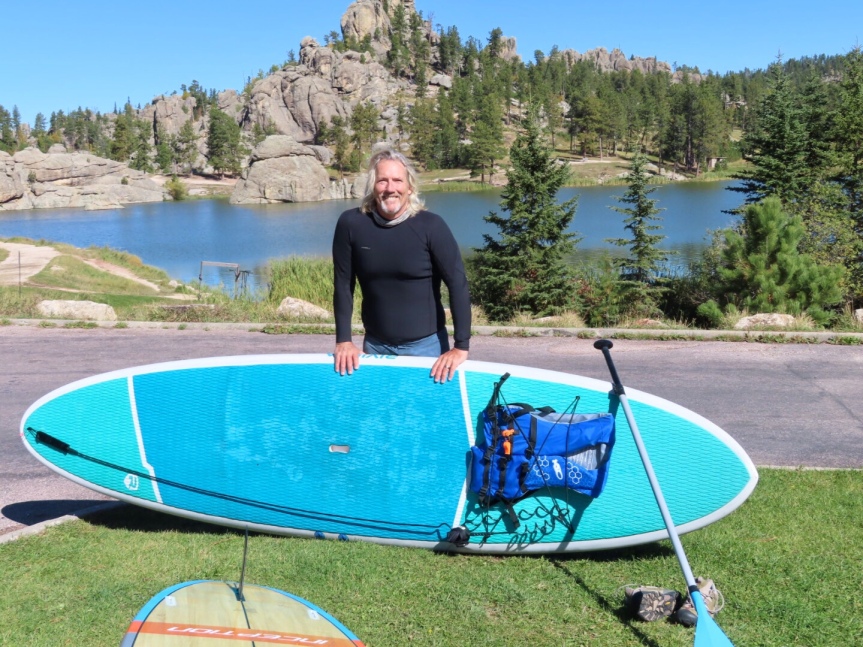 Luckily, the water was a few degrees warmer than the air, but it would still be refreshing in the extreme should you lose your balance and fall in. Some of the protruding granite outcrops form islands that you can paddle around. We circled around for 40 minutes or so then figured we had better go check out of the campground. 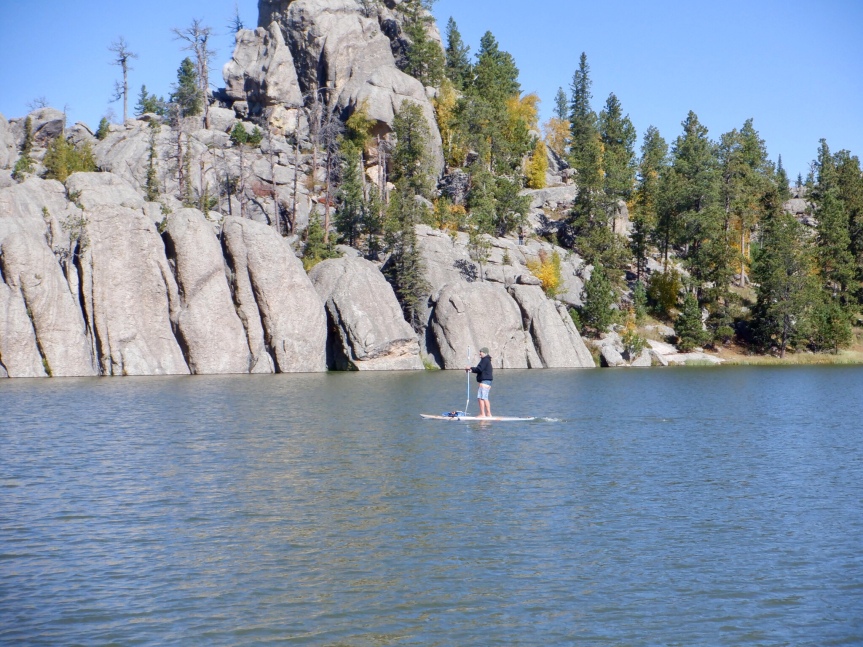 It takes some time to get anywhere in Custer Park. The roads were designed for viewing and exploring not moving around quickly. Although the campground was only ten miles or so, it took a half an hour to get there. We arrived ten minutes after noon and the grumpy camp host was hovering around on his golf cart getting all huffy that we weren’t out on time. Hey, the sign on your free site says ‘Camp Host’ not ‘Camp Dick’. We were in the wrong and freely admitted it and apologized, but there are better ways to interact with your clients. Everything was already packed and ready from this morning so it was just a matter of starting up the rig and driving out. This guy definitely should find a job where he doesn’t need to have contact with the public.

Another drive through the cute little tourist entry point of Custer. They have these fiberglass buffaloes spread around town that artists paint up and display on street corners or in front of businesses. They have bears like these in New Bern, Carolina and fish in Detroit Lakes, MN. I’ve always appreciated them and we spotted quite a few on the way through town.

We were soon in eastern Wyoming, lots of bare looking rolling prairie with lots of heavy mining and oil extraction. Straight highway with not much change in scenery over the miles. Put it on cruise control and sit back. A few small outposts of junk cars and abandoned trailers. Mile long trains with cars filled with coal chug eastward running parallel to the highway. 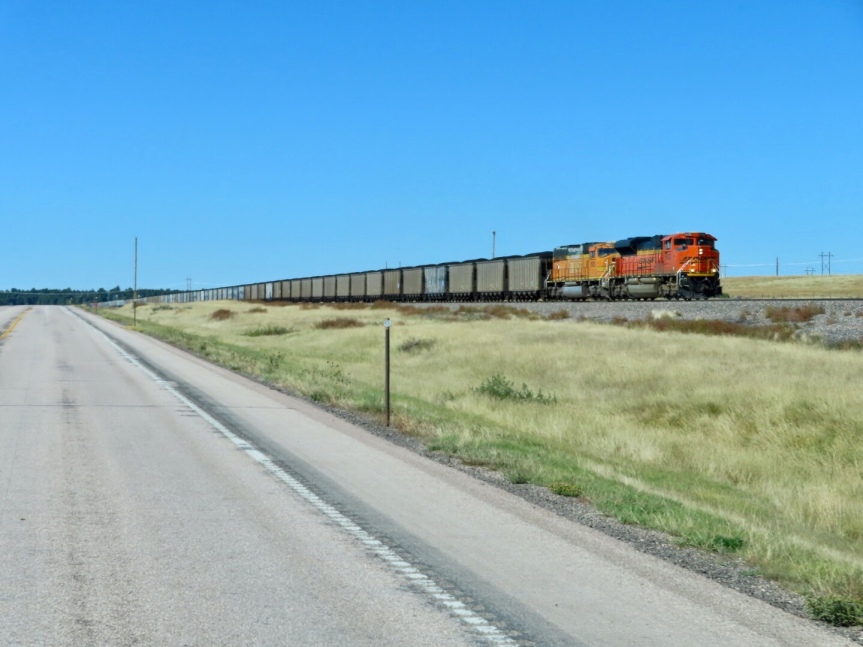 In Upton, there is a large facility to mine Bentonite, a clay used for things as diverse as lipstick to kitty litter. The coal mining near Gillette had a gnarly looking pit of despair hollowed out next to the road. Kind of what you’d envision hell to be like, just ignite a few of those chemical laden ponds of tailings to add the flame effects. A few antelope loitered near the fences grazing on the plentiful grass and watching the traffic go by. Deer hunting season must have just begun as trucks were parked up along the roadside and guys in neon orange beanies were roving over the rolling hills. One lucky hunter was emerging onto the shoulder with a large buck toted on his back like an oversized knapsack. 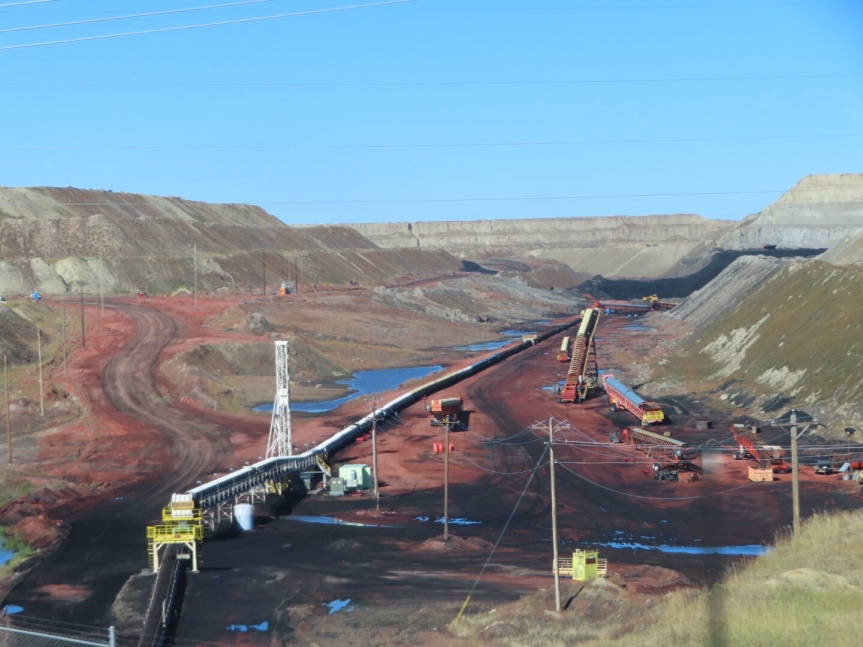 We crested a ridge and suddenly, in the distance, there appeared a line of snow covered peaks. It kind of took me by surprise. The Big Horn range lies just beyond Buffalo. We’ll be crossing over them tomorrow. We stopped at a pull out and had a break then took some photos. From there, it was a few more miles into the small city of Buffalo where we parked it up in the midst of the hunters all looking to fill their freezers come morning. There were as many orange beanies and camouflage get ups at the campground as we’d seen all day along highway 16. They say it’s not going to freeze tonight so go ahead and hook up the water. Mellow night sleep on the plains of Wyoming. 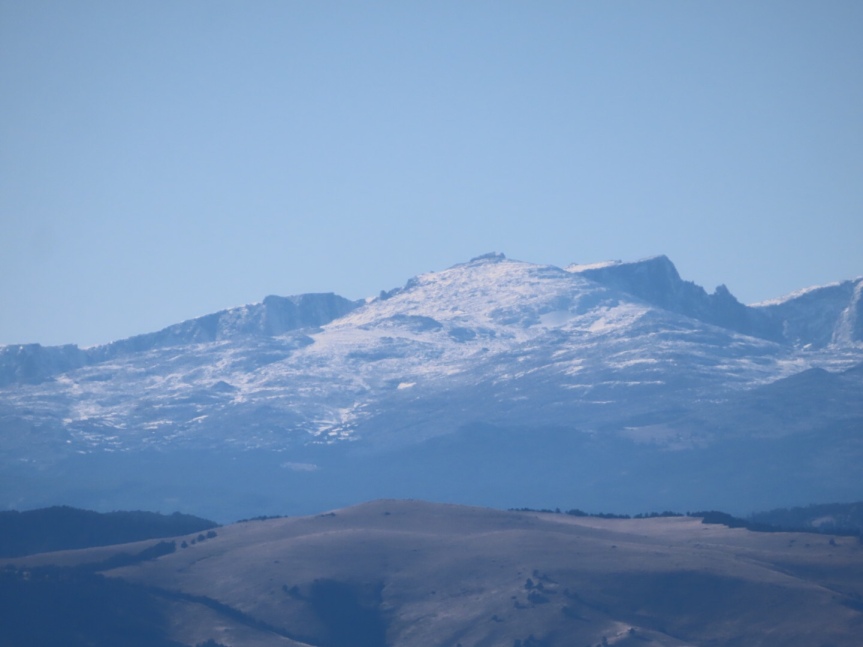