Sightseeing tourists, that’s what we are. We were out exploring Yellowstone by eight this morning driving first just the short distance to Gibbons Falls. We hiked the short trail to the overlook and gazed down the canyon at the water flowing over the rocks. Beautiful views in all directions. PJ brought the binoculars along and they really helped us see things up close. Another sunny morning hanging right around freezing until after midday. 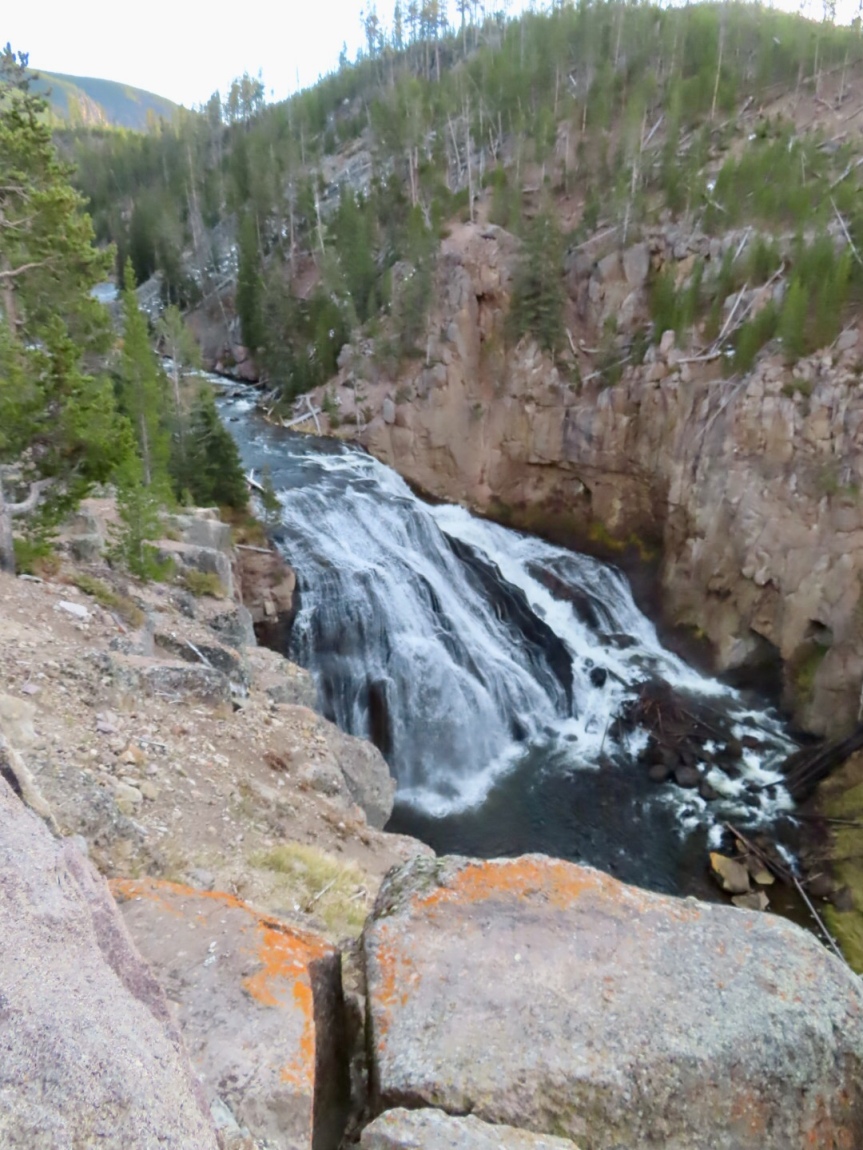 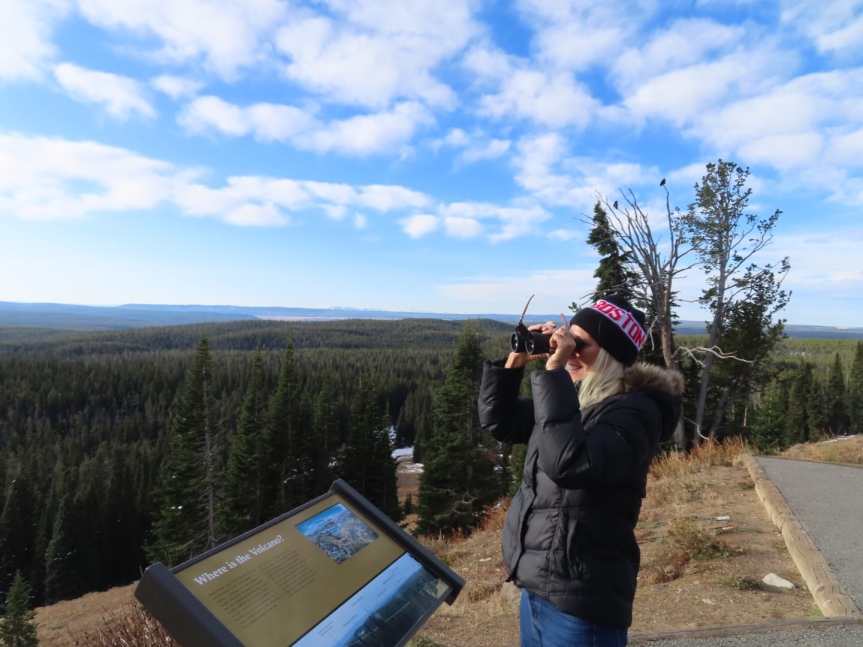 We drove through Canyon Village and turned up the road toward Tower because we wanted to head up to the Lamar Valley where there are supposed to be large concentrations of animals. We crossed over Dunraven Pass at 8859 feet through the snow covered forest to get to the valley.

As we neared the turn off at Tower, we parked up at the lot for Tower Falls and walked over to the lookout to see the falls. There is a trail that follows the rim of the canyon, touted as Yellowstone’s Grand Canyon. Amazing scenery and rock formations looking both ways down the long canyon carved out by the relentless power of the Yellowstone River. 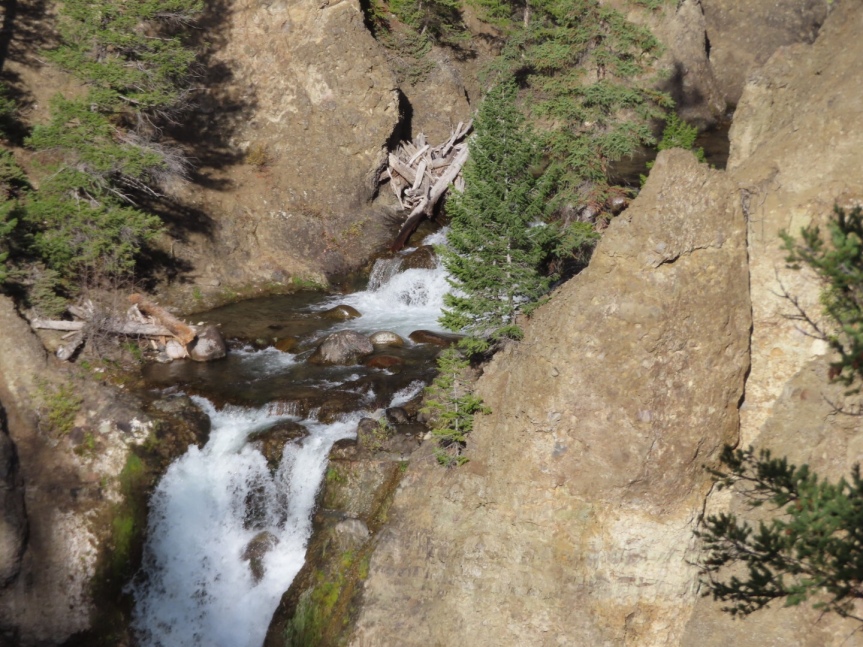 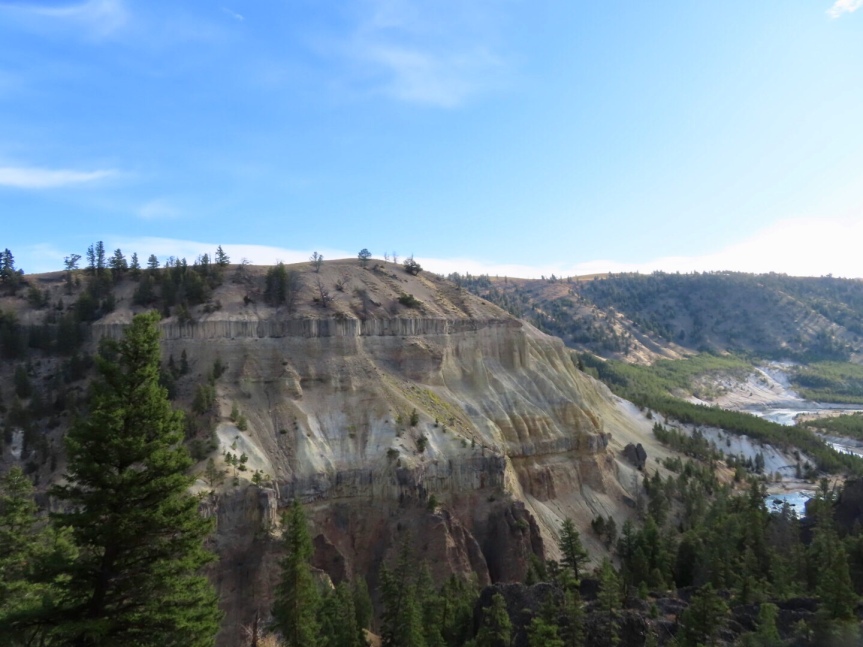 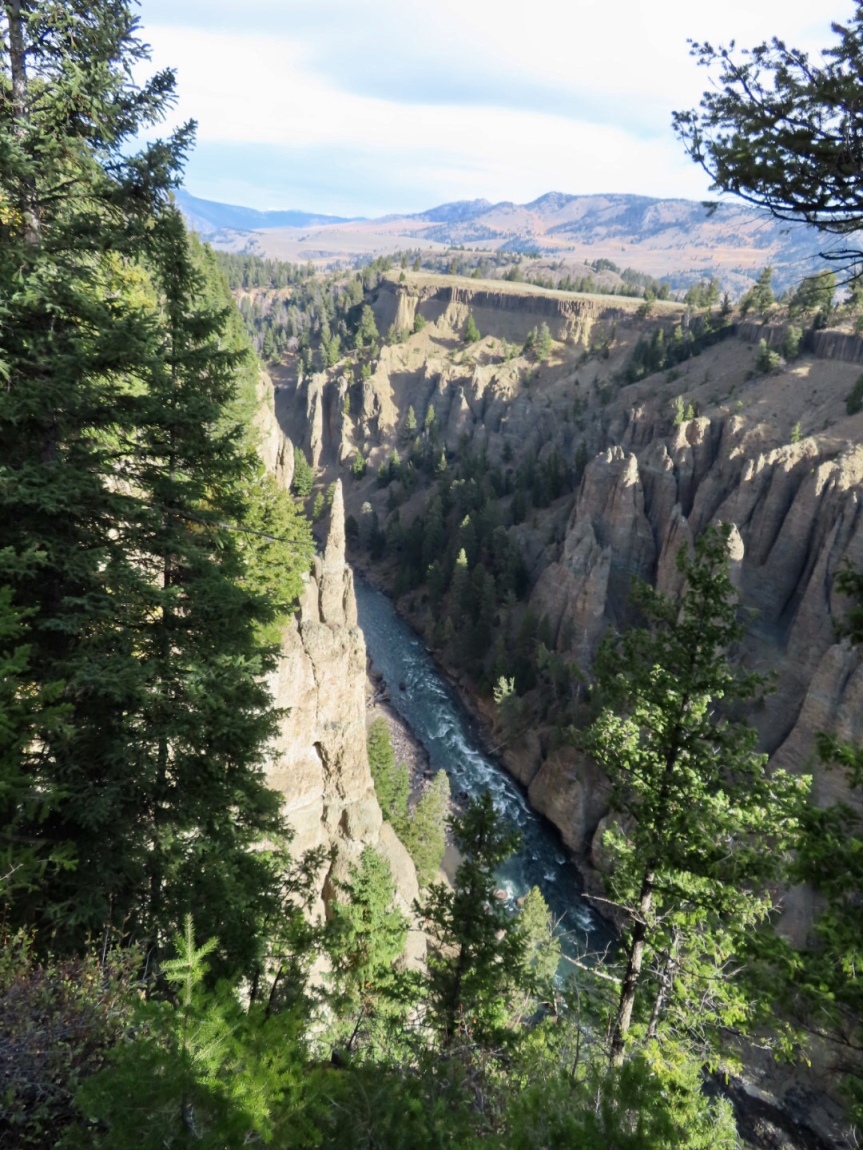 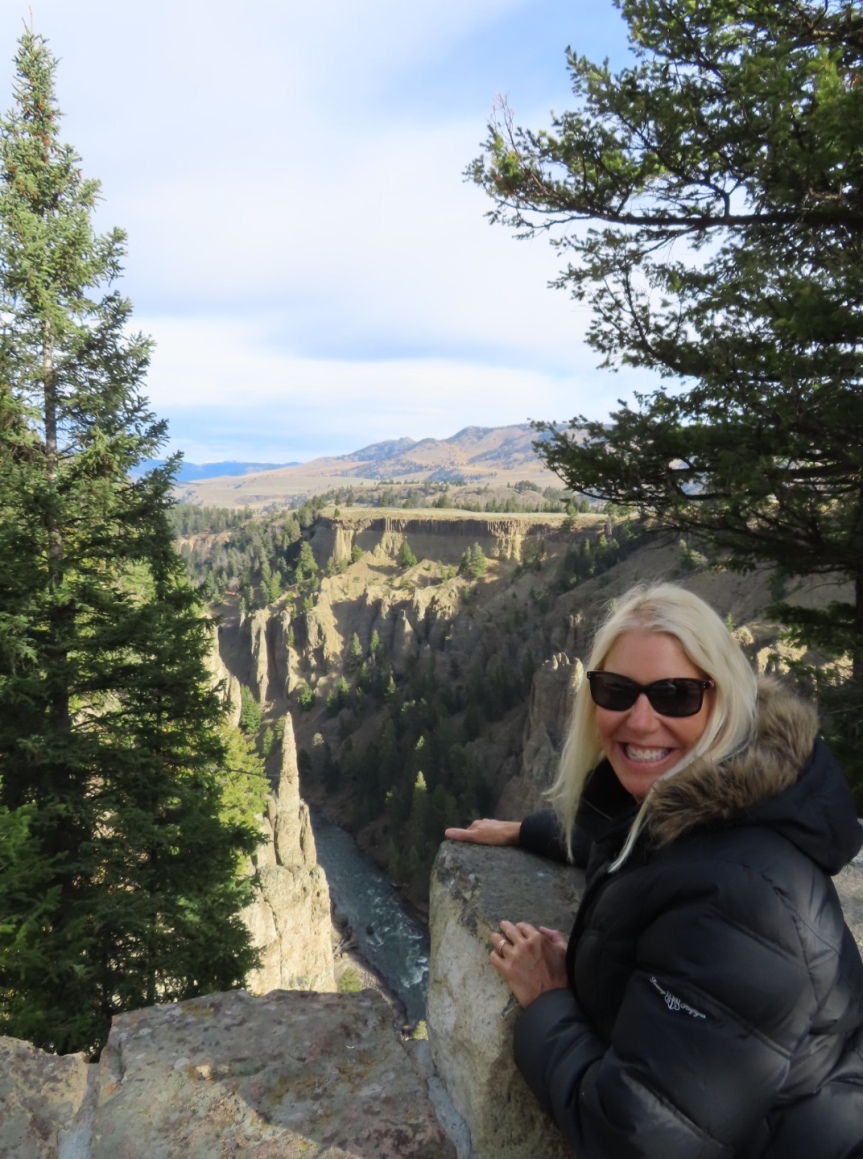 We made the turn at the Roosevelt Lodge and crossed the bridge at the Yellowstone River where fly fishermen were whipping their long poles to drop their lure in just the right position to attract the large trout that populate the river. Some young men were doing a survey of the river bottom using sonar equipped unmanned boats. We talked to them for a while before heading into the Lamar Valley. 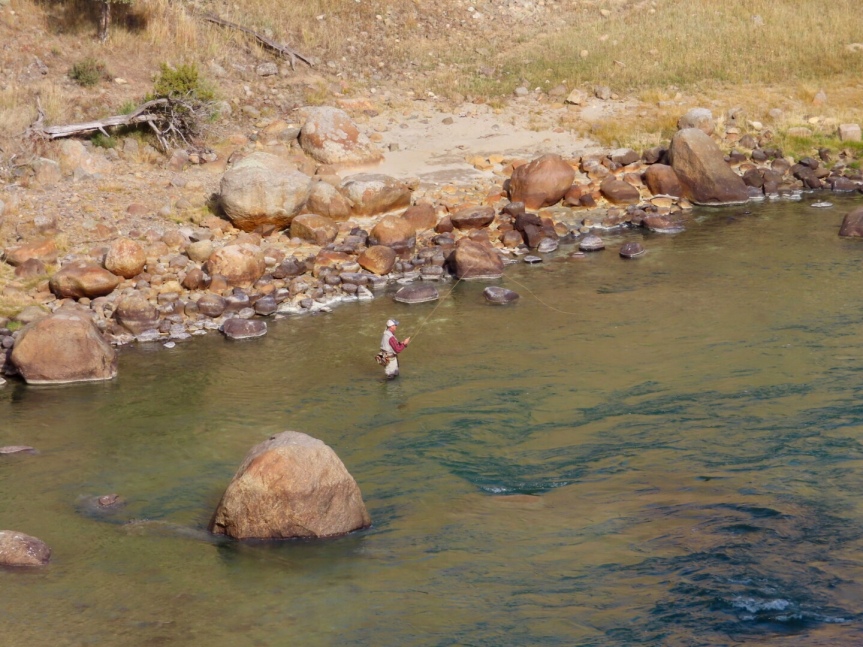 Herds and herds of buffalo. That’s what we found in the plains of the Lamar Valley. One large herd was gathered along the river with a large bank behind them that the bison would run down a steep ramp in the bluff to jump in the water and wade across. The mama buffalo would carefully lead the calves through the water safely to the shore on the side where we sat. We got comfortable on some rocks and watched for quite a while. 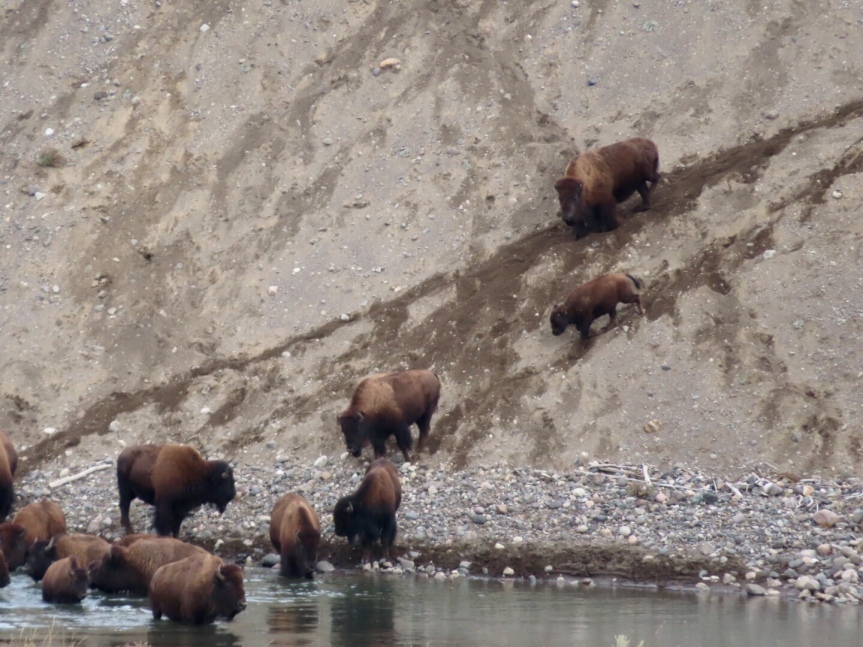 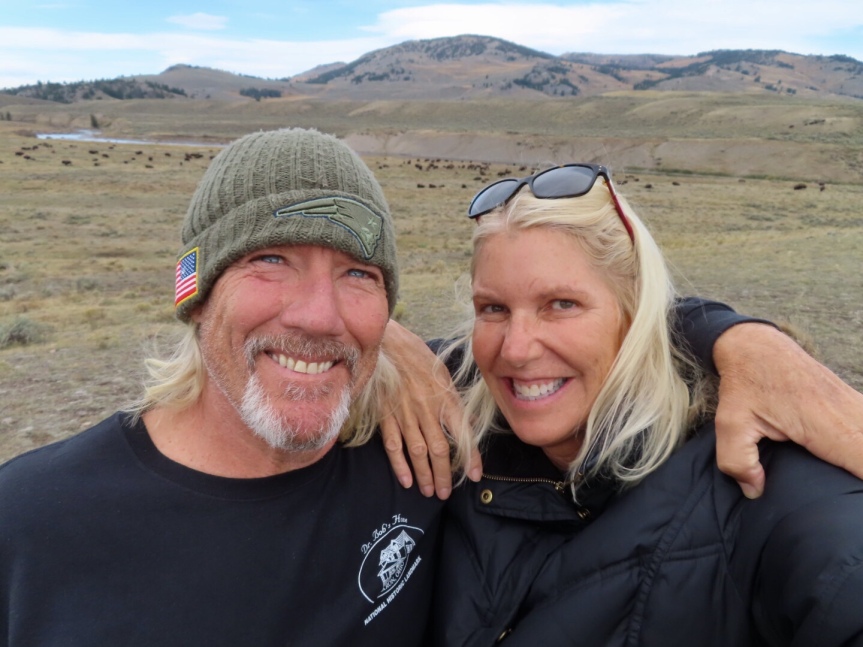 The young bulls were working on their fighting skills while the old dominant males rolled around in their buffalo wallows. The herd was large and just when you focused in on some interesting buffalo activity, another fight, run down the chute or calf frolicking would draw your eye to a different area. 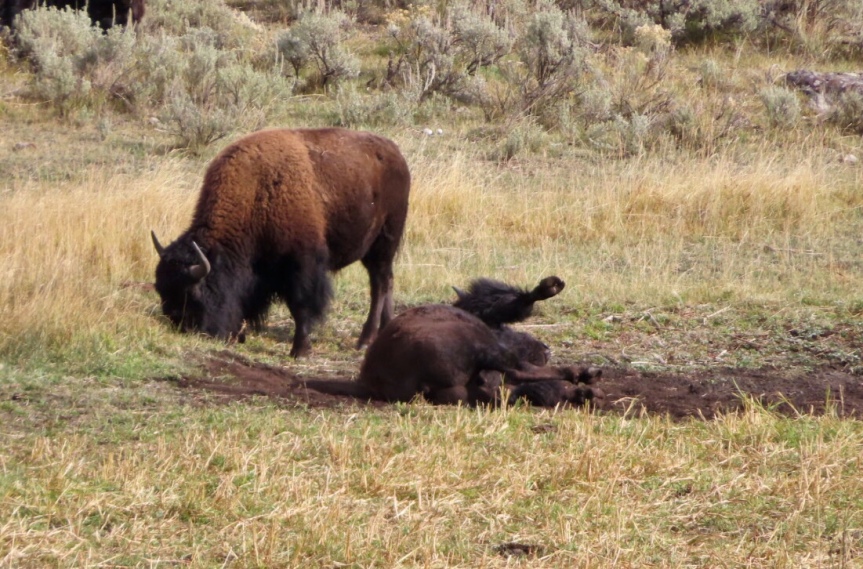 We went as far as Pebble Creek where we got out and walked down to the creek. No wildlife, but a couple of spastic kids kept us amused for a few minutes. Then it was time to backtrack and head for home to free the dog. Five and a half hours touring around. My eyelids were heavy on the ride home. Cali was glad to see us and we were glad to rest up a bit. The ranger in the kiosk when we arrived told us to use the showers down at Canyon Lodge so at four we drove over only to be told that no, Canyon Campground is closed, you need to drive an hour more up to Mammoth to use theirs. No thanks. We sat in the parking lot where we actually had some cell connectivity and I posted yesterday’s blog. 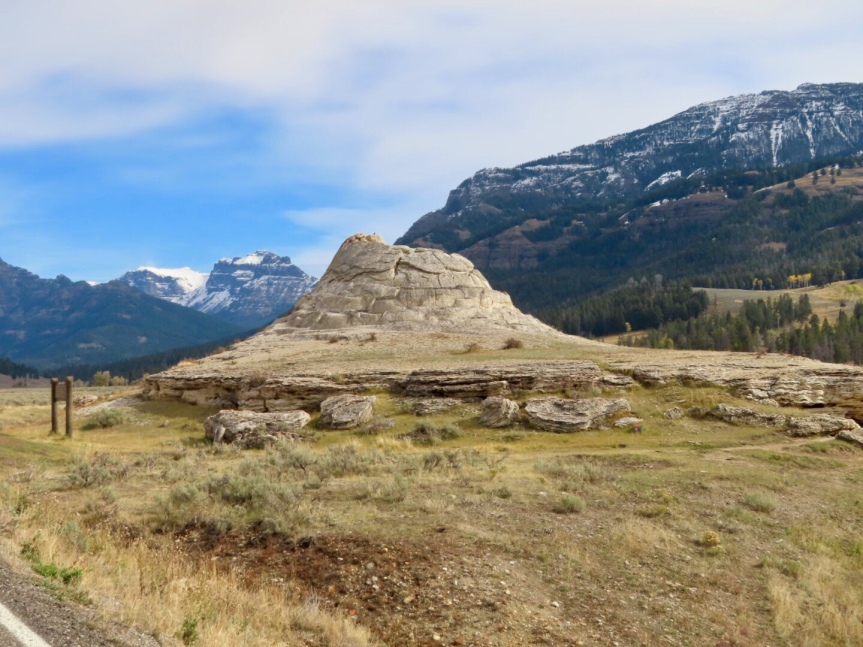 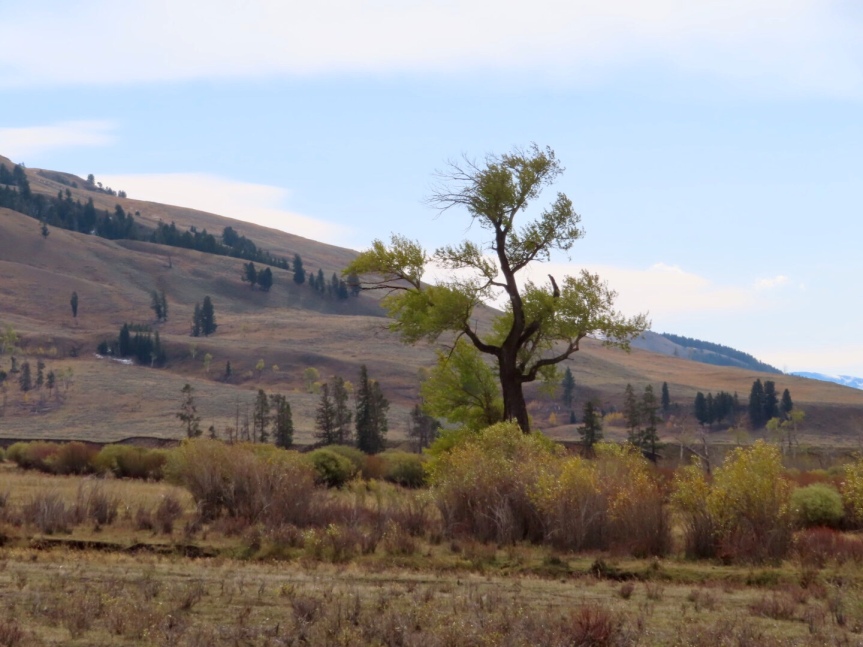 We drove slowly on the way back pulling over often to let the speedsters pass. We were hoping to find another bear. The big grizzly we saw on our first day was the coolest thing we’ve seen. The sheer power he exuded walking around was awe inspiring. But, it wasn’t to be. As the light faded, we nearly collided with a few errant buffaloes but no bears. As a consolation we got one of the most stunning sunsets over some of the most beautiful landscape on the entire planet. 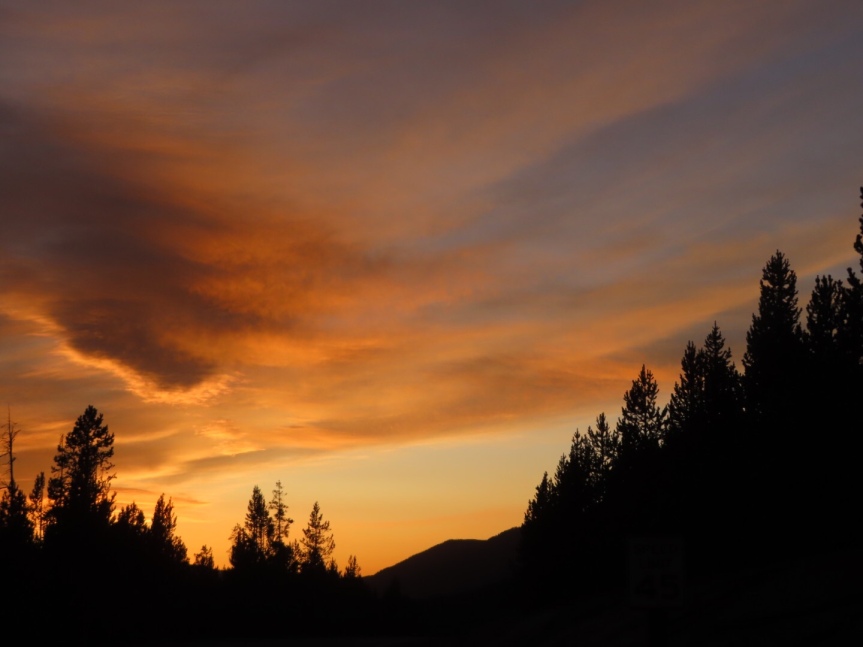 PJ stoked up a roaring fire and we sat close to its warmth as we ate our dinner and recapped our busy day. The camp was half empty and really quiet. The wind was gusting sending sparks into the trees. We kept a close eye on things until it died down. Off to Livingston tomorrow. 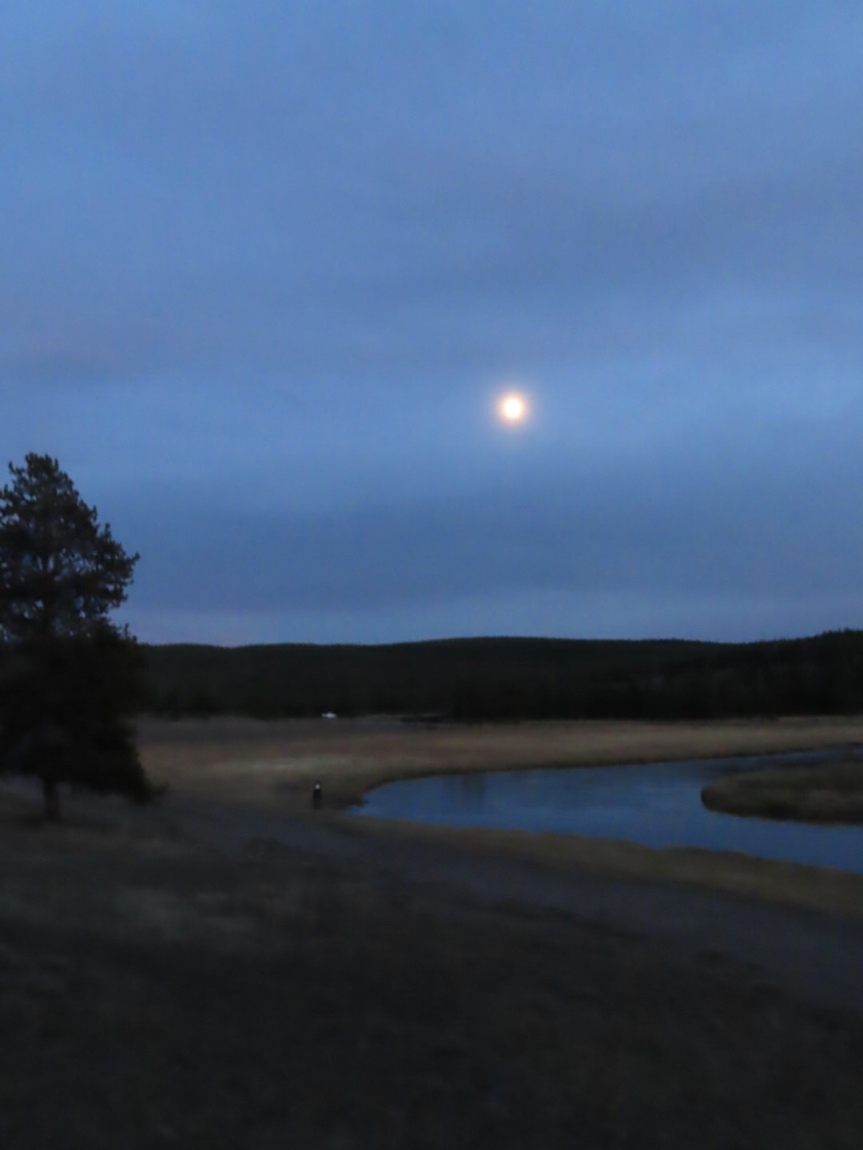 They say the moon with a halo means snow, we’ll see