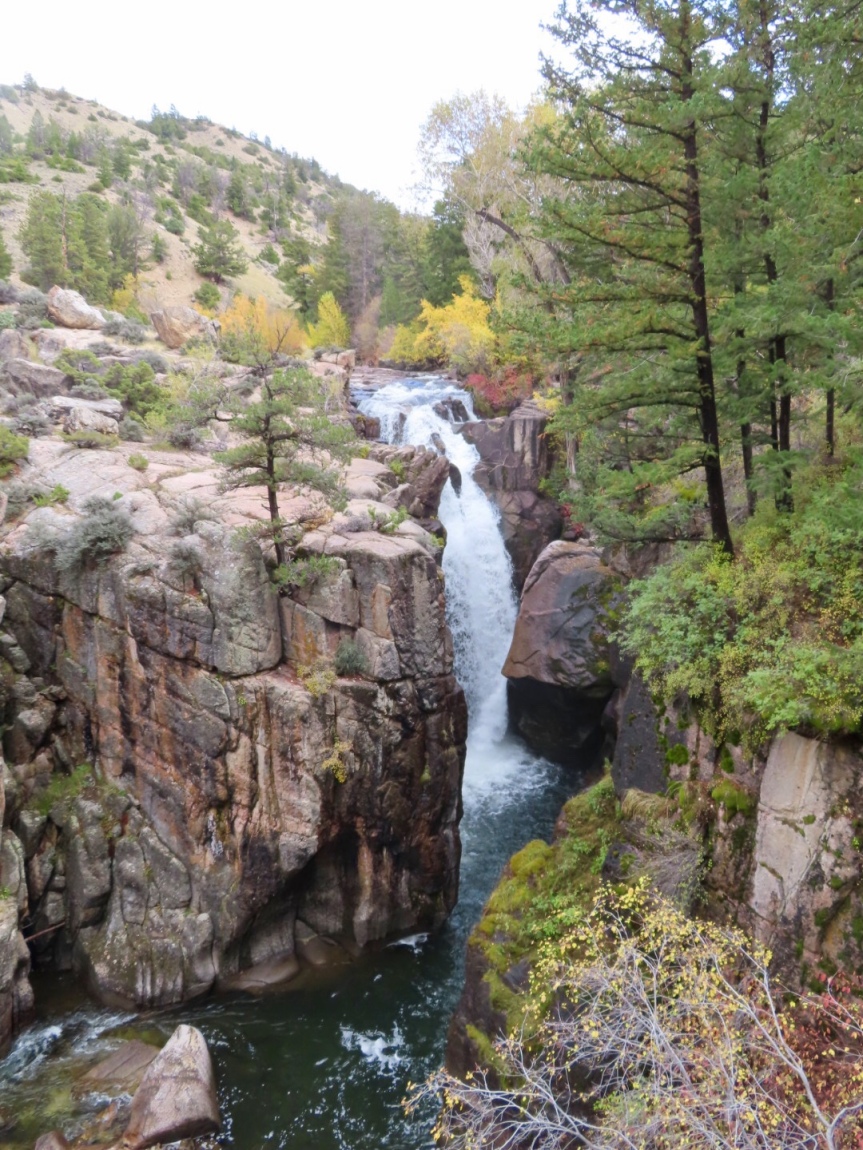 In the morning, Debbie sent us off on our expedition with a hot breakfast and a heaping helping of stimulating conversation as we got ready for an exploratory drive around the Bighorn Mountains with Tommy. He switched out his Toyota pick up for the old diesel Dodge that he had parked up at his shop building. 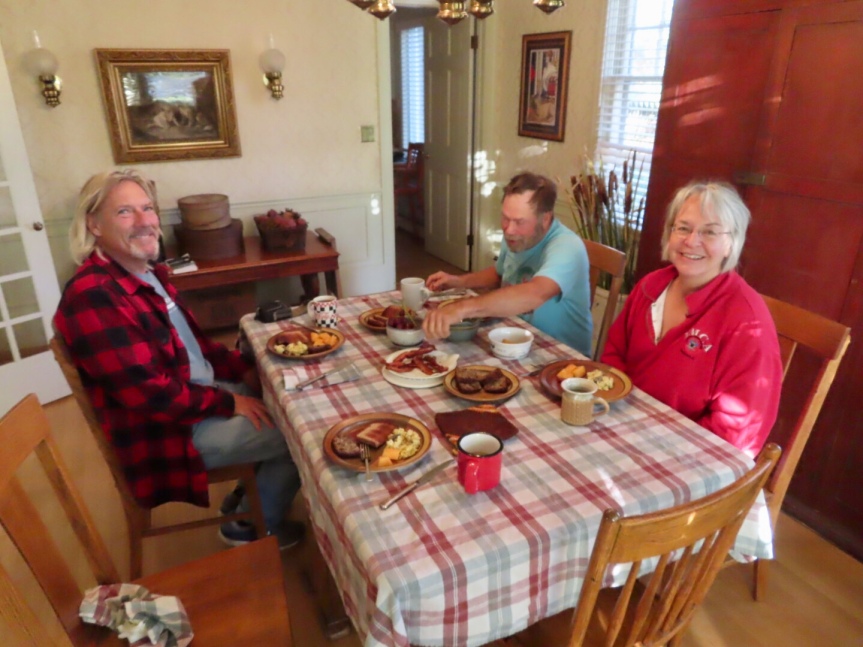 In Greybull, a really interesting lady named Lori runs the Crazy Woman boutique shop where Tommy figured PJ could find a nice long sleeved shirt. Like with everybody else in the two towns, Tommy knew Lori from either teaching her kids or just having been neighbors for so many years. We ended up buying hats, shirts and an awesome Wyoming tea mug for me. There is a small dinosaur museum across the street so we poked our noses in there and had a quick look around. 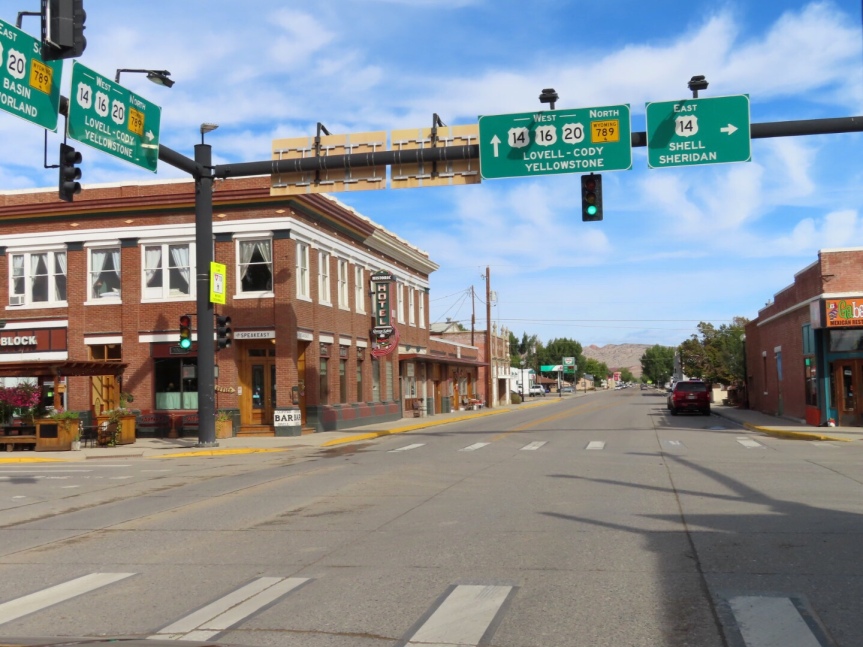 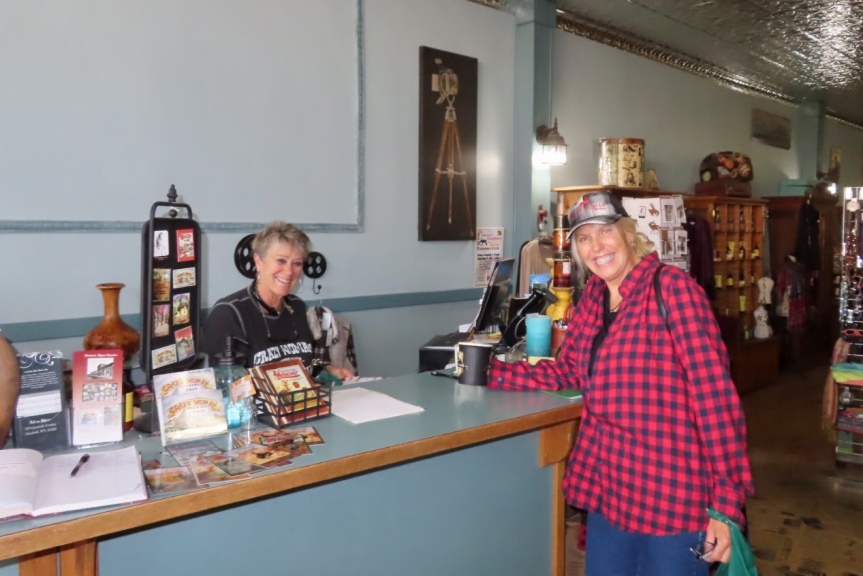 As we drove into the national forest, the landscape began to change. First we passed red rock canyons and rock formations reminiscent of Arizona or Utah. We followed a deep valley up a narrow pass until we reached a water fall on the left. The pull out and parking area had been closed off and shut down for the winter so we parked outside and walked on in. The falls dropped off a colorful mesa into a cleft in the rocky valley floor. There was another smaller waterfall on the west end of the draw that PJ and I spotted when we were sneaking a pee in the bushes on the back side of the closed up interpretive center. Beautiful scenery on every side. 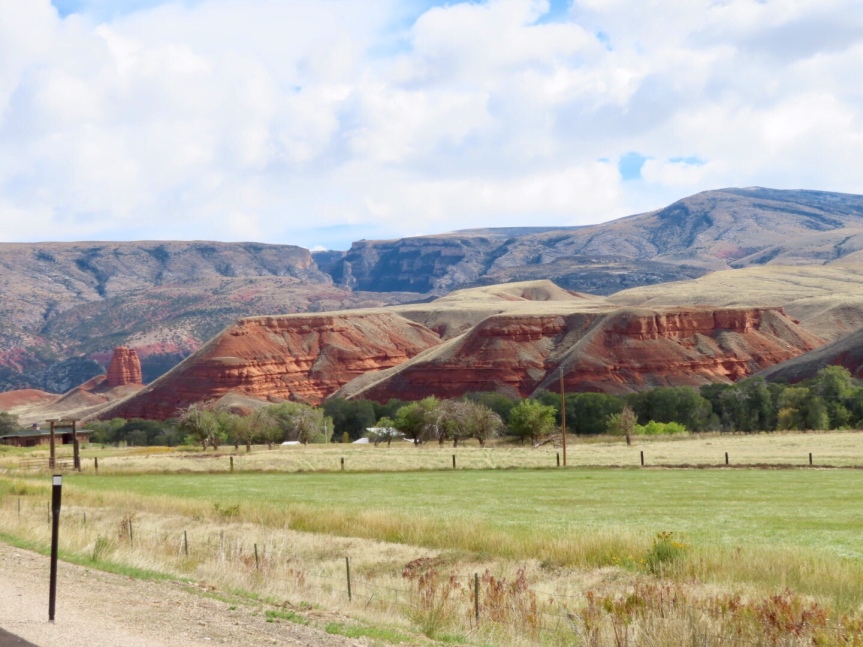 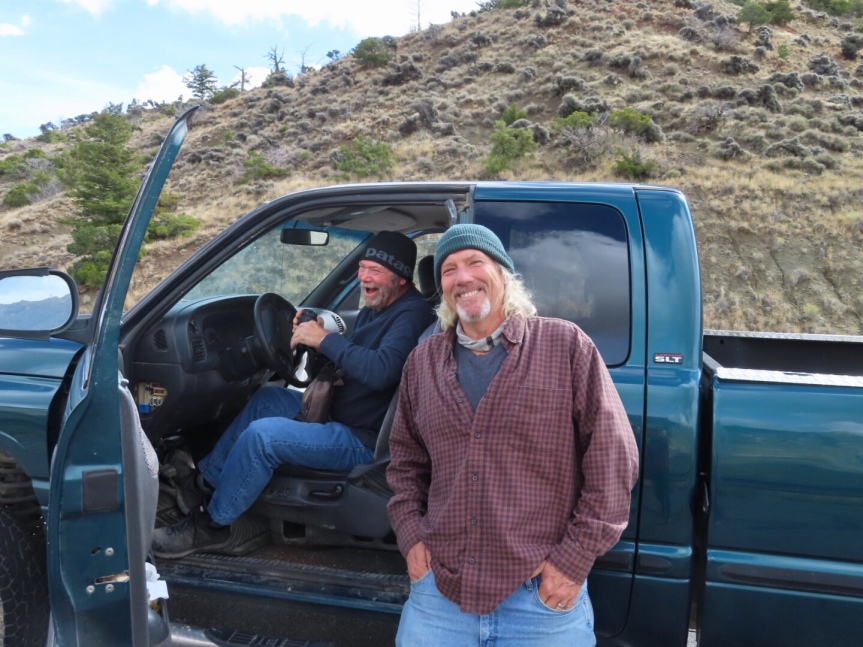 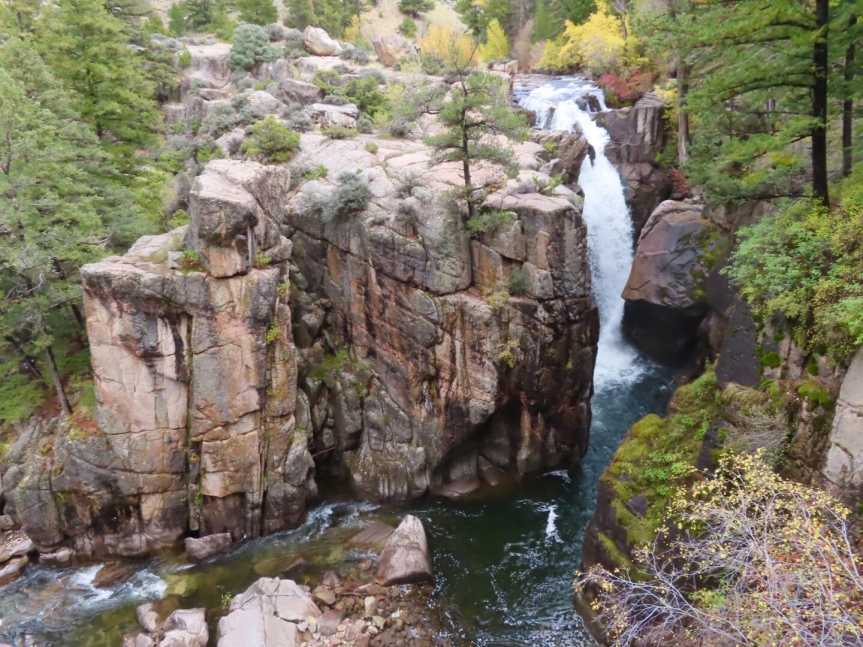 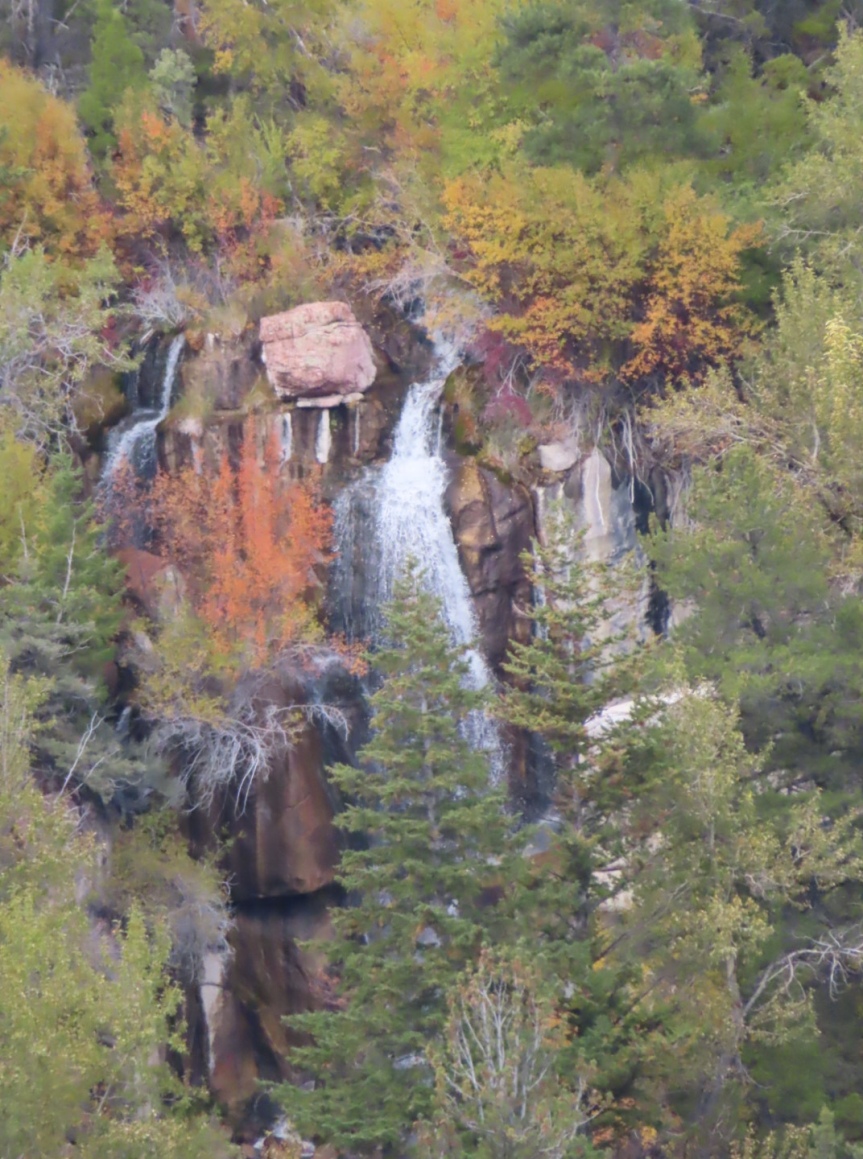 The snow increased and the temperatures continued to drop as we climbed higher into the range. Tommy got off the main road and we put the truck into four wheel drive to make our way down to Dead Swede campground. It felt like Christmas with all of snow decorated pines lining the roads. We got out for a quick snow ball fight and when PJ had had enough and surrendered, we drove over to the Bear Creek Lodge to get a bite of lunch. 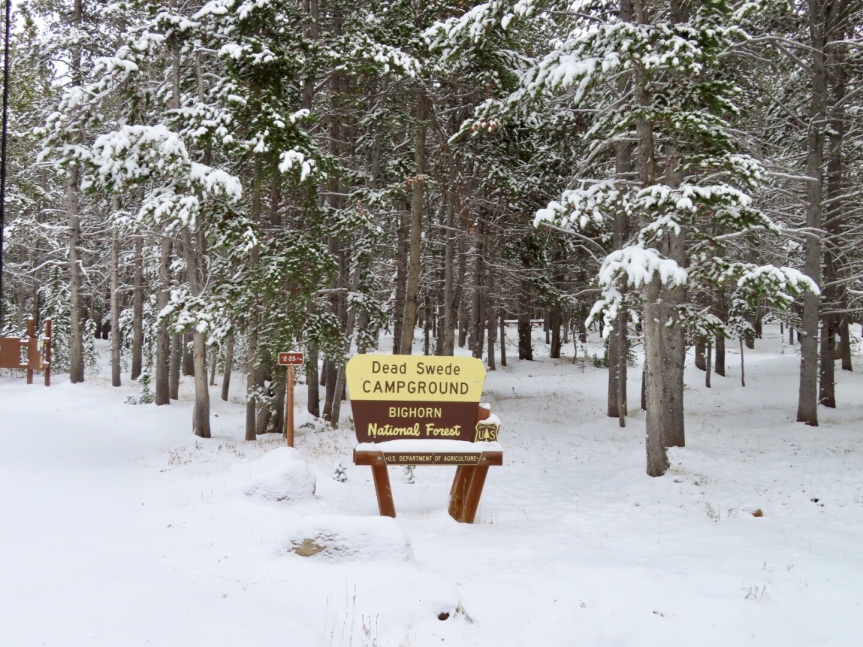 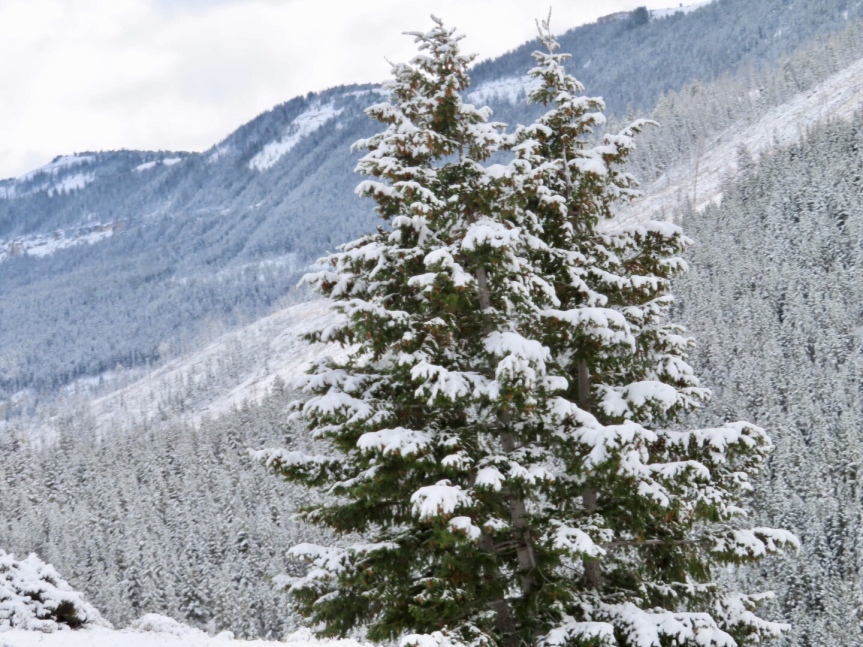 The lodge was doing a decent lunch business with the influx of hunters for the deer season. We enjoyed a good, hot meal in the rustic interior of the lodge. We sat in the bar among the giant deer heads and stuffed cougars and listened to the lively banter and cheers for football teams coming from the other tables. We got Tommy to tell us some family tales that we hadn’t heard before as we learned more of the family history and his thirty years plus teaching and coaching wrestling here in Wyoming. 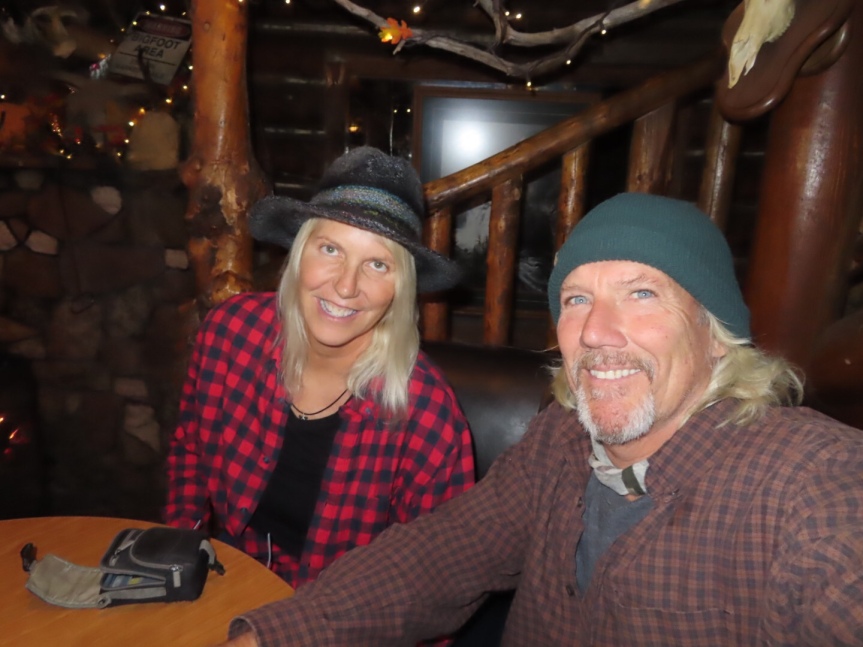 With full bellies and warm fingers, we climbed still higher in the mountains. There is a natural spring that has been tapped along the side of the road. A couple of guys from way down in the valley were there filling up a truck full of five gallon jugs to take home. I used my new mug to fill up on clear, ice cold water, as fresh as it gets. We stood around talking to the other gents until we started getting chilly then we went to the summit to look over the valley. 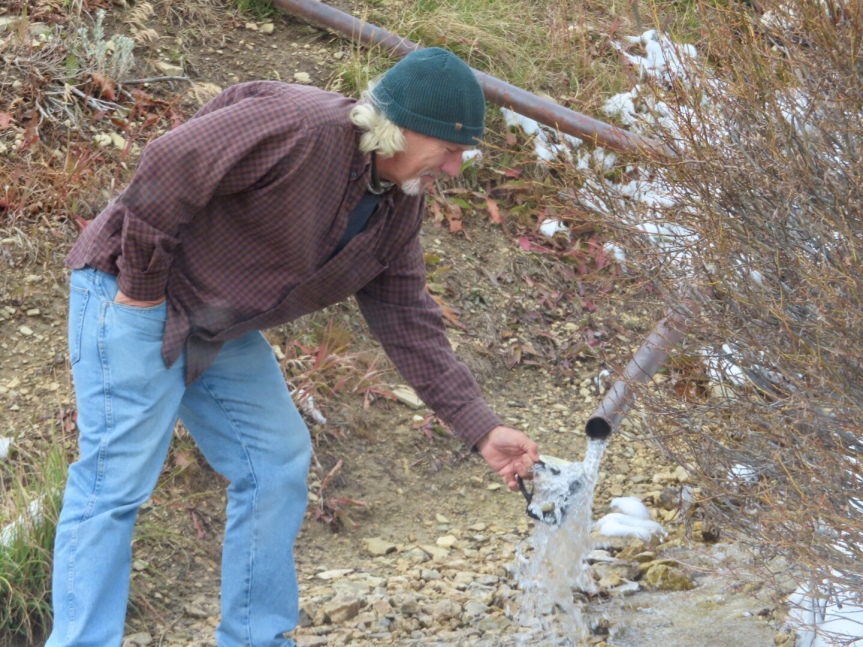 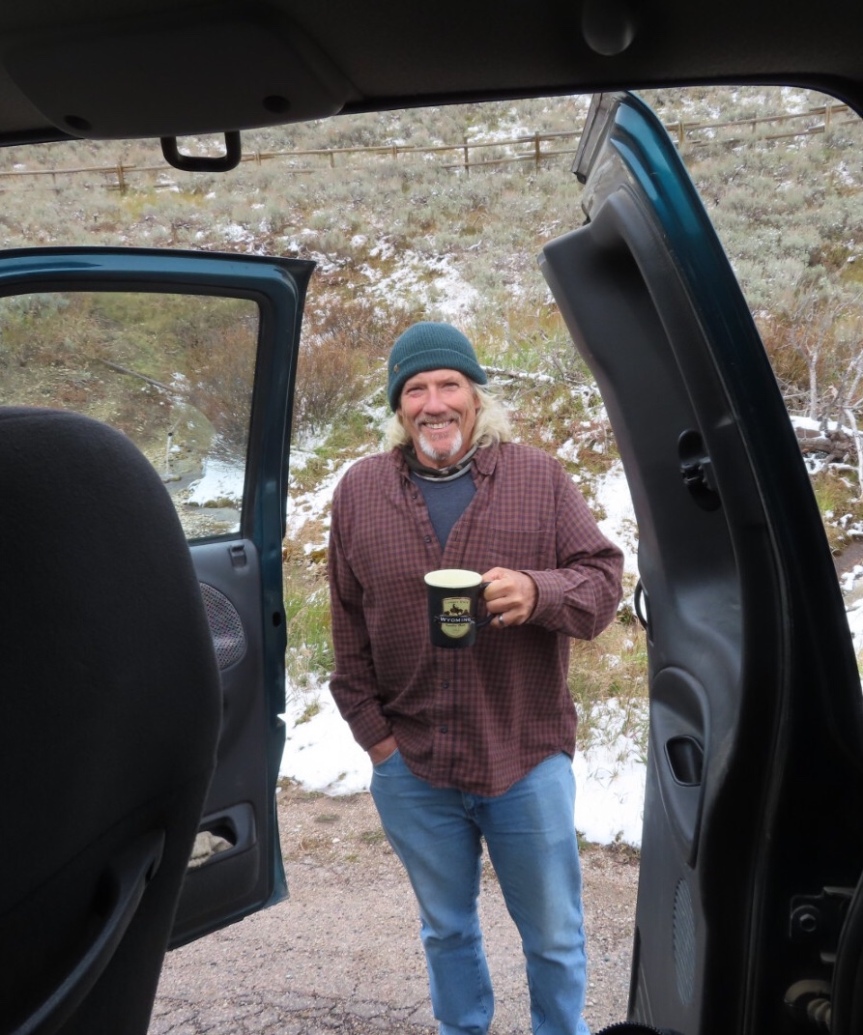 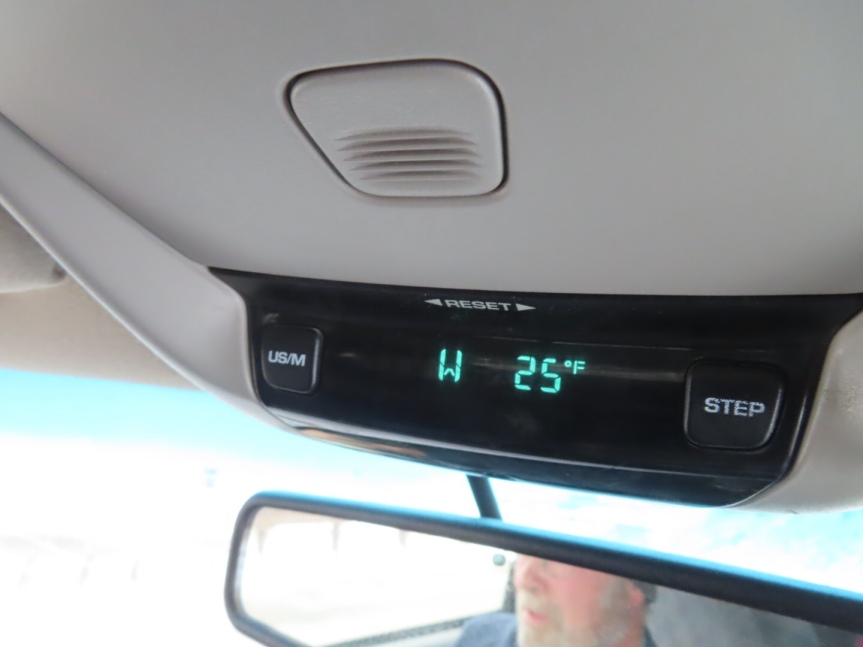 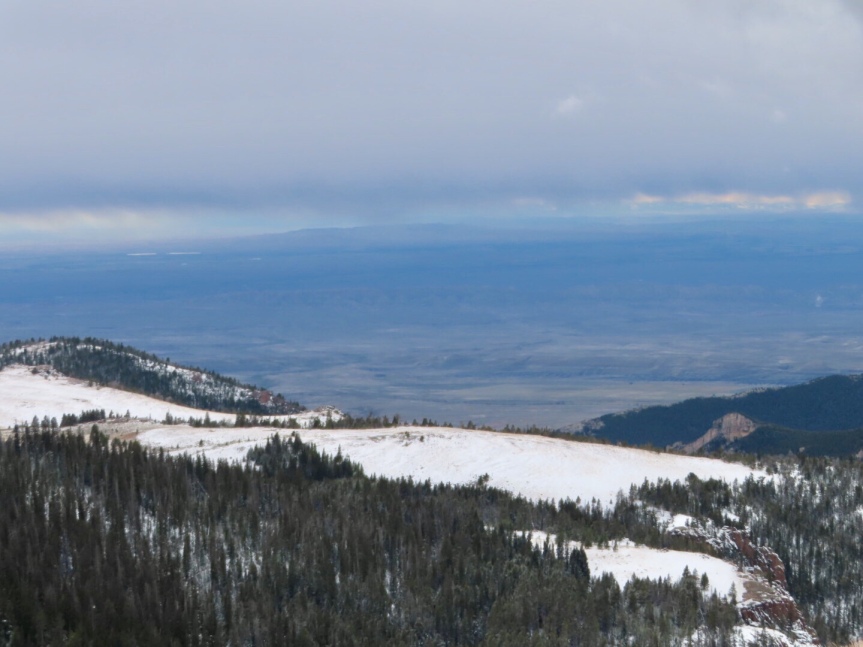 The views were amazing. We were looking all over for elk or maybe a moose but we only came across a few small deer on our wanderings. We admired the snowy vistas then it was time to head back down to Basin below. The clouds had closed in a bit and a few short flurries of snow came and went. Before long we were back in town and returning home in time for a marvelous manicotti dinner that Debbie had been putting together while we were out playing.

We enjoyed a great dinner with lots of sharing stories and talking about our dads and grandparents. Debbie topped off the dinner with a mouth watering hot fudge brownie with hot topping. All we were able to do after that was watch football as the Grizzlies won in a rout over Idaho 59-20. Tommy and I tried to watch A River Runs Through It afterwards but neither of us could stay awake. 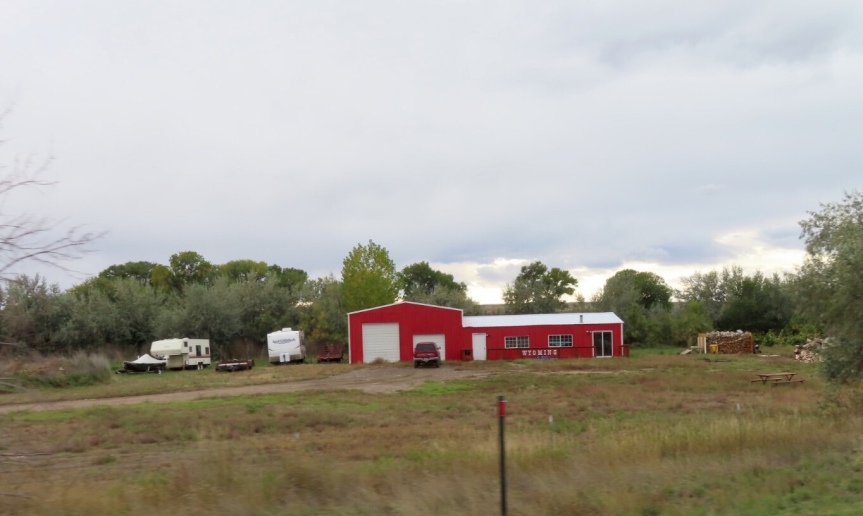