The sun had yet to breach the opening between the cactus covered peaks when I awoke this morning. A faint orange hue had begun to rise from behind the mesas and rocky crags to the east. I tried to convince Cali to come watch the sunrise but she was having none of it. She looked at me like I was out of my mind then grunted and hid her face behind her paws. 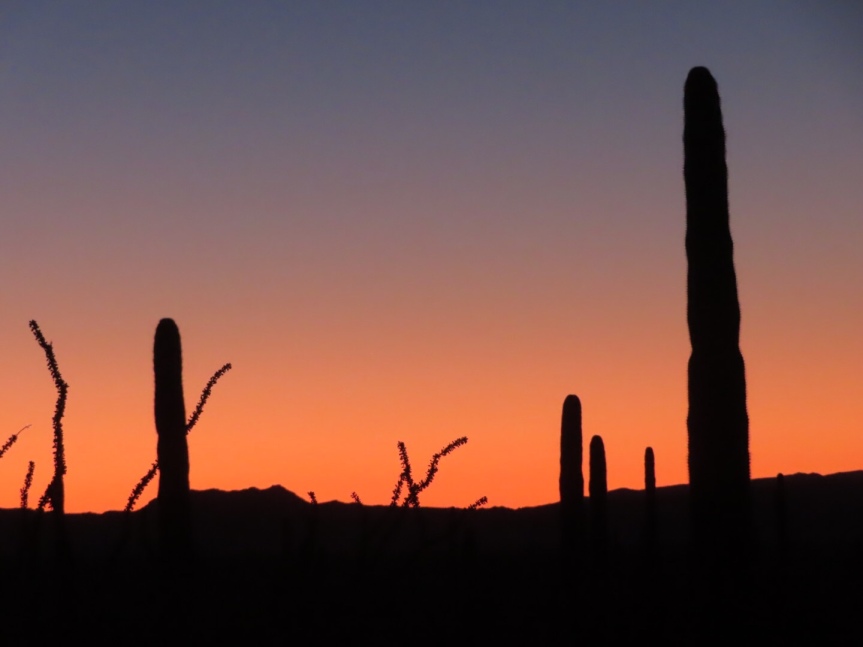 I wandered out into the chilly dawn air being careful to avoid any balls of jumping chollas that might be seeking to hitch a ride in my tender sandaled feet. The sunrise was a beauty and as a bonus the wolf moon was now setting in the west, everything opposite of what was presented last night. Only the mournful call of a few unidentified desert birds broke the quiet of the morning. A majority of the campers had the hoods of their vehicles propped open overnight lending the darkened campground an eerie visual of a junkyard or mechanics lot. They tell me it acts as a deterrent for the wood rats that seem to enjoy gnawing automotive wiring. 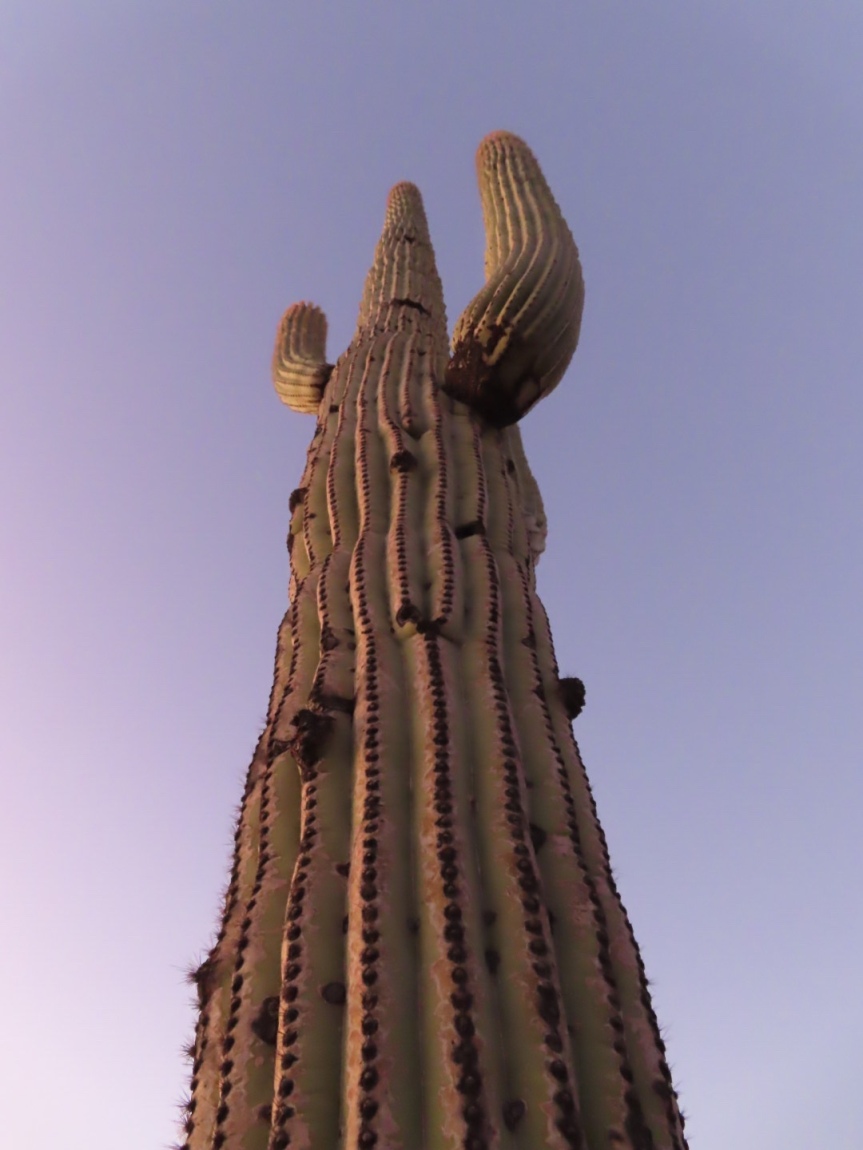 Cali and I were out of the Organ Pipe campground by 8:30 and it was just a few short miles down the road to the border crossing at Lukeville. I like this crossing because it rarely has any other people going through. Sure enough, I pulled right up and even though I punched the red light at the crossing the customs guy just had me park a few spots up and run in to get my tourist card. No one else in the building but me. I was in and out in just a few minutes. But….a few meters up the road, the army had a road block and the young bucks there decided to amuse themselves for a while going through the RV. They rummaged around for a few minutes then sent me down the road.

The odd thing with Lukeville though is that the office for the car import papers is another 19 miles down the road from the border crossing in San Emeterio. I had thought to maybe have a look at Puerto Peñasco but I didn’t want to backtrack 15 miles to the turnoff by the crossing. Also, the sign advertising for Peñasco with the pirate bones saying stay thirsty, my friend didn’t excite me as much as they’d hoped. It is kind of the Arizona version of San Felipe, go down and get wild on the weekends thing. 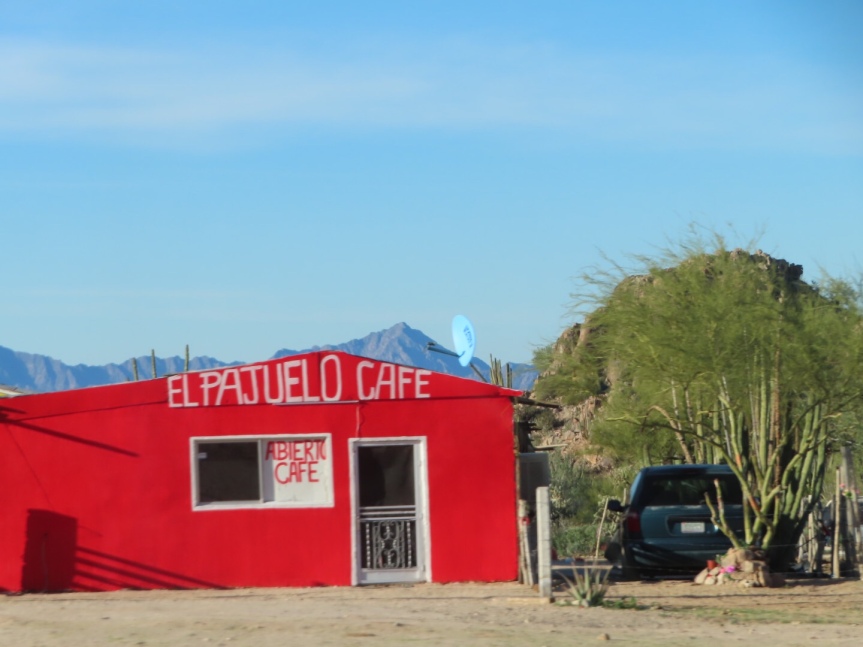 A few off road detours

At San Emeterio, there was a couple finishing up before me at the car permit window then I was next. Cool, I thought, a quick in and out again. Not so fast, gringo. The clerk wanted photocopies of my passport, driver’s license, registration and the tourist card I just picked up in Lukeville. I had copies of the others but not the recent acquisition. Do they have a copy machine in this giant empty facility? You guessed correctly if you said no. The customs center is like a mall with multiple rooms off of the sides and some X-ray machines like at the airport to scan bus riding people’s luggage. There are four people total working in the entire building; my guy at the permit window, a disinterested lady at the customs desk across the way, a Santander bank window and one army guy with a machine gun at the far end of the building. I was told to leave the facility and walk across the highway to Cafe Daniela to buy copies, so I marched out of the tall cement walls covered with razor wire along the tops, a wall Trump would be proud to own, and trudged a quarter mile down the dusty highway to Daniela’s where the lady had to leave a patron’s huevos rancheros simmering on the stove to come and make my copies. When I finally hoofed it back across the road, the clerk said he had to go outside to process some guys car and he disappeared for twenty minutes leaving me milling about the ghost town of a customs center listening to the angry girl’s phone calls echoing through the halls. Finally, he returned and before long I was out the door and rolling towards Caborca through the Sonoran countryside.

I had thought to overnight at Edgar and Ana’s RV spot in Santa Ana, but when I got there it was shortly after one thirty and I didn’t want to just loiter around the dusty backyard for the whole day. Edgar passed away last year and they say his relatives are keeping the place going. Without Edgar to hunt burritos with, I decided to buck up and press on for Guaymas another 3 hours to the south. I put the hammer down and blew Cali’s hair back making tracks down highway 2. At Hermosillo, they have a new bypass for Guaymas that completely skirts the city to the east. Two lanes of new concrete highway, never saw a building or streetlight of Hermosillo. One of the best $12.00 I’ve spent.

The sun was just about to set when I passed through the gate at the Cortez Hotel and RV Park. The RV section is a little overgrown and shabby looking, but the hotel is really nice. We’re right on the Sea of Cortez with easy access to the water. I got set up and walked around the grounds catching the sunset and enjoying the view and being on the water after a few landlocked desert days. Looking forward to getting out on the gulf tomorrow. I got the play off game in Spanish on the TV and lounged around watching the Titans spank the Ravens. Cali and I are both beat from 8 hours of travel so we’re taking it as easy as we please.