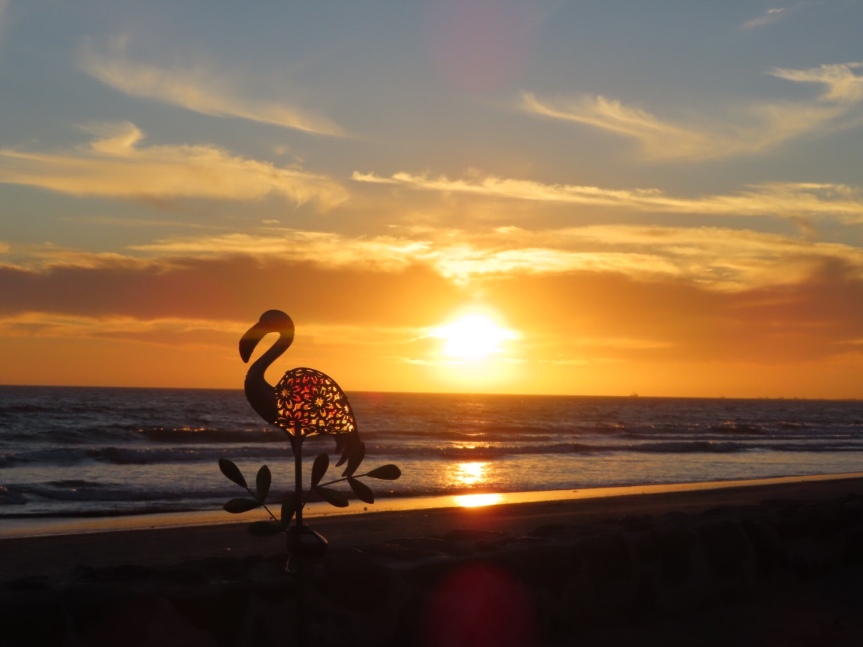 There was some banging noise coming from over near the restaurant at five o’clock in the morning, just enough to wake me up before whatever it was went quiet again. My mind started to overflow with random thoughts and memories. By six, I was able to slip back into a comfortable sleep until some grackles decided to tap dance on my roof vent at eight o’clock. Time to get up. I took Cali out and noticed that the sea was as calm as I’ve seen it here, so I wasted no time getting suited up and out for a paddle. My mind remained active throughout the paddle, calling up old jobs I’ve had, people I’d known that have passed on. One random thought would somehow connect to another totally unrelated random though and so the cascade would go. I just watched the process and kind of marveled really. Some of the things were revealing and a feeling of gratitude began to percolate from somewhere in the obscure recesses of my brain. An interesting interlude on the ruffled surface of the Sea of Cortez. 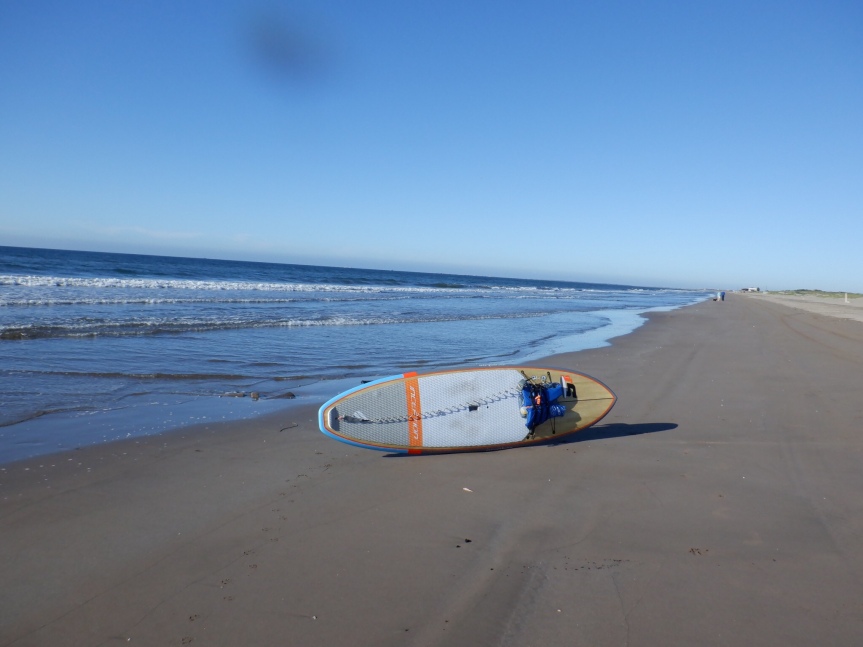 Good thing I jumped on it when I did because by the time I got to my turn around point, the wind had already begun to rise and rise it did. A lone horse watched me carefully from the dunes as I slowly lumbered past. The workers at El Delfin were prepping the restaurant for the Saturday crowds that come out from Obregon, Novajoa and Huatabampo for the weekend fiesta. It was an easy paddle home and then it was oatmeal time out on the sand. The locals had organized a clean up crew and they walked down the beach filling bags with trash and heaping them on a trailer that followed them. 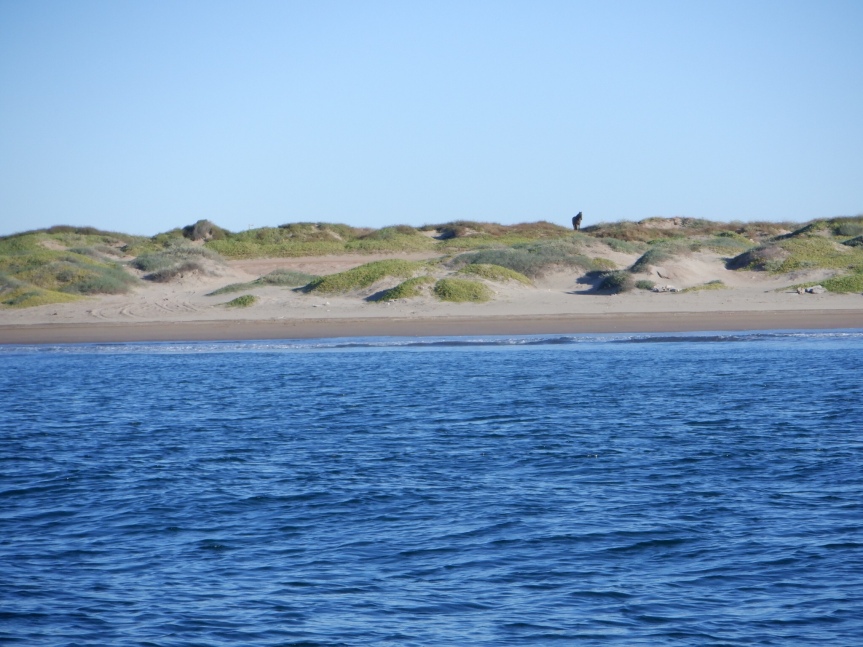 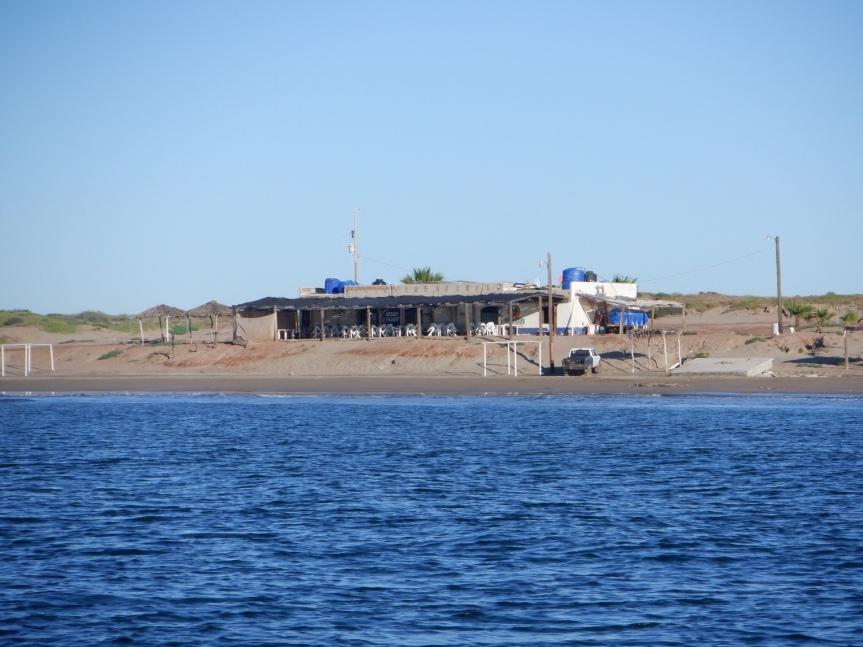 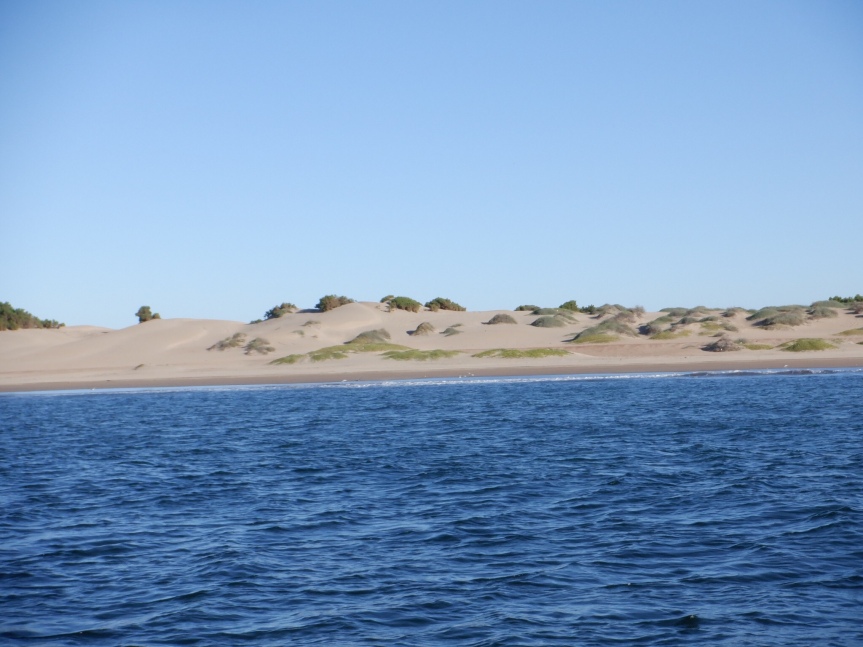 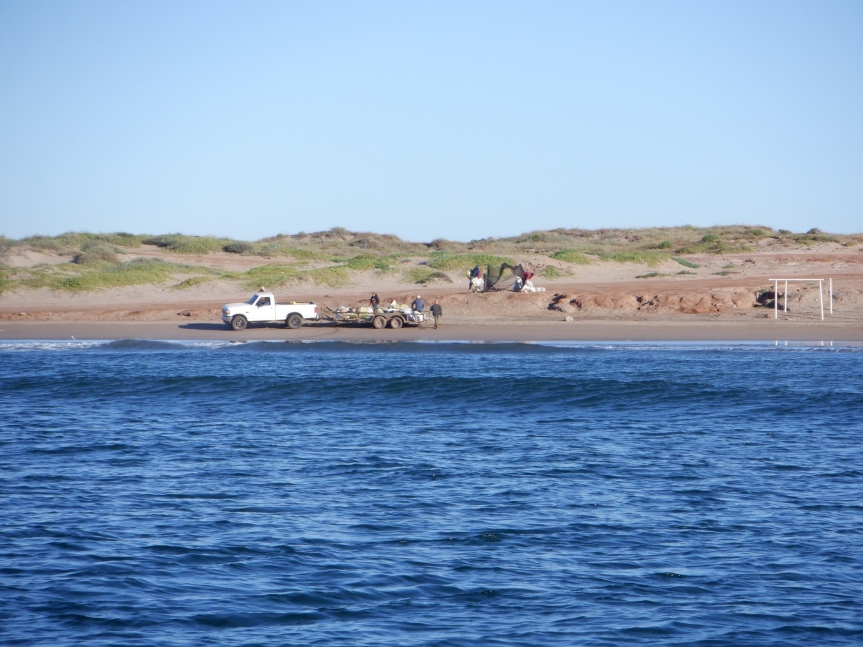 It was an exceptionally windy day once it got blowing. I had to close the door because it was threatening to fly off its hinges. I had a hankering for carne asada tacos, so I unleashed my bike and set off in search of a taco stand. I started by riding into the area of houses just to our south. There was a closed taco shop but nothing else in the small village. Just as I was beginning to despair, a local guy told me to head 4 miles up the road to Moroncarit and there’d be something there. 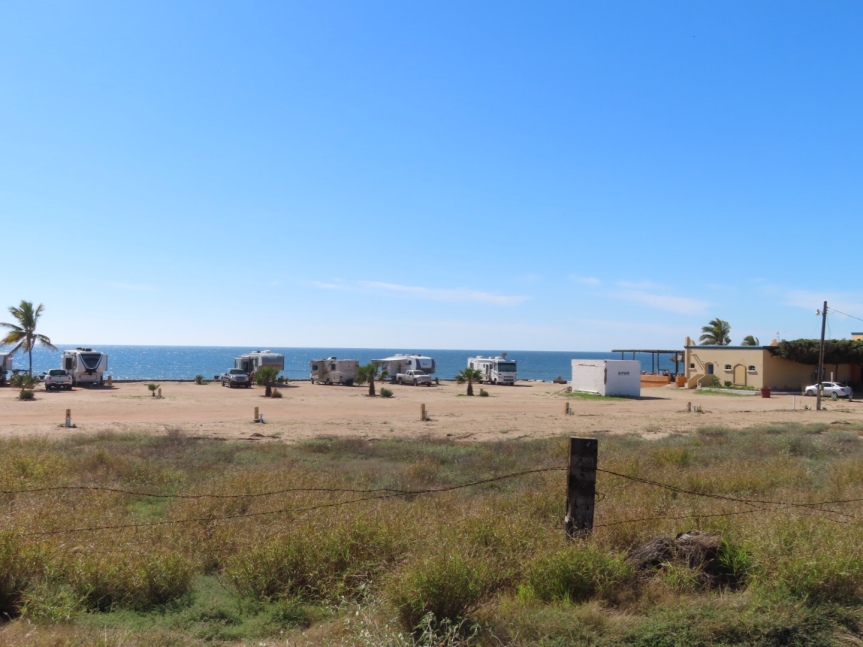 I beared down and put my face into the wind and pedaled hard back to the north. It felt as if I was going uphill on the flats. I pulled up my buff to keep the dust out of my mouth but the sand was blowing into my eyes. As I was wishing I’d brought some sunglasses along, I looked down on the pavement and there was a pair of new looking safety goggles laying right at my wheel. Por Dios! A gift from the heavens. I put them on and pushed through the desert into the dusty little berg of Moroncarit. 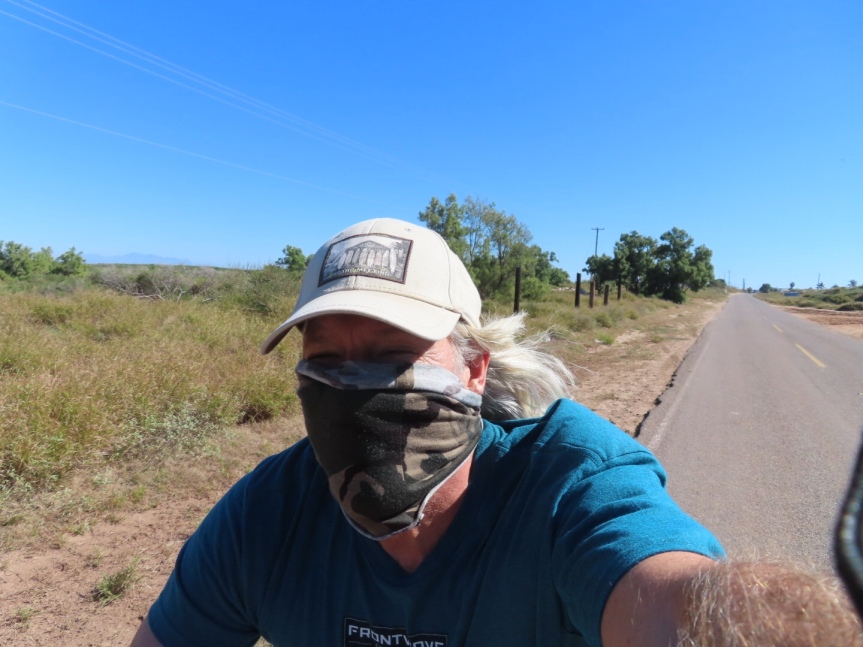 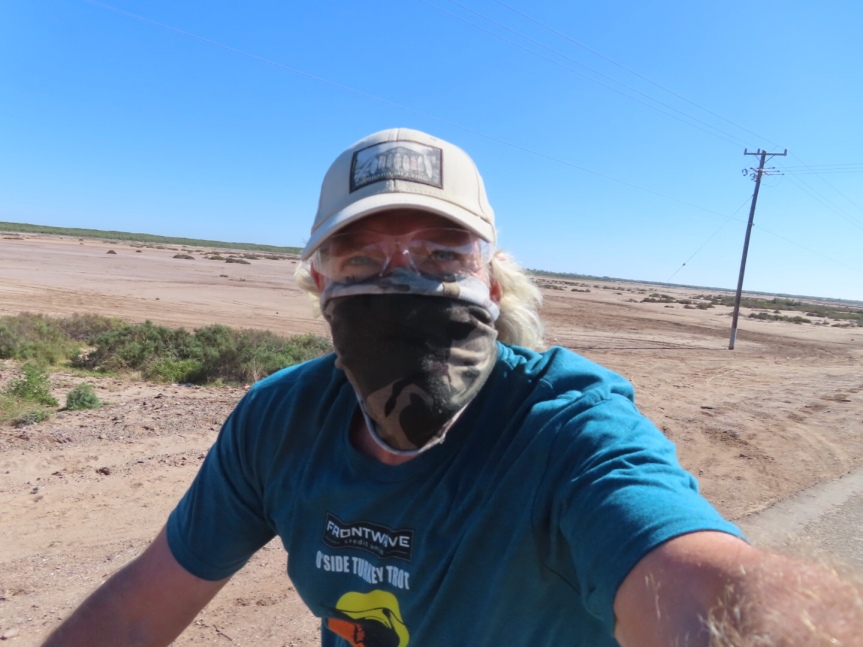 There were food stands lining the roadside but they were all seafood, every one. Lisa frito was the local favorite, a fried mullet. Not exactly the carne I was looking for. At the very far end of town was a new restaurant that was a little too clean and shiny looking for my taste that had carne asada quesadillas. Good enough. I parked the bike outside the jail like fencing surrounding the place and sat down for lunch. I ordered a caracol tostada, a sort of conch like snail and the carne asada quesadilla. If I’d have known how big the quesadilla was going to be I would have nixed the tostada. 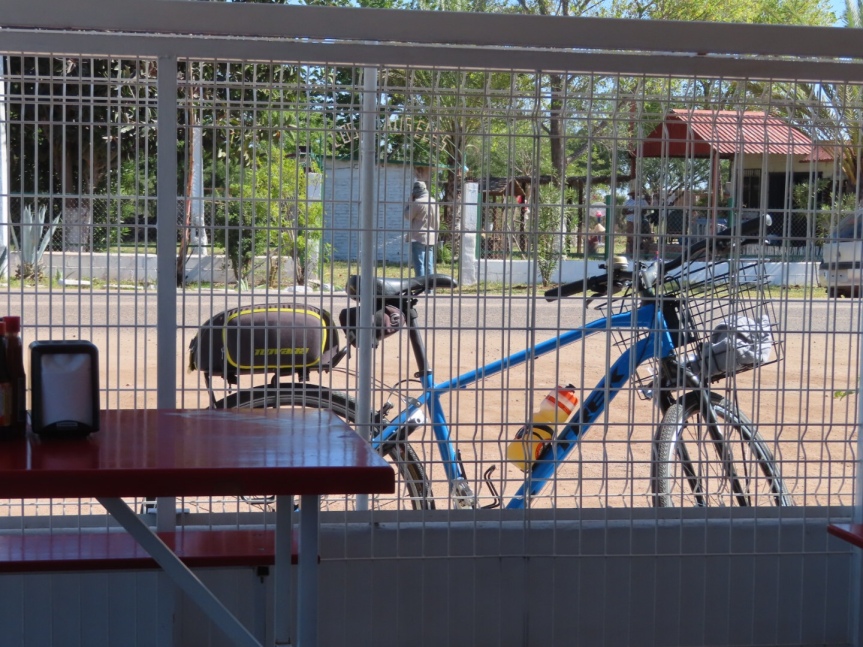 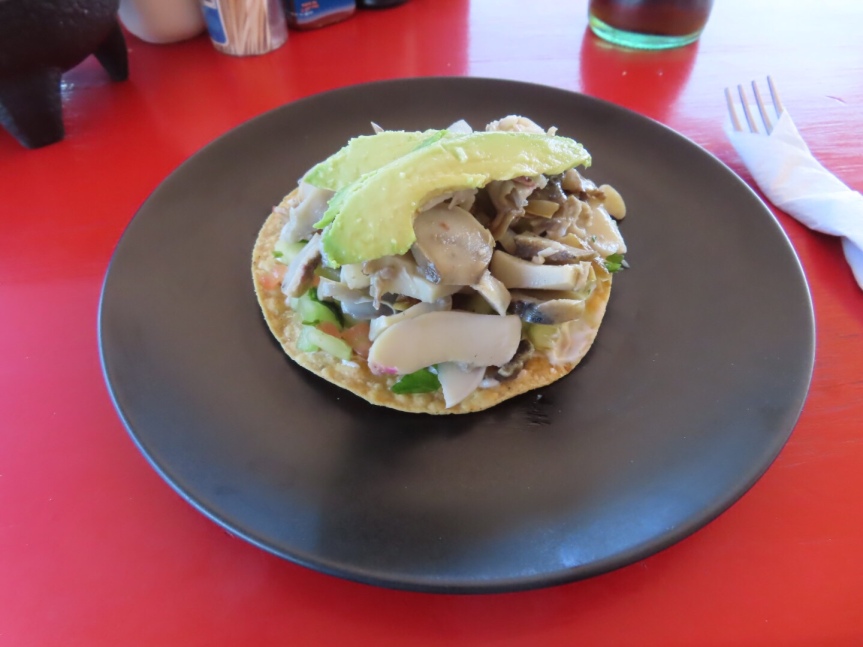 Both items were excellent. I sat back and savored each bite. They have a collection of about eight different hot sauces so I had to sample them all. The waitress was friendly and the food was killer. If I could remember the name of the joint I’d give them a plug. Just remember the big white and red jail cell at the north end of town. 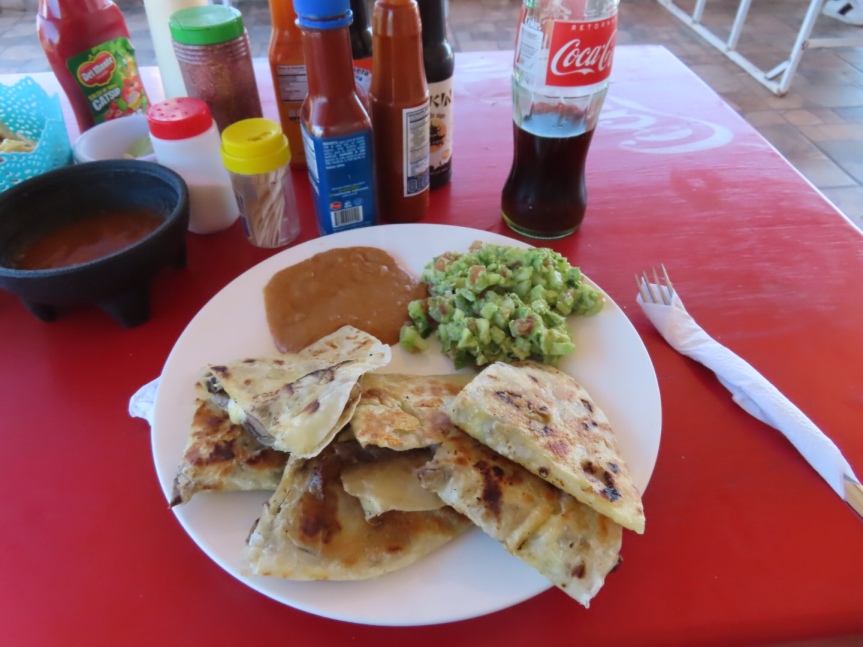 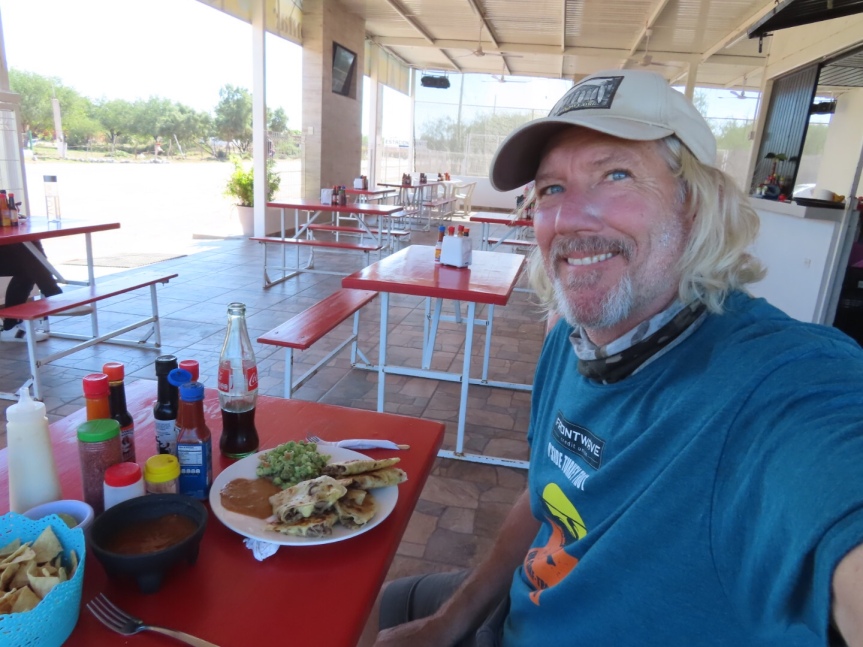 The ride home was easy with the wind at my back. I parked the bike, grabbed Cali and we jumped in the water for a cooling swim. Well, I jumped in the water. Cali waded in up to her bony little knees. I had thought to sit around and dry in my chair but Cali wasn’t having it. We went for another foray down the beach towards El Delfin but turned around before we got too close to all of the hoopla and festivities. 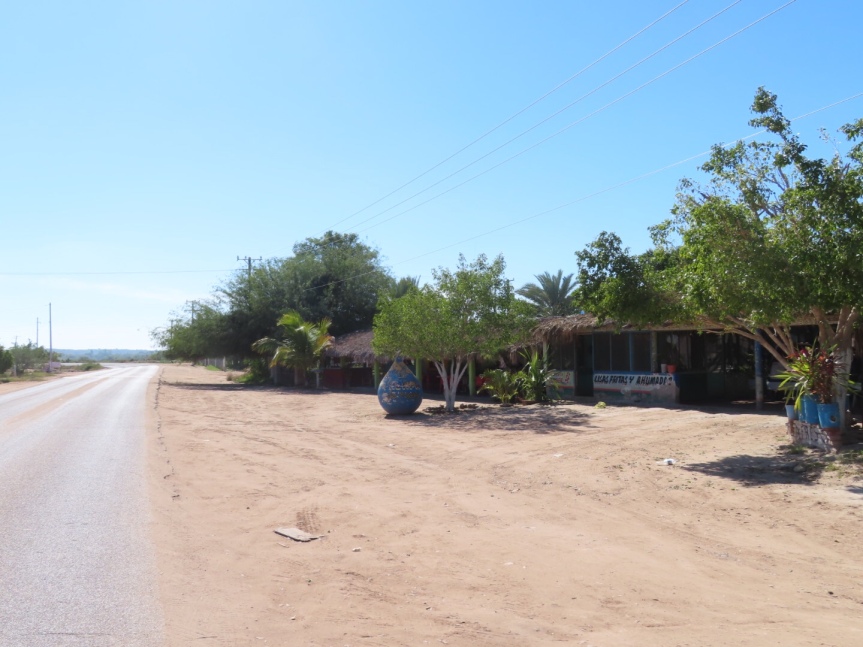 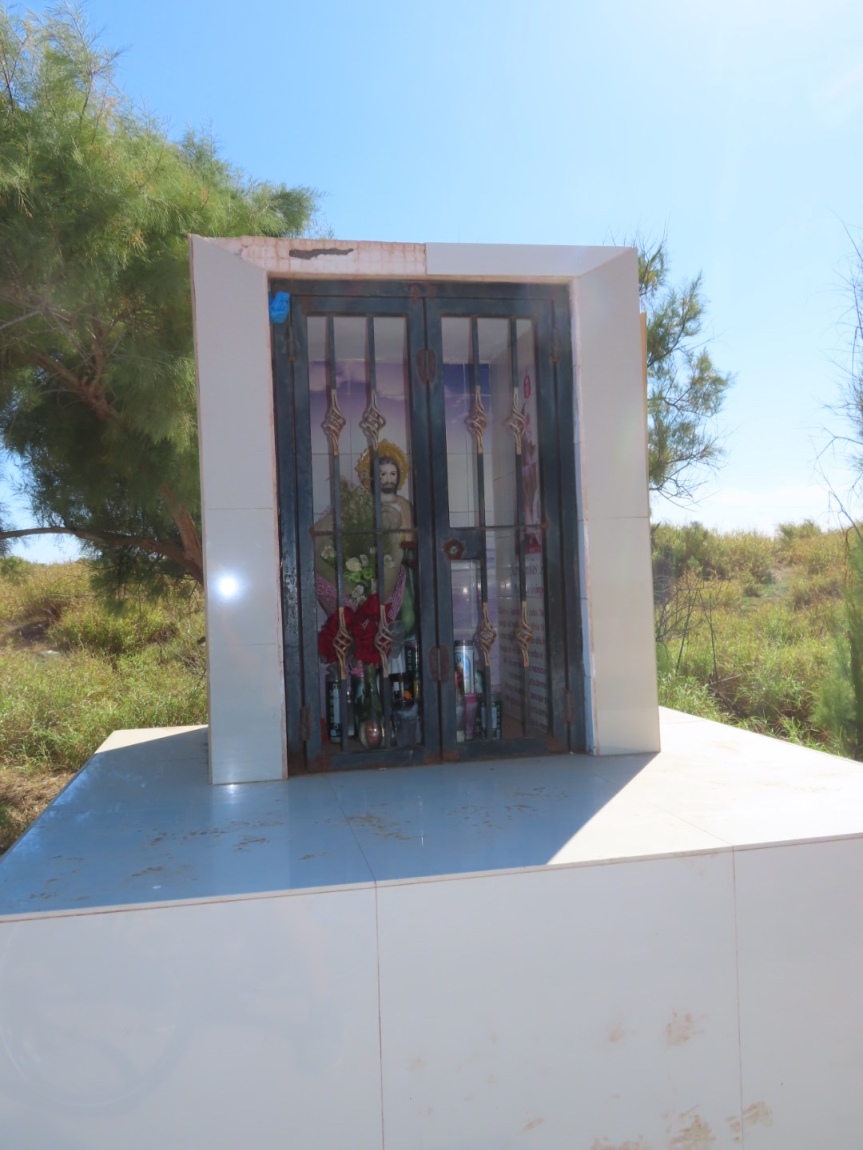 Thanks for the goggles! 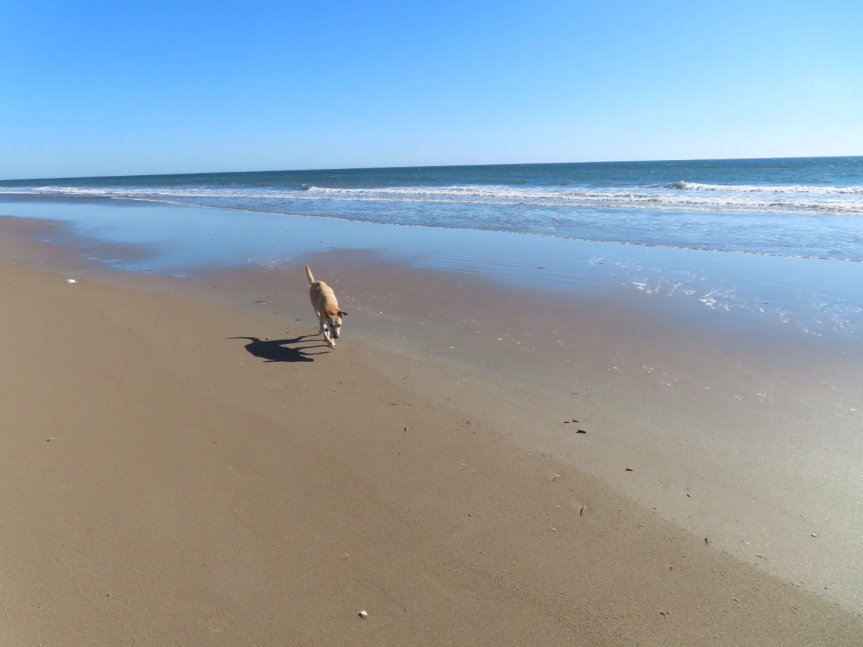 Everyone tired of pictures of Cali on the beach? 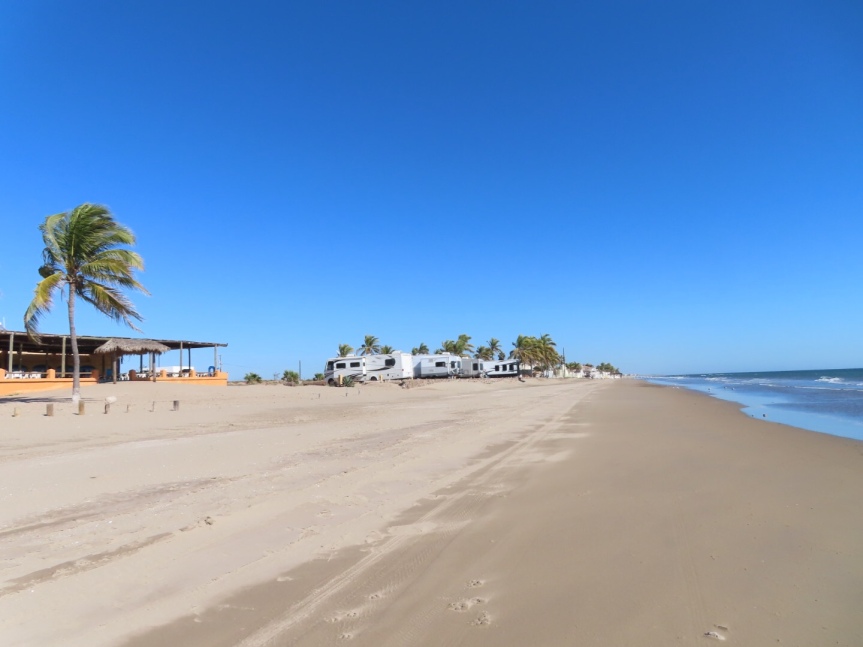 Easy afternoon. A face time home, a little housework and a short nap. I packed up a few things to be ready to roll tomorrow just as the sun was setting. Had a long conversation with Saskatchewan Dave next door as I tied on the bikes. I had to take a break to sit on the seawall and catch the sunset. Huatabampito is a cool little stop. The only drawback is the wind. We’ll see where tomorrow takes us. 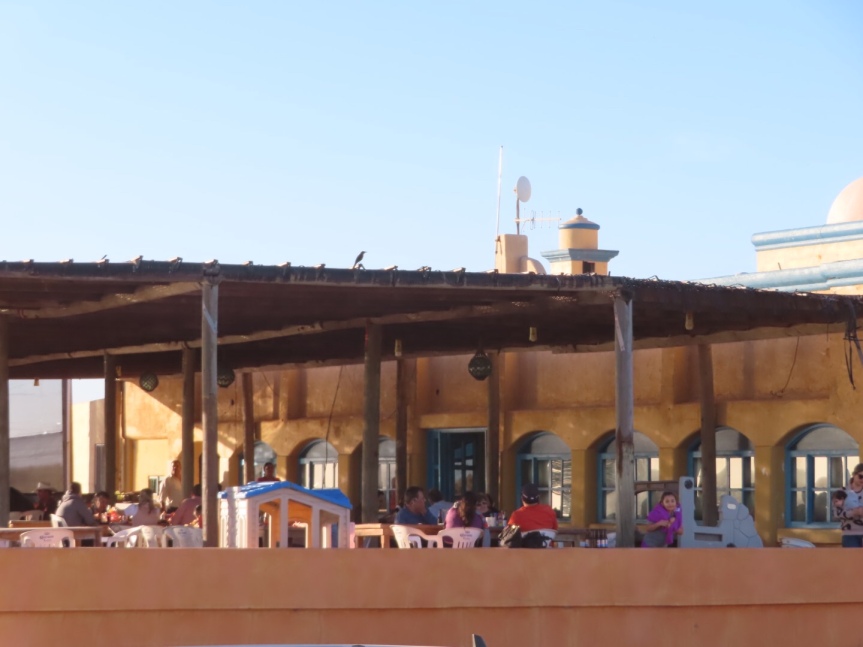 Our restaurant even pulled in a Saturday crowd 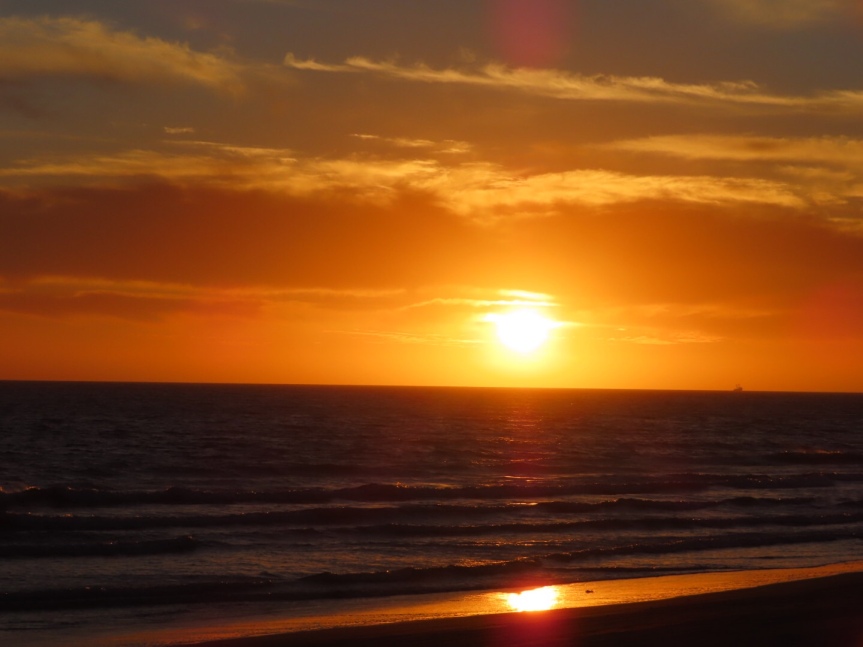 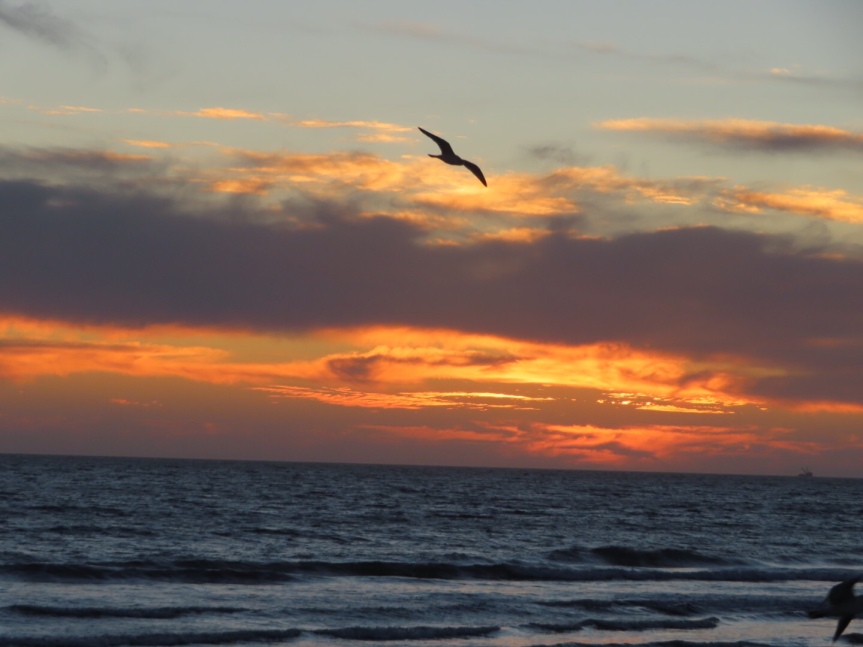