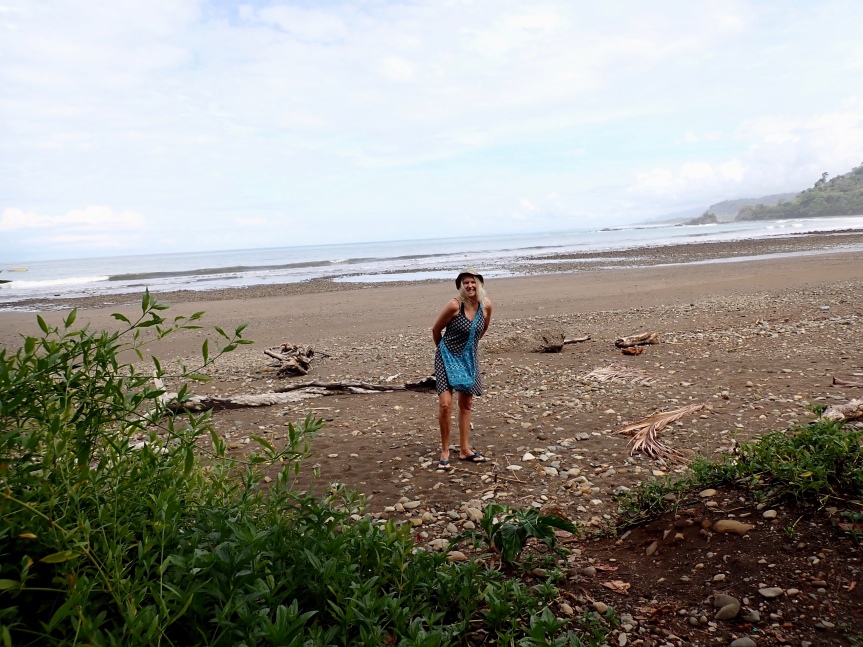 There was a black squirrel playing in the large palm just outside our door this morning. I don’t know if that’s a bad omen, a good omen or any kind of omen at all. After visiting some Rhode Island friends on Zoom, we set our sights on visiting a small set of falls on a river up in the foothills of Ojochal. There are tilapia farms and small ranches tucked up in the jungle along the way.

The road was still a little muddy from the hard rain two days ago. We parked the car in front of a restaurant that is part of a tilapia farm. To be honest, it wasn’t much of a hike to get to the falls. They were easily reached walking down a jungle path that soon reached a scaffolding of boards and planks that formed a patchwork fix to a deteriorating boardwalk that bridges a small gorge to get to the river. 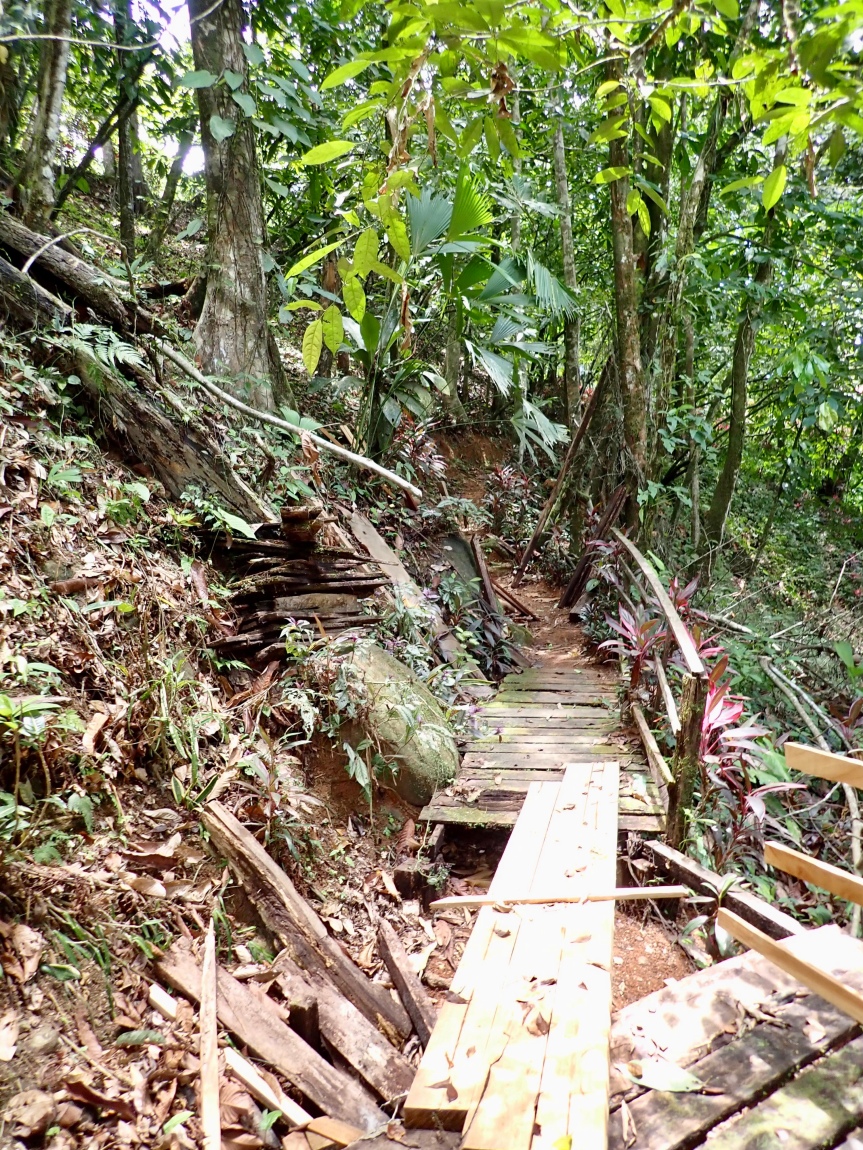 The water was cool and the jump in was a definite eye opener. We swam in the pool and jumped off the rocks beating the heat of the day. Small fish would get curious and come to check out your toes. Sitting in the shallows, you could regulate your temperature by moving in or out of the shade. 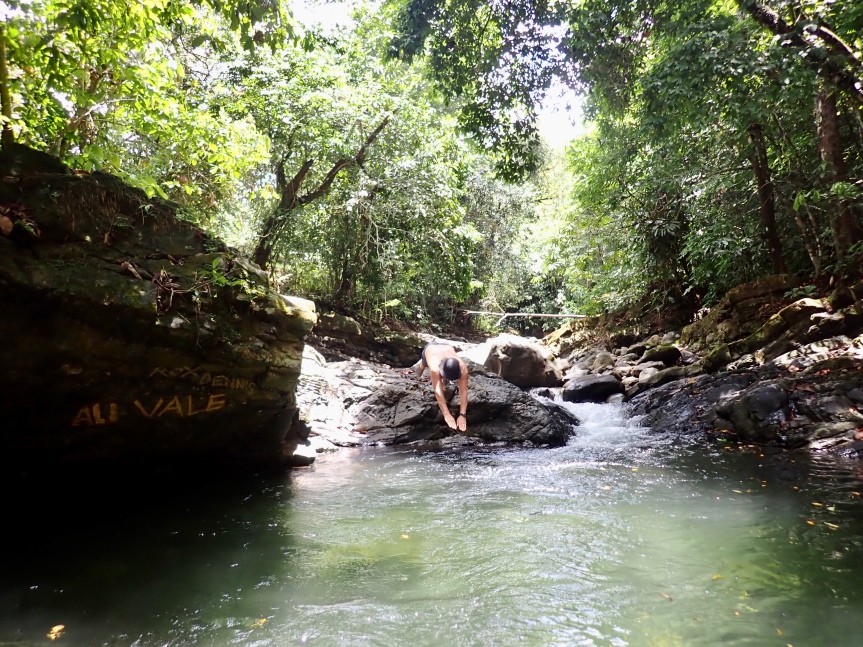 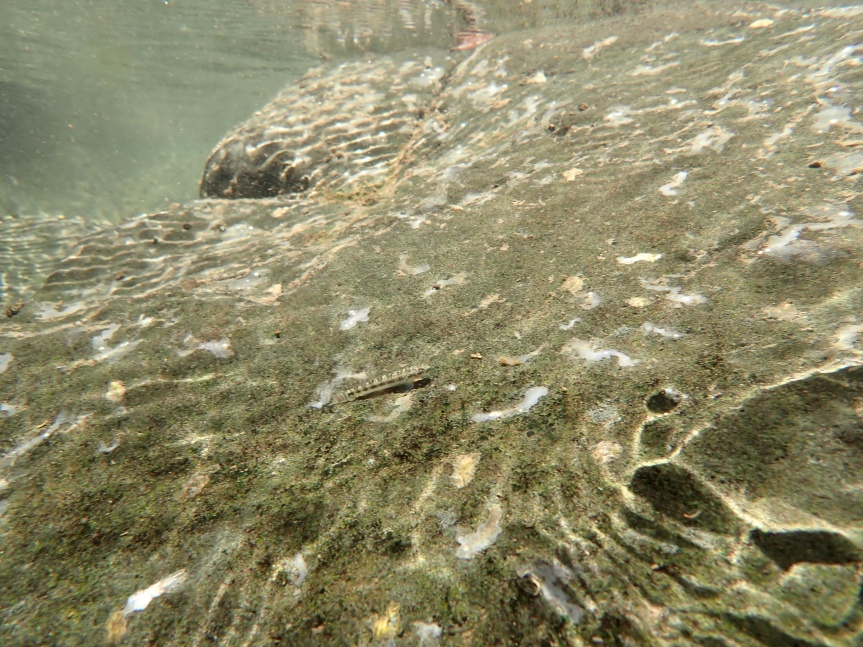 We explored the lower pools and leaned over the drop off where the farthest ledge spilled the river into a calmer stretch of water that went on to feed the fish ponds below. We were the only people there. We sat meditatively listening to the sounds of the jungle: birds, rushing water and the rustling of the wind. Butterflies and dragonflies would pass by and visit creating patterns on the air with their flight.

We carried our belongings back out to the restaurant and hung the wet clothes on the surf racks to dry. We ordered up fish plates then hiked the trail through the fish ponds to see the 200 year old ceiba tree at the edge of the jungle. A magnificent giant covered in epiphytes. There was a spiritual essence to the ceiba that elicited a silence from us as we took in the beauty and imagined what changes the old being had seen in it’s lifetime. 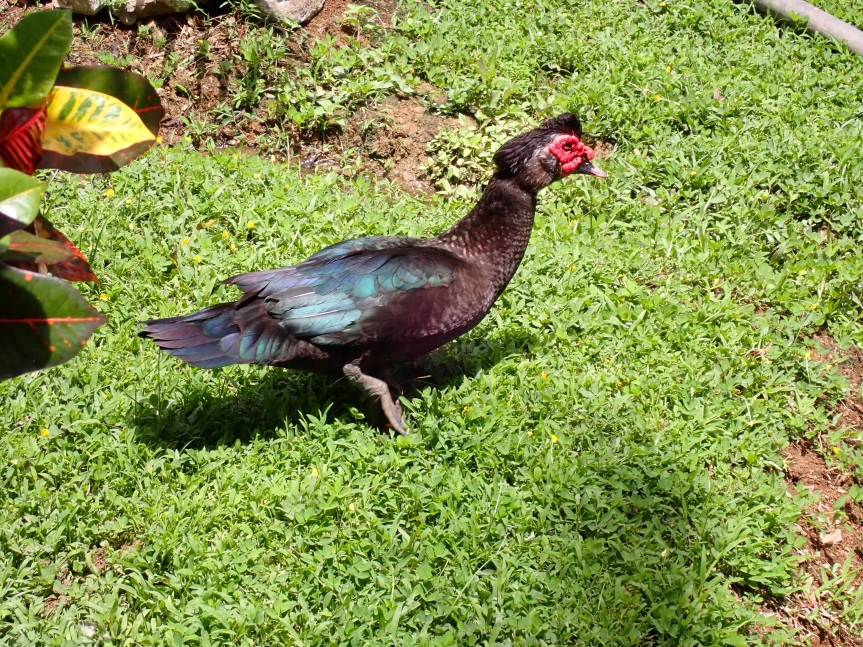 The roots were gigantic, looking like fallen trees themselves. A small shrine sat in the corner of the field where people had left small offerings. Odd looking ducks monitored our movements as we walked about the clearing. Lunch was calling so we turned back up the trail and headed back to our table. 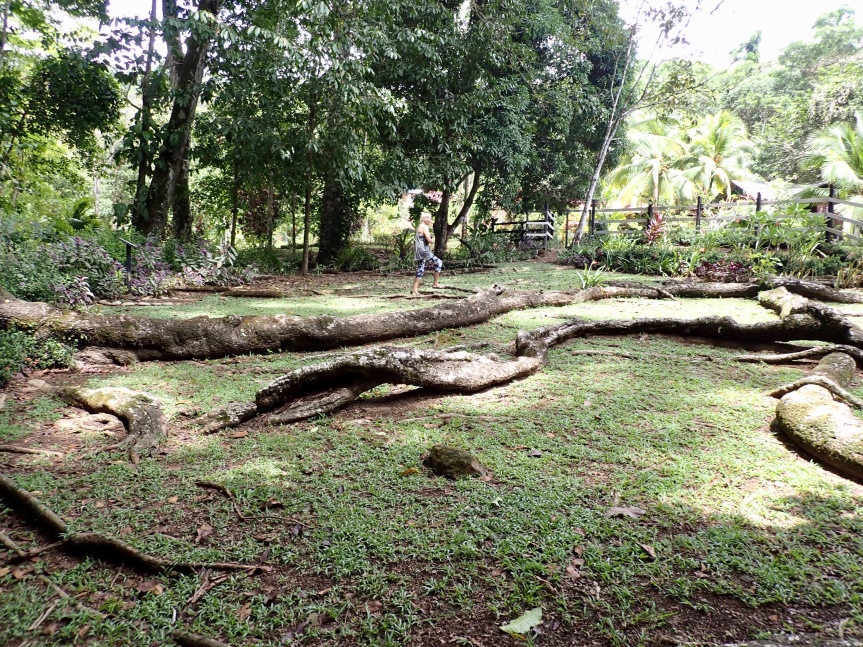 PJ getting back to her roots 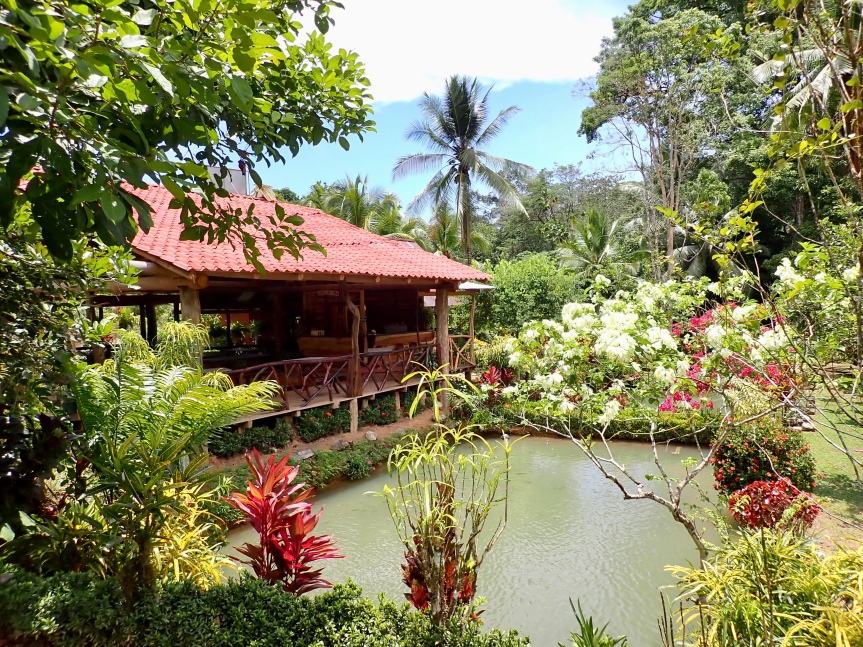 I had seen the matriarch of the family throwing a net out into the nearest pond when we had driven up. The tilapia from that cast were now freshly cooked and delivered to our table. PJ was skeptical, but the fish tasted amazing and they had fried up their own plantain chips to accompany the meal along with salad and a maduro. We ate slowly, savoring the meal and really enjoying being where we were in the moment. 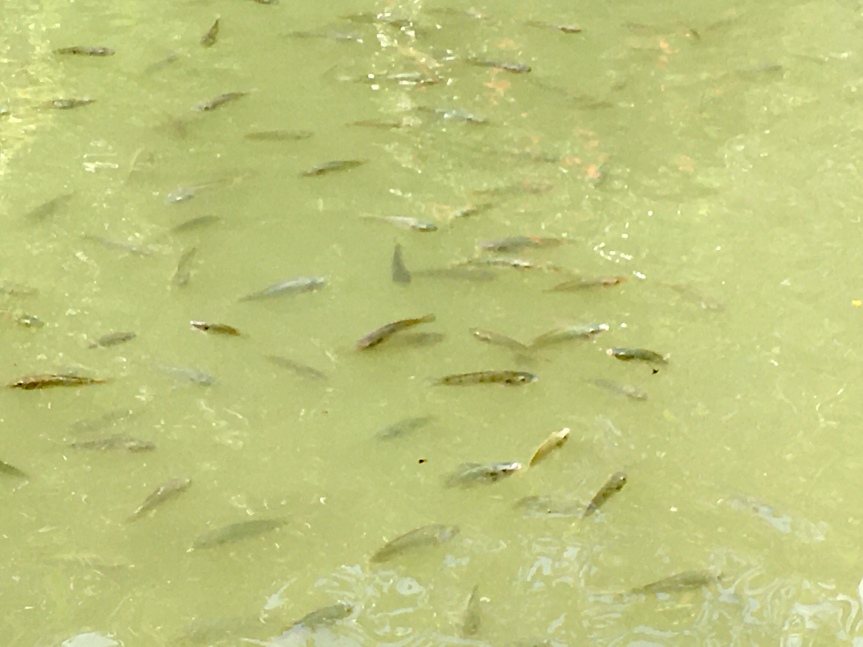 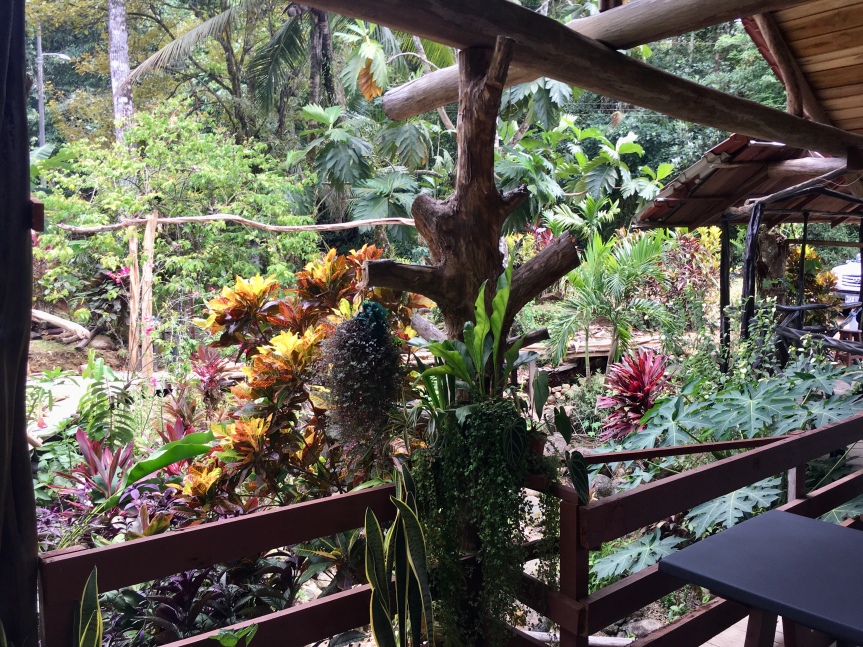 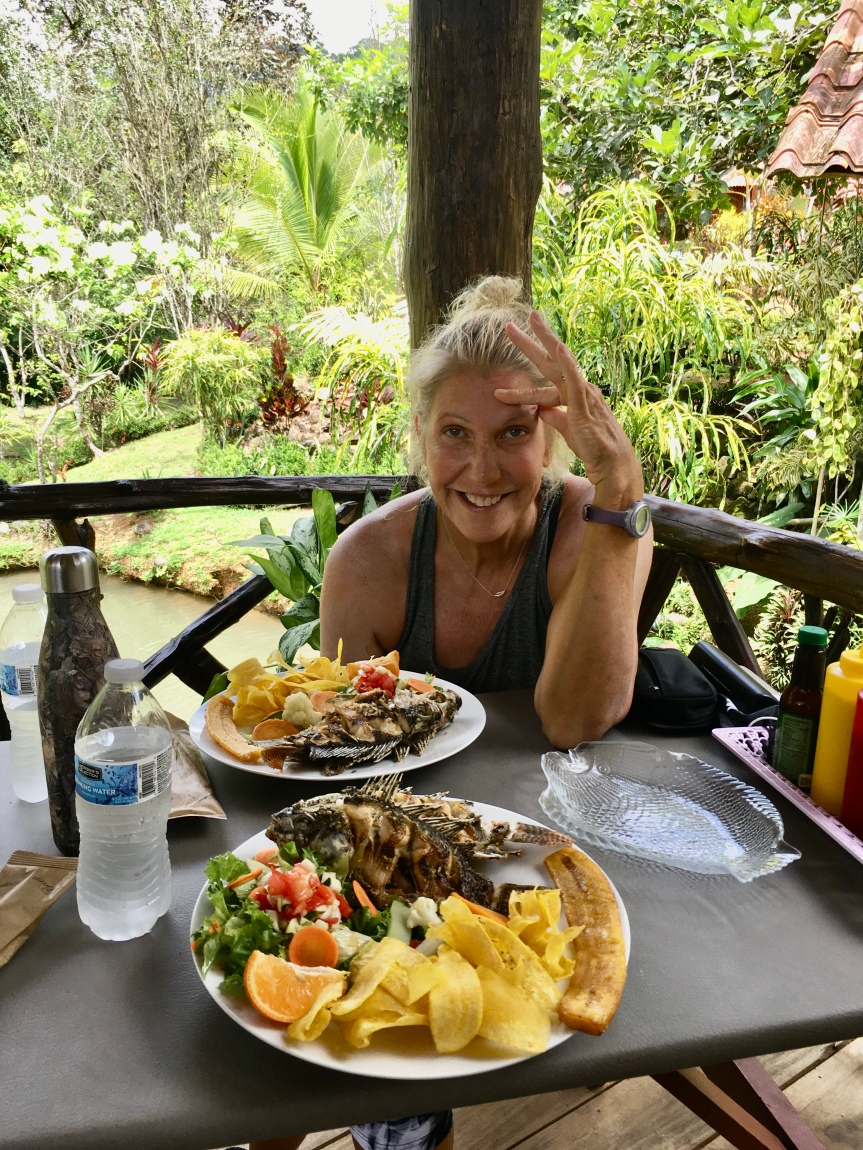 After the meal, it was either get up and move or climb into a hammock, so we said our thanks and slow rolled it back through the jungle to the Costanera and drove a few Kms back towards Uvita until we reached Playa Las Ventanas. We gave the girl in the shack 1000 colones to park and pulled in under some shade trees in front of the caves that run through the point at the north end of the beach out to the sea. At low tide, you can walk the caves to the water but the tide was coming up and the waves were breaking through the caves into the cove. Other tourists were poking their heads in and being chased out by the incoming surf. 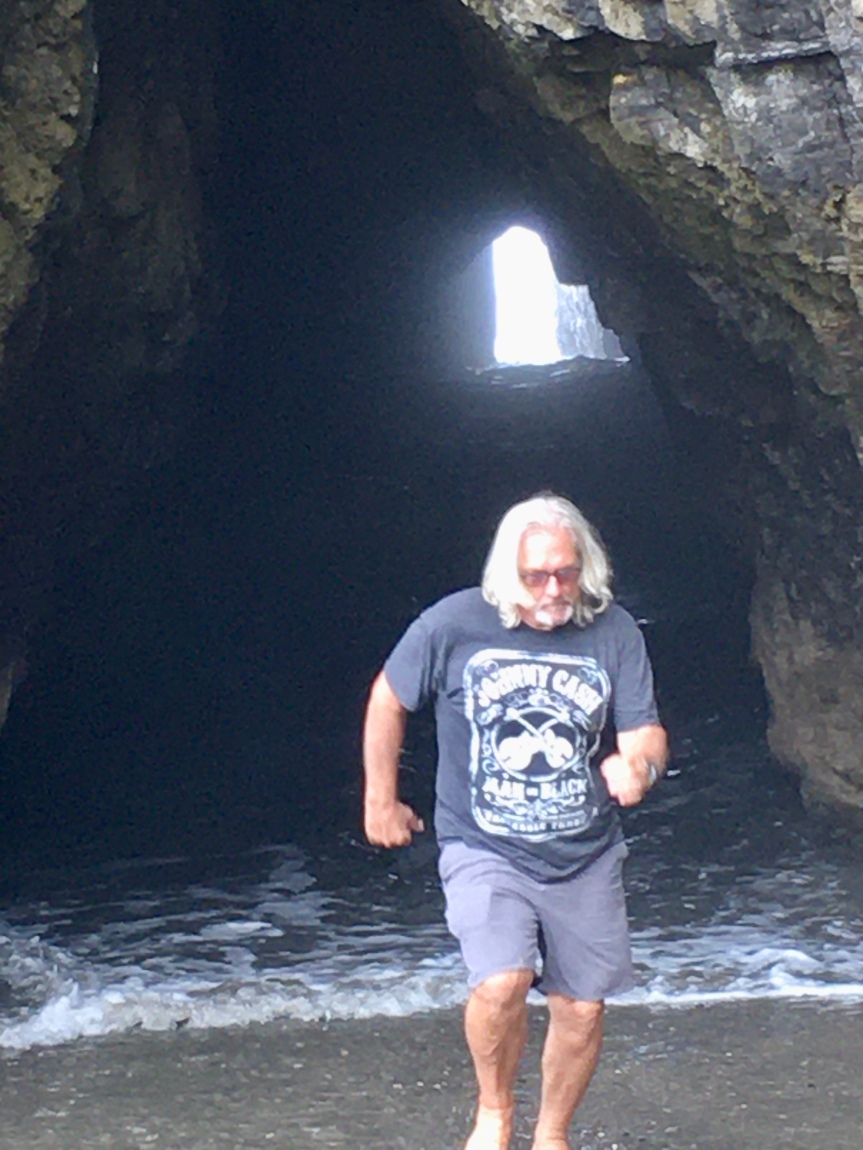 We walked the beach watching a few swimmers as the waves refracted off of the rocks at the south end of the bay. There were still a few beach goers lounging in the shade of the palms but the bulk of the vendors were closed and things were relatively quiet. We walked in the shade then sat in chairs back near the caves until the kids that rent them came and booted us out. No free loaders at Playa Las Ventanas!

Storm clouds were gathering as we drove back to the highway. We made another bank run in Uvita so we can extend our stay a couple of more nights. We followed some slow vehicles on the wet and curvy road until we got home to take it easy. The storm really broke loose and the rain drummed on the roof. Lightning flashed and thunder was rumbling but nothing too close. The power flickered on and off, staying off for maybe a half an hour at one point. A unique and enjoyable day.