……Or at least that is the claim on the tourist leaflets 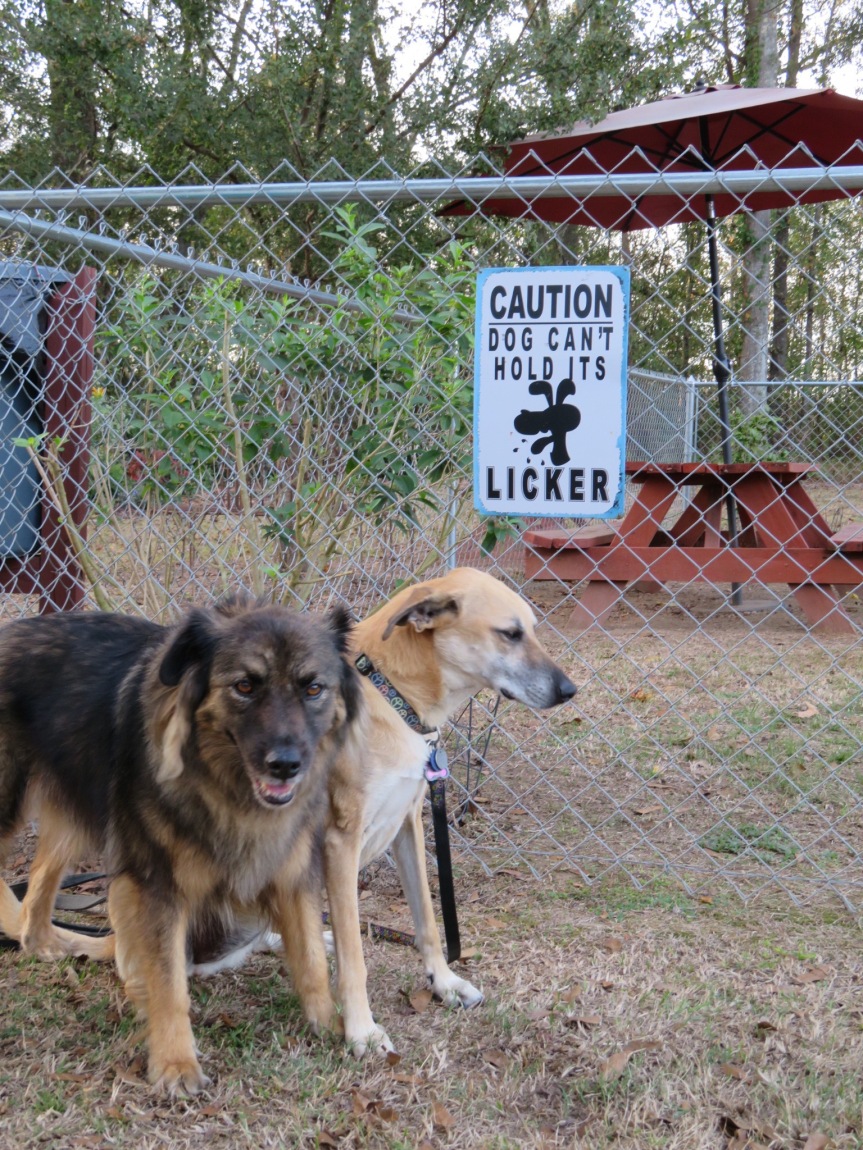 The lady at the tourist information center had recommended going to breakfast in the historic downtown section of Breaux Bridge. She pointed us towards Cafe des Amis saying that not only was the food excellent but that they also had live Zydeco music to enjoy as you dine. Excited to eat some crawfish, we saddled up the bicycles and rode the three miles down to the old town center only to find that Cafe des Amis has chosen this weekend to do some maintenance work and were closed for the day. Several other disappointed diners were turning away from the entrance and heading towards another French restaurant a few doors down 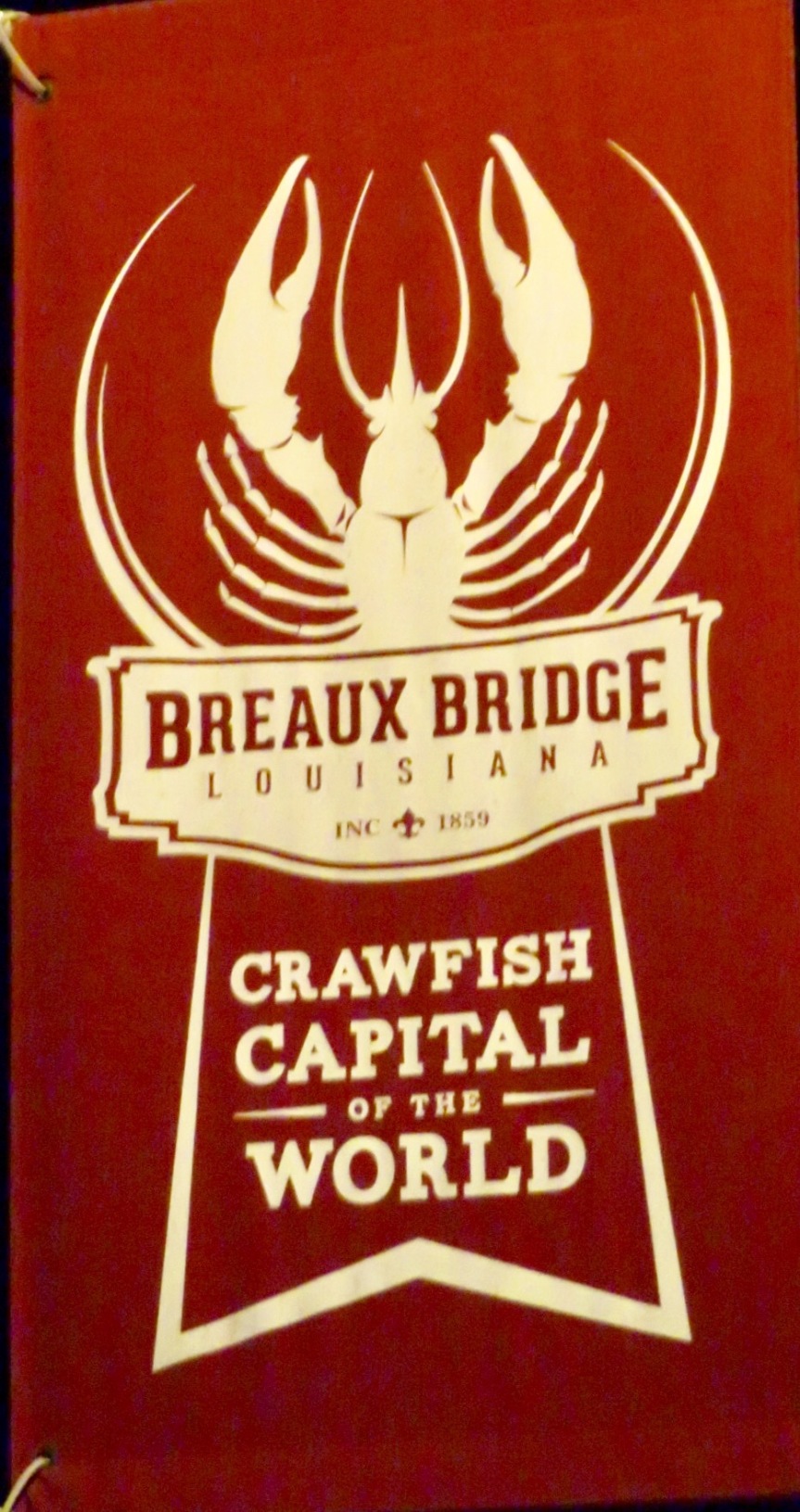 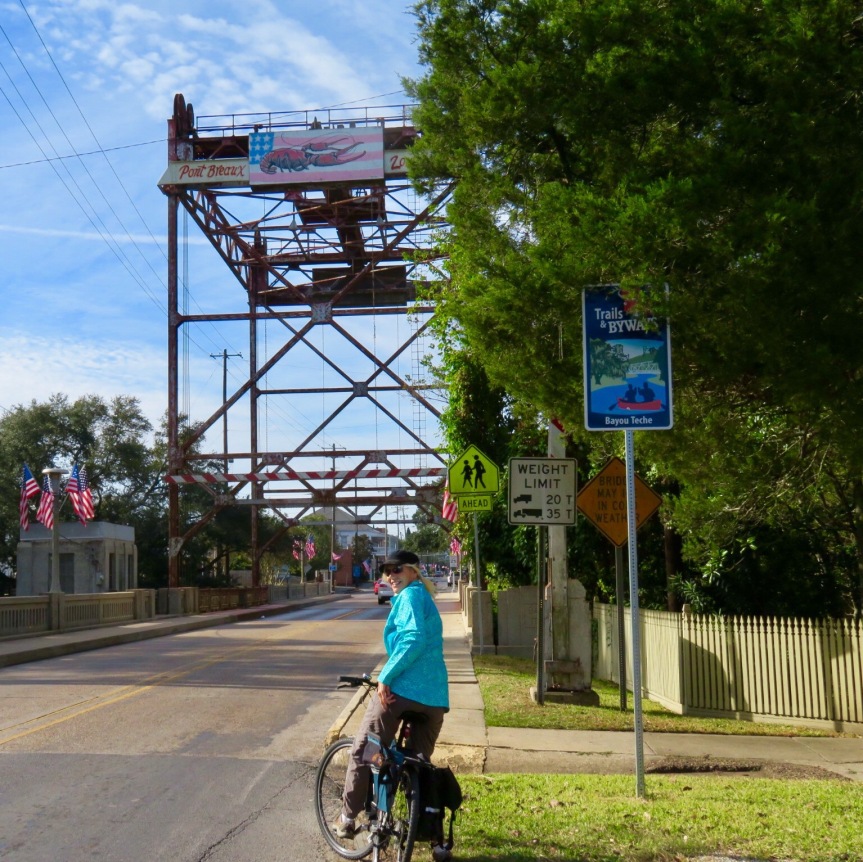 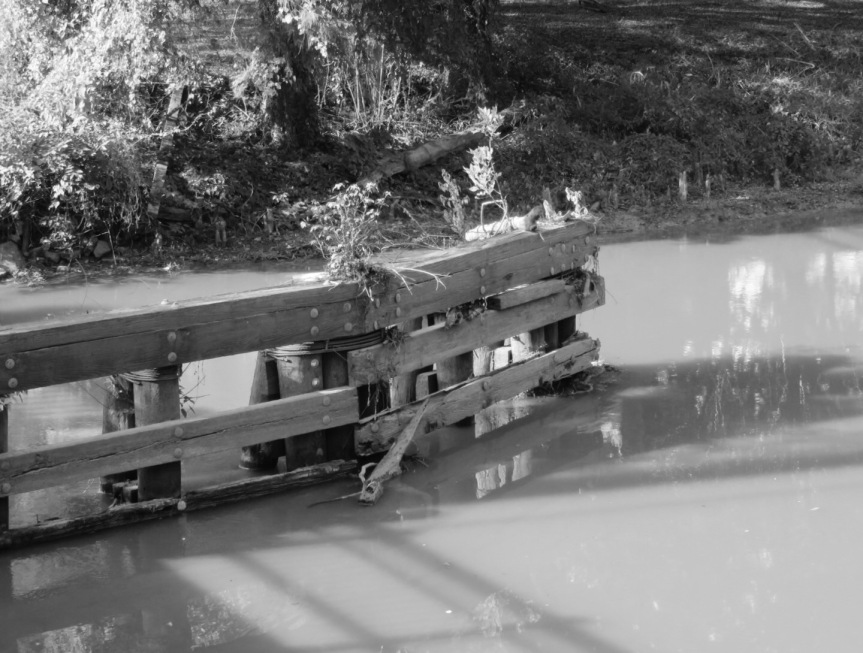 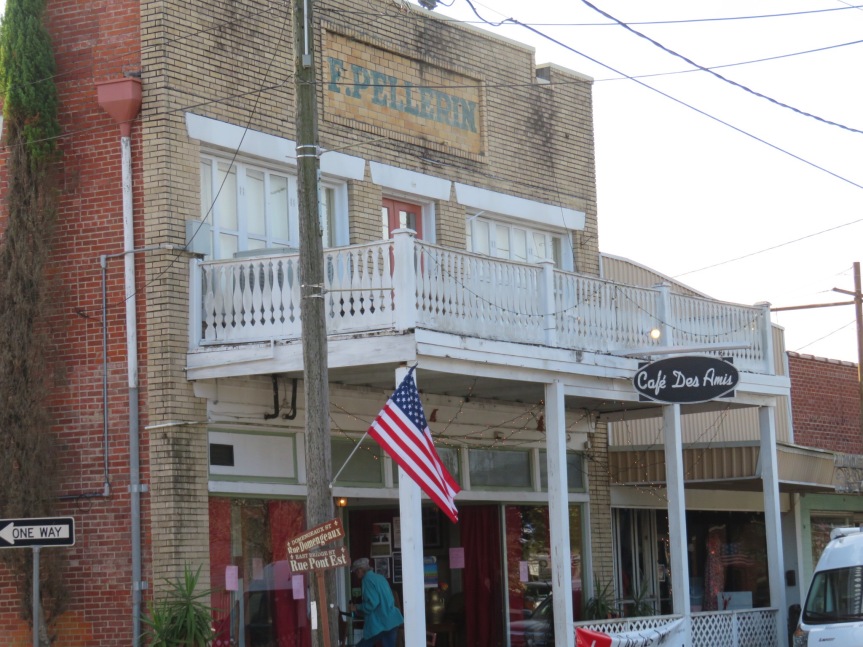 A solo woman was singing and playing an organ at Chez Jaqueline and the placed was packed. We found a patio table and staked out a spot. The staff were overwhelmed by the large overflow of customers they received due to Cafe des Amis being closed. Understanding this, we waited patiently for the waiter to at least swing by for a coffee order and maybe drop off a menu. Meanwhile, a few people were dancing and PJ joined in the festive activity. After about 25 minutes, I caught the waiter and asked to order. He said it would be an hour and a half before we would see any food. He was a nice kid and totally apologetic, but that was a little longer than I was willing to wait. At least we got in a dance or two. 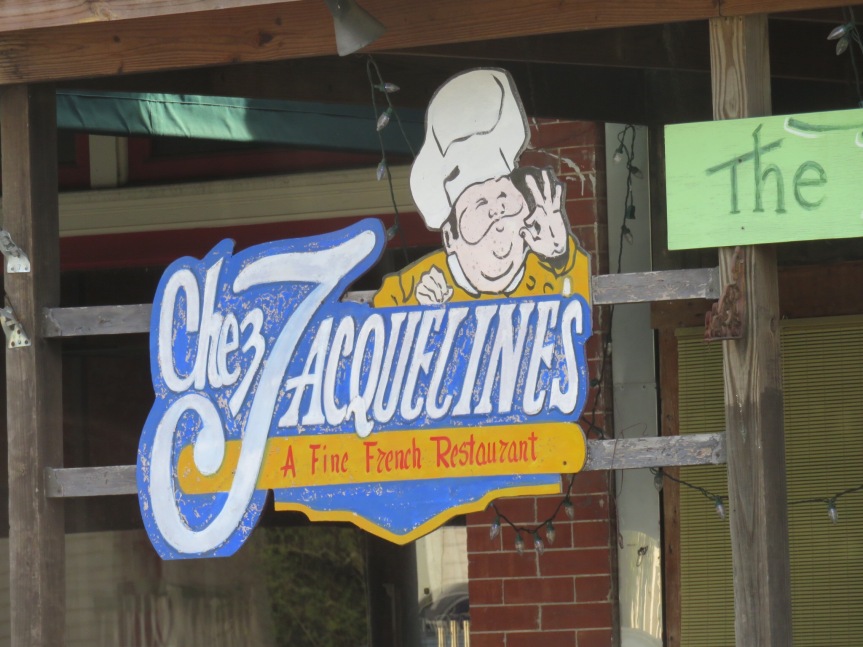 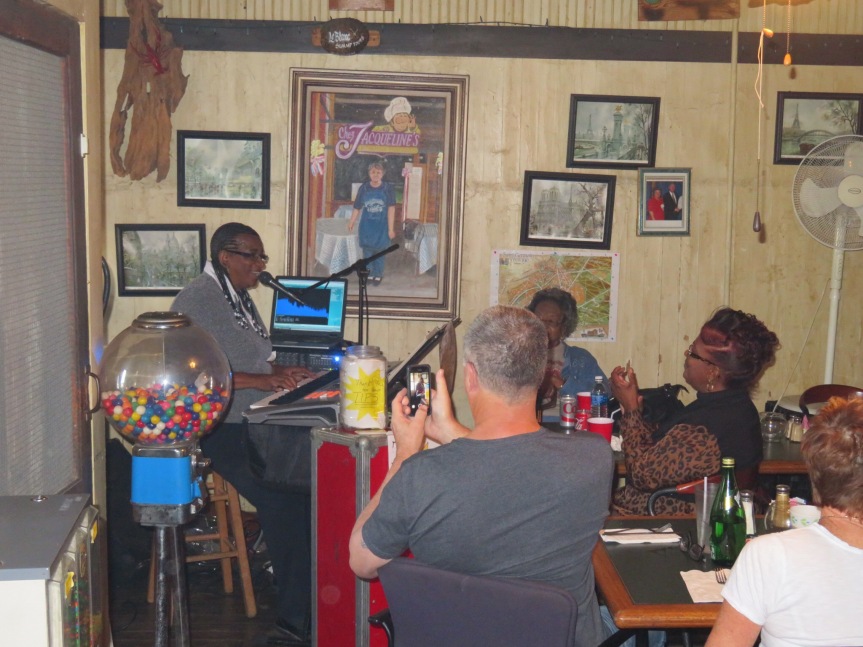 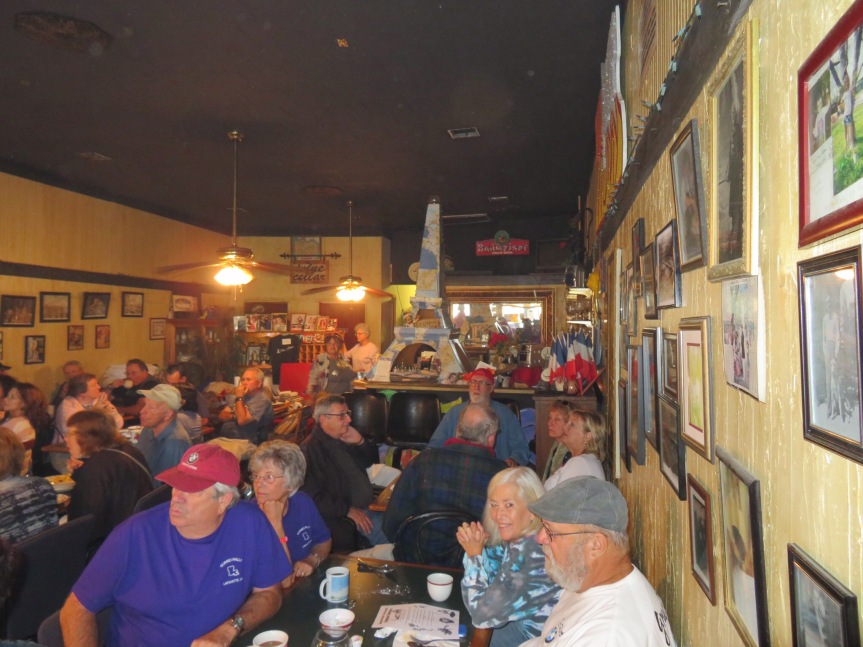 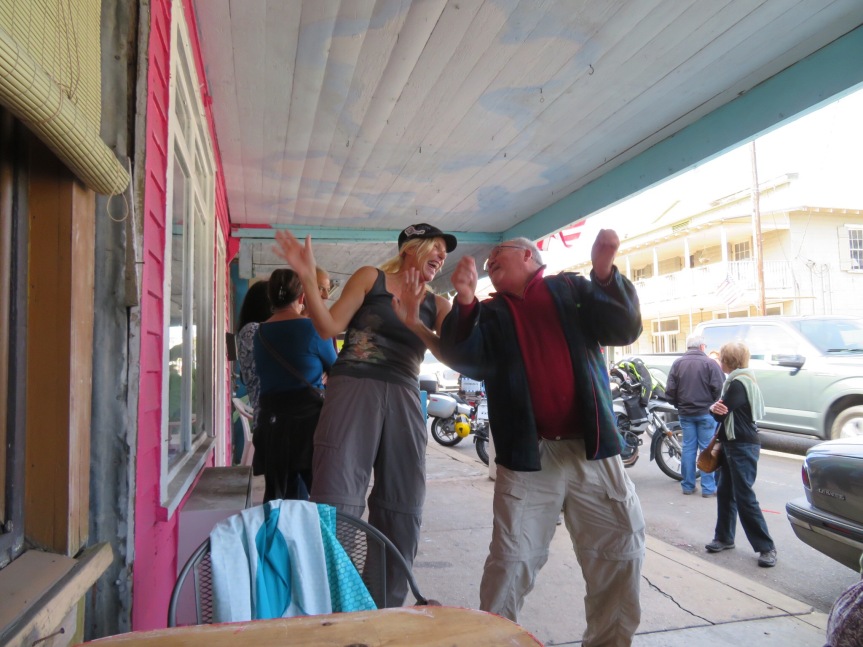 We hopped back on the bikes and rode a few blocks and PJ checked out a big antique emporium while I held down a bench outside. Next door was another little Cajun restaurant with a few open tables. Alright, finally I’ll be getting some breakfast. Musicians were piling in and tuning up their instruments. Live breakfast music seems the norm down in St. Martin Parish. We ask if it’s o.k. to seat ourselves and the young gentleman informs us that the large party of 10 hasn’t even gotten their drinks yet and that it would be at least an hour before any vittles would be making their way to our table. Fail number three. 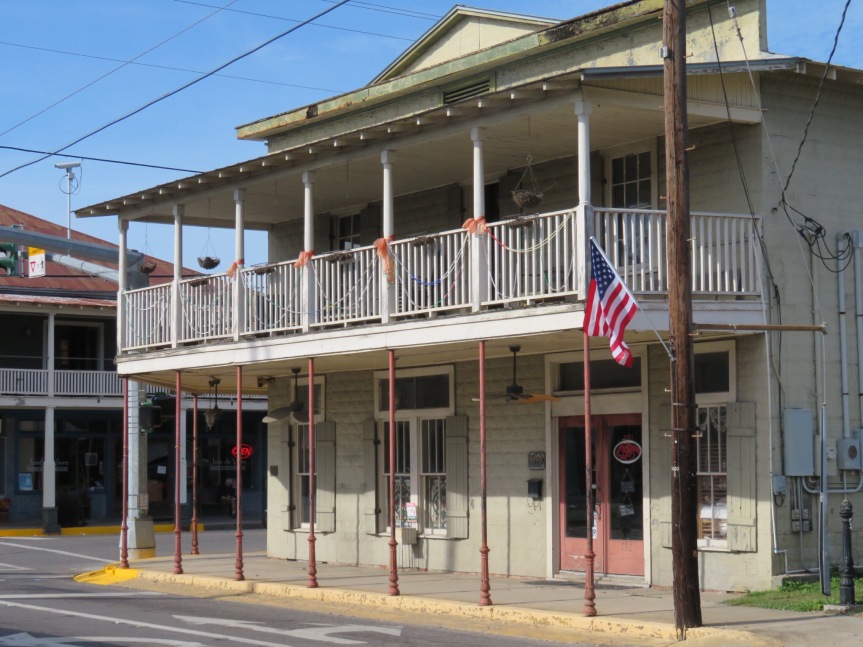 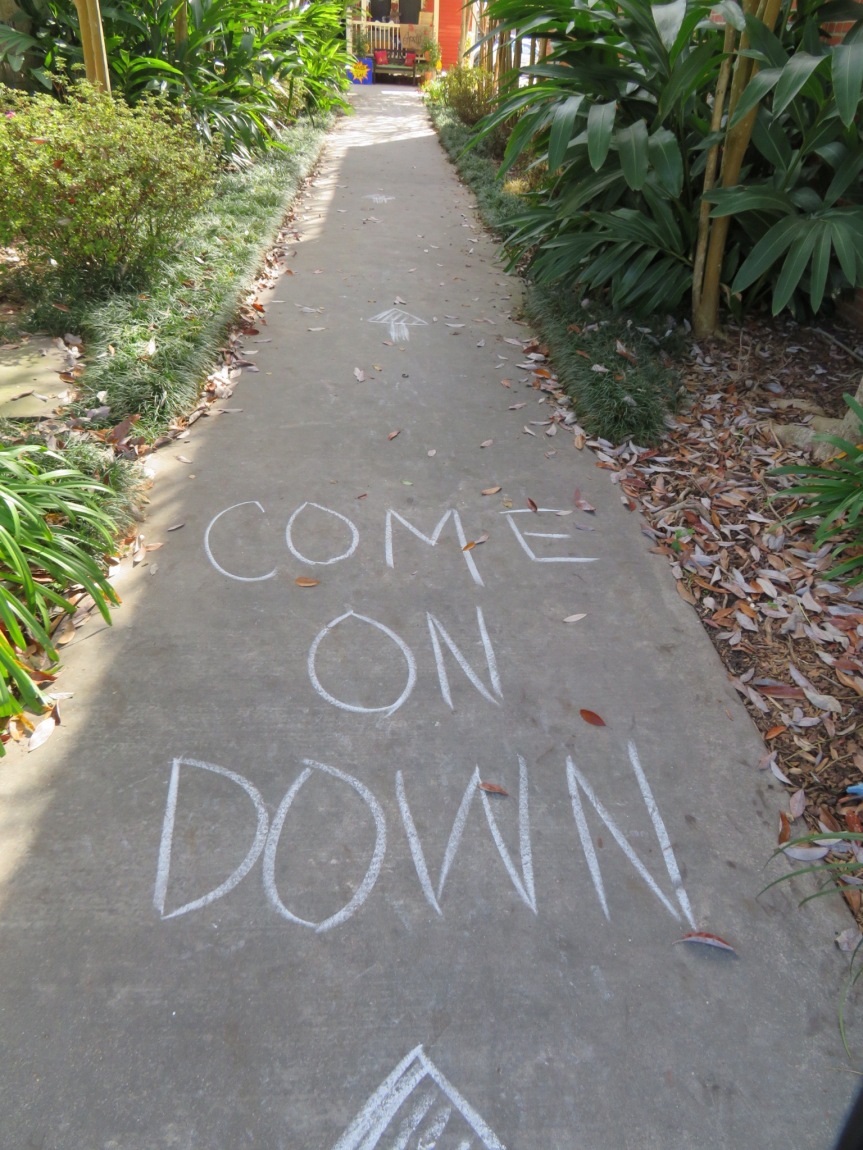 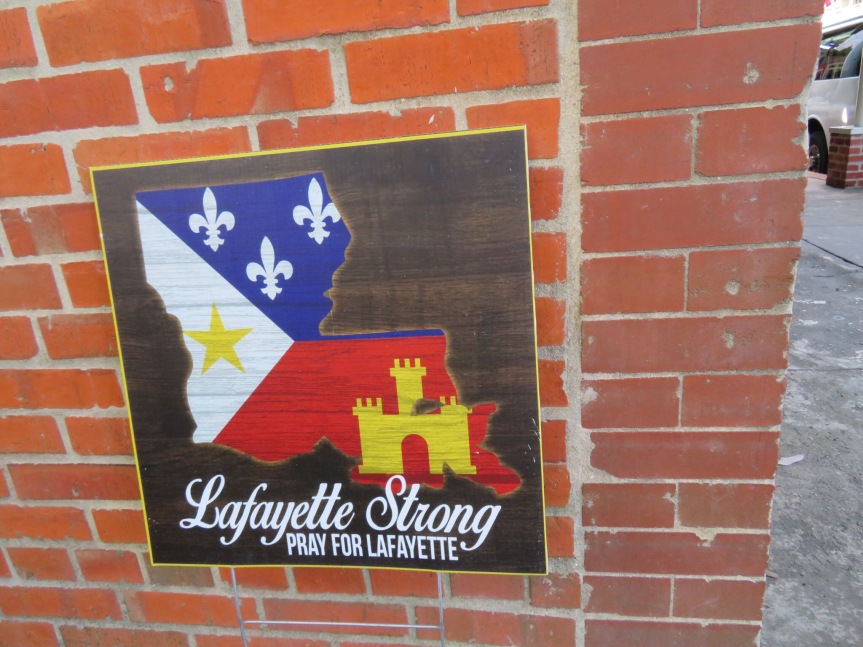 Pam wanted to go back to another antique store she had seen over near Cafe des Amis. I wandered over to St. Bernard’s Catholic Church across the street and had a few quiet moments at the grotto for Santa Maria. The parish had been recently restored and it was a beautiful bit of architecture. Home of the first St. Martin native to be a priest, Fr. Jeanmard. He later became a bishop for the area. PJ returned and we toured around the grounds and checked out the adjacent cemetery. The church was built in 1848 and many of the graves were from that era and earlier. Lots of Rousseaus, Heberts, Guidrys and Breauxs. And butterflies. One followed PJ as she walked among the tombs in the graveyard. The spirit of one long ago passed? 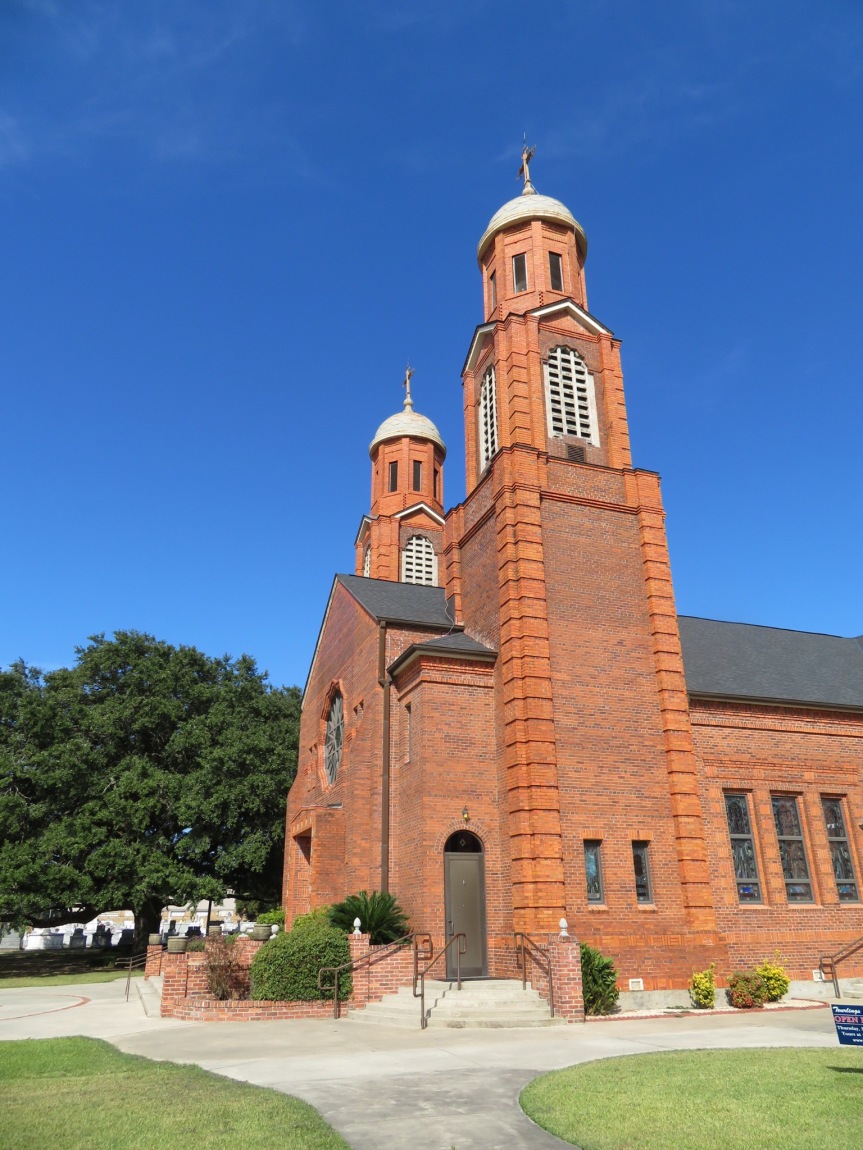 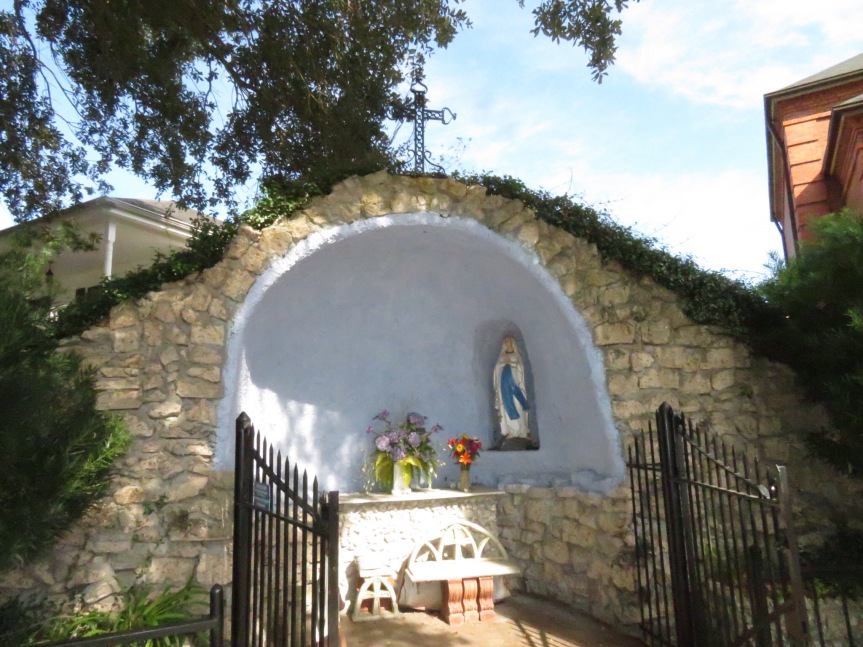 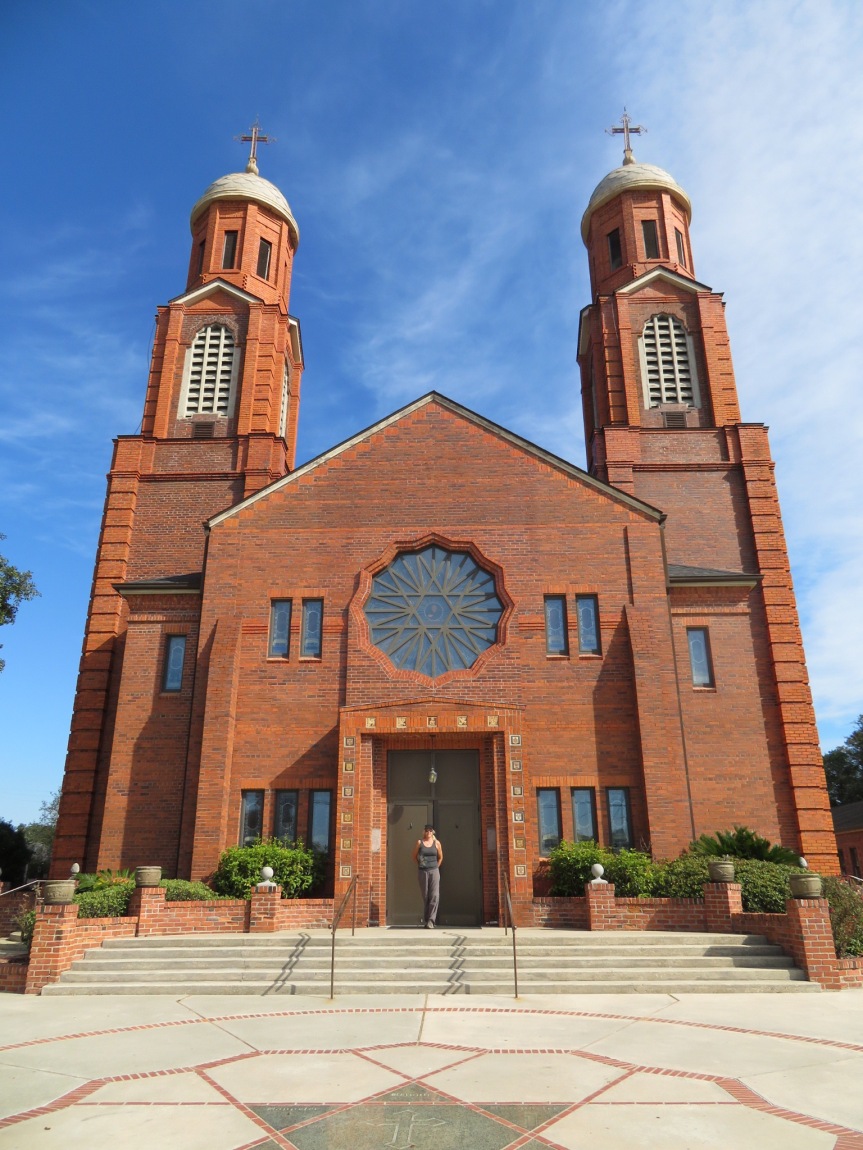 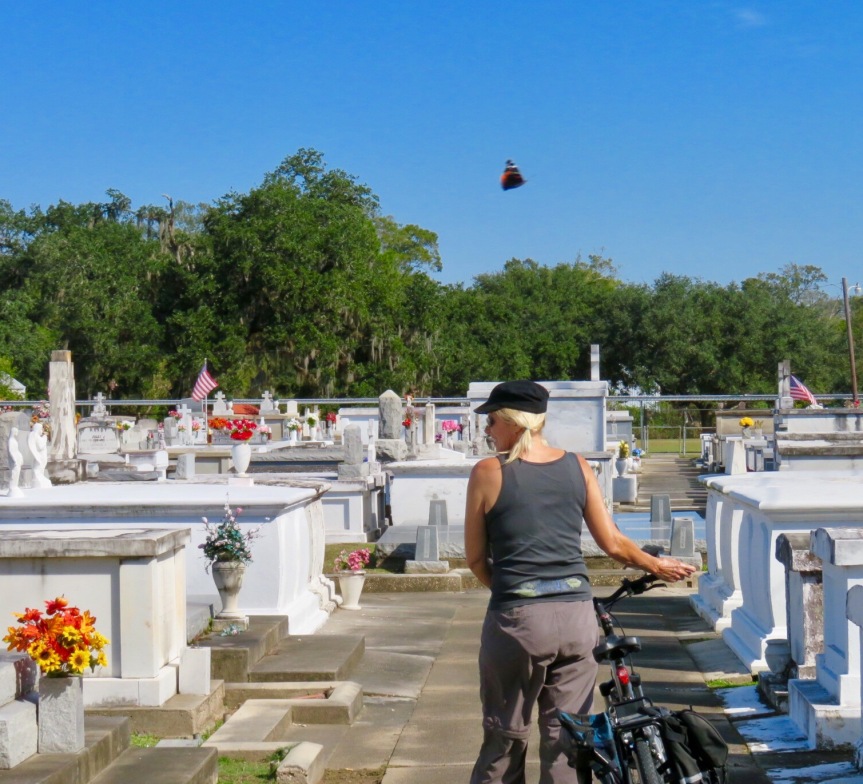 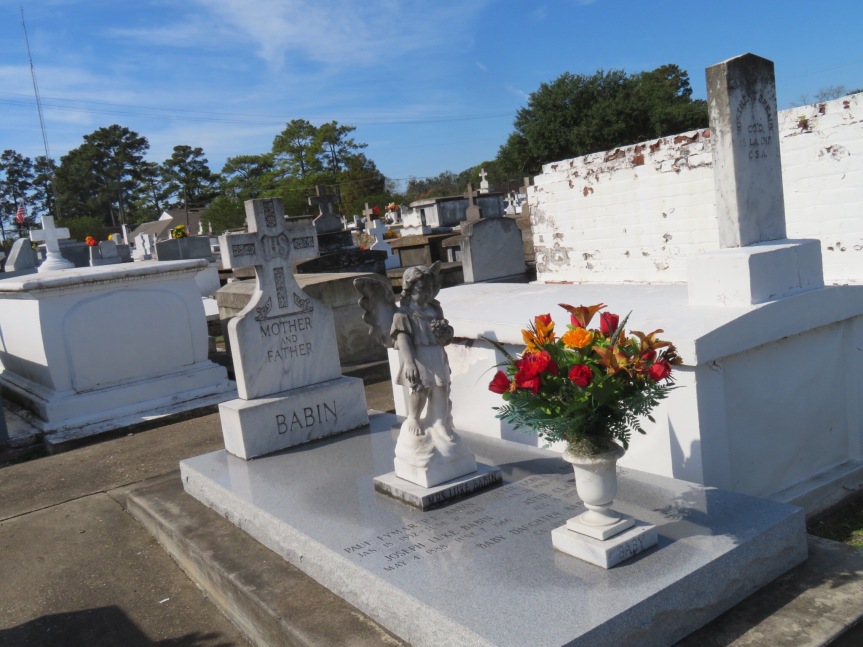 By now, it was after 11:00 and we still hadn’t found any place to get any sustenance. Anyone that knows me, can tell you that leaving me hungry is not a safe practice. We rode over to the Rees St. Market and got some groceries figuring to just go back to the RV and make some breakfast. On the way home, we came across a little shack cafe offering po’ boys and fried catfish. Not the etouffee I was hoping for, but it wasn’t bad for an early lunch. We split a large order of fried catfish, shrimp and fries while sitting outside in the shade. With our baskets and panniers loaded with groceries, we rode the bikes on back to the campground and organized the motor home. 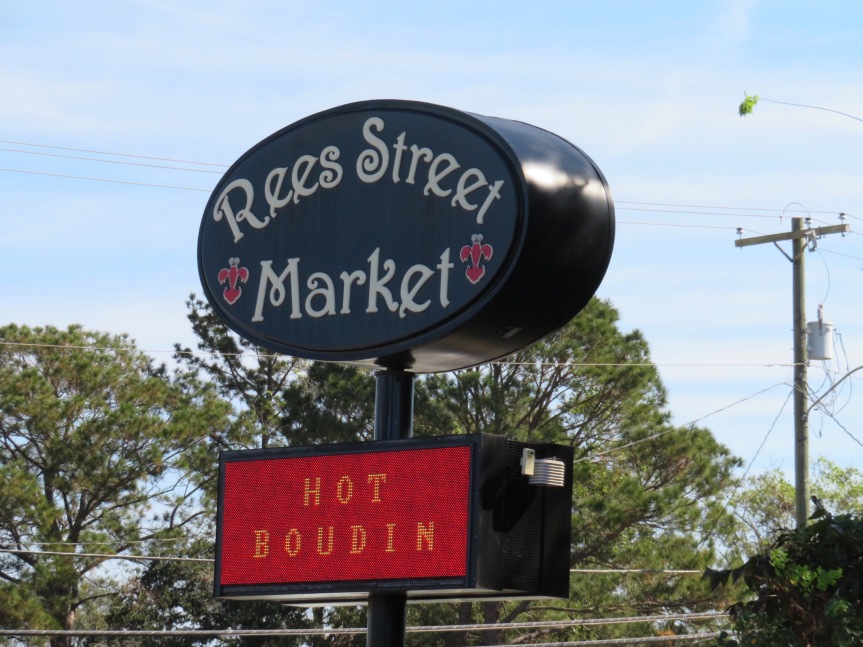 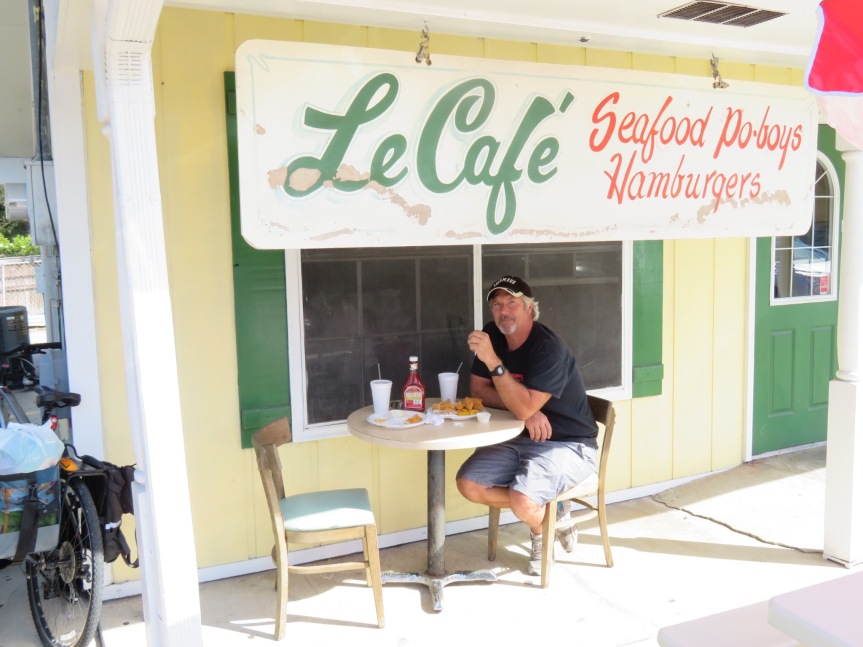 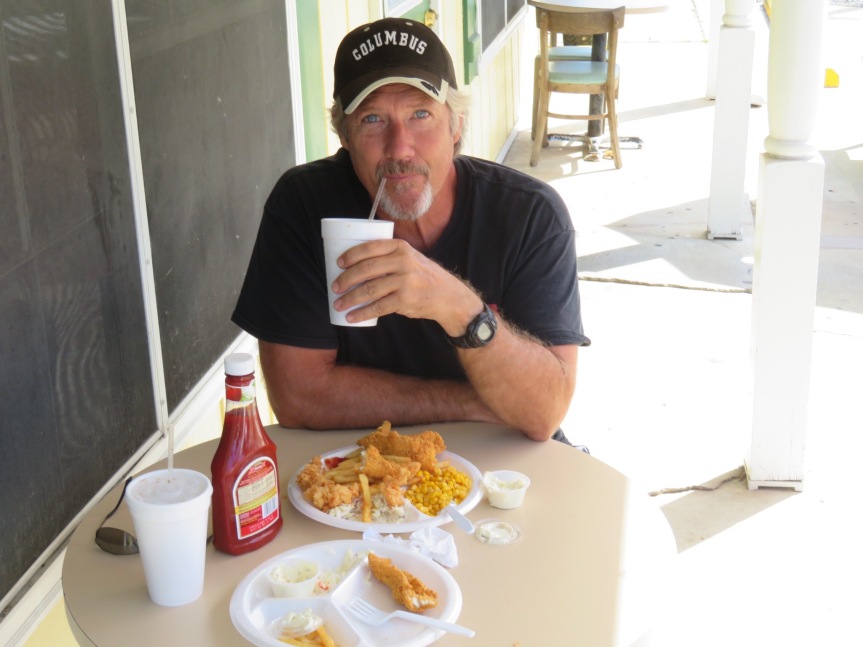 The shower has become a closet that we have stuffed all of our excess baggage into. Somehow the bottom had gotten wet, so we had to haul everything out and toss the plastic tablecloth we had down as a barrier and clean things up and then load it all back in. All this activity drove me inside to take a nap in the mid afternoon. 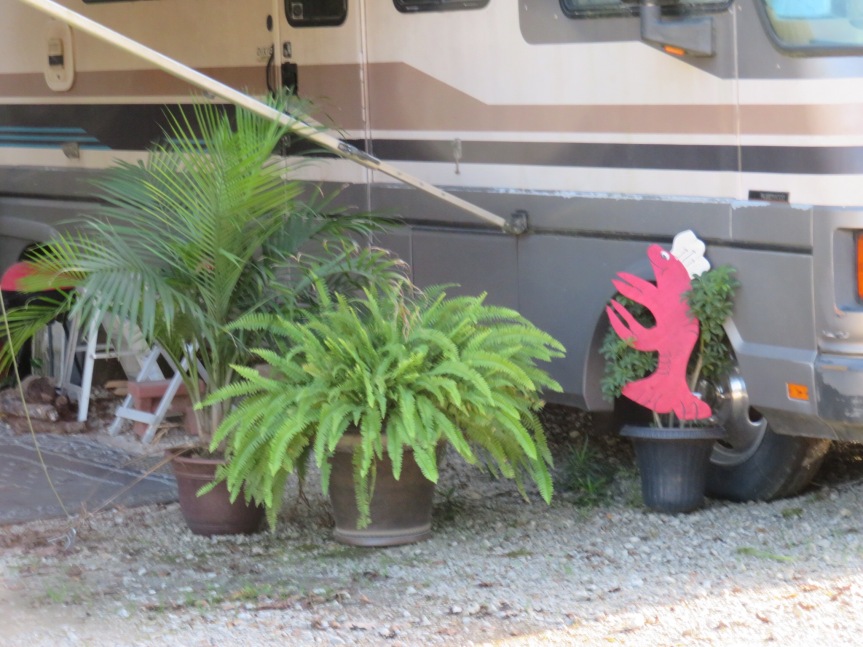 As the sun was setting, we took the dogs for a walk down by the river to see what the area had to offer. We hiked them around enough to tire them a bit, then locked them inside and walked over to the Crazy Bout Crawfish Cajun Cafe a few blocks up Rees Street. We weren’t really sure what to expect having ridden by it earlier in the day. I was thinking maybe a dark tavern type atmosphere, but when we walked up it was bright and colorful with paintings and decorations on all of the walls. The place was doing a lively business and we had to wait just a few minutes to get seated. The owner, Megan got us set up and we ordered the seafood festival platter and some red beans and rice to share. 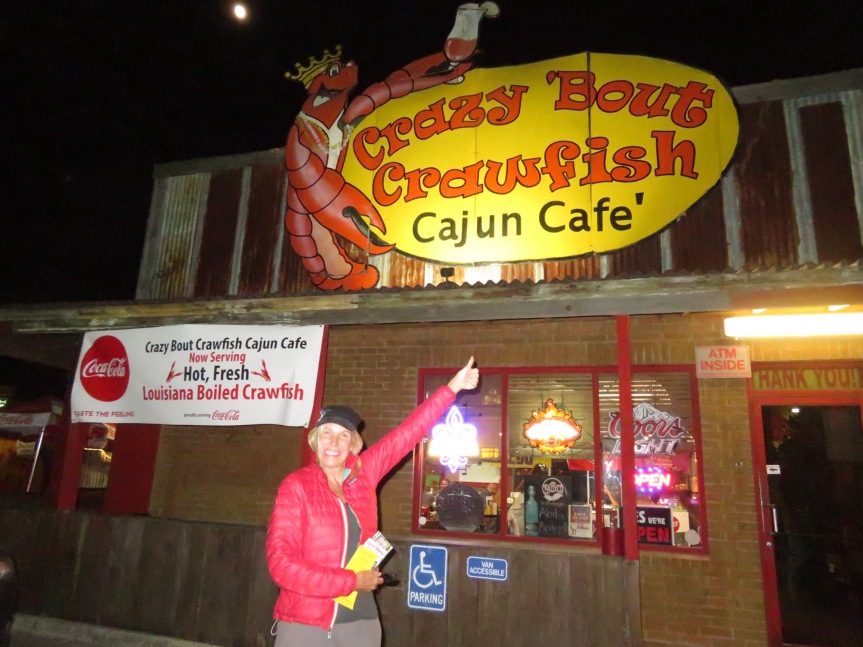 Many of the customers had huge trays of boiled crawfish and were doing their best to finish the generous portions. The LSU game was playing on the t.v. and we were goofing off taking a million pictures. The staff was super friendly and soon our platter arrived. We had to ask what some of the items were. Rather than roll her eyes, the waitress was happy to explain what each morsel was. Gator bits, crab cake, crawfish cake, crawfish boulette, crawfish maque choux, and a couple of other things I’m not sure of. I did recognize the catfish, shrimp and gumbo though. Everything was excellent. The red beans and rice were out of this world. Glad we decided to share because we were stuffed by the time we walked out of the restaurant. 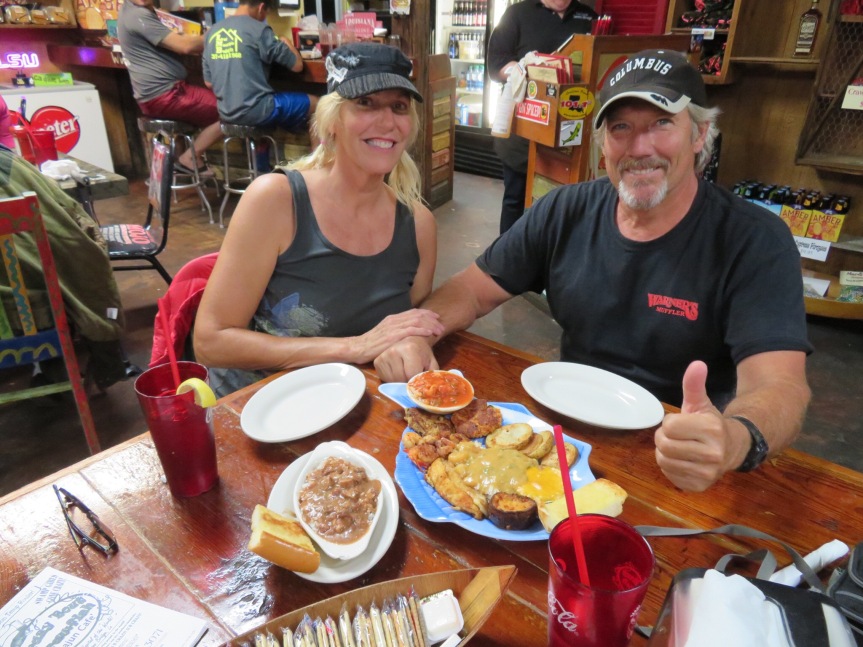 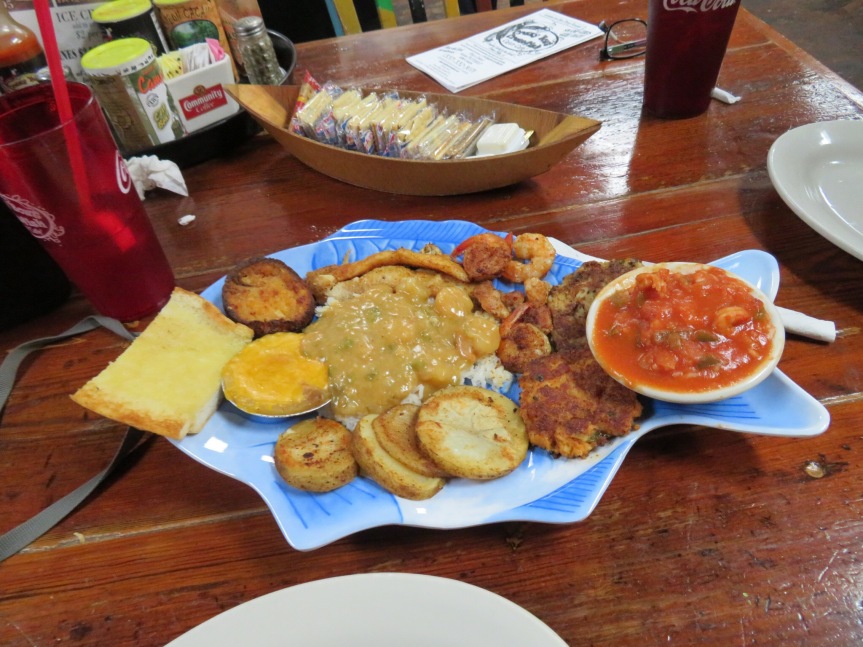 The moon was full and it lit up the potholed road as we walked back to camp. Feels good to move around and walk off our large meal. We let the dogs out and walked them all around the campground in the moonlight. We could easily spend a week exploring this part of Louisiana but Mexico is beckoning and we want to beat the main influx of Canadians and find a decent house to rent for the winter. 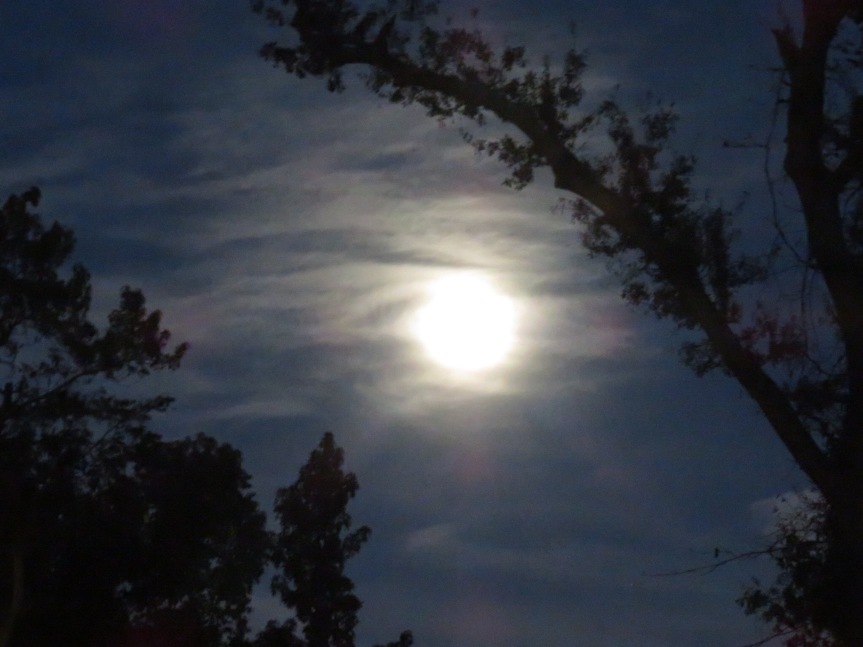