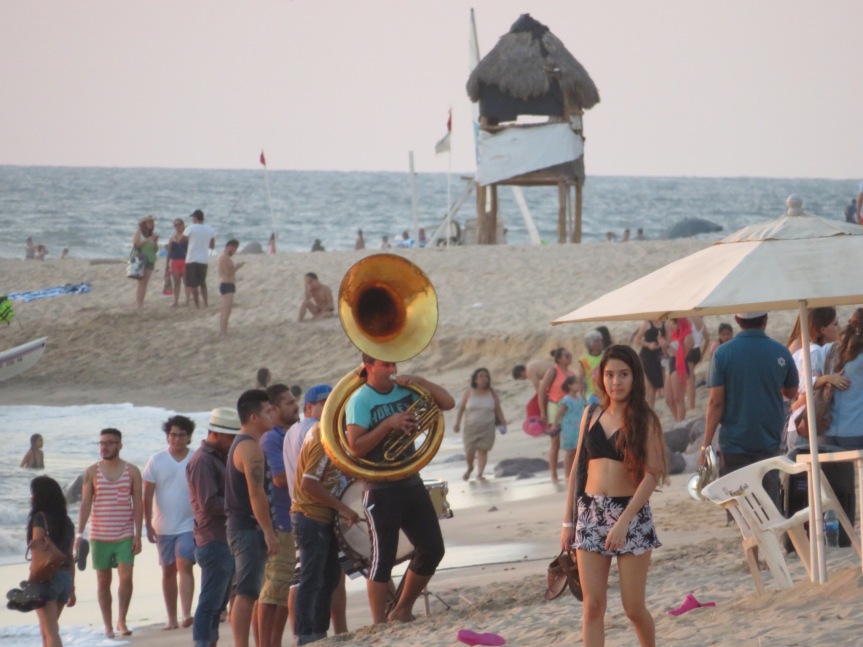 We rose with the sunrise and prepared to hit the road down to Mazatlan. Walked the dogs in the soccer field then loaded the crew into the land yacht and pulled out of our safe little harbor for the night. Stopped at the front desk and thanked them and left a colorful bowl of candy as a token of thanks. If you are passing through Durango and need a safe place to spend the night, stop in at the City Express. They wanted us safely off the road as much as we wanted ourselves off the road. The rooms looked decent and the staff went out of their way for us non-paying hippies. I can only imagine the attention they give to their paying clientele. Mostly businessmen in town for negocios so I figure they know what’s best. Thanks again, Jorge, Peter and the staff.

The road climbed up out of Durango into a pine forest at an elevation of over 8000 feet. Lots of climbing, up some pretty steep hills. The RV struggled on some of the inclines and I’m not sure that the altitude helped any. We were climbing the “Devil’s Spine”, a notorious road for accidents and an area known for growing marijuana and opium poppies. The scenery was amazing, forests of mixed evergreens and deciduous trees with outcrops of granite boulders. Long suspension bridges spanning deep chasms that looked like mini grand canyons. 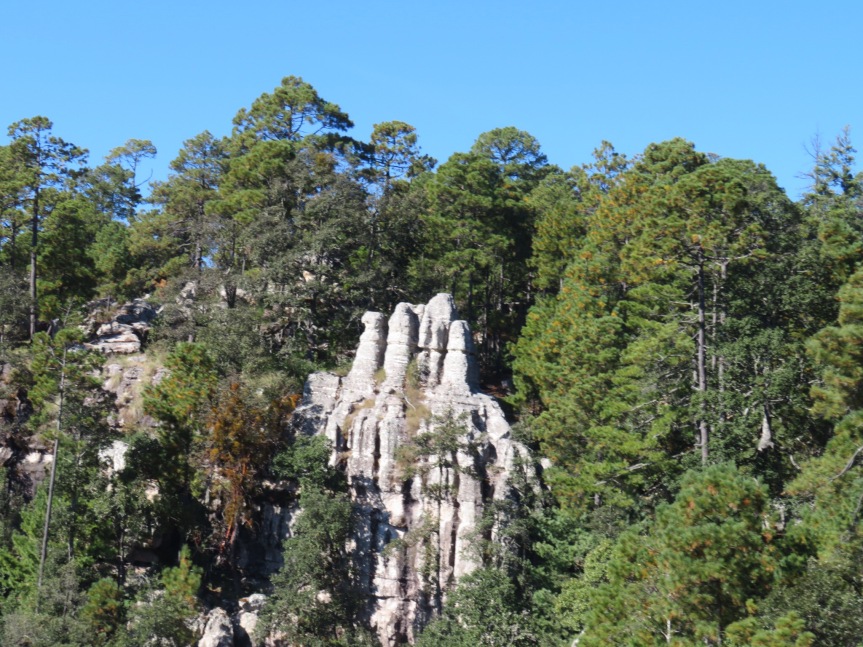 The new toll road features 115 bridges and 61 tunnels. It was wild, tunnel right after tunnel. Giant trucks passing each other on blind corners in tunnel after tunnel. They claim to have over ten miles of tunnels that we passed through today. Some really long, others short and sweet. The Baluarte Bridge is the highest cable stayed Bridge in the world. The drop if you should go over the rail is over 1300 feet to the valley below. The time passed quickly as the ride was stimulating and there was constantly something new to see. 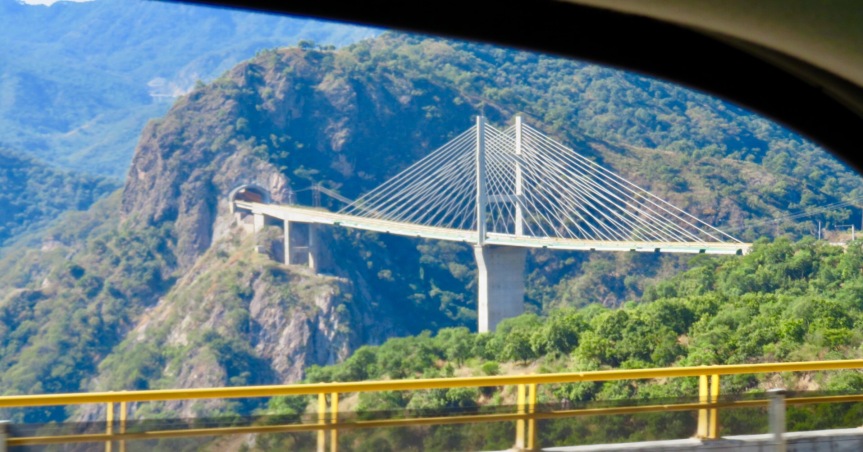 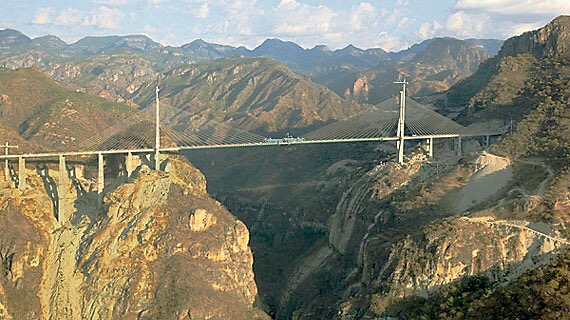 There was quite a bit of maintenance going on, so we had to sit a few times waiting for traffic coming the other way to pass through. Lots of soldiers, lots of trucks, quite a few buses and two gringos.

What goes up must sooner or later go down. After we climbed to close to 9000 feet the road took a steep and precipitous dive down to the coast at Mazatlan. I put the RV in a lower gear to help slow the descent and save the brakes as best I could. It was not so reassuring seeing signs saying go get out of the way of brakeless vehicles, then a big red line going down the middle of the lane with signs saying runaway trucks follow red line. The red demarcations would inevitably end at a big gravel piled uphill safety ramp. 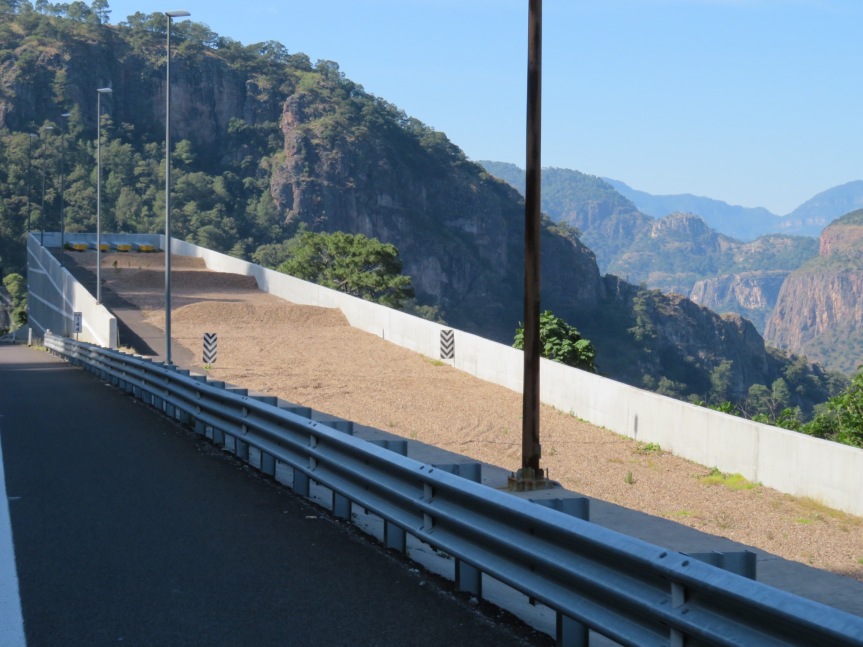 The ride was a blast and knowing that the beach waited at the end along with multiple days of no driving made the day’s atmosphere much more upbeat than the past few stops. Soon the pines gave way to jungle and the air became hot and humid. Soon a salt breeze could be smelled and we took our exit into the Zona Dorada. We threaded our way through the traffic on Camaron Sabalo and soon came upon the Mar Rosa trailer park. We were worried that they might not have room, but when we arrived the place hardly had any travelers. 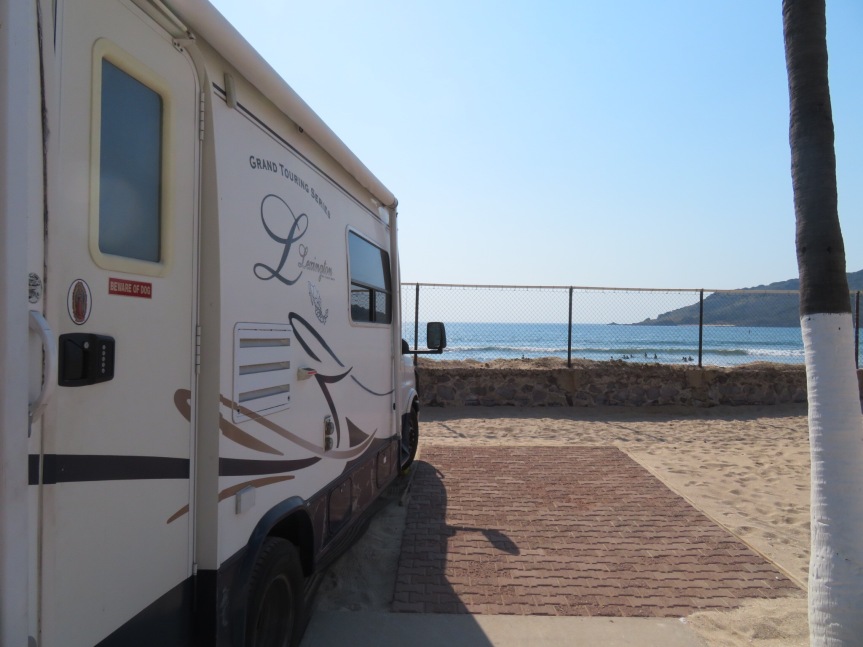 There was only one other camper set up on the front row, so we had our pick of spots. We took one over near the far end and set up camp. After getting everything set, we took a walk down to the bank and pulled out a few more pesos. An older woman was selling woven baskets outside of a store we visited and I wanted a small one to hold the ever growing pile of peso coins we were accumulating. We dusted off our rusty bargaining skills and PJ accepted the second counter offer. Two cool little baskets for $2.50.

There was an outdoor seafood restaurant across the street from our campsite and we were feeling a little hungry from all of that hard driving, so we dodged traffic and ran over to order up an early dinner. Jose was our waiter and took good care of us. Killer shrimp tacos and PJ ate the quesadillas. 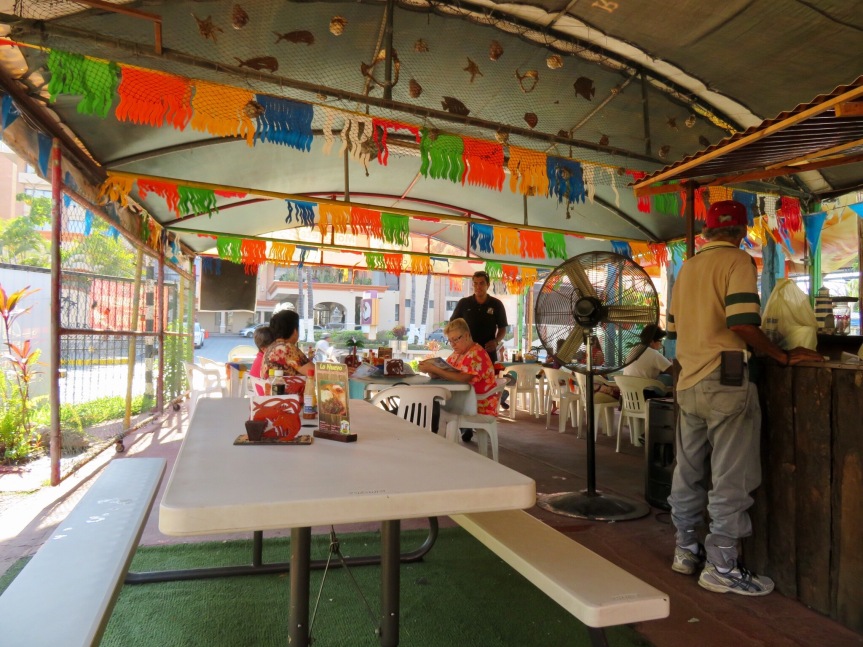 With all of the business out of the way, it was finally time to take a dip in the warm blue Pacific. There are quite a few Mexican tourists in town for the weekend since Sunday is the day for the annual Mazatlan marathon, a pretty big deal in town. We took the dogs out with us and they swam a bit then harassed the other bathers at the beach. After Koda tried sneaking a sip from a guys Ballena, we decided to take them back through the gate and sit around on our patio to let them dry off. Water was 82 degrees and the air 85, perfect for a lazy afternoon plunge. 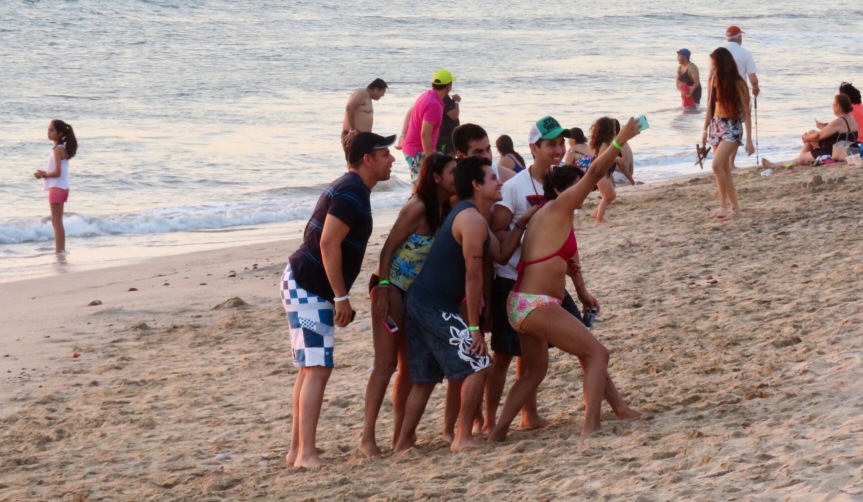 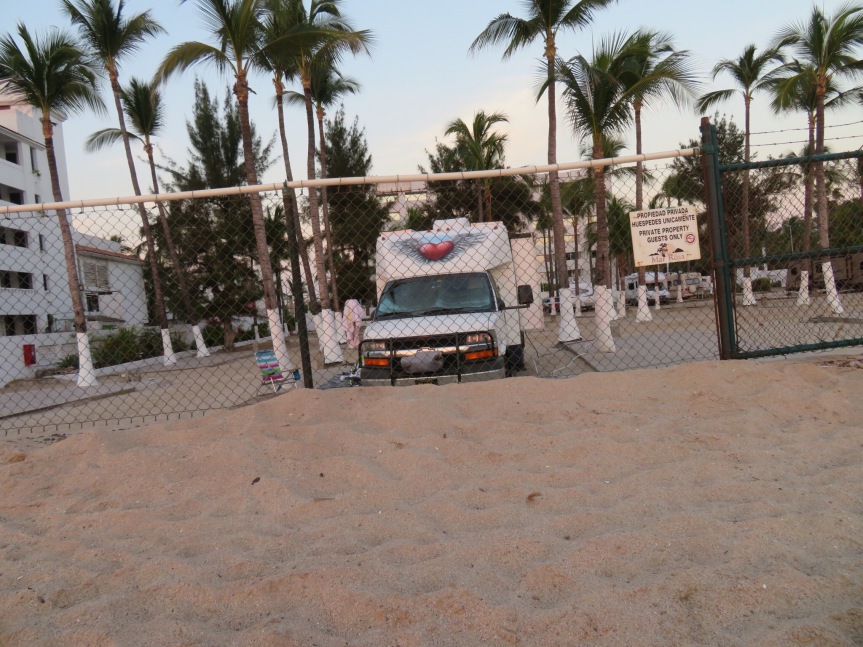 Sunset was off the charts with tons of people out wandering the beach and taking photos of the suns brilliant finale behind the islands sitting just off shore. 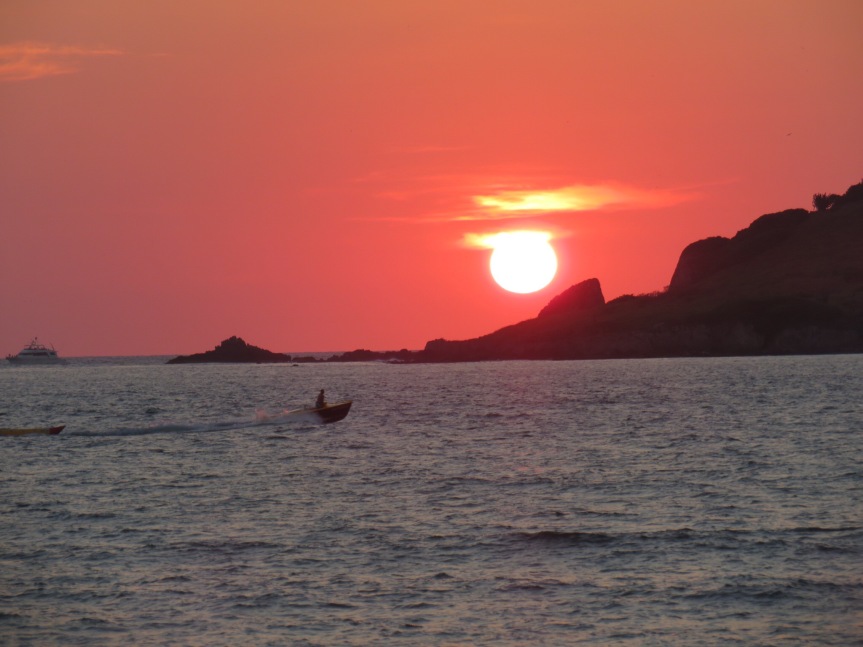 Relaxed outside, then showered, then relaxed outside some more. Walked around looking at the other open spots thinking that we might relocate tomorrow to face away from the big hotel to the north. Moved inside near bedtime and downloaded the mass of photos we took today and did a little writing. Feels like we finally made it to a new milestone in our travels. We were filled with gratitude to be safely sitting under a palm tree camped right on the sand.