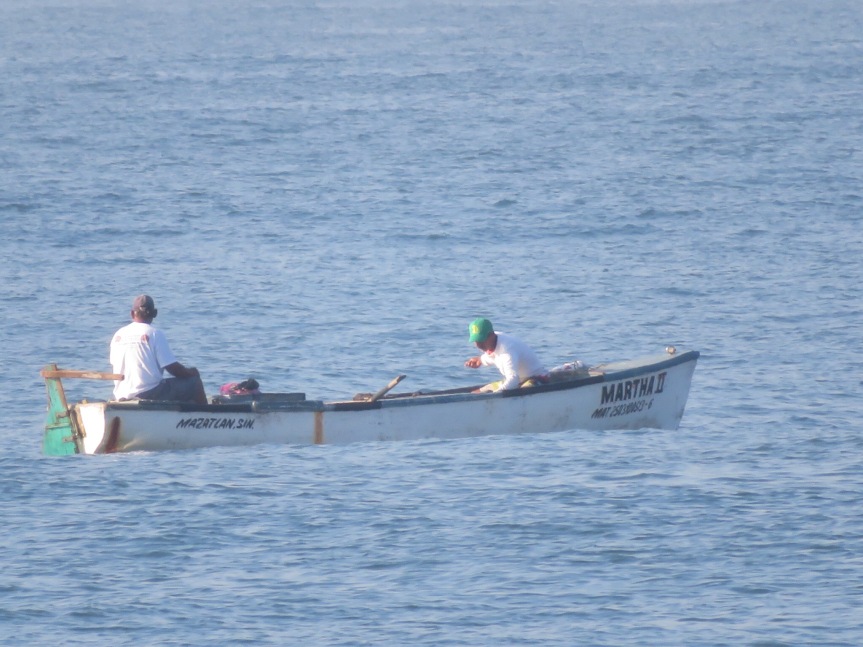 The day unfolded slowly and seemed to set its own leisurely pace. I was sipping tea in a lawn chair on the shady side of the motorhome while PJ practiced her yoga with a dog underfoot. The tide was high and the locals walking the beach had to traverse the steep sand up near the fence. I had a front row vantage point as the incoming waves would catch some people unawares and give them an unplanned rinsing. An older fisherman was having no luck out front. He was using a bleach bottle as a reel to wind his line around, a used spark plug was his weight. He swung the hook, bait and spark plug around and round over his head then let it fly landing it a fair distance out into the surf.

We met another one of the campers that had arrived yesterday, Mike with his giant Great Dane, Marley. I’ve seen taller Great Danes, but none as thick around and healthy looking as Marley. The dogs warily sniffed around the oversized canine. Marley was totally mellow and soon the three of them were playing freely around the campground. Mike and his wife, Peggy caravanned down from Golfo de Santa Clara up in Sonora with Bill and his wife, Cecille. They own homes up there where they spend the winters. This year they decided to take trailers and tour throughout Mexico and then down to Belize.


When the tide dropped a little, we took the dogs out for a walk down the beach. Monday morning and most of the crowds have disappeared. The dogs had a whole stretch of beach to themselves. They ran around chasing each other and after a while, Mike and Marley came out onto the beach and the three of them chased each other around. Crazy watching the massive Great Dane cavort like a puppy.

I had been checking out the little fedora hats that the beach vendor had been carrying around in a big stack on his head for the past few days. Since there were very few people on the beach, we stopped him and I bargained for a hat, then PJ decided to get one also. Francisco and I haggled back and forth and we got them for a fair price. We were happy and he was happy which is the art of the negocio. If you have a sense that you’ve been cheated or the seller feels like he’s been worked, someone leaves unhappy.


We locked up the RV and flagged down a pulmonia and headed to the centro. Where ever we end up we’ll have to get ourselves one of these things. It’s a blast riding down the malecon with the breeze blowing your hair and a birds eye seat to all of the goings on along the waterfront. Our first stop was the Merida Guayaberas shirt store near the central market. Tried a few on and settled for a subtle tan colored classic Guayabera with embroidery down the front alongside the pleats. From there we walked over to the cathedral and wandered through the little park across from it.

After that, it was on to the central market, a huge city block of vendor stalls, butcher stands and vegetable sellers all under one giant galvanized tin roof. The second story houses rows of little comedors, small restaurants that rarely see non-locals as patrons. As budget as they come with plastic plates and rudimentary cooking facilities. A guy looking for hand outs was singing an acapella ranchero song full volume and a little off key while holding out his hat. At first PJ was a little sketched, but she relaxed and rolled with it. 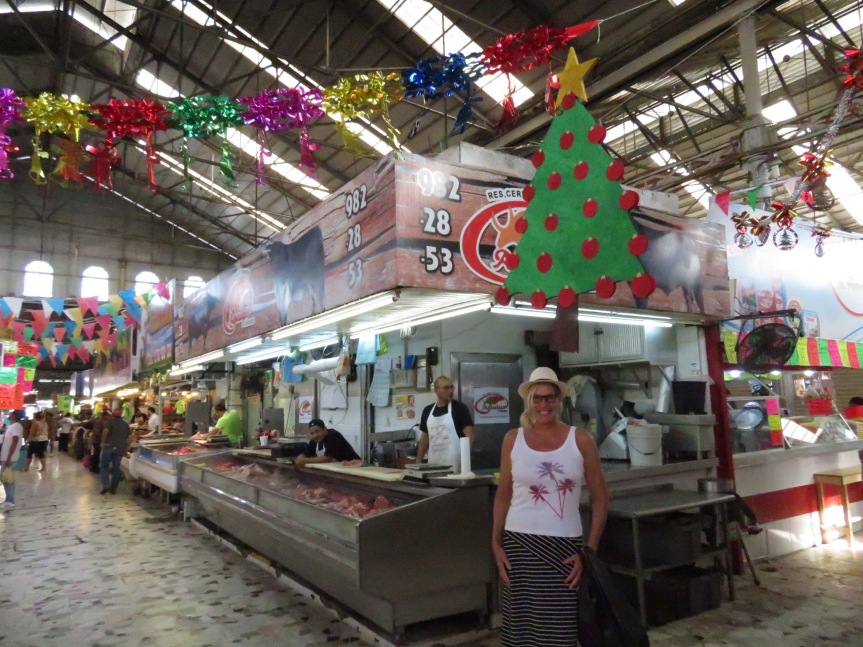 We chose a stall with a good sized crowd in it hoping that it was a positive sign that the kitchen put out some good fare. We drew a few surprised looks from the locals as we ordered up some lunch and a couple of cold cokes with straws in them. 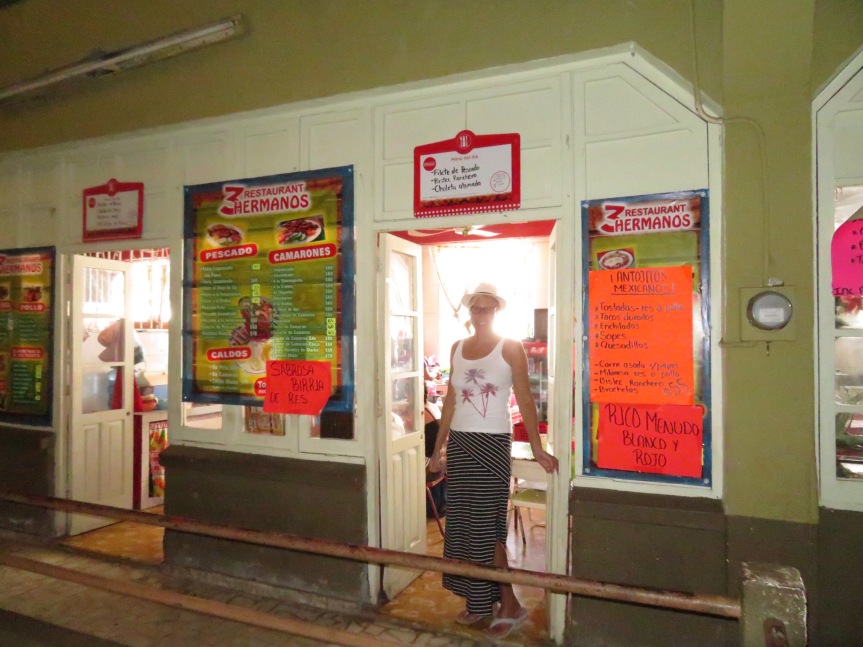 With food in our bellies, it was time to shop. We roamed around the stalls buying a tablecloth at one stand, a Mazatlan cap for PJ at another and a few other items that we came across. Definitely a workout for the bargaining skills. We hit some fruit stands and bought bananas, papaya, pineapple, granola and some chia seeds. We bought the plastic mesh bags that Mexicans are fond of using for carrying their purchases. I got one decorated with a print of Emiliano Zapata and PJ’s sports an image of the Virgin of Guadalupe. We crossed the street to the Parisiana store and bought some new sheets and a better mat for keeping sand out of Lexi. $10.00 for both. Loaded down with purchases, we hailed another pulmonia and had another cruise along the malecon back to Mar Rosa. 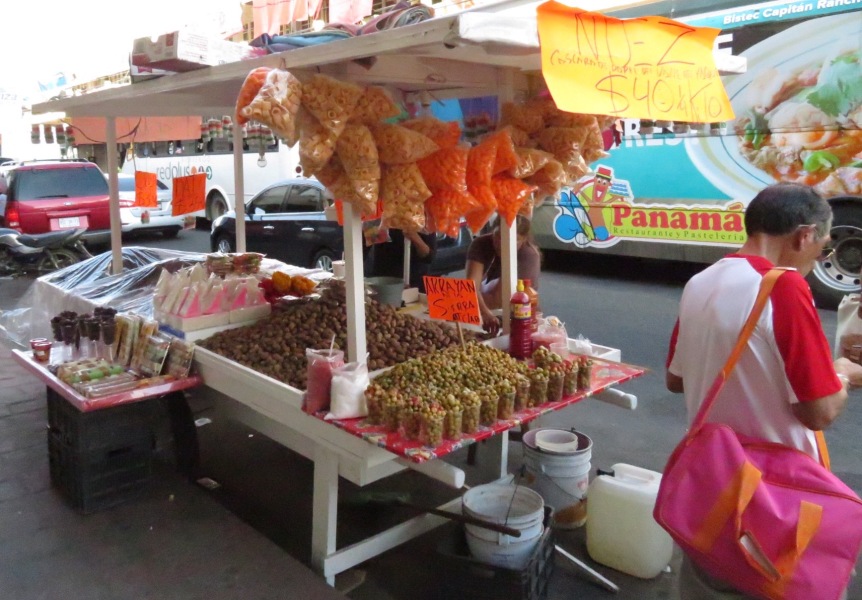 Upon our return, we sent our laundry off with the lavaderia guy and then napped hard. We emerged again at sunset, to sit on the patio and watch the sun go down and to have a peak at the new neighbors that quietly slipped in when weren’t paying attention. Bill and Mike came out to see the sunset and stopped to chat. Quiet evening at the Mar Rosa. 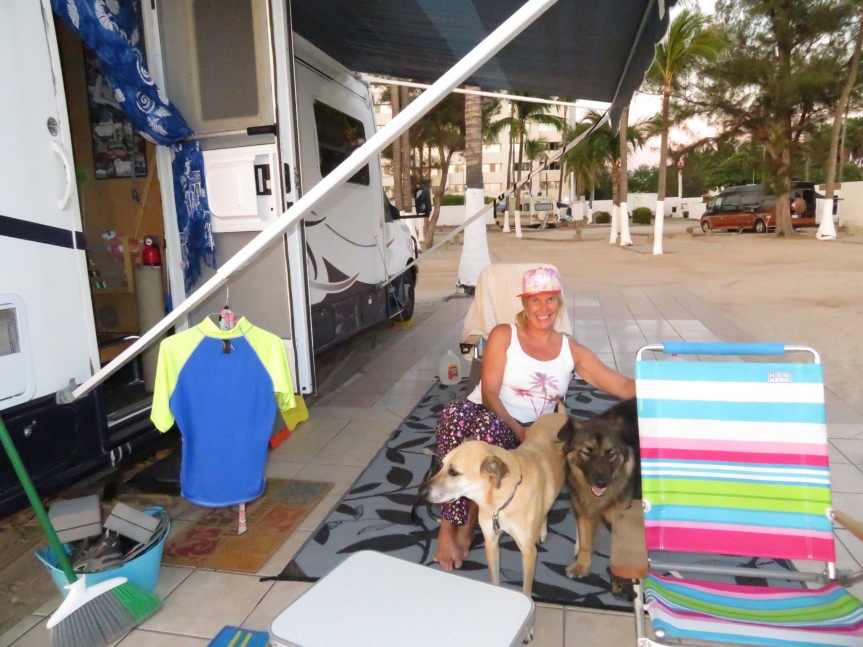 One thought on “Central Market, Mazatlan”