We slept in way late. Guess we must have needed it. I walked the dogs along the Fremont River trail and Koda waded in for a cooling dip. The wind was howling and the camp host said it was predicted to blow with gusts of up to 50 mph. The trees we were under were whipping back and forth and dropping random twigs and small branches on the roof. You could hear the gusts coming from a couple of hundred yards away. The roar of the moving treetops would start in the distance and the sound would intensify as it approached until the wind blasted the campsite. Today is much cooler than the day before. Many of the other campers had already vacated earlier in the day, so we moved Lexi over to a different site that didn’t have trees overhead. We are over by the river. An added bonus is that the solar system is now loading in double digit amps with the full sun. 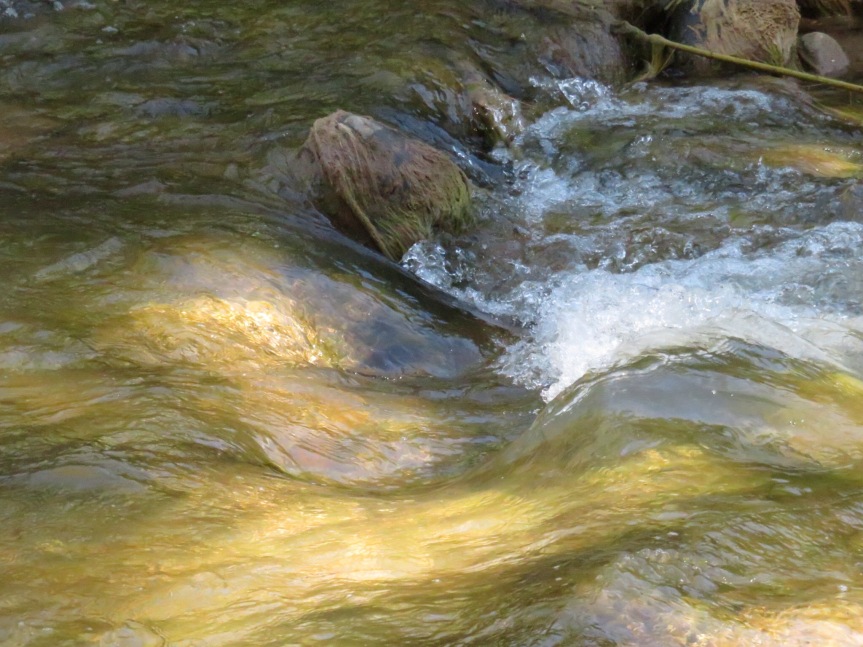 Around midday we laced up our shoes and set off on a hike. We wanted to find a trail that would take us up on the wall with a view of the valley below. The trailhead was right across the road from the campground. The first section was pretty steep then it plateaued a bit at the top. We took a secondary trail to the left and wandered around the red rocks for a while. Then we retraced our path and took the main trail to the south.

The path went up along the cliff face for a short distance then turned into a canyon that wound into the interior of the mountain. There were lots of short vertical canyons going off the sides that ended in slots too narrow to pass. 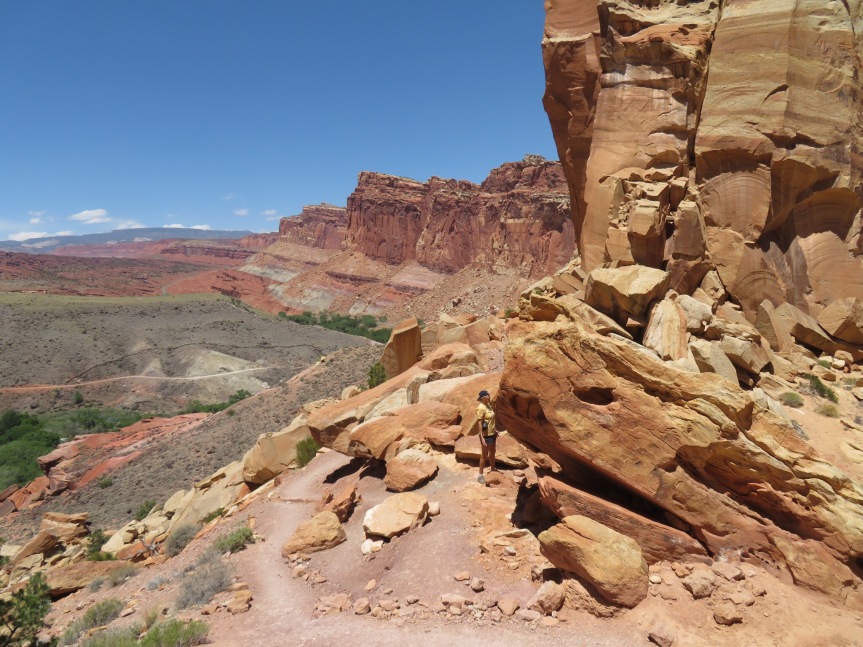 We continued on through the sandy wash until it opened up onto an area of large granite hillsides adorned with amazing formations of red rocks. During the three hours we were rambling through the desert we saw only a handful of other hikers. 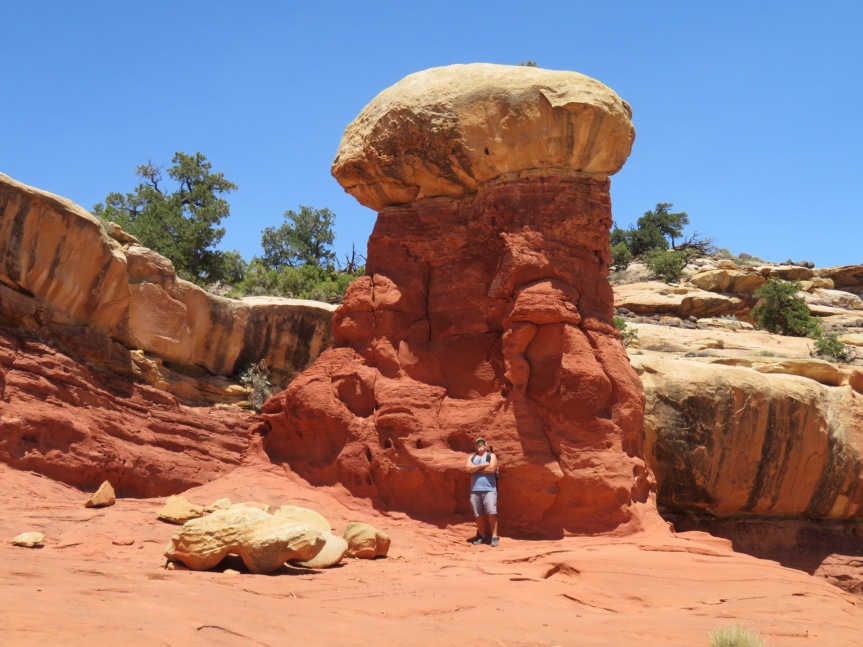 A side trail going up the steep side of the hill promised views of the canyon below. We met another hiker at the beginning of the trail with a map and the three of us hiked up together. Ira was a New Yorker who has since relocated to Colorado Springs. We chatted as much as the thin air and steep climb would allow. We took pictures for one another at the summit. The Vista was awesome and the wind was threatening to blow us off the cliff’s edge. Ira stayed to commune with the view and PJ & I started back for the camp. 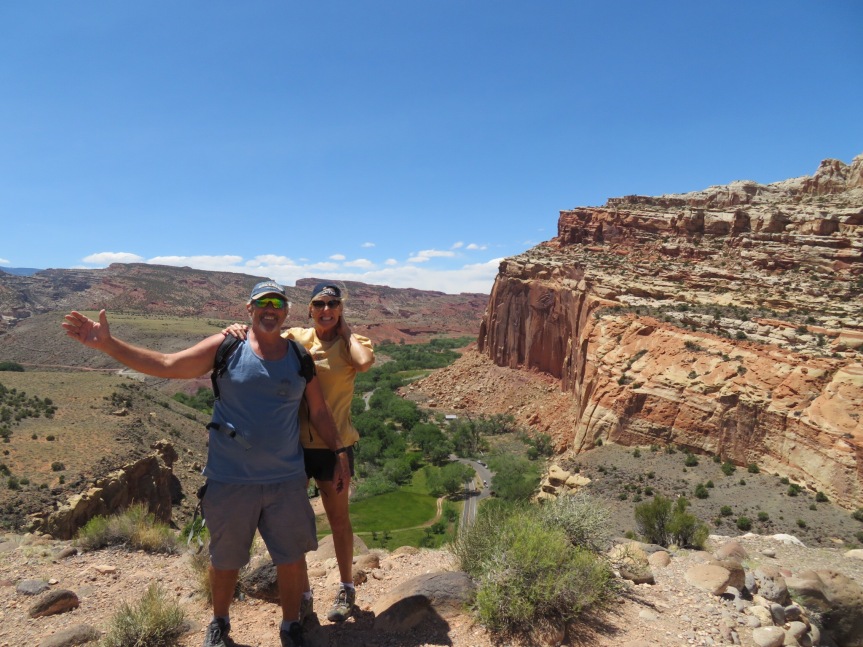 The dogs were happy to see us and we took them out for a stroll. PJ jumped in the shallow river and rinsed off. I joined her and did the same. Chilly water but good to wash away the afternoon’s exercise. That’s the one thing lacking at Capitol Reef – showers. 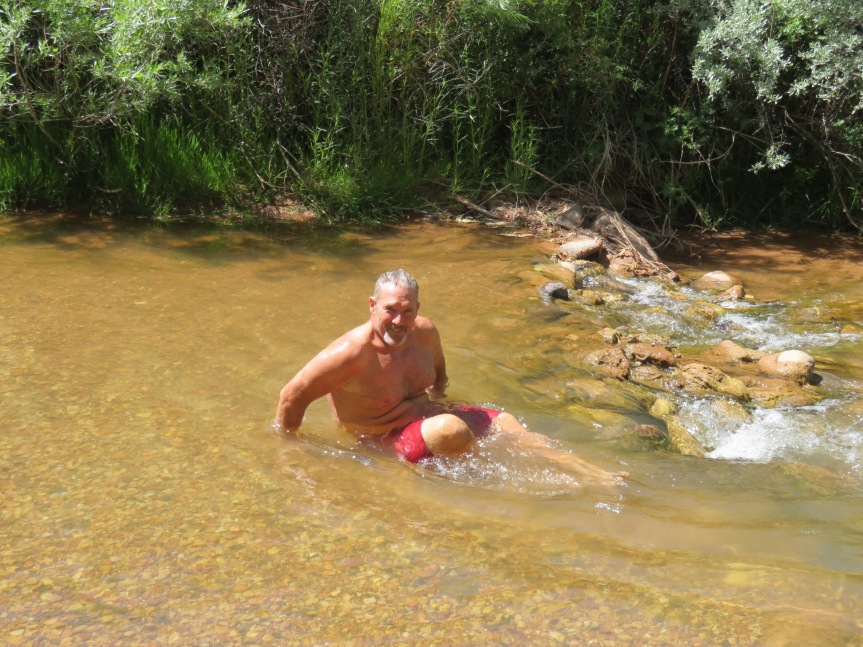 After changing, we headed down the sidewalk to the communal orchards passing deer and the ubiquitous marmots along the way. The only fruit ready to eat was cherries on the cherry trees and even those were still a little bitter. The pears were coming in and the apples were starting to form. We explored around the grove then walked a little farther to the nature center and had a look around. 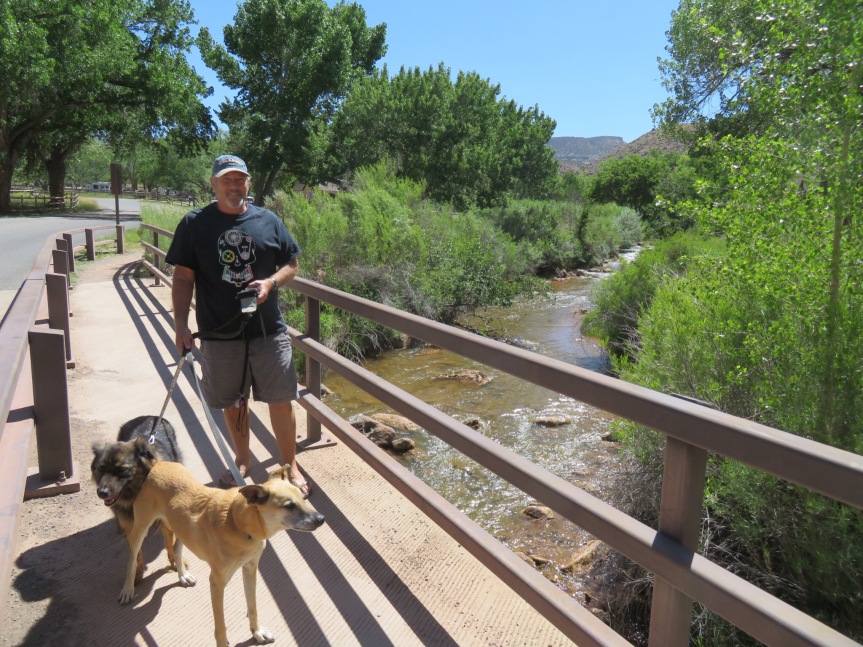 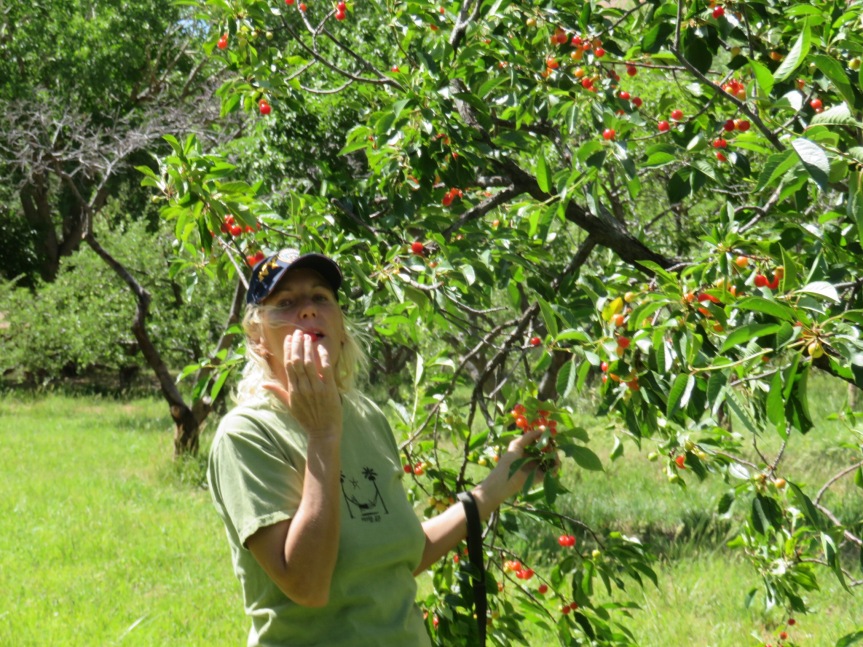 Relaxed back at camp sitting in the shade. Talked to the Boy Scout leaders across the way. Their troop is here from Salt Lake City doing a series of hikes. The Korean gentlemen in the Scamp trailer engaged me in conversation as I was returning from recycling our bottles. He is a photographer and is on a tour of some of the most beautiful nature areas, Bryce, Giant Canyon, Arches and here. He whipped out his phone and showed some of his favorite shots. 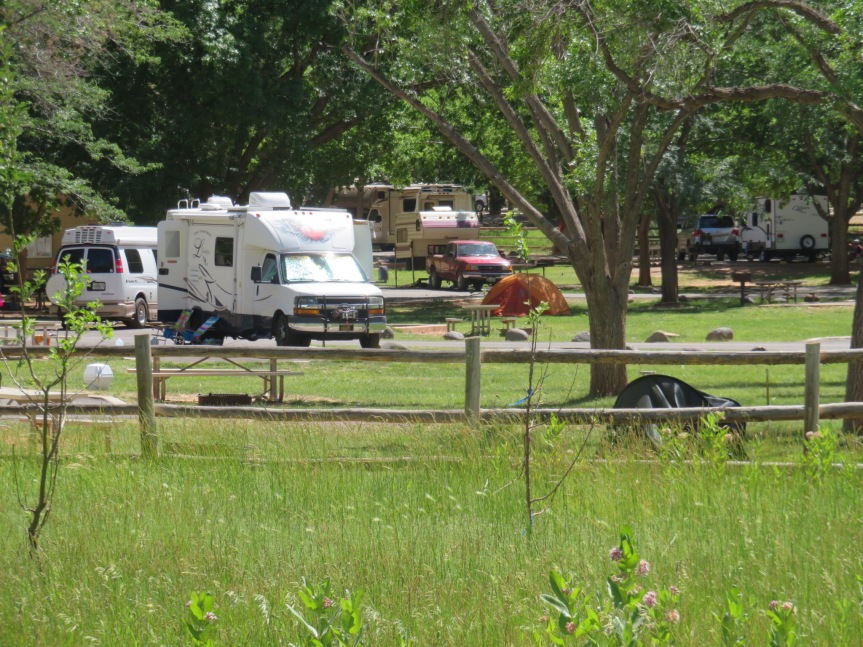 I cooked us up a couple of omelets and we sat at our picnic table dining under the watchful eye of the cottonwoods and red rocks. The air grew cold and we retired inside to read and write and rest our weary legs.