We were sleeping late at Shady Point. A group of teenagers had arrived at 3:00 am and spent about an hour putting up their tents and talking in normal voices, not loud, but enough to know someone’s there. Cali was acting funny, so PJ got up and walked her around the campsite. We both had a hard time getting back to sleep even running the fan for white noise.

The weather is fantastic, an occasional cloud to keep us cool but mostly sunny and mid-seventies. Took some back roads around southern Michigan and emerged once again on I-80 in Indiana. Long drive along the interstate, the usual: cruise control and watch everyone roll past. Ohio greeted us with more toll roads and after a couple of hours we exited at one of their visitor centers. 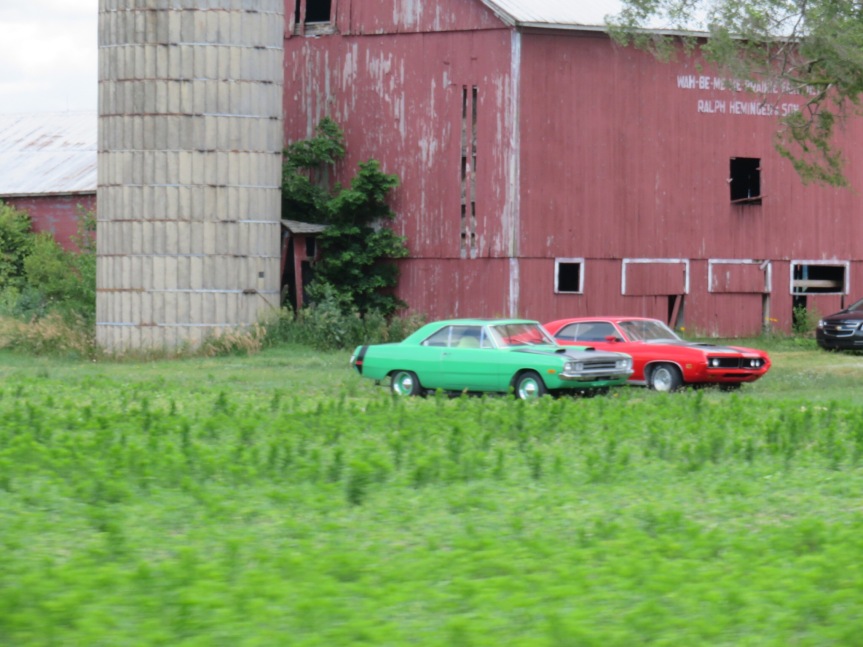 It was a surprise. We are accustomed to the normal rest area with a bathroom and maybe a couple of vending machines. Here it was more like an airport terminal with a Burger King, a Sbarro’s and a Starbucks. They had ATMs, phones, video games and a massive dining hall with tables inside and outside. There were probably 75 people in there milling about. We parked over in the RV area that had about twenty parking spaces with hook-ups and a self pay kiosk for $20 overnight for those who are caught out on the highway with no place to park up.

I bought us hero sandwiches at Sbarro’s. At first, they had a hard time comprehending that I wanted no meat on PJ’s sandwich. The kid called his manager and she got creative and made her a hot hero with mushrooms, spinach and cheese. PJ was waiting with the dogs in the parking lot, so we sat at a picnic table and ate a leisurely lunch. Excellent sandwiches and a quiet spot next to a cornfield. 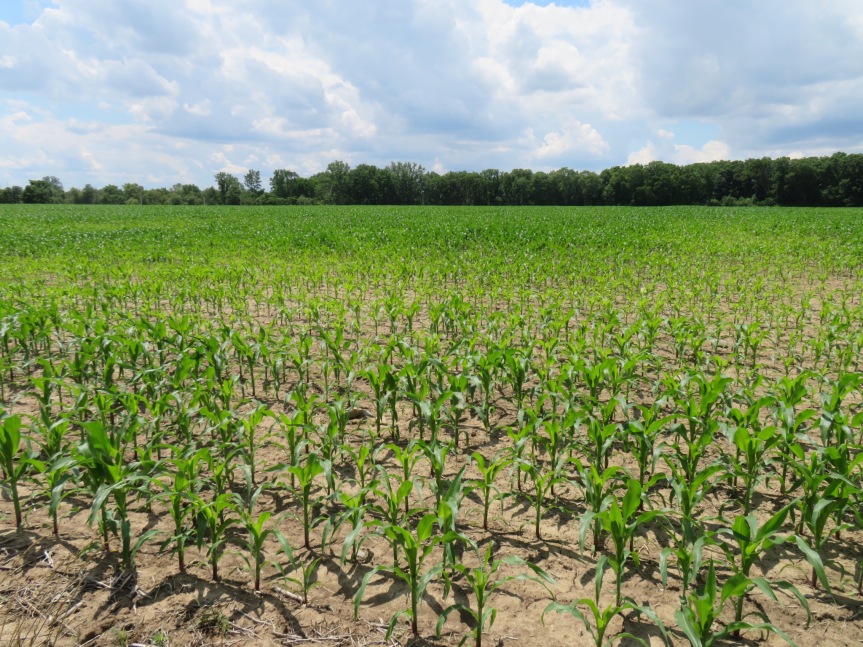 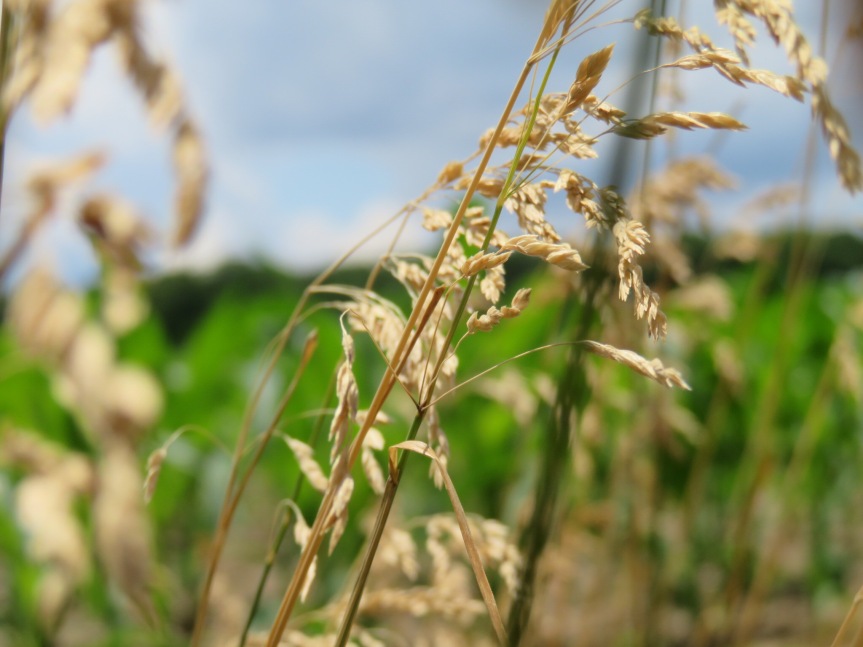 PJ found a state park over on the shores of Lake Erie, so we plugged that into our navigation. She gave them a call and they only had one space left. The girl told her she would save it even though she shouldn’t. The GPS took us on some convoluted route through a distressed area of downtown Toledo. Another city that has long surpassed its glory days. Once nice houses with big front porches falling into disrepair. The area kind of looked like Walt Kowalski’s place in Gran Torino. I kept expecting Clint Eastwood to step out and tell me to get off his lawn. 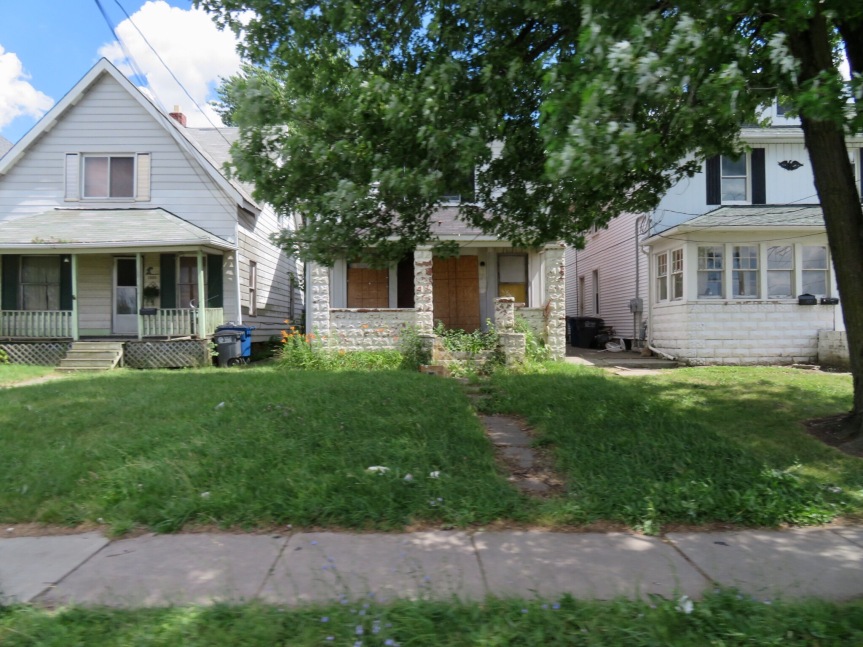 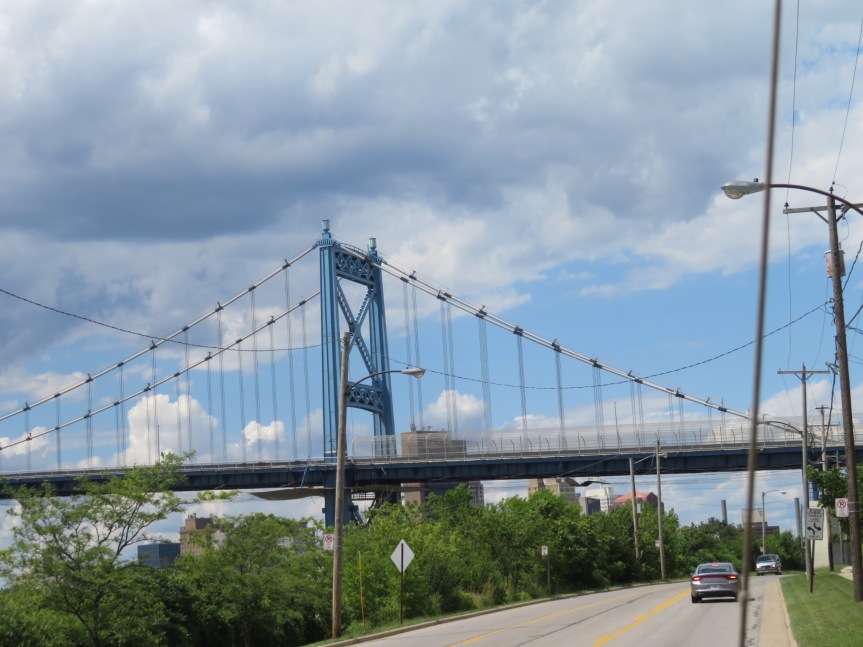 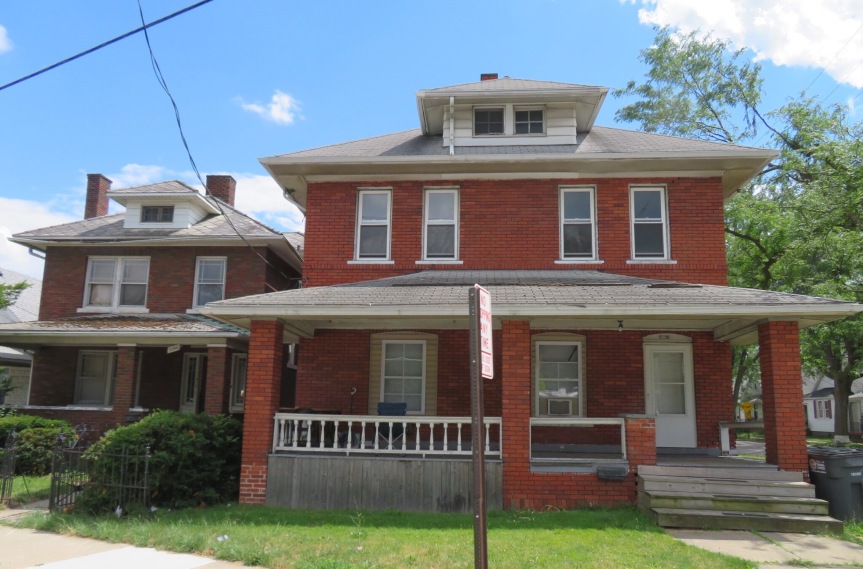 We continued through some nicer neighborhoods with signs limiting vehicles to 6000 lbs. I pretended not to see them because I’m not turning around and going back the way I came. We’re at about 12,500 lbs. fully loaded. Pretty soon we arrived at a huge park on the shores of Lake Erie with our campground off to one side. We located the office, got checked in and drove to our site. As we pulled up, we noticed the camp across the street with about 12 guys hanging out in it. 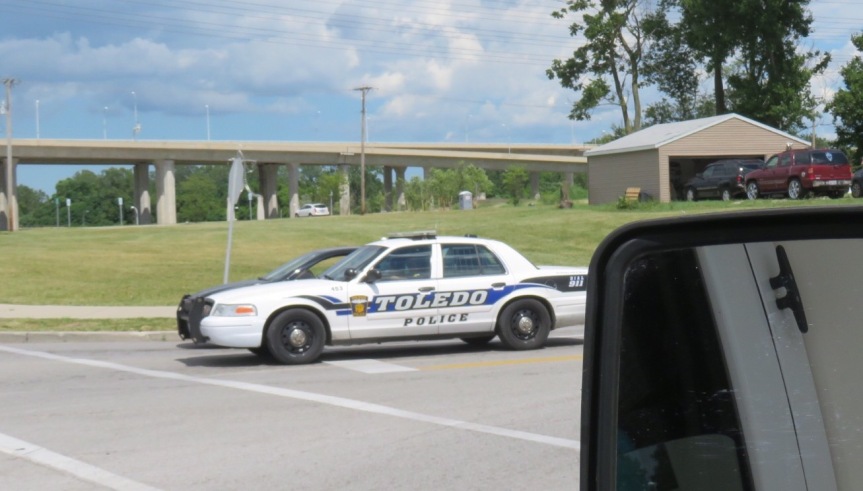 We set up camp while they commenced to lighting off fire crackers. I guess Ohio state parks reckon it’s okay. Oddly enough, Cali isn’t getting too freaked. They only allow smaller fireworks like black cat style which aren’t overly loud. We considered moving on, but we are too tired to pack back up and since the dogs seem okay so far we might be alright. We put on the fan and rested for an hour or so. 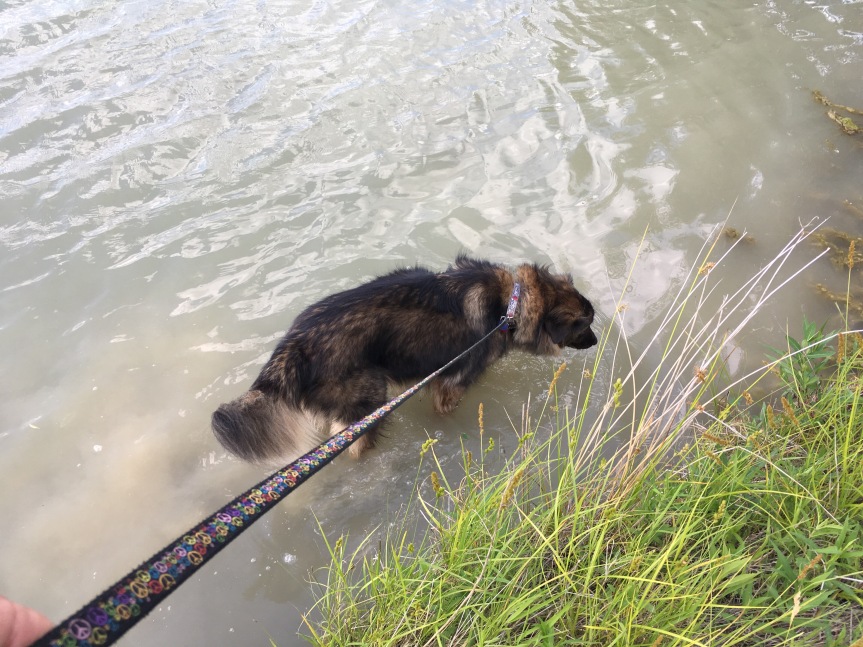 I walked Koda around the pond they have within the campground. Of course, she had to jump in and drink some of the funky water. I let her have a small dip, but sometimes I get nervous when she’s always wanting to drink from some of these questionable bodies of water. We returned to camp,and roused PJ to ride bikes down to the Great Lake and see what all the fuss is about. 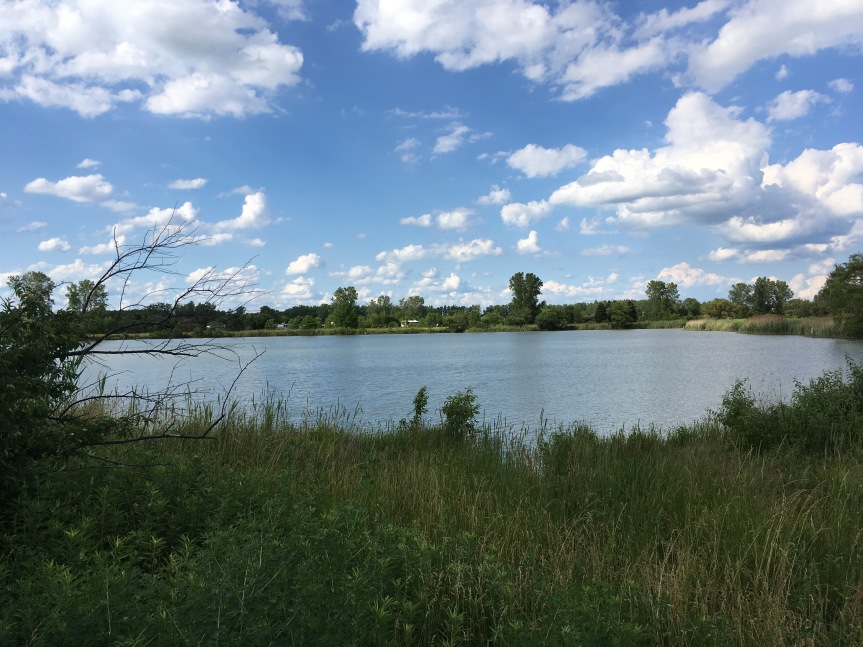 The campground and beach park have a large network of bike paths that run through the forested areas of the facility. We rode past the fishing pond and turned down a tree lined path that led down to the lake. We took a few photos, then paralleled the shoreline and rode down to the public beach. Lots of picnickers and day visitors. A few guys were taking advantage of the wind and kite surfing and wind surfing on the choppy waters. 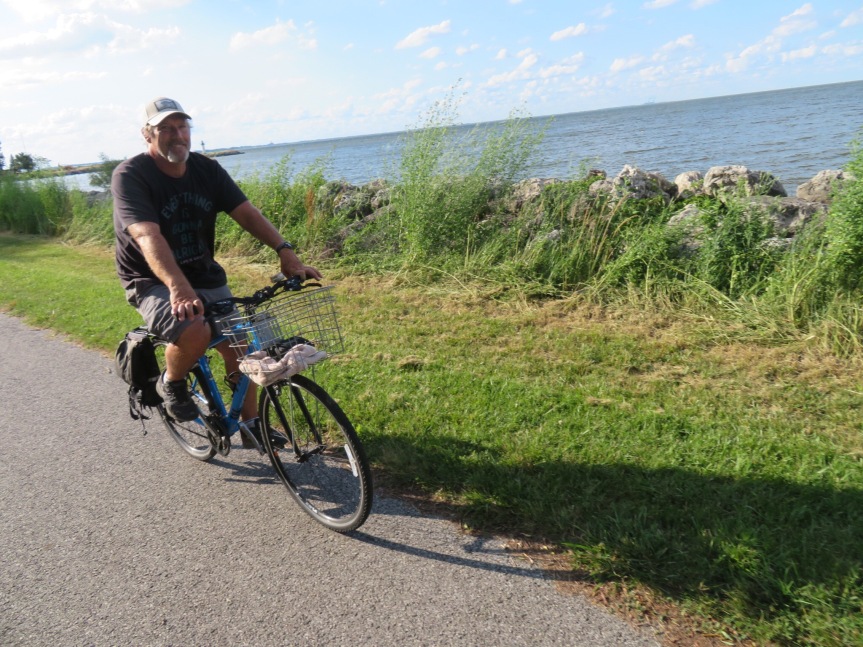 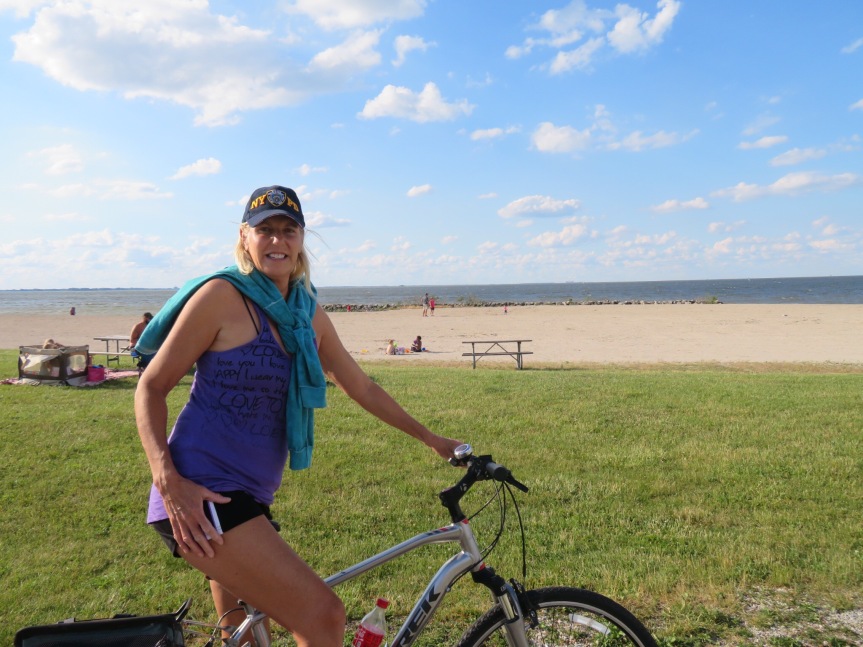 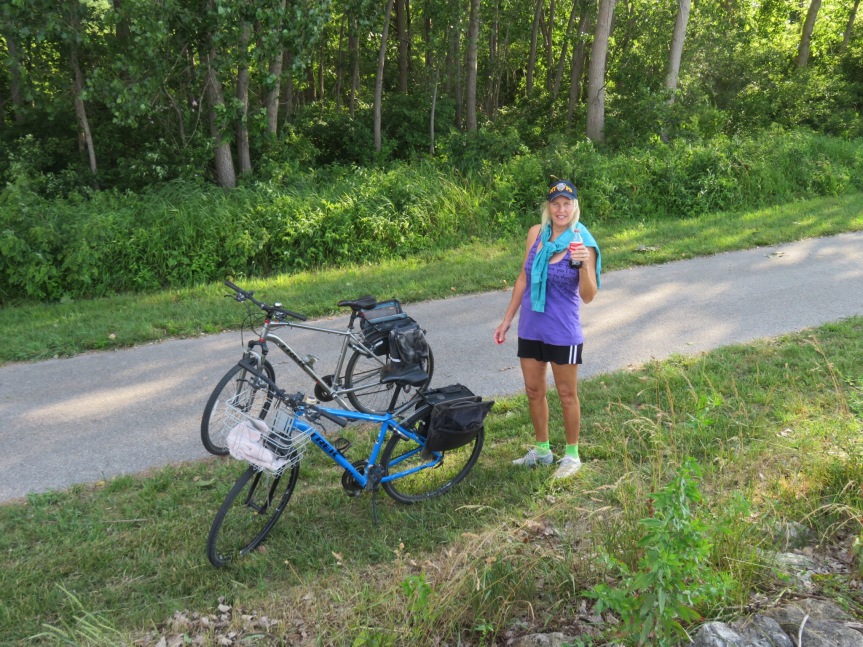 We rode a couple miles of trails, down past the golf course and back around the fishing lake by the public park. People have weddings and other events in the large green spaces here. Some kids were feeding the seagulls and some others were getting arrested for we’re not sure what. We pedaled past them and rode hard into the driving wind passing bikers coming the other way. It was time to return to our camp where the dogs were ready to go for a walk around the grounds. 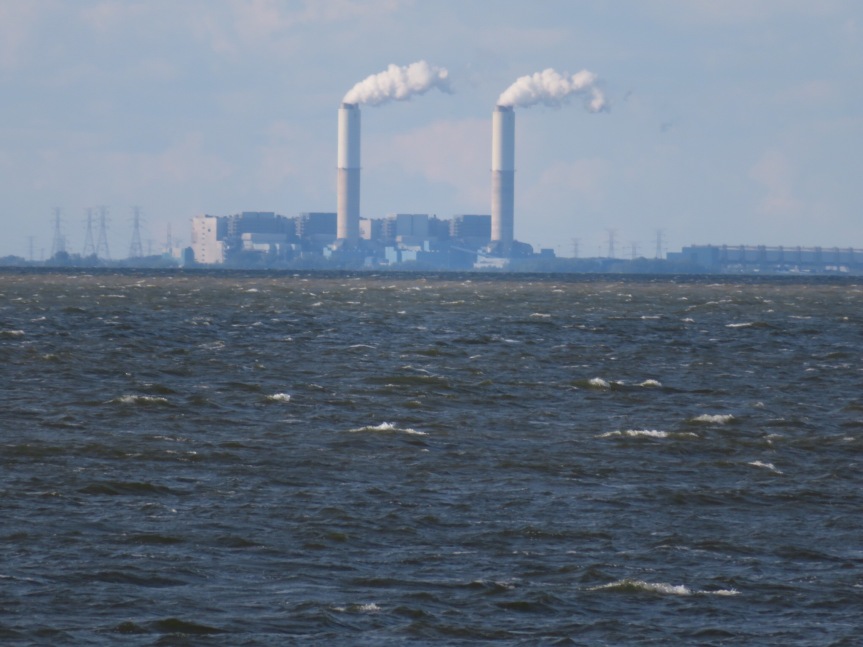 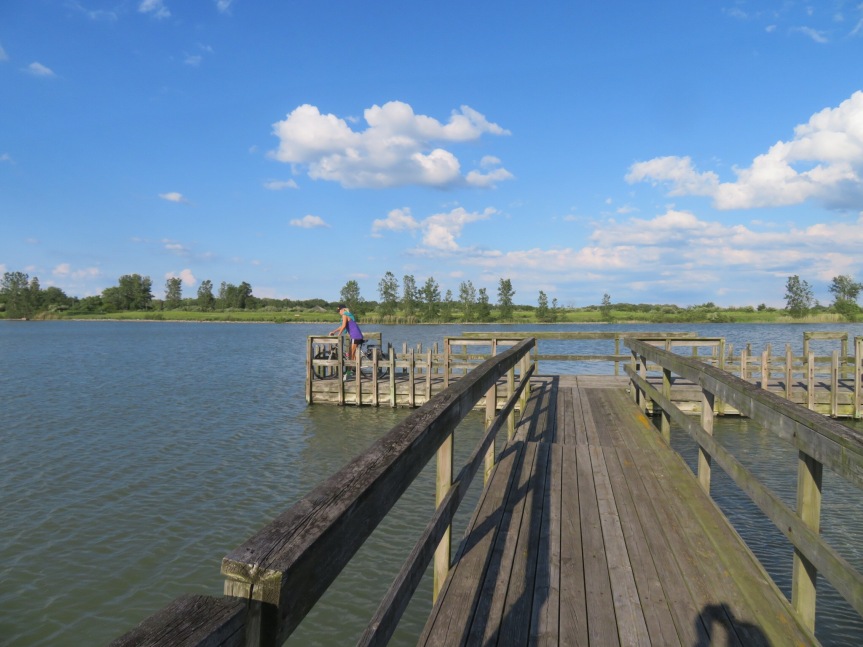 Cooked up some dinner and did some writing and searching online for the next stop. We’ll let you know where we end up tomorrow. 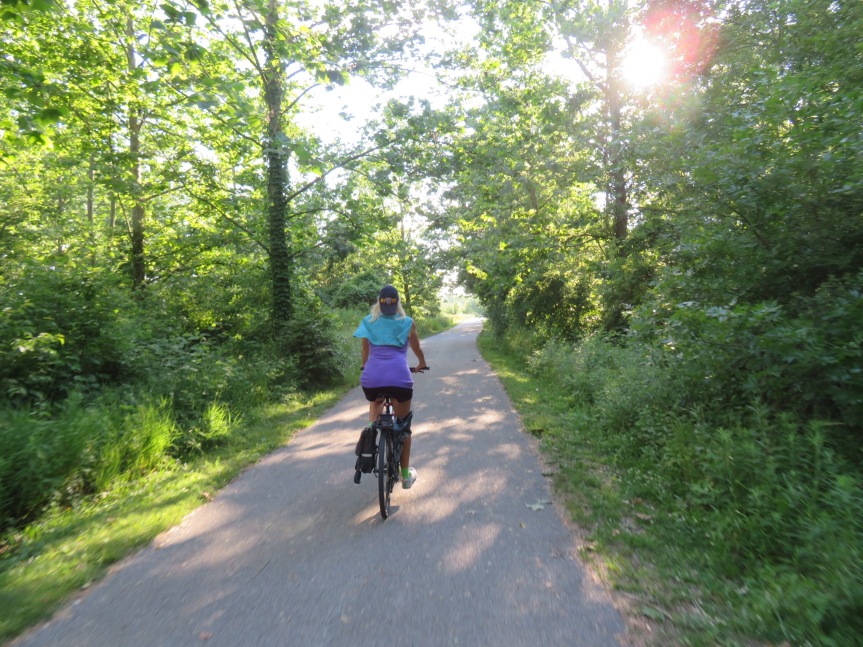