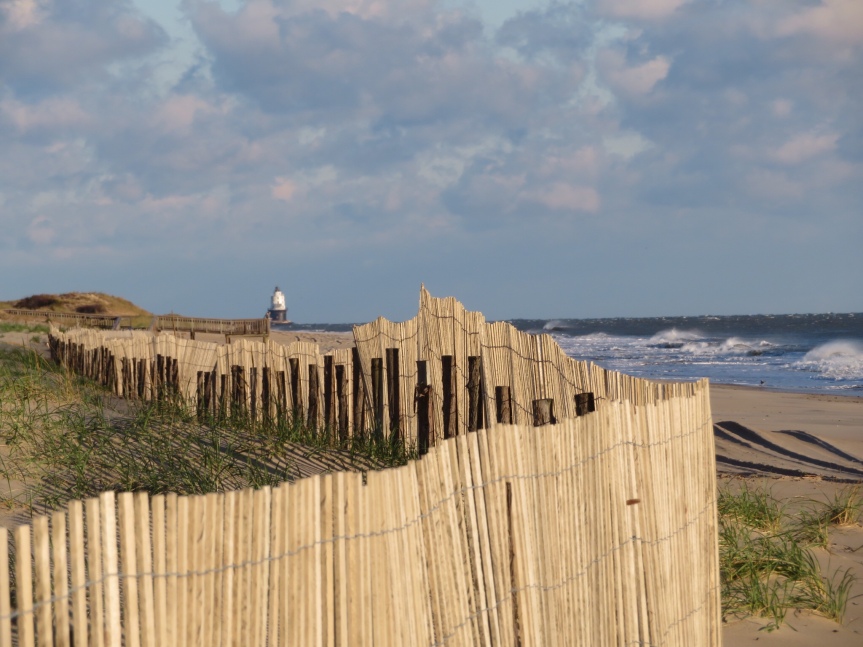 Cali and I were up early and slid out the door quietly to let PJ catch up on her sleep. We hiked north out the back end of the campground towards the point at Cape Henlopen. The sun had made an appearance this morning but the wind kept things crisp. We came upon Fort Miles, an old installation from World War II days. The signs said closed for remodeling, but we saw an intrepid jogger coming out so we ventured in. It was early on a chilly winter day and there was no one else stirring. Rows of old barracks and stands of old artillery were the attraction here. There are several tall spotting towers throughout the state park where soldiers used to watch for encroaching enemy boats. The federal government donated the base to the state of Delaware in the sixties and that is the land we are camping on, Cape Henlopen State Park. 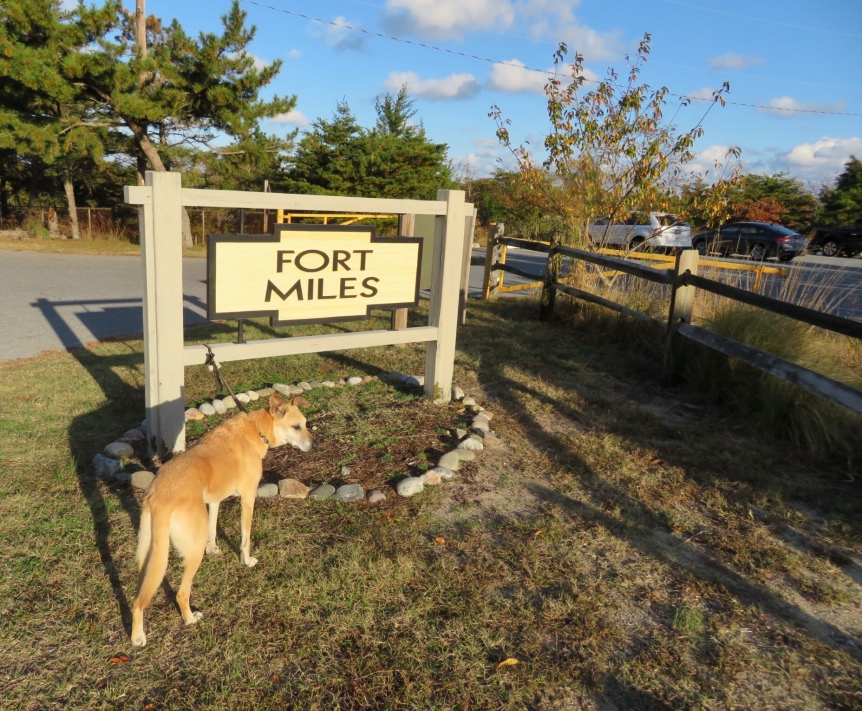 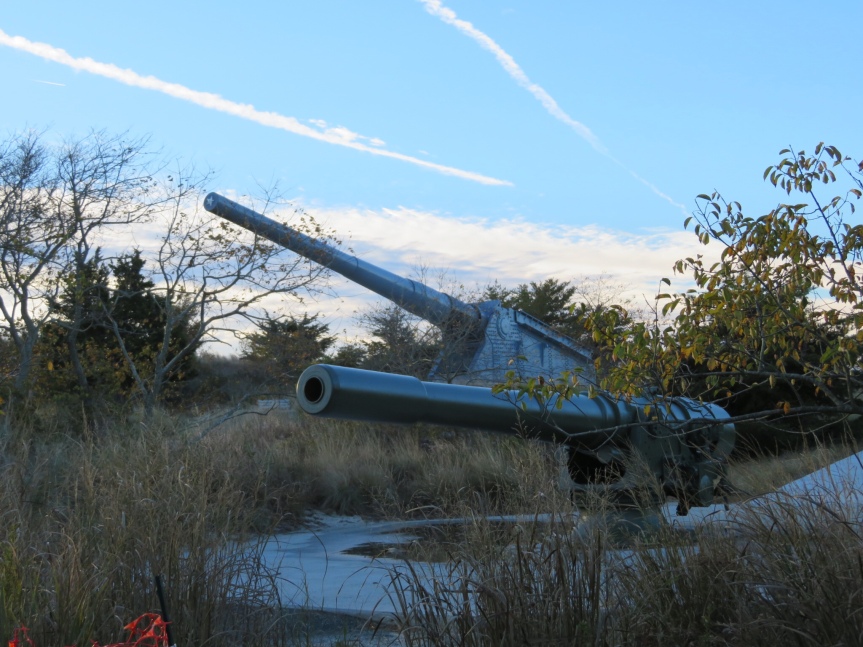 A small trail led along the dunes on the far side of the barracks, so we wandered through the trees for a ways until we came upon a beach access point. We crested a small dune and were greeted by the Atlantic Ocean. We explored around the area for a while then figured we had better get back before PJ started to worry about us. We stopped by the entrance kiosk to see about signing on for another day, but the ranger said all the sites were booked. He was going to check with his supervisor about opening an area that had already been shuttered and told us to give him a half hour then come back.

PJ was doing yoga when we returned. We talked about hanging around for a few days while having some cereal. When we went back to the entry station, they hooked us up with a campsite in row B. We are the only campers in the entire row except for a van at the middle near the store. Row C is closed because of the Christmas light displays so we have no neighbors. Just the way we like it. Hats off to Tiffany and Don for setting us up. 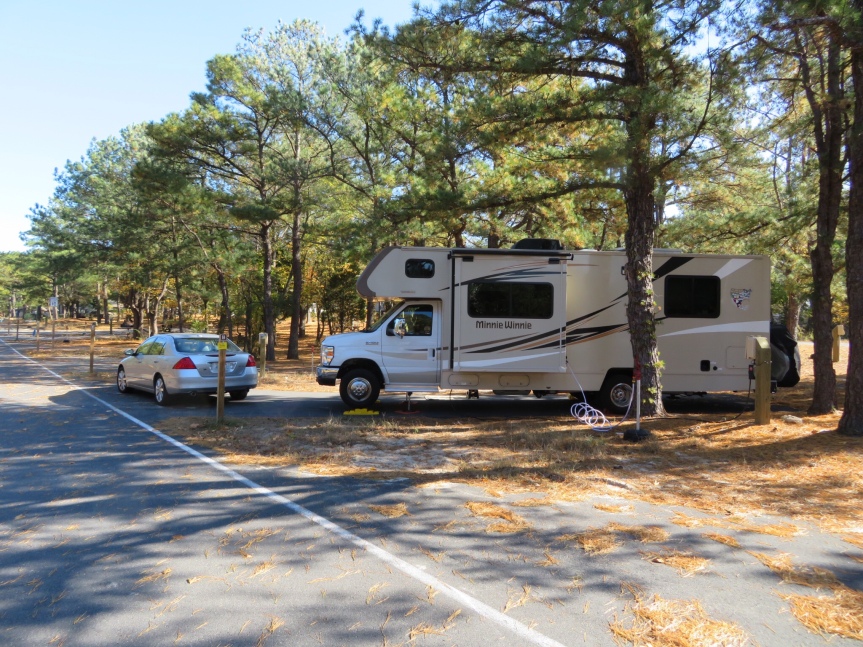 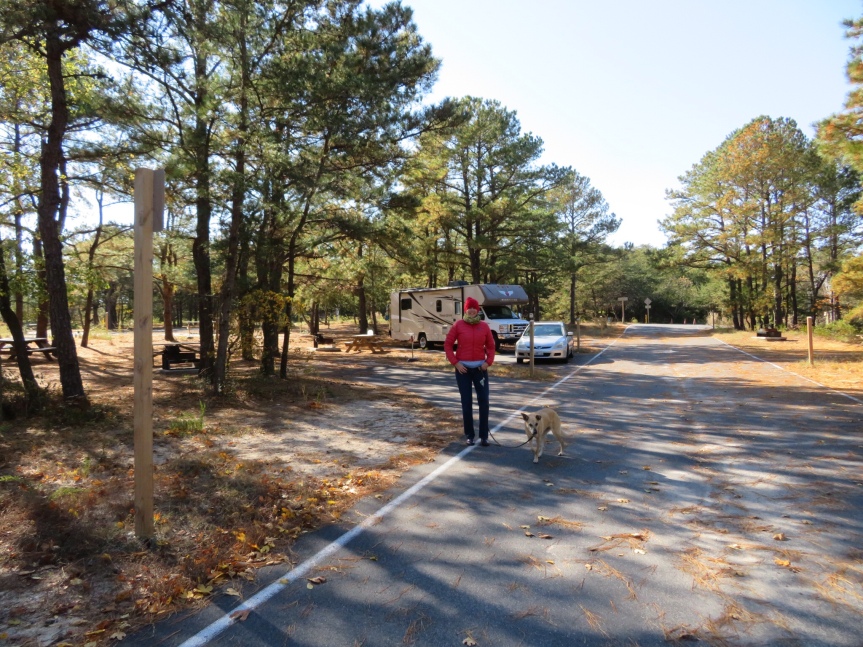 After our new camp was set up and in order, we decided to head over to the nature center and give it a perusal. There were a few touch tanks with some rays and horseshoe crabs that you could pet and a row of aquariums with some local sea life. We tried to dodge the loudest of the unruly kids and have a look around. I felt sorry for the crabs and rays getting poked and prodded all day long although I caught PJ giving a ray a pet.

In the meadow across the street, a herd of deer were happily hanging out munching on the grass and enjoying the sunny afternoon. The wind had picked up and was howling and cold. The temp was near 50 but the wind chill must have cut that by at least 10 degrees.

Outside the nature center there was a small trailhead going down to the bay side of the cape. We zipped up our jackets and trudged across the sandy expanse of scraggly pines and low shrubs until we came out at the windswept shores of Delaware Bay. Hard onshore winds held the seagulls suspended in flight and we had to lean in to keep from being bowled over. The lighthouse stood mournfully alone at the end of the long jetty. A few gulls were fighting over a small fish while others munched on the carcasses of stranded horseshoe crabs. 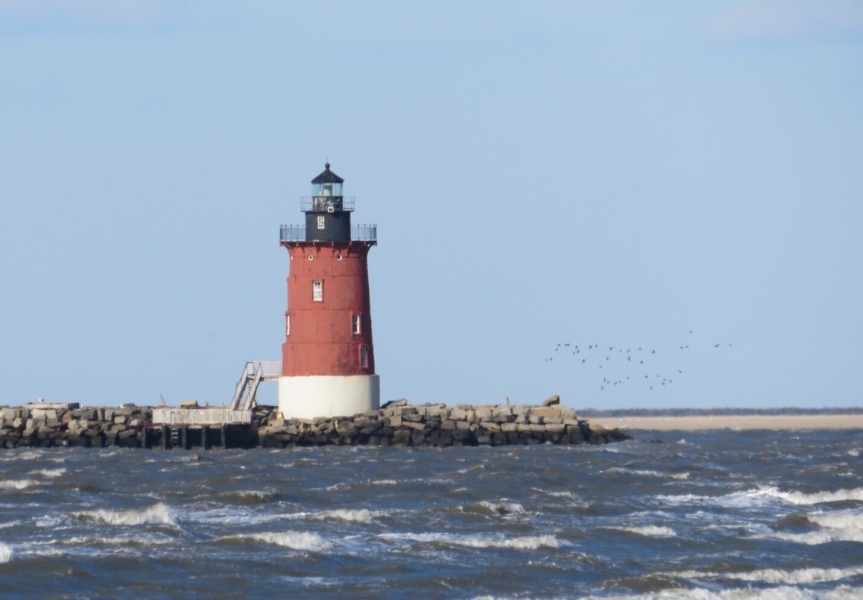 There was a long fishing pier jutting out into the bay that was inviting us to have a visit. It had a low chain link fence on both sides to encourage people to enter at the bait shack. There was no one around today, so we hopped the fence and strolled out onto the dock. We were having fun with the wind, jumping as high as we could to see if it would blow us down the planks and hiding our faces to keep from freezing. We walked back out to the road through the pier concession area and took the bike path to get back to the nature center.

From there, we drove down to the swimming beach at the north end of the cape and walked down on the boardwalk to the sand. A few hearty souls were out enjoying the day. A family with a couple of young kids was playing around in the sand like it was a regular summer day. A girl with the reddest nose I’ve yet to see walked past quickly with her boyfriend hoping to find some warmth in the safety of the car to thaw herself out. We didn’t tarry long, PJ was starting to get chilled and Cali was at home waiting for us.

We had a peaceful late afternoon napping and writing. PJ has a conference call with some of her girlfriends from California tonight and she was doing homework for their spiritual meeting. I played with some photos and inadvertently found myself catching a few zzz’s. After the sun disappeared, I cooked us up a couple of my world famous omelets and we cranked the heater as we ate supper. We’re disappointed that they haven’t got their Christmas lights going tonight. Maybe too much wind. We’ll hang here a few more days and see what happens. 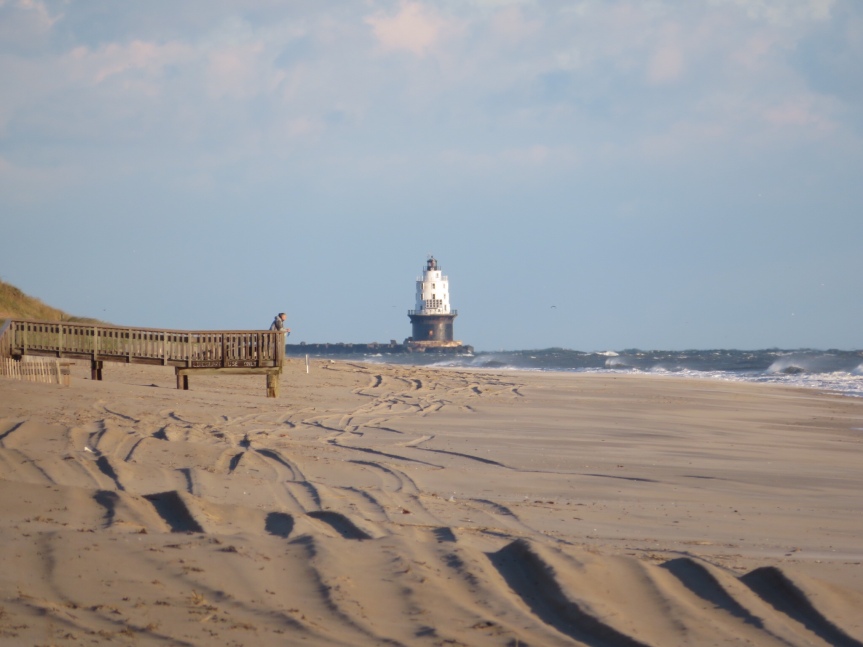 7 thoughts on “Winds a Blowin’ in Delaware”