It was recommended that we rise early to drive the Wildlife Loop so we did our best to do just that. I say did our best because it was 7:30 by the time we got rolling. Some deer were grazing as we entered the loop but not much else. We drove along for a while not spotting much of anything but a few piles of buffalo dung and an antelope way off in the distance. They had held the annual round up of the bison herd a week before and auctioned off a portion to maintain a sustainable number. We were wondering if the rest had gone into hiding when we crested a rise and there was the herd. 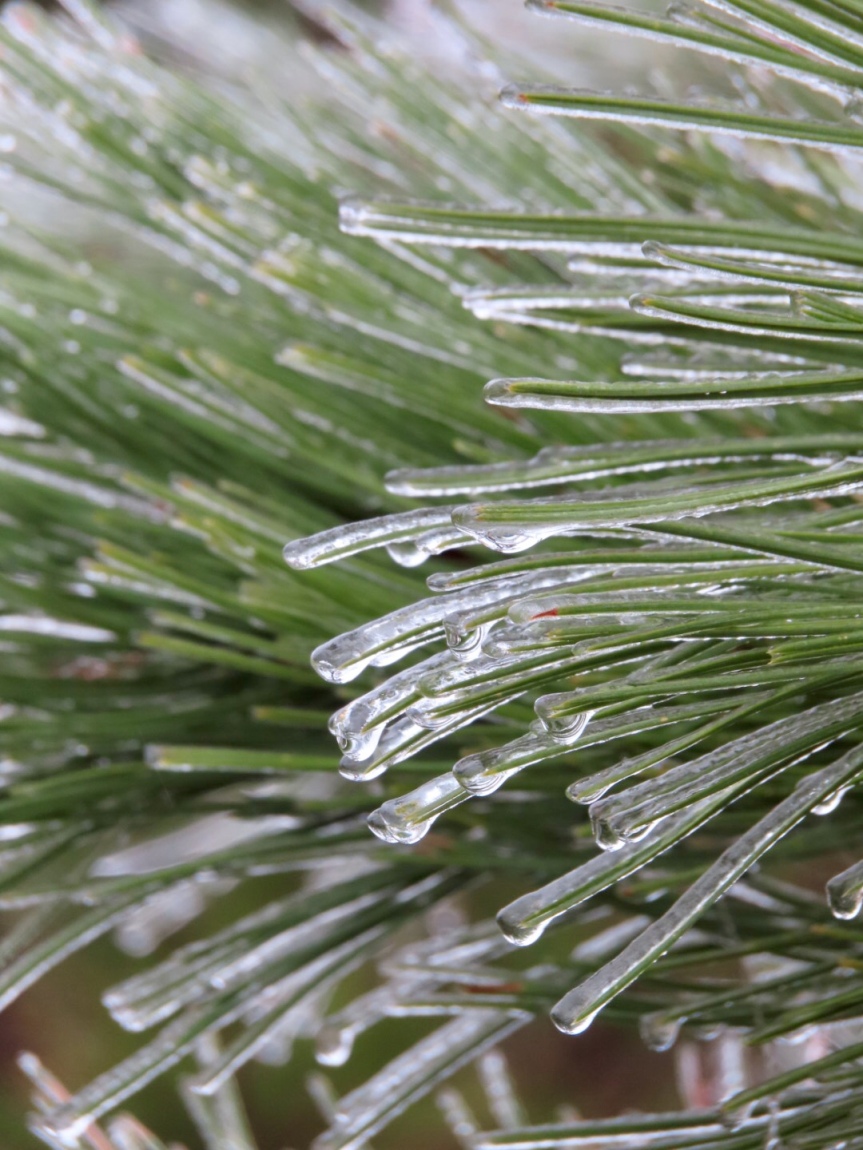 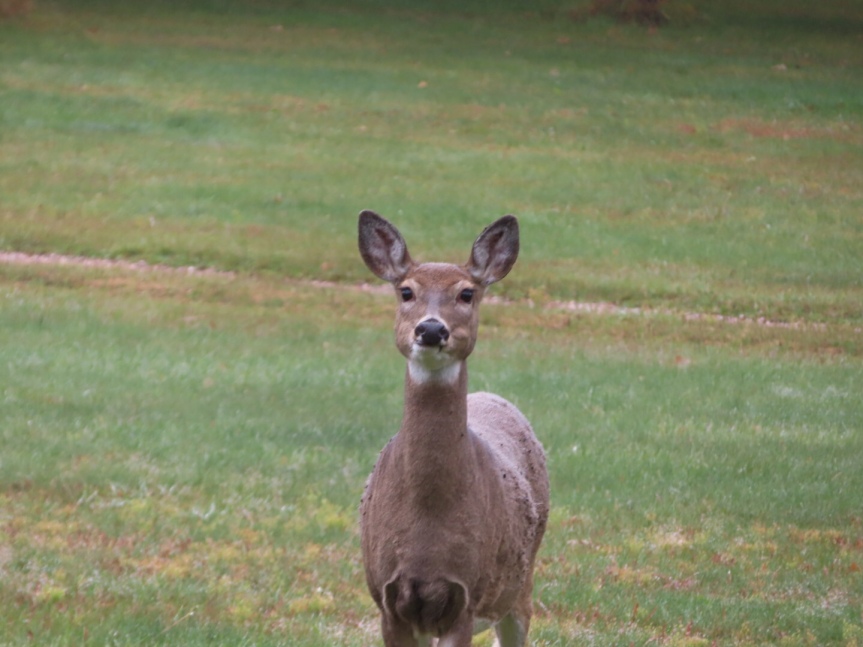 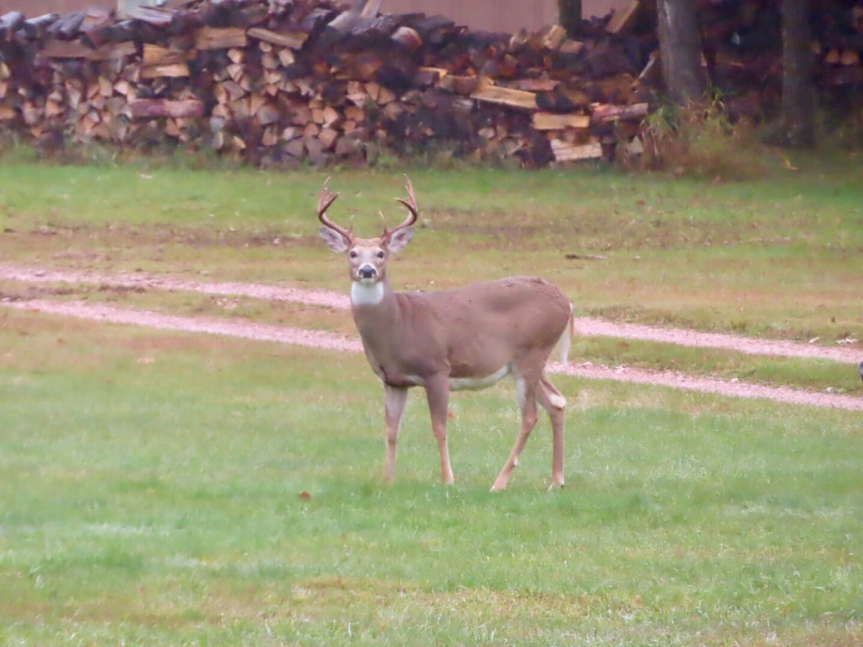 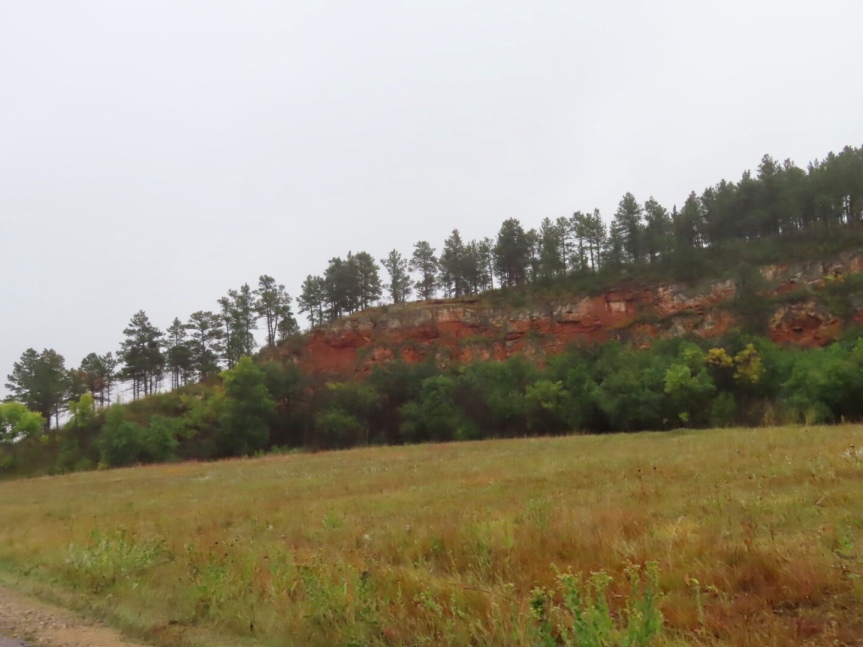 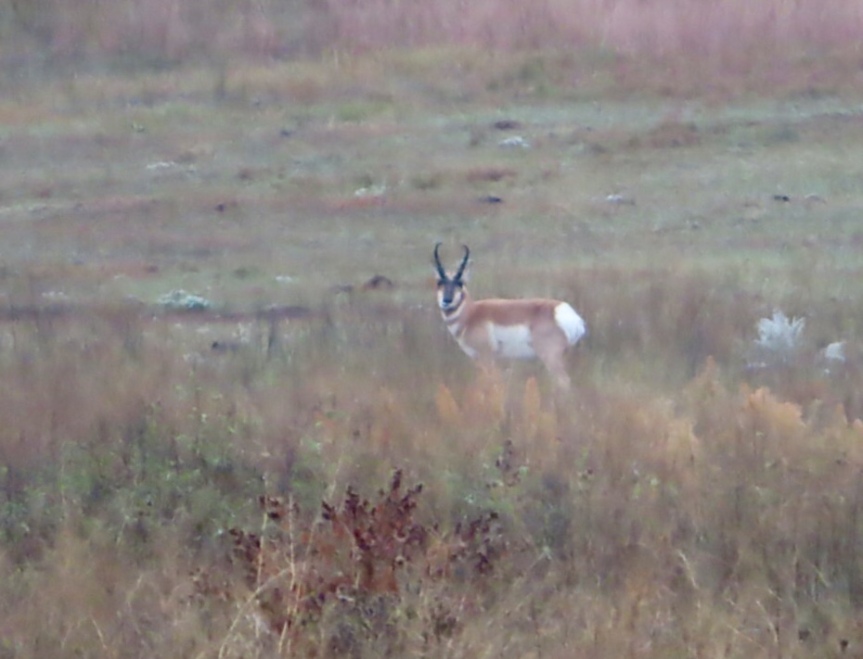 Not the best shot but he was way out there

There hundreds of the milling beasts with more streaming over the far hill in a line up like so many giant ants. They are awesome creatures, the largest land mammals of the United States. There were some powerful established bulls and some young up and comers getting ready to challenge for their spot in the pecking order. A curious calf started wandering towards us when his mother came and moved him back into the herd. 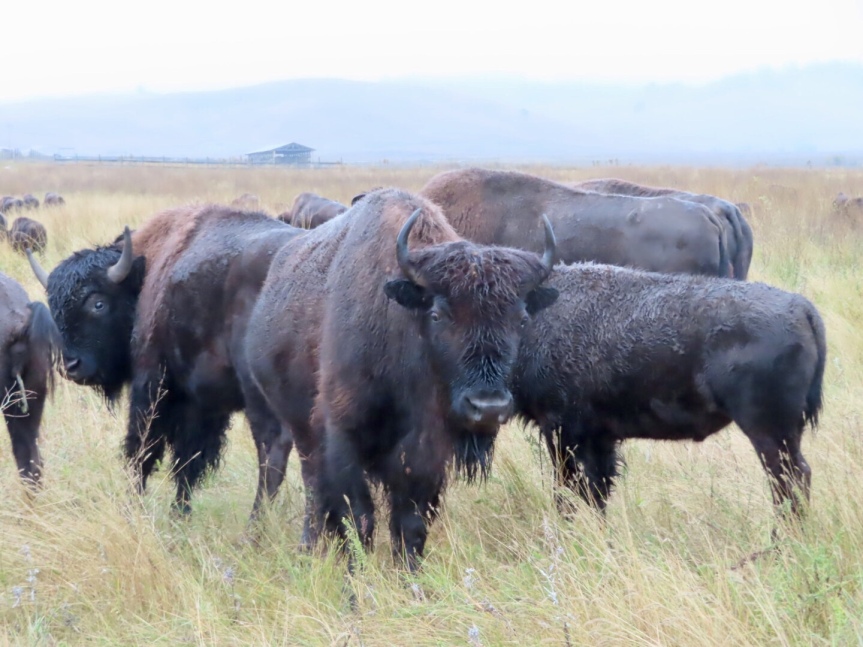 We stuck with the herd for a while watching the different interactions and enjoying the spectacle of so many beasts moving along as a group. We headed back to the RV hoping for a break in the weather before heading over to Mount Rushmore. A large family of mountain sheep were cruising the campground unimpressed by the collection of humans that were parked up in their habitat. We rested until two o’clock then drove over to Keystone to check out the carvings on the side of Mount Rushmore.

We passed through Custer as the tourist train was loading up its passengers. The main street was lined with restaurants and tourist traps, many of which were already shuttered up for the winter. A short ways up the road we came to the entry for Mount Rushmore and paid our parking fee. The girl at the gate assured us that our fare was good for multiple entries in case the fog and mist obscured the view too much. 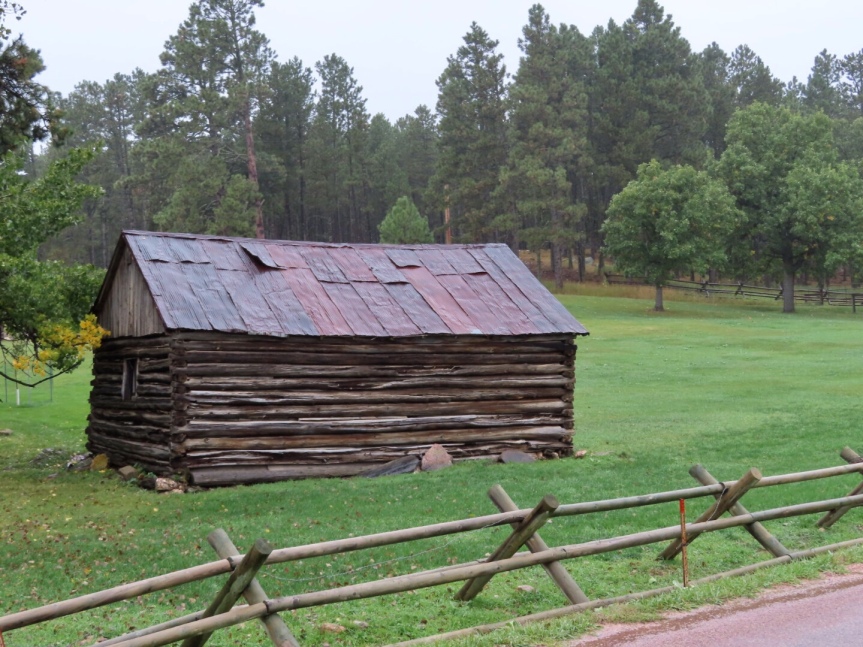 It was a good thing too. When we walked up the large walkway to get a view of the sculptures, there was nothing to see but a wall of gray shielding the granite of the black hills from being seen. We had a laugh and wandered around inside the gift shop for a while before moving down the road to the Crazy Horse monument and museum. Tomorrow’s forecast calls for sunny and clear skies so we’ll give a second chance in the morning. 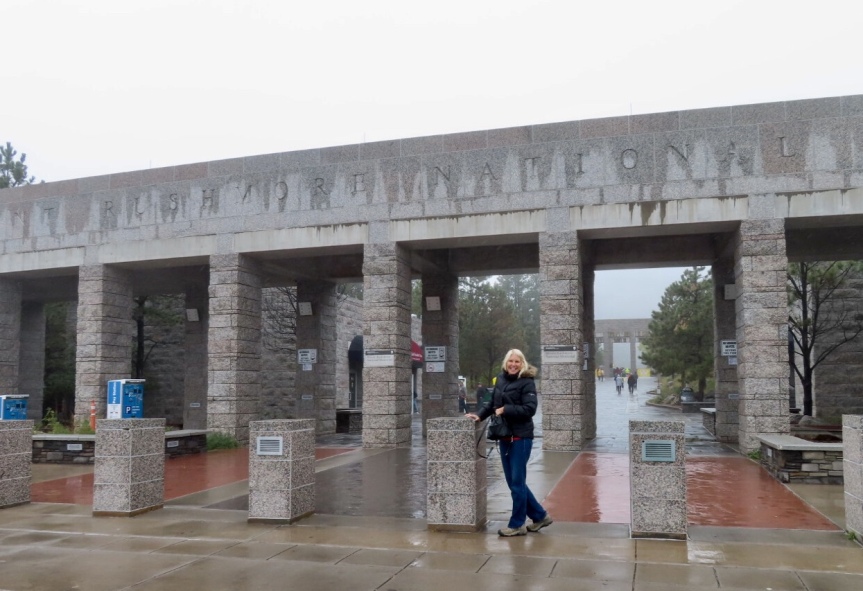 The fog had cleared by the time we reached the Crazy Horse compound and we had a clear view of the carving in progress on the mountainside where they were working on the representation of Indian Chief riding horseback. Only the face is done but work continues daily to slowly bring the figure to life from the granite stone. The museum was the best we’ve visited on the trip and held even my limited attention span for over an hour. We watched a video in the theater and then perused the exhibits and admired the artwork. 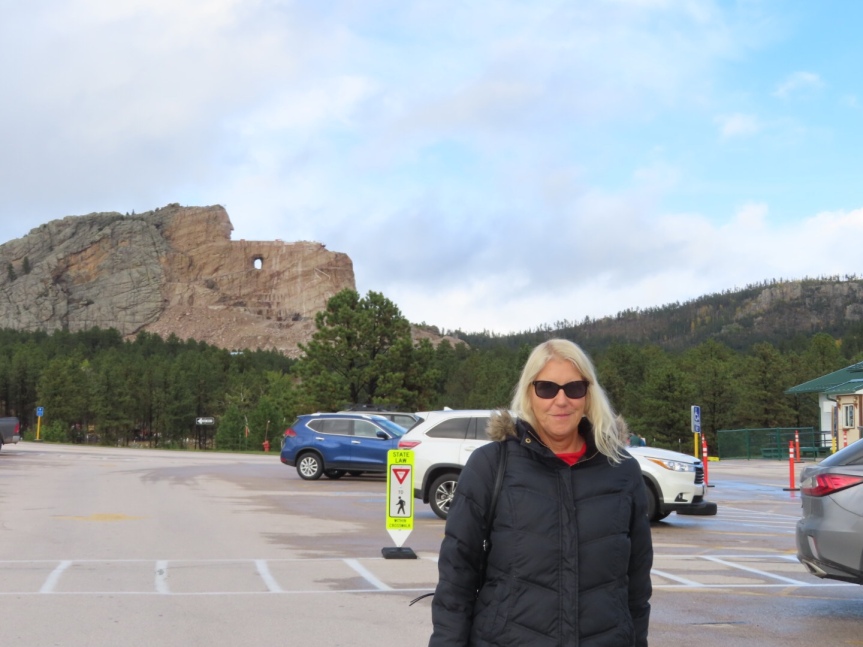 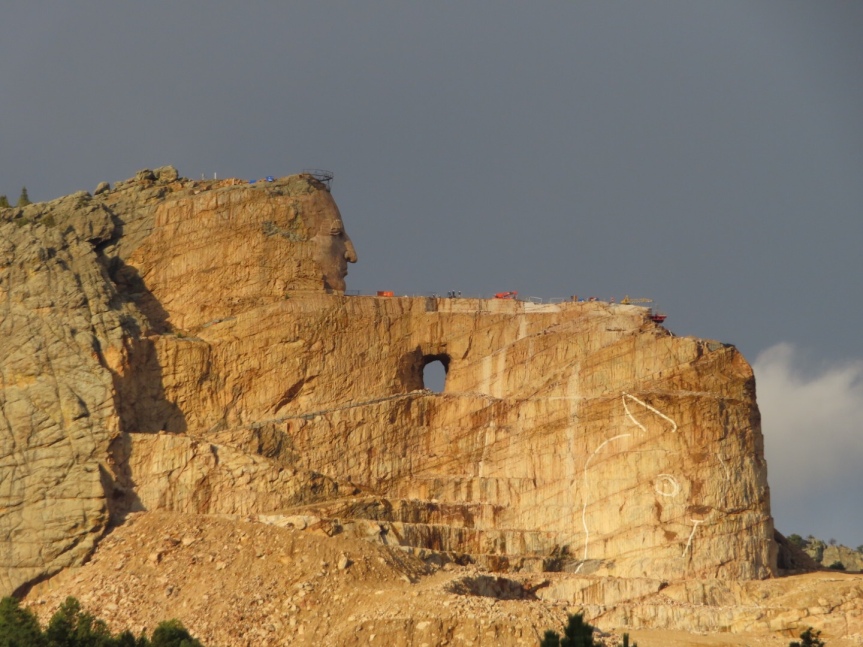 On the drive home, we stopped at Sylvan Lake, a beautiful mountain tarn set in a ring of granite boulders. The drizzle was turning to a mix of rain and snow while we were hiking around. Definitely a place to come back to and see on a day with better weather. At least we cracked the forty degree mark today. I think we topped out at 43. We made our way home through the sloppy rain and spent the evening keeping warm with Cali. 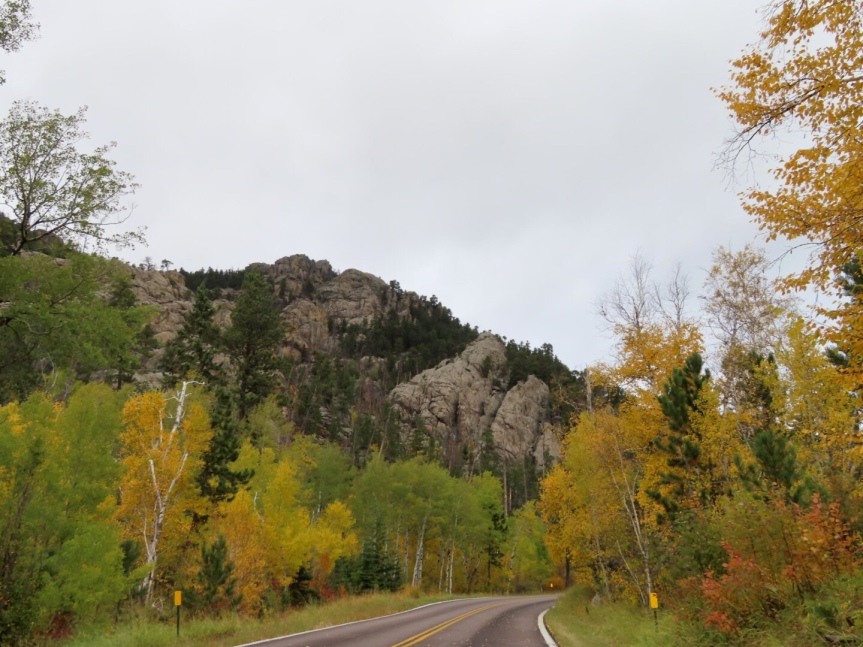 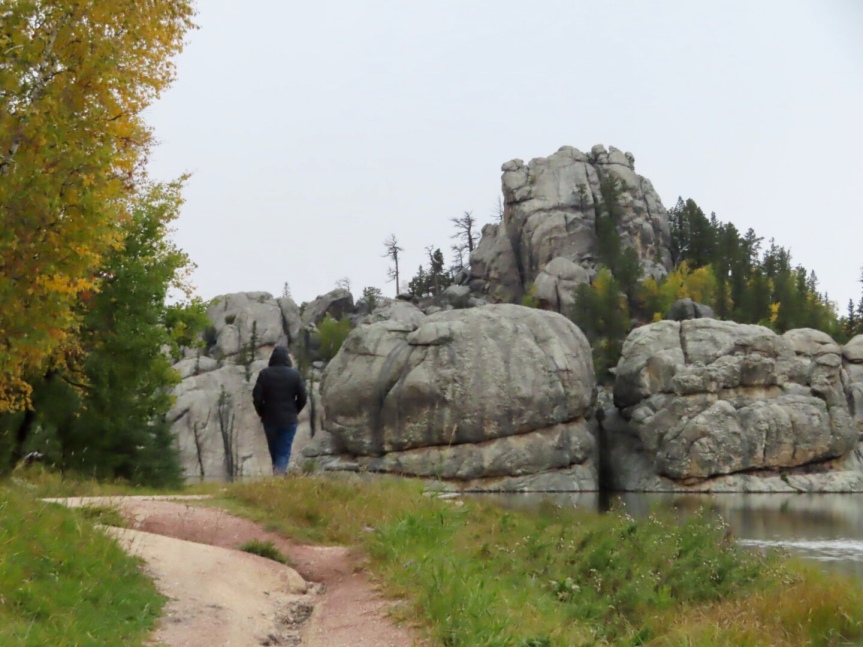 One thought on “Crazy Horse”