We wanted to beat the morning hordes marching for Manuel Antonio, so we were up early and at the gate at opening time. They only create tickets electronically, so if you didn’t go online ahead of time, they have computer kiosks like you see at airports for checking in. The only drawback here, the computers were down so everybody who had purchased online went walking past while we tried to get on the phone and get tickets. It was a complete cluster f@#% with some entitled gringos getting borderline hostile. I sat at a bench and tried purchasing tickets online. I finally navigated their cumbersome website and got our passes which they sent to my email account. I tried logging in on the phone but I had two factor authentication set up and it sent a text to my California number. Of course, I have a Costa Rican SIM card in the phone, so now I have paid for tickets with no access to them. I have to admit, this entitled gringo was now starting to go sour. We had to walk back to the hotel where my iPad has automatic login and get the tickets, forward them to an email account I can access on my phone and then we trudged back in the humid morning to the gate and made our way into the park.

We were good and sweaty by now and noticed that the bulk of visitors were heading up the main trail to the left. Wanting a quieter atmosphere to shake off my agitation, we opted for the mangrove path to the right which led us down to Playa Espadilla. How can you remain uptight feeling the serenity radiating up from this amazingly beautiful crescent of sand. A yacht was anchored in the bay and we saw two other couples on the beach.

We took the trail towards Cathedral Point and trudged up multiple staircases and stepped paths to reach the overlook at the top. The only wildlife we spotted were the occasional agouti scurrying among the underbrush. They are cool looking but shy and elusive. My shirt was sweated through and the heat and humidity had us mopping our brows.

Upon descending onto Playa Manuel Antonio on the other side of the point, hung some things to dry and jumped into the warm green water of the inlet. There were quite a few people cooling off and relaxing along the beach. We sipped on our electrolyte drinks and recuperated for a while then pointed our sneakers to the trails to the east. 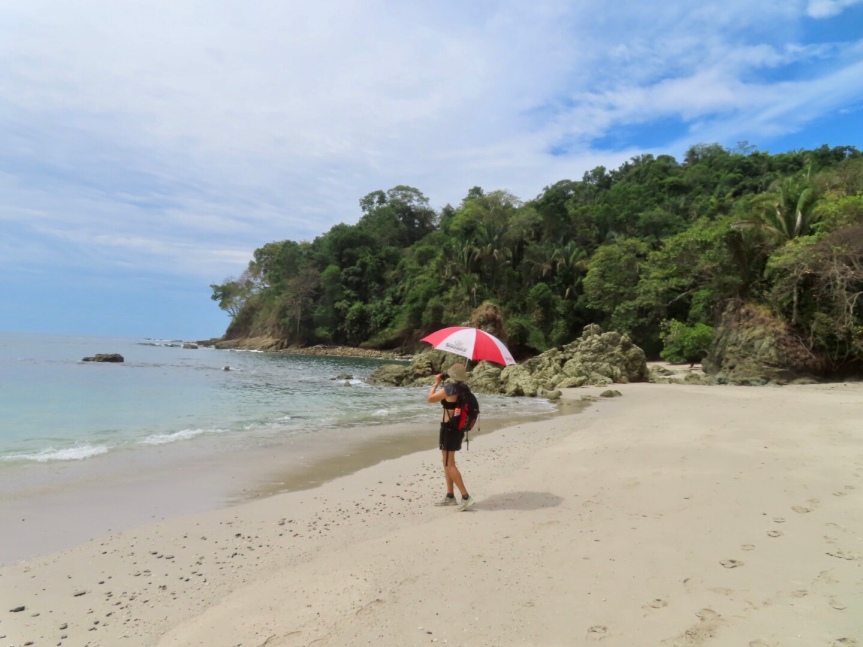 As we reached the end of the sand, a group with a guide had their scope pointing up into the trees. There was a sloth up in the branches doing his sloth thing. We went for a few pictures but he was hard to get focused in. We made a quick stop at the park’s snack bar where a troop of white face monkeys went ripping through the trees overhead.

From there. We took a trail out behind the restaurant that led up to another overlook facing Playa Gemelas. At least choosing the steeper uphill climbs discourages the majority of tourists from crowding up the trails. I had given up wearing my shirt by this time exposing the masses to my doughy whiteness. Just as the path started going up, we came upon a family of squirrel monkeys. Awesome, I had never seen them in the wild before. Now we’ve seen three out of the four species of monkeys in Costa Rica. 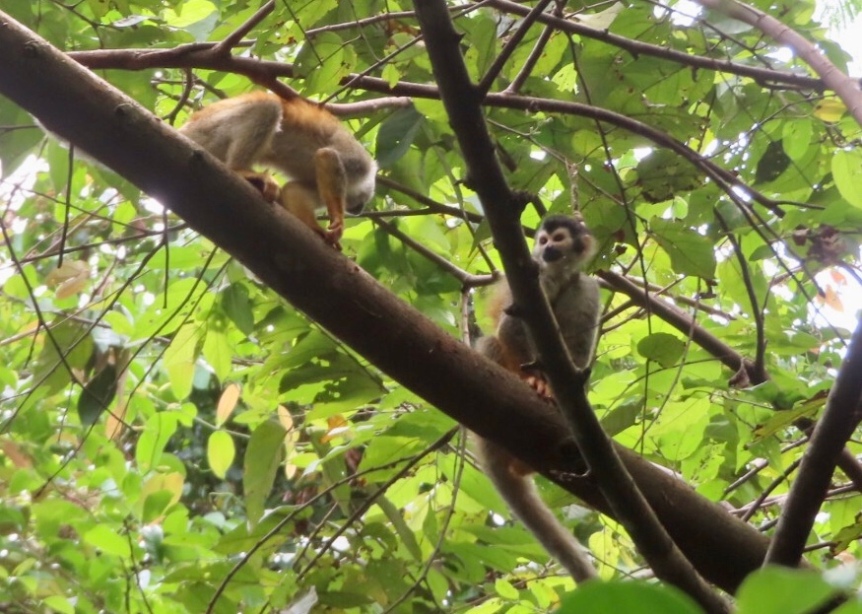 The path up featured beautiful jungle and small streams running past. The forest floor was teeming with hundreds of bright and colorful land crabs. There were some amazing views from the top and we got in some good exercise for the day.

Back at the cross roads by the snack area we took the easier trail through the mangroves towards the exit. Some capuchin monkeys were playing in the branches and it was amazingly picturesque, almost unreal. We would stop often and just enjoy the sights and sounds. Anytime, other people were near, we would wait for them to move ahead or move ourselves to stay alone on the trail. 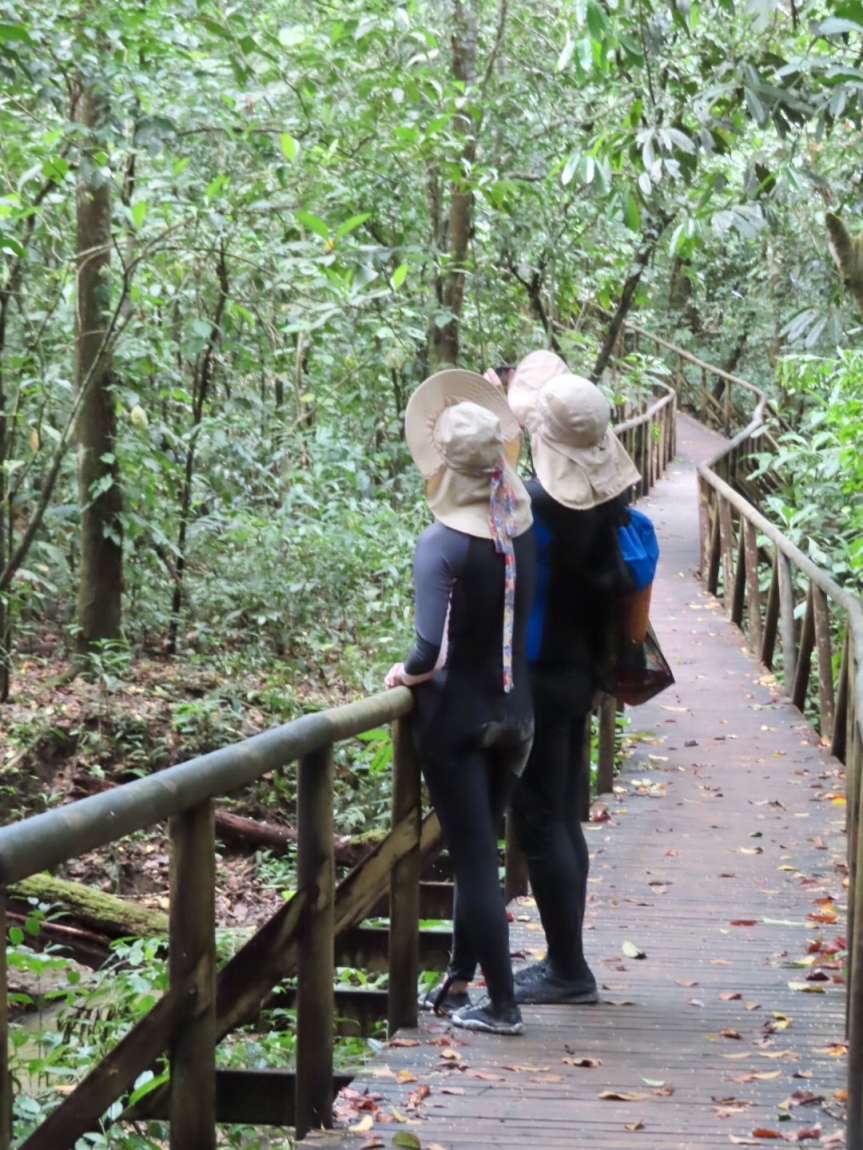 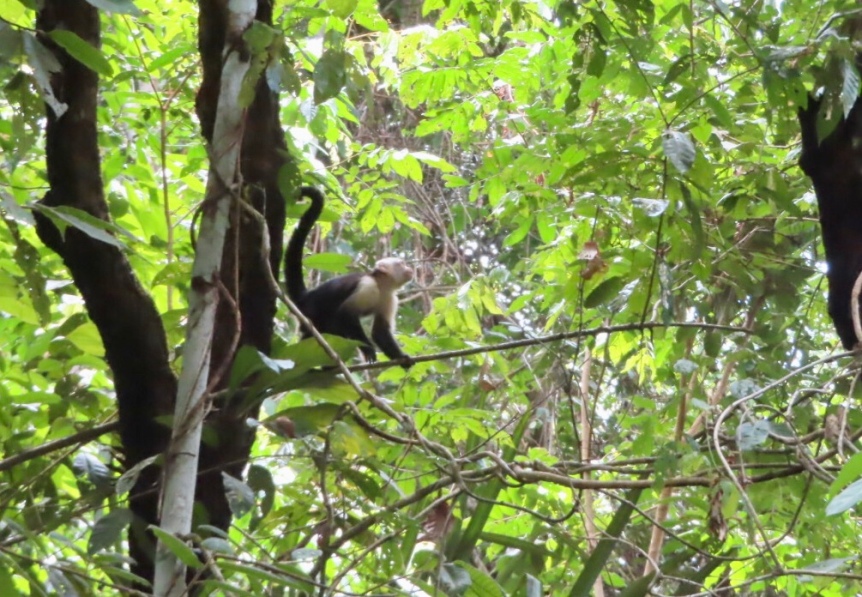 A large crowd was stopped and staring up into the trees on the main track of the park, so we crossed over and there was a happy sloth just hanging in the tree top. We slowly meandered towards the exit spotting a small deer and another sloth up in the canopy. This one looked like he might have had a run in with a power line by the black groove up his back. Before long, our five hour hike ended as we reached the exit and the throngs of vendors were on us offering cold coconuts and waters. We hit the small grocery and rehydrated then walked the short path back to the hotel. 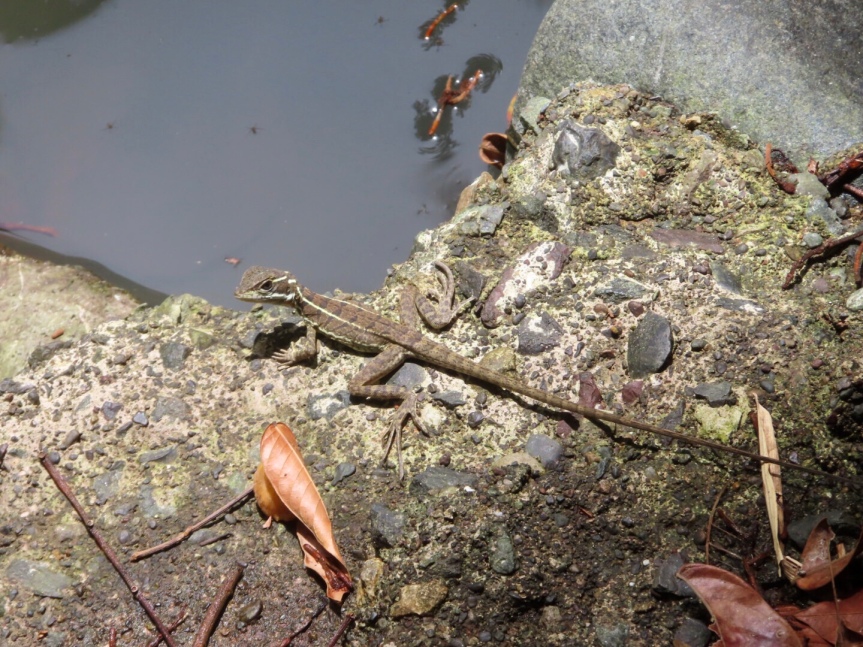 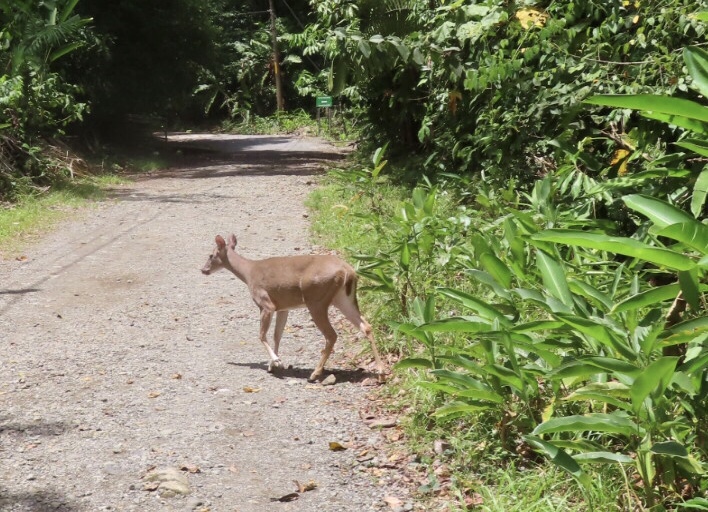 PJ wasn’t digging our out of the way room in the back of the hotel, so we checked with the gal at the front desk and she moved us up to a room with a patio looking out on the beach. We lugged our stuff down the hallway and got set up in our sunnier, brighter space. We showered up and lounged for a few hours before hitting the beach for a little body boarding. The water felt magnificent as we watched people getting launched on parasails and trying to learn to surf on the tiny waves. 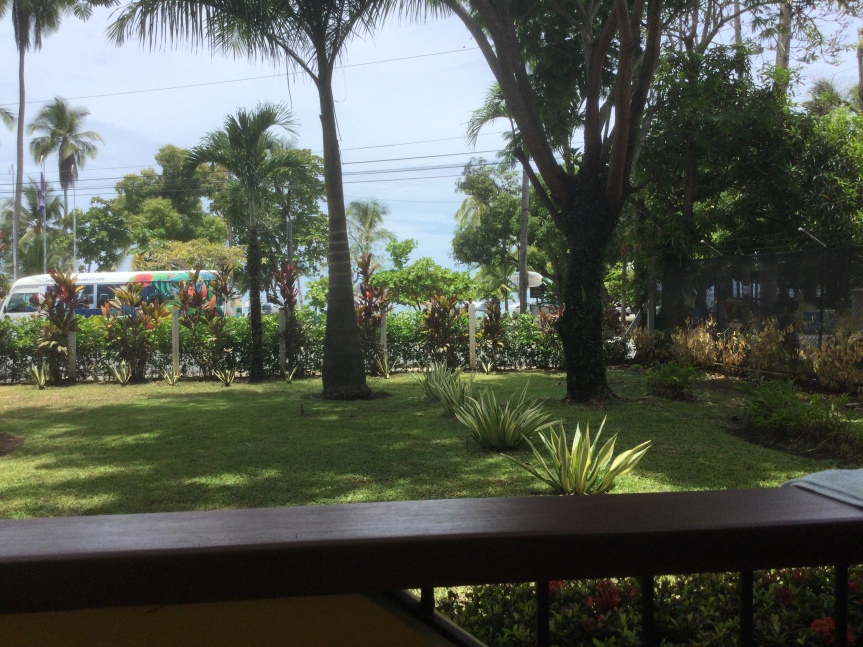 We walked the beach at day’s end, keeping an eye on the colorful characters as much as the golden sunset. We are getting better at dodging touts and saying no thank you to the ubiquitous vendors. Manuel Antonio is truly an exquisite stretch of coastline and beautiful nature. We rinsed off and hit the hotel restaurant where we were the only patrons. Our waiter Edgar was old school and well, just plain old. He wheeled our dinners out on a cart and gave us the royal service. We were glad to give him some business and left an abundant tip. Best casado in Costa Rica.