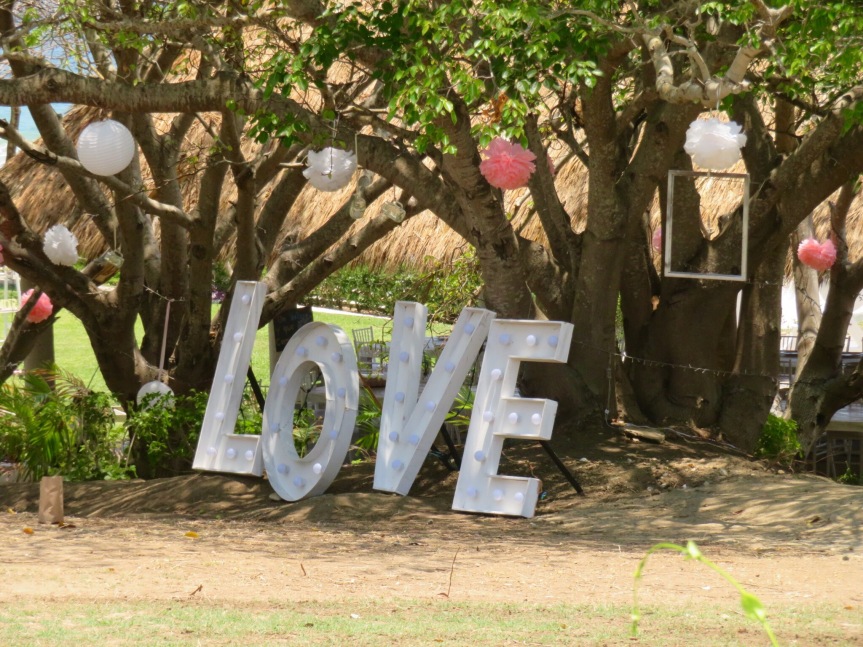 I was still eating my breakfast when Eduardo’s silver sedan showed up at the tower this morning. He came up and joined me then we figured out how to squeeze my board into his Honda. The rear seat folded down and it just barely fit inside. The new road into Sayulita had been completed and we drove down to the beach only to find that there was no parking available anywhere. Terminally congested and overhyped. We circled around once, then decided to shake the dust of Sayulita from our sandals and continue down the road.

The road down to Higuera Blanca was narrow and the jungle is brown and dusty, thirsting for rain. We took the dirt road at Patzcuarito and drove until we reached the mostly dried up river. Some masons were building a well next to the road and when queried, they told us to drive down the river until it ends at the sea. Eduardo was game and dropped the Honda up to its doors in the shallow stream and bumped our way down to the land crab breeding zone. I don’t imagine we’ll be doing this when the rains start up. 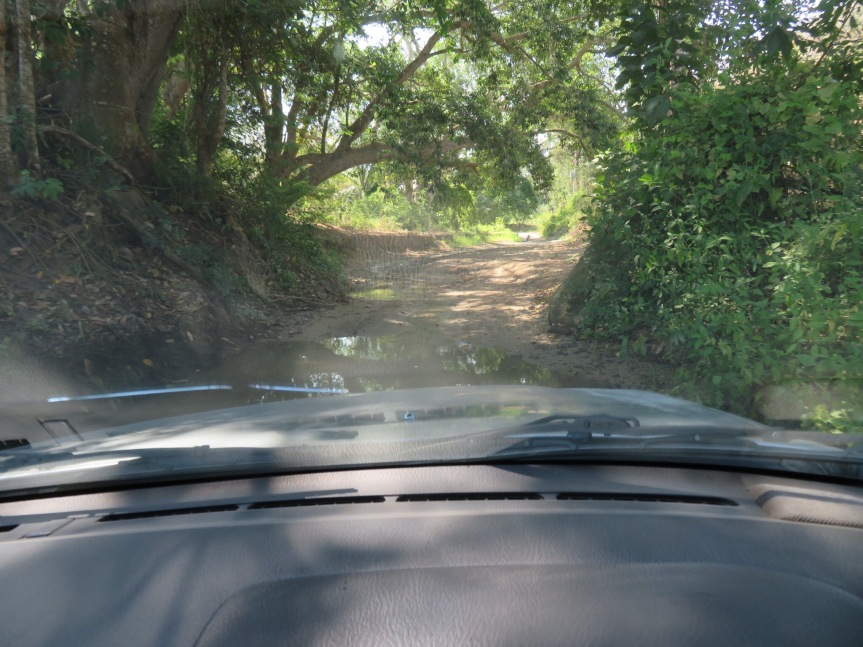 We stepped through an opening in the barbed wire and emerged on a beautiful stretch of open beach. Some locals were casting their lines into the surf trying to hook one of the many fish that were breaking the surface of the water just a stone’s throw from the shore. A hyper dog was racing back and forth bouncing his nose on the sand with every leap. Two men were catching bait in the creek by throwing rocks and stunning the small fish then racing back to their fishing poles and casting them out into the flashing schools of fish.

Beautiful estates book ended both ends of the beach. Large compounds built into the hillsides. One of the guys fishing grew bored and grabbed his surf board and paddled out into some semi-closeouts and immediately pulled into a snappy little barrel. It was around 10:30 and several cars were pulling up and unloading at the fence, mostly families and young surfers. 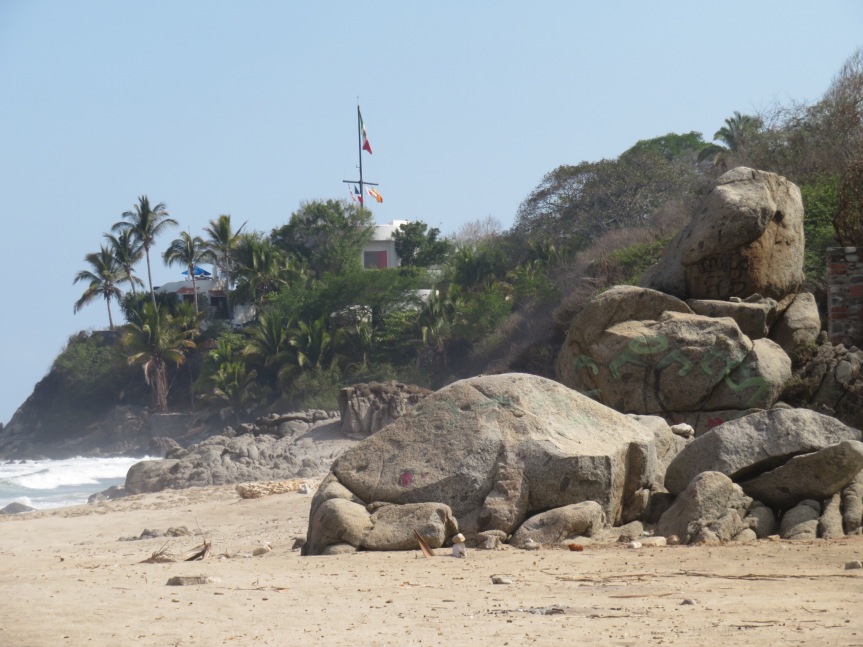 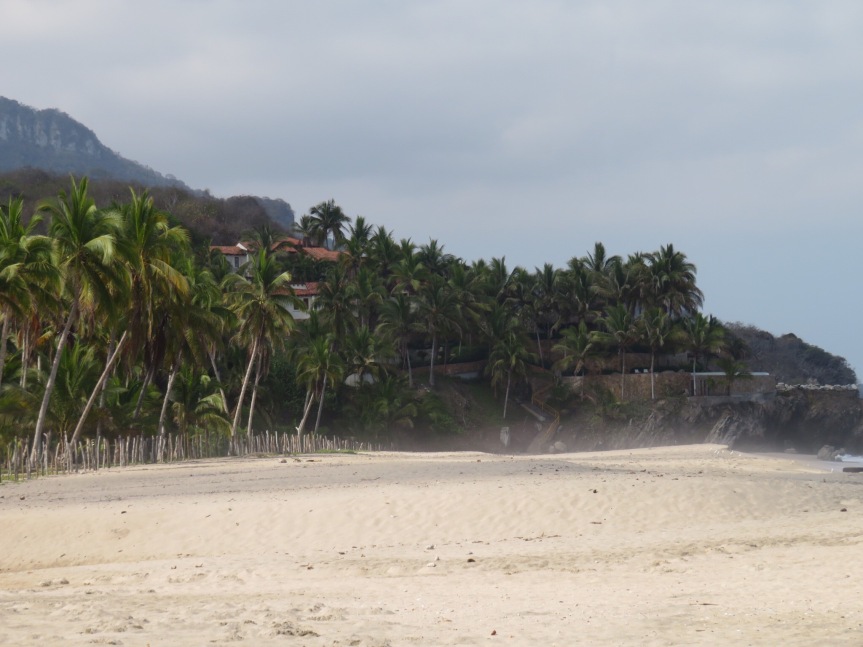 We backtracked through the shallow stream and continued our tour heading south to Litibu. The public access was just south of the large resort complex. The trail dropped down to a rocky headland and a few guys were trying to catch some waves on paddleboards down in front of the hotel. Oyster divers were working the rocky area just to our left. A few tourists from the resort had wandered down to the reef and were looking out to sea at the pelicans dive bombing the fish. 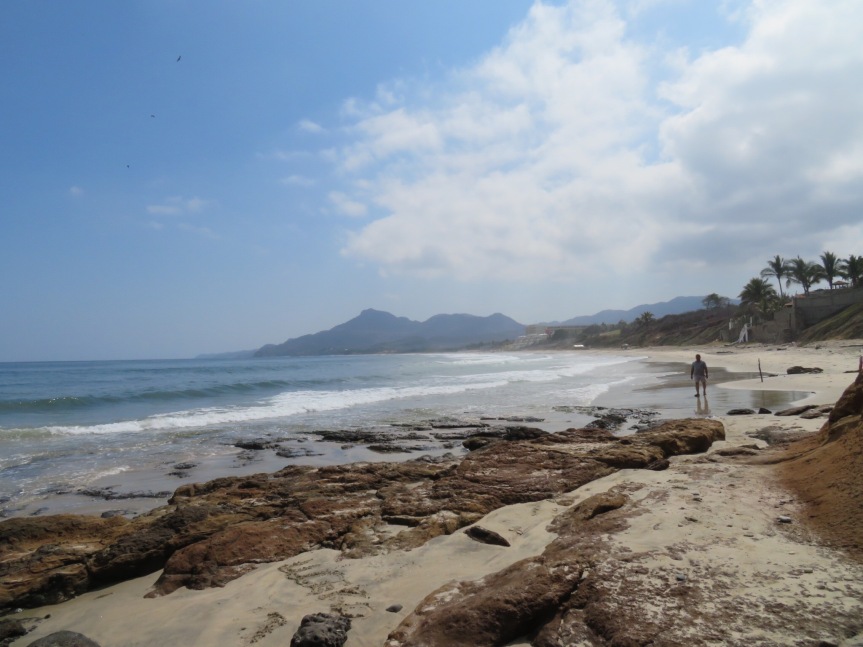 Our next stop was Punta Mita. We parked at the boat launch and dodging touts for tours and time shares, we walked out on the jetty and looked down towards the giant facility that is now the Four Seasons. The size of a small city, they own all the point from south facing to west facing. All beach access is closed to non guests. They selected the best beaches in the area, moved all of the residents off with either threats or promises of great benefits then left them all with very little in compensation.

We stopped at another small marina where some surfers, mostly on SUPs, were catching some small waves in front of a high rise. Eduardo used to take tourists out on boat tours from here. His old boat, Jennifer, was still floating among the panga fleet inside the rock jetties.

We continued down to La Lancha, where we hiked through the mangroves out to a beautiful beach at the end. There were some small waves rolling in over the reef out in front. Another crowd was working a small wave a little to the west. Eduardo found a spot in the shade of the bluff and I paddled out to catch a few little waves. They would break over the rocks then quickly back off over deeper water inside. The aqua blue water was beautiful and the sun was shining. It was great just being out in the warm tropical sea. We relaxed for a while in the shade then made the hike back out to the highway. We drove across to the Oxxo and after waiting interminably for the recalcitrant clerk to finally ring up the entitled young Chilangos in front of us, we drove down to Distlladeras with some cold drinks and peanuts. 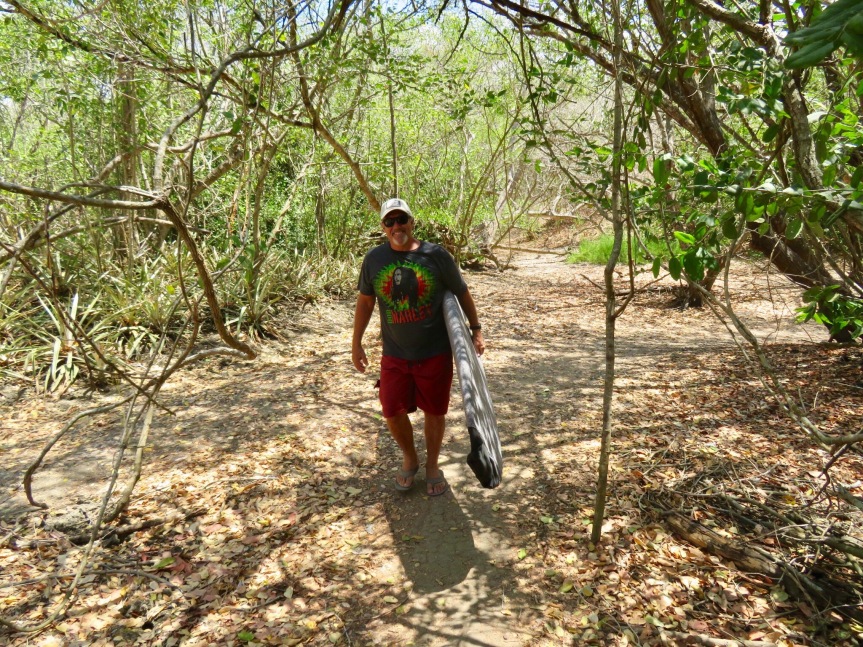 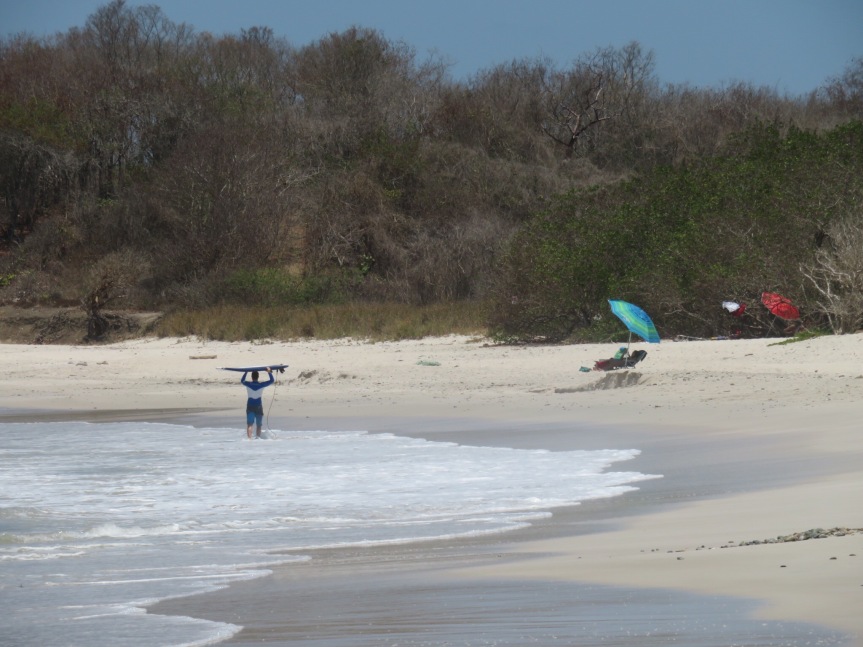 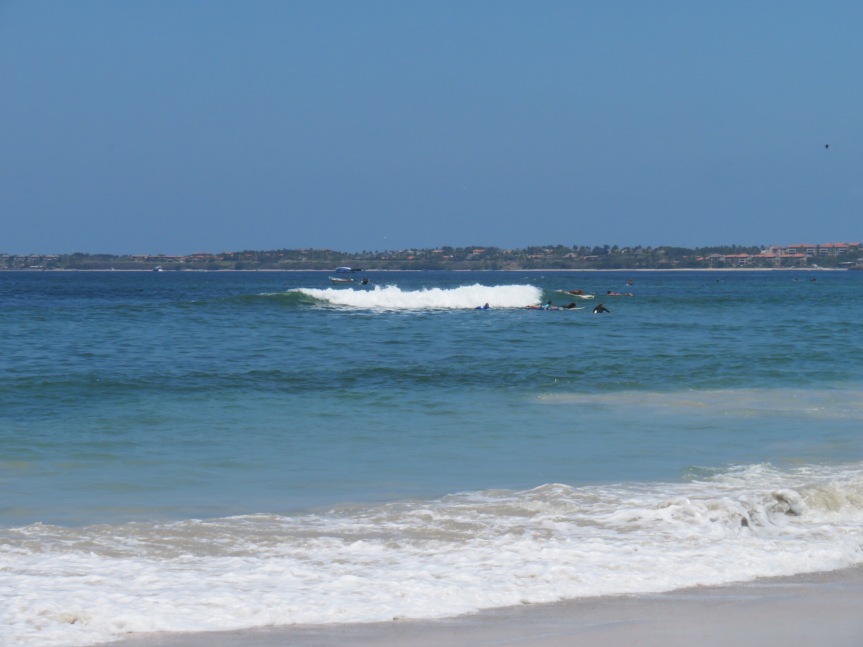 We passed by Shannon’s hotel and gave it a quick peek. It looks pretty elegant. I’m getting excited for his arrival Sunday. Just a half km down the road is Distilladeras. The old entrance was closed up, but next to the Nahui Resort, they have opened a large parking area. We locked up the Honda and went down to the beach. The restaurant from the resort has a large number of tables set up on the sand. Most of them were full and the waiters were hurrying awkwardly across the soft sand in their dress shoes. This is a 3 day weekend in honor of Mother’s Day, so there are lots of people from inland cities out for a beach getaway. 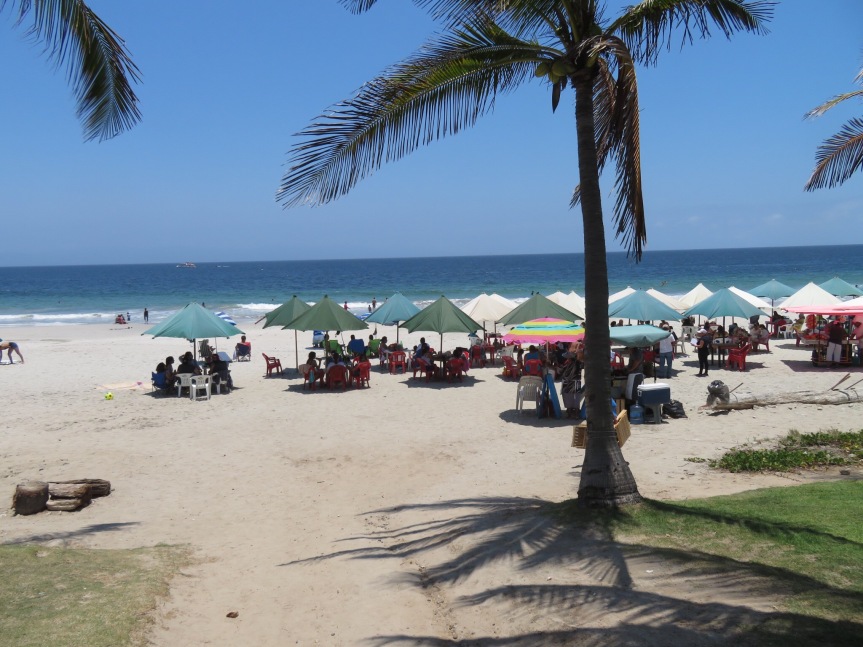 We headed back home taking the same route we had come. All along the ‘Riviera Nayarit’ beach access is getting more and more limited. Big hotels, rich gringos and corrupt government officials who have carved large tracts of beachfront property for themselves increasingly close off any small entry or trail that might allow outsiders onto their beaches. Even in the short time since Eduardo has been up here last, two of the access points he usually uses have been fenced off. 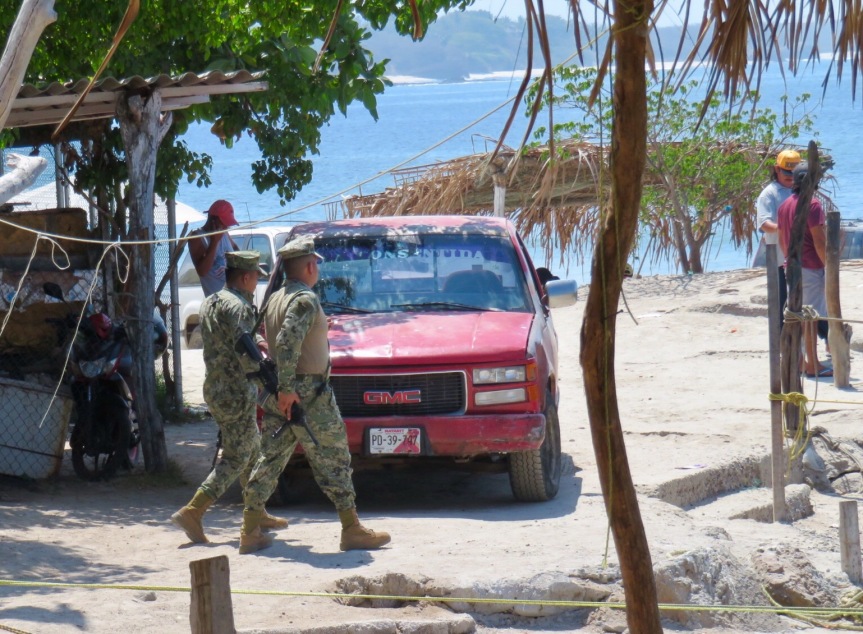 We stopped at a gritty little barbecue chicken shack on the side of the road in Higuera Blanca. There seem to be a lot of them along this stretch. Pollo Alley. We ordered up a whole chicken with plates of rice and salad and sat in the shade watching the ten year old boy run deliveries for the restaurant on his motorcycle. A bird cage full of baby rabbits decorated the shack. The chicken was hands down, the best bar-b-que chicken I’ve ever had. Eduardo claims it is the wood that they use for grilling. So, skip the fancy beachside resort, save your money and get the finest chicken in Mexico on the roadside in Higuera Blanca. Don’t mind the dust from the passing cars. 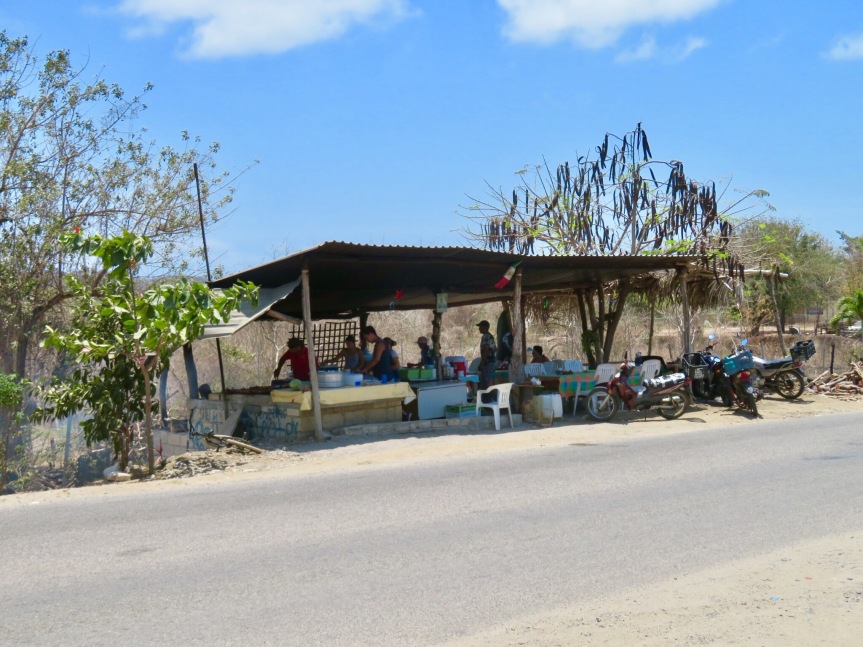 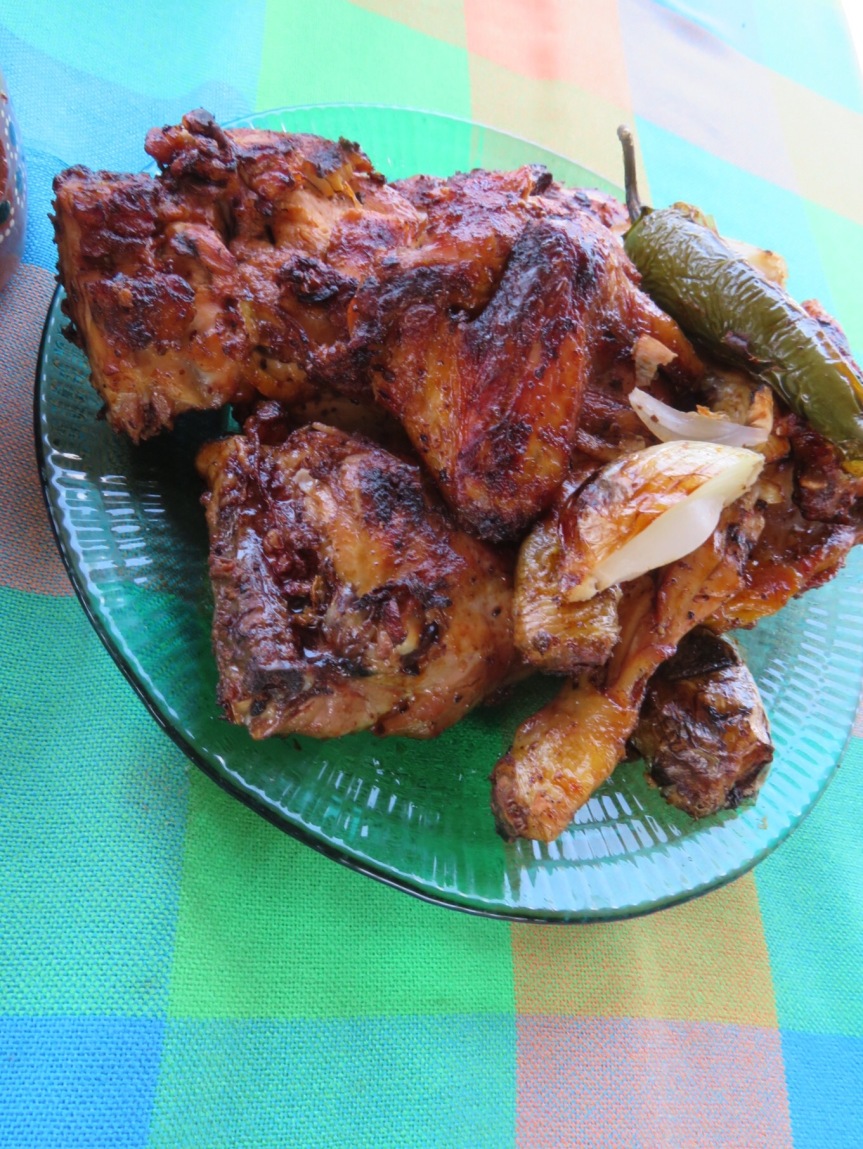 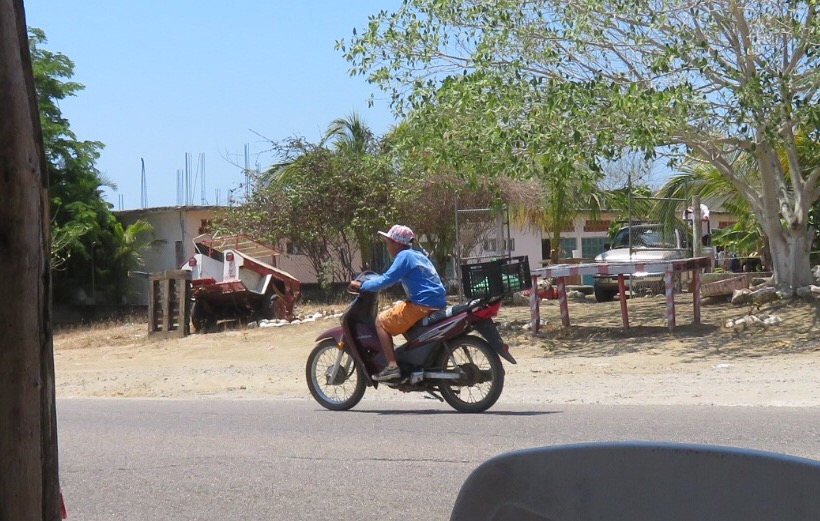 Now, a nap moved to the top of my to do list. We made a quick stop at a road side shrine to give thanks for the tasty chicken, then made tracks for home.

Thanked Eduardo for acting as chauffeur then went up and unleashed the hounds. They didn’t appear too excited about wandering around in the afternoon sun, so we made it a quick walk then went out to lounge on the beach out front.  There were lots of cars parked at the beach and a moderate crowd out front. I sat back in my chair and fell into a meditative state reflecting on my day. A cool breeze was blowing, the dogs were content and we watched people excited to be on a beach holiday frolicking in the sun. Doesn’t get much better.  Returned to the tower, made phone calls, read and napped. There is a big group of campers at La Parota, tons of kids with flashlights chasing each other around. Lots of fun, lots of laughter. We’ve got one tent and one apt. rented in our compound. Muy tranquilo. 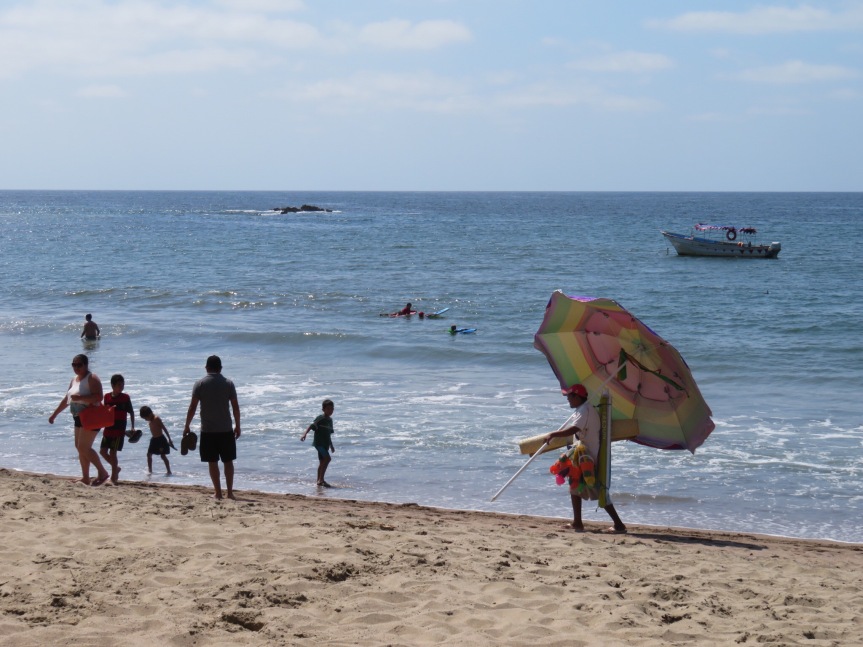 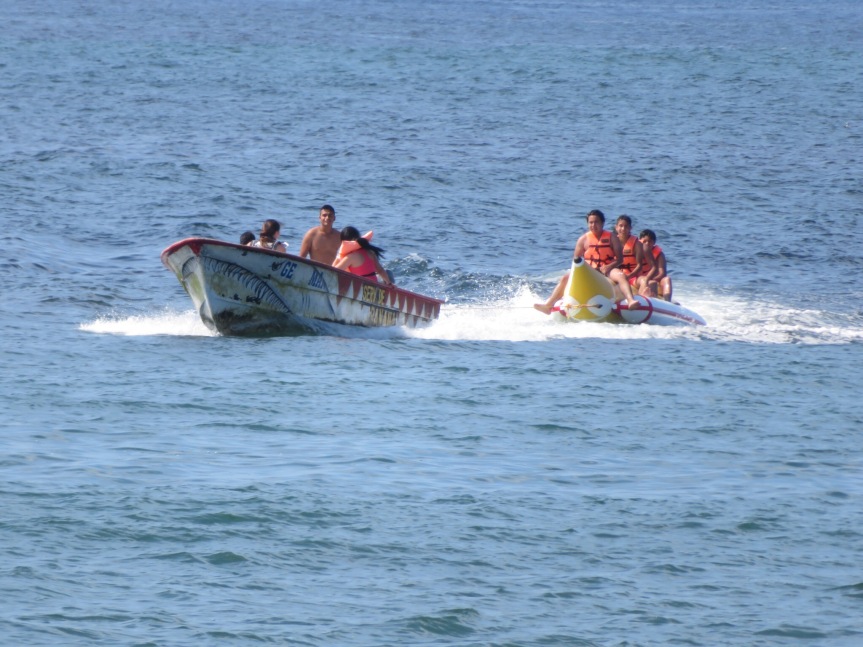 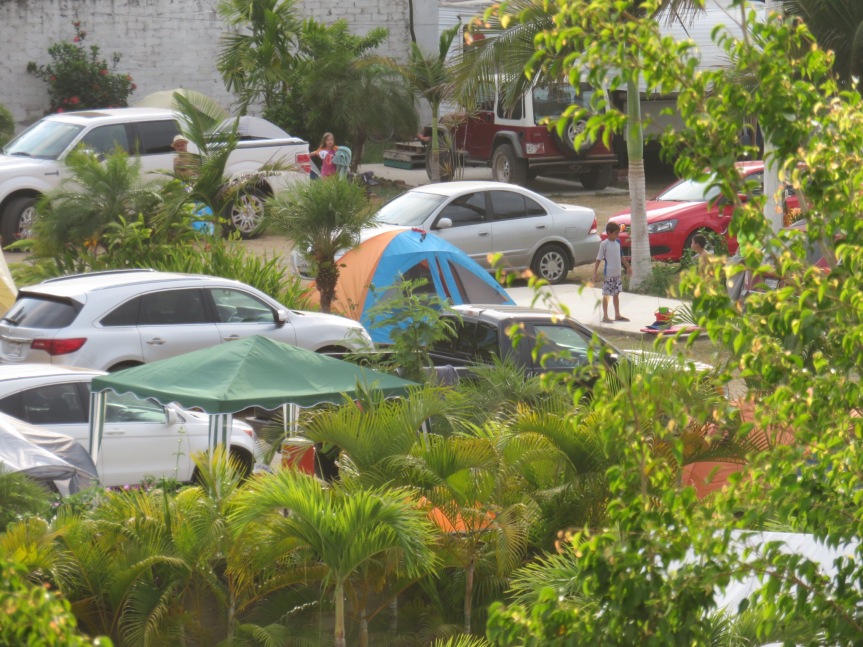 One thought on “Punta Mita”