I was up with the sun. Actually, I slept very little with rumble of highway noise and the sounds of movement in the neighborhood. I aired up all of the tires and checked all fluids before waking Edgar and saying adios. We unlocked the gate and talked a while before I pulled out into the morning traffic and turned towards Lukeville driving down highway 2. After Edgar described the busyness of the Nogales crossing and the poor state of the road going in, I decided to try Lukeville instead. 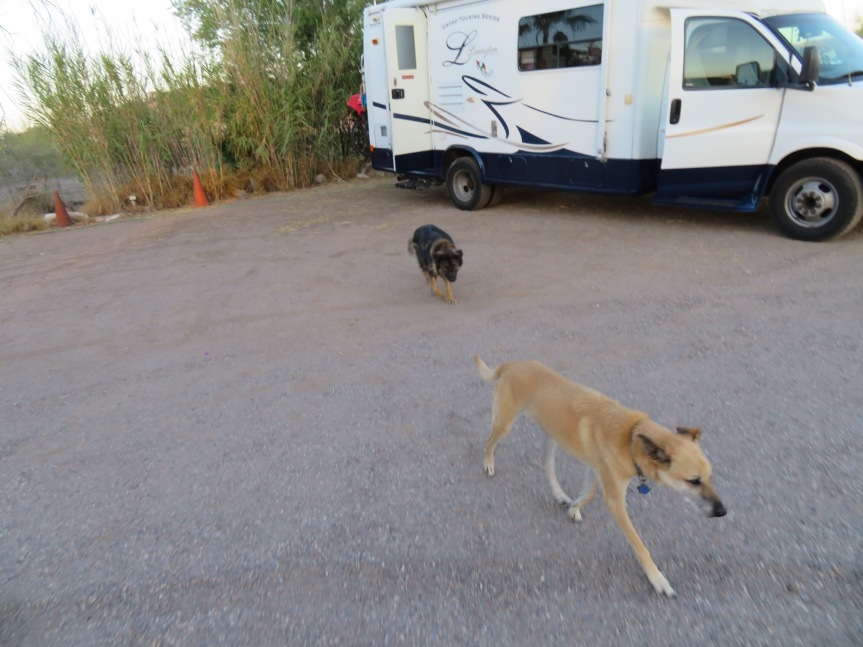 I’d come across another blog by a lady named Kathy who described their crossing not long ago and honoring my aversion to crowds, I decided to follow their lead. Thanks for posting pictures of Pitiquito and the steps you took. The road from Santa Ana to Caborca was a dream. Smooth concrete with two wide lanes. Traffic was light and the going was easy. When I arrived at Pitiquito, it was just as the picture. I pulled in and I was the only client they had the whole time I was there which wasn’t long. Six employees and me. One guy jumped right on my case and we walked out and removed the vehicle sticker then brought in the paperwork to a girl who was already on the computer. She cancelled me out, handed the document and I was in and out in fifteen minutes. The aduana center is located at right around Km 93 shortly after Altar if coming from Santa Ana. There are openings in the concrete k-rail. Just cut across and park at the south end. 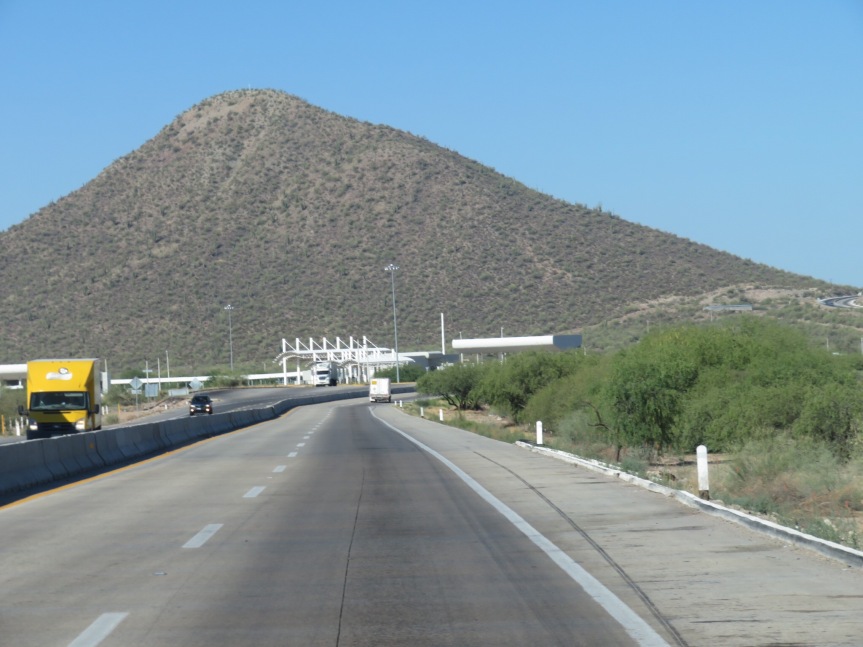 The road had a few rough patches after Caborca but nothing worrisome. Managed to hold an easy 55 to 60 mph. Lots of trucks coming the other way. A bunch of cars were lining the road ahead and when I came up even, a Tecate beer truck had gone over and people were stacking up cases of beer. A guy was flagging people past, but more cars were pulling over to check it out. I hurried past and kept running for the border. 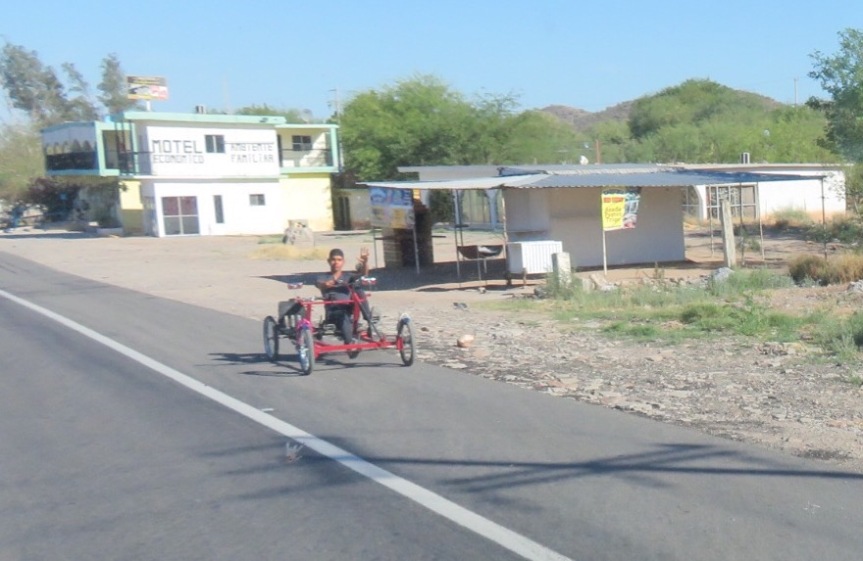 When I reached the border and was nearing the overhead structure on the Mexico side, there were numerous cars parked in the center divider area, so I pulled in and asked a machine gun toting youth in desert camo where to turn in my tourist visa. A woman standing around waiting for cars from the US side pointed to the small glass windowed office. I went in and there was no one at the counter. A woman was working in an adjoining office. I asked if this was where to cancel the visa and she said yes and walked out to the office and banged on the window to get the attention of a man joking around with his friends outside. He came right in and cleared me from the computer and put a stamp in my passport then sent me on my way. Again, no line. Not even one other person. I’m loving Lukeville. I pulled up to the US side of the border crossing and I was the third car in line. Three cars! Not three hours like San Ysidro, three cars. A few minutes later I was at the gate.

The young man asked the usual questions, made a comment about the TRUST license plate and sent me on. What about this paperwork I’ve got assembled for the dogs? Just move along and have a nice day. Ten minutes max. Lukeville is the place. I probably shouldn’t be saying it. Keep it to yourself.

The road in Arizona was much like the road in Mexico, one lane each way with no shoulder. But the repair on the potholes was much better. Really smooth. Get the crew to give the Mexican team some lessons. Lots of empty country. I reached Ajo and felt like I was still in Mexico, maybe just move the border up a little to include it. When entering town there was a tope. The city was centered on big plaza surrounded by adobe looking buildings and a church. Then on the way out, there was a big roadside shrine to the virgin.

Pushed on for Gila Bend and some gringo style civilization, a Love’s truck stop and a McDonalds. Hate to admit it, but I had a cheeseburger. Don’t tell PJ, but Cali and Koda had cheeseburgers too. Gassed up, $97.50 and that at Arizona prices, 38 gallons with the gauge still showing a quarter. Set my sights on Yuma but the Monster energy drink I downed in Mexico wore off and when the wind kicked up after Gila Bend and I was white knuckling it trying to stay in my lane, I gave up and exited at Dateville. There was an RV park right there but it advertised full timers for $150.00 a month, I wasn’t sure it was a good idea. 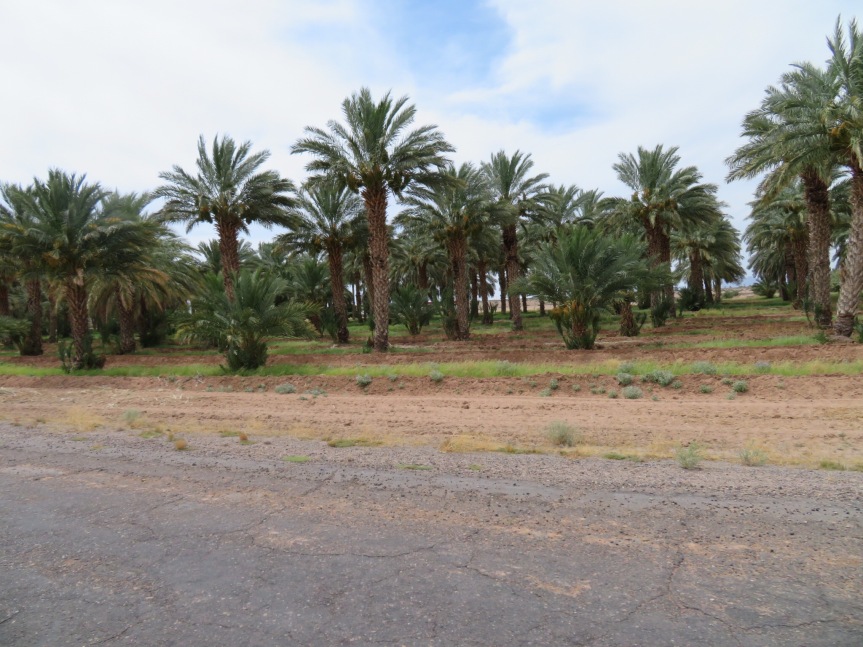 My T-mobile is useless in the US. As soon as PJ gets out here, I’m dumping them and going on Verizon with her. I had no data and a few wobbly bars of phone. I called PJ and she went online and found me a little out of the way campground just down the road and I drove on over to the Oasis RV park. Jim came buzzing over on his golf cart and got me set up in a spot near the pool. Another ghost camp. I’m the only guest in a good sized open to the desert getaway for snowbirds. Only the birds have all flown the coop. 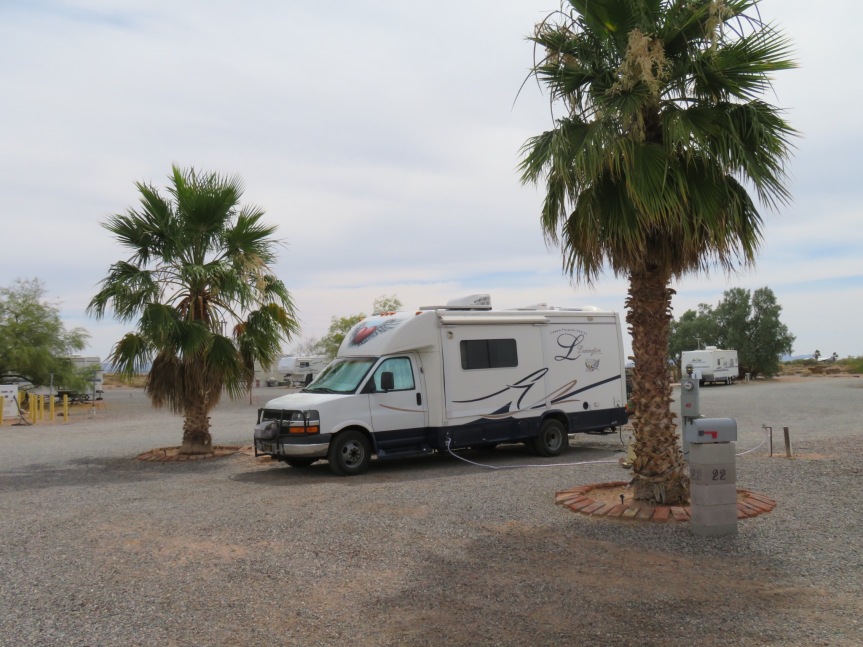 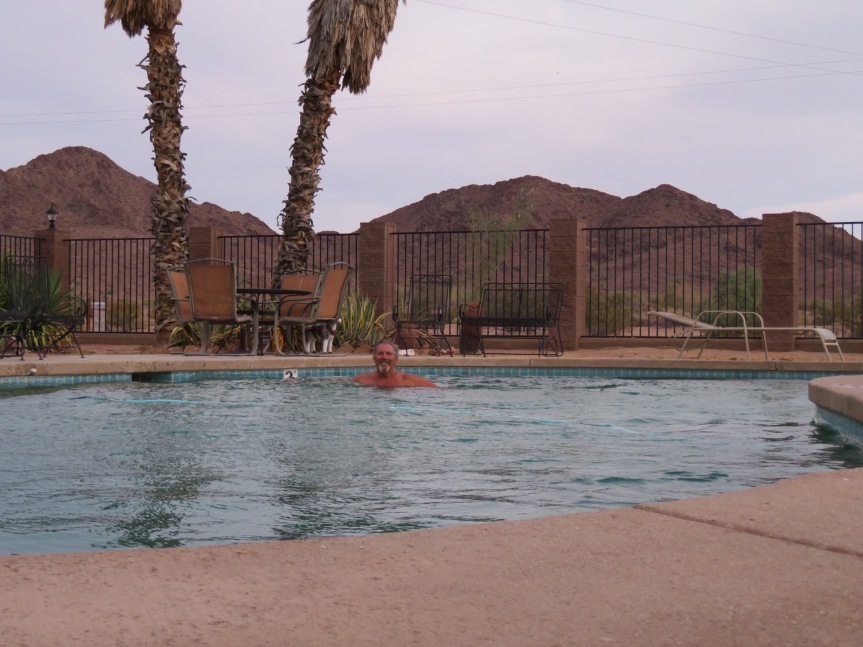 I laid down for a little while then cleared the stuff on the dinette side and filled the water tank. Then I organized a bit before exploring the area with the pooches. Ocotillo and sage. Jim keeps a clean camp. Nice graveled sites with little concrete patios with antique looking brick added. I went for a swim then cooked a few salchichas and sat in a beach chair on the patio enjoying the warm wind blowing across the desert. Jim came by around sunset and we talked for twenty minutes or so mostly about how a guy ends up owning an RV park out in the middle of nowhere. Pretty cool. Another outing for the girls then back into their mobile den for the night. Wind is dying quickly. Hoping for no wind tomorrow a.m. 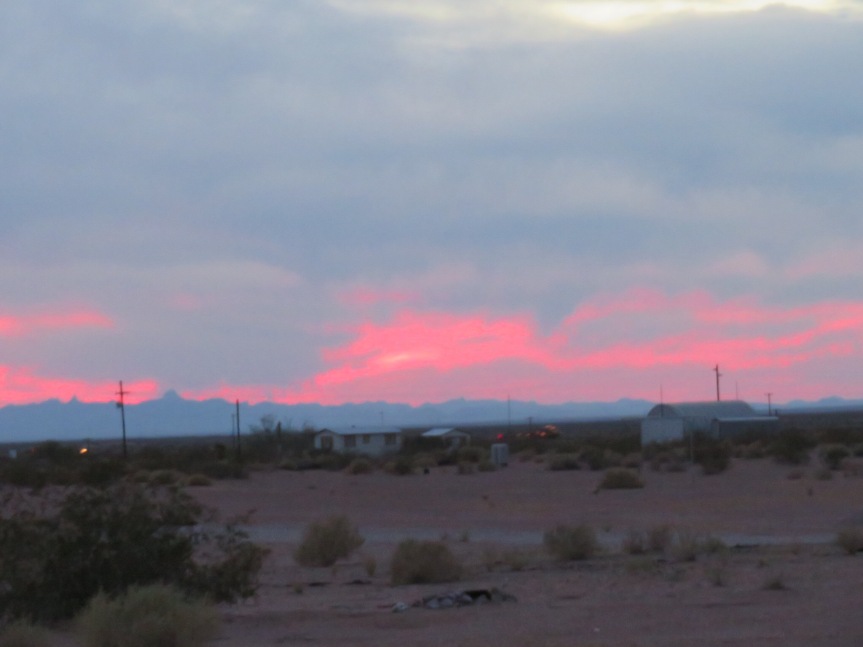 3 thoughts on “Lukeville, I am your Father”