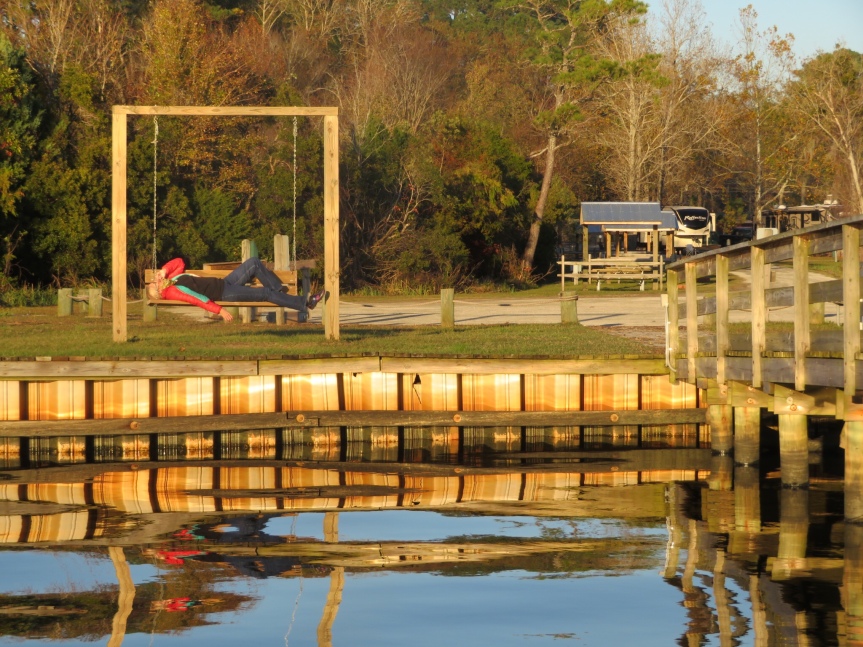 After a perfunctory dog walk, I placed Cali back in the rig with a sleeping PJ then hurriedly hoofed it across the main road to get in a quick hike on the Bald Cypress Trail. The ranger in the office yesterday recommended it as an interesting walk through the swampland of Virginia. I thought I might spot some native wildlife but I was getting a little less hopeful when a heard a couple kids shouting at their dog while they tromped down the trail towards me. The two Chinese dudes that were coming up behind me were having a loud and animated conversation in Mandarin so I stepped to the side of the trail and acted like I was raptly interested in a section of bog featuring the pointed tree stumps that dotted the swamp.

They disappeared down the trail and I continued stealthily moving down the path. A moment later, I got startled out of my pants when the buffed out marine silently jogging up behind me hollered out “on your left” as he went speeding by. I hiked as far as the boardwalk that stretched out over the swamp. I had a quick look around then figured I had better be working my way back to camp. I had underestimated the distance I needed to walk to reach the trailhead so my actual hike time was shortened due to the extended time spent walking on the pavement to get there. I covered about 4 miles total for my morning exercise.

PJ had been busy and the RV was pretty much ready to roll when I got back. A quick bowl of cereal and a few final details and we were on the road south heading for New Bern, NC. After about a half an hour on freeways, we ended up on smaller highways and two lane roads for the rest of the trip. We made a brief visit to the Dismal Swamp. Just the name made it worthy of a quick look. I had visions of the fire swamp from the Princess Bride. There was a boat dock on a wide expanse of bayou and a ramp with a rack of kayaks. This part of Virginia and North Carolina is extremely swampy. The highway through here is a raised bed of fill with submerged trees along both sides of the road. 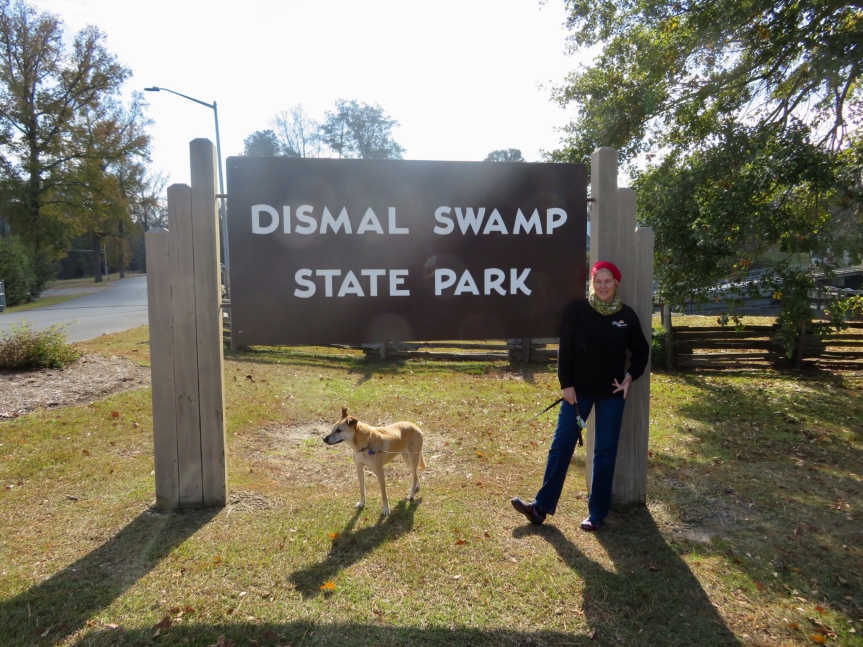 Those old cotton fields back home

An hour or so later we pulled into the campground on the banks of the Neuse River and after refilling the propane, we slid the RV into a pull through spot with a furnished patio overlooking the fountain on the ornamental pond out front. PJ and Cali had a look around while I got everything set up. Not a bad spot for a short overnight stay. 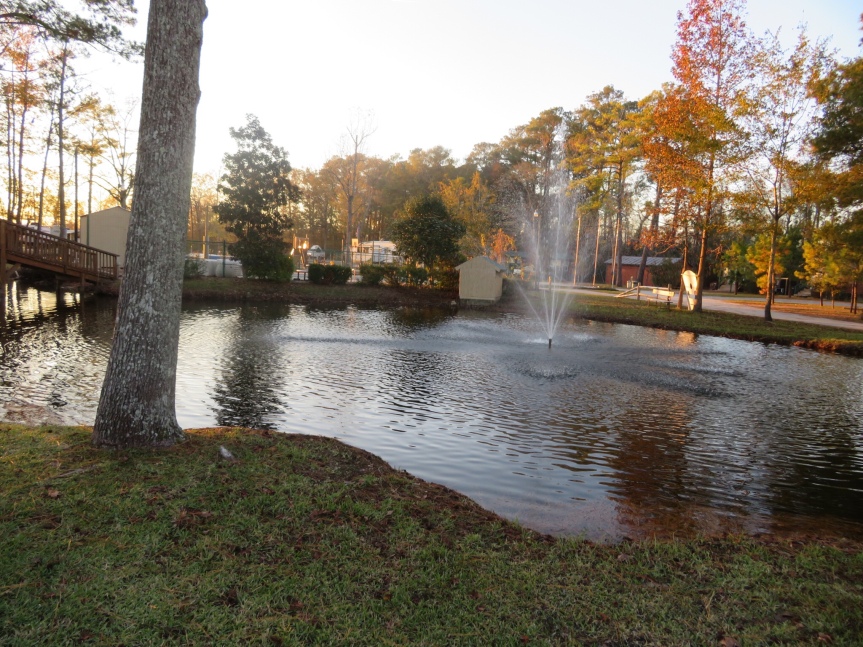 We walked Cali down by the dock and explored around the camp. It was a nice afternoon. The first time in a long time that being out without a jacket felt comfortable and easy. The campground is still recovering from hurricane Florence. The office had four feet of water up the walls when the river had overflowed its banks with the surge. The managers were working out of a small trailer just inside the entrance. 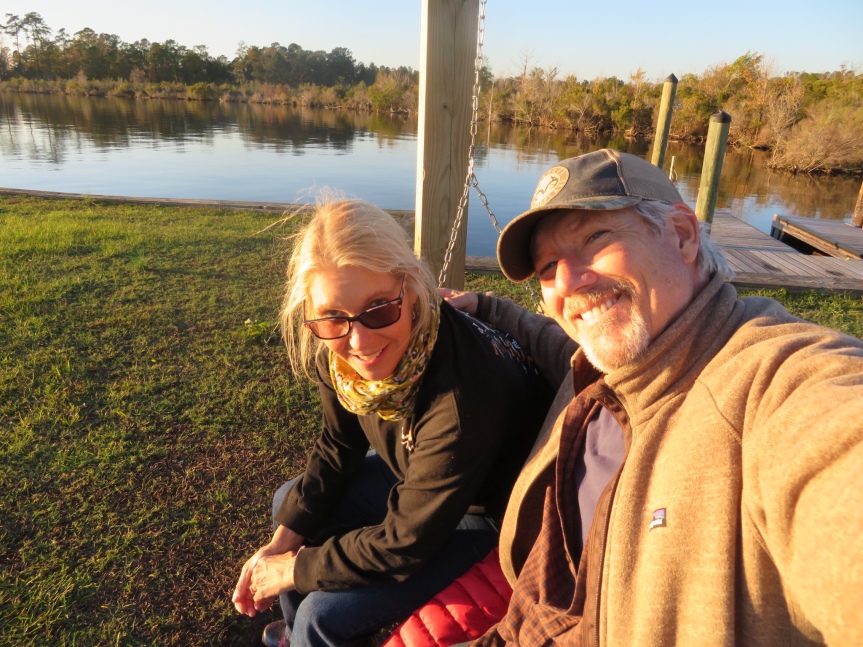 We returned to the dock area for an awesome sunset across the water. A few other campers were milling around enjoying the spectacle and relishing the warmer weather. We had a relaxing dinner and rested easy inside. PJ called a good friend of her father’s who lives here in New Bern to invite him out for breakfast, but he’s busy getting ready to hit the road to New York for Thanksgiving so we’ll have to catch up with him another time. 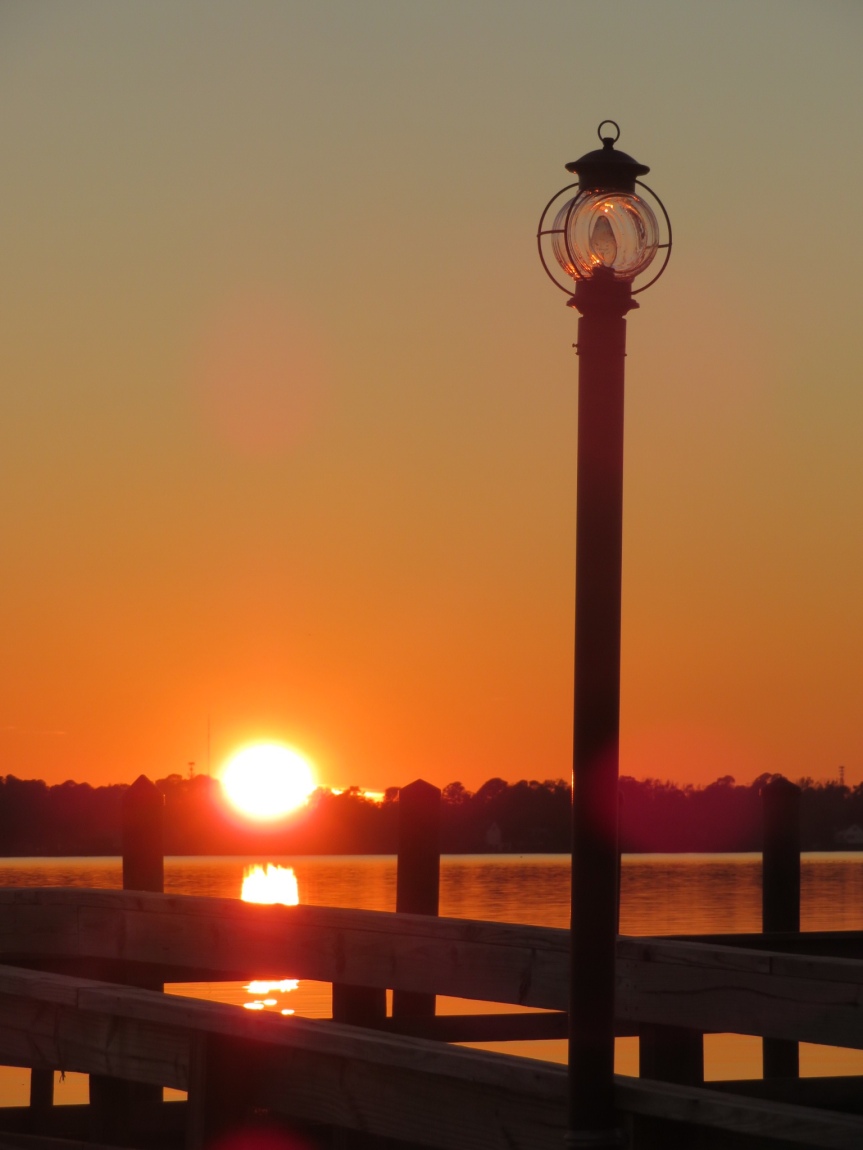 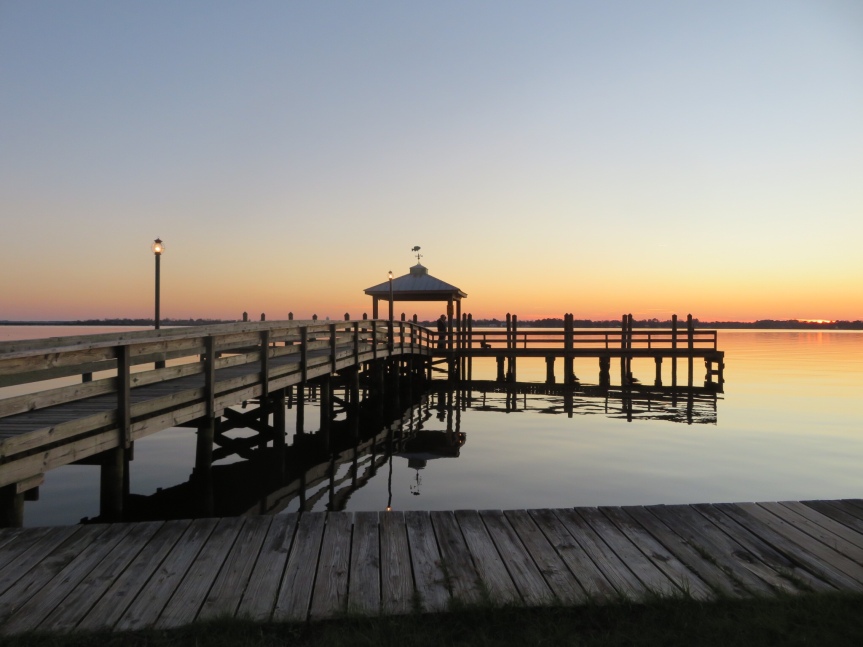 2 thoughts on “Feeling the (New) Bern”