Man, this rain story is starting to get a little repetitive. The last time I saw this much rain was when I was living in Costa Rica and it wouldn’t stop for weeks. It started last night and had picked up steam by daybreak. Cali and I stayed inside as long as we could but by the way she was standing in the door well, it was obvious she was needing to find a suitable bush. When the rain slowed a twitch, we did a quick round of the back loops and hurried back before the next deluge arrived. 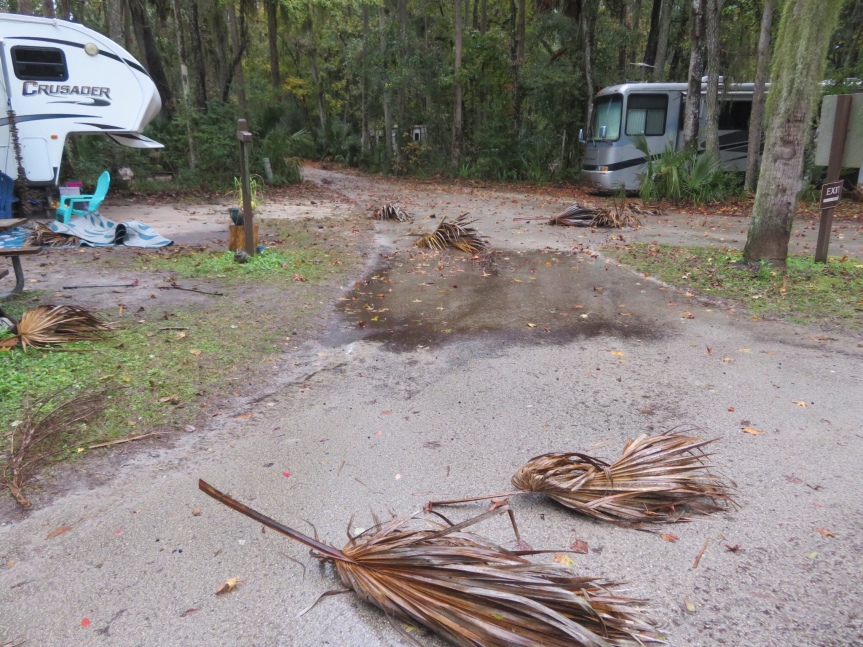 For about an hour during the mid morning, a cell of severe weather blew through our little forest jostling the tall trees and sending palm fronds and branches hurtling through the air. It was getting hairy watching all of the flotsam dropping all around. A few medium sized branches banged onto the roof and lots of small debris was raining down. I went out to see how bad it was and walked up to the end of the row to see if the camp host had any information. He wasn’t home but a few larger palm fronds flew by bouncing off of their trailer. Some bigger chunks of foliage started landing nearby and it was clear that I’d be better off inside so I hustled back to the RV. 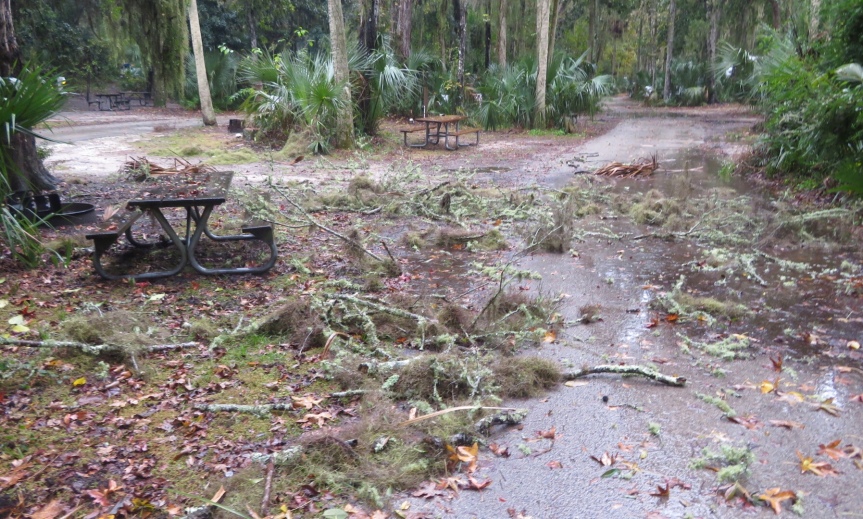 It struck me as odd how quickly the 60 mph winds came and went. A half hour after they hit, it suddenly calmed back to pouring rain with maybe 20 mph wind. Central Florida had some tornados around the same time so I guess it’s not that unusual. There was another lull in the downpour, so Cali and I headed back outside to survey the aftermath. Our road was obstructed by lots of fallen branches and when we walked around the lake loop, we noticed a car with it’s rear window busted out by a branch from the large oak overhead. 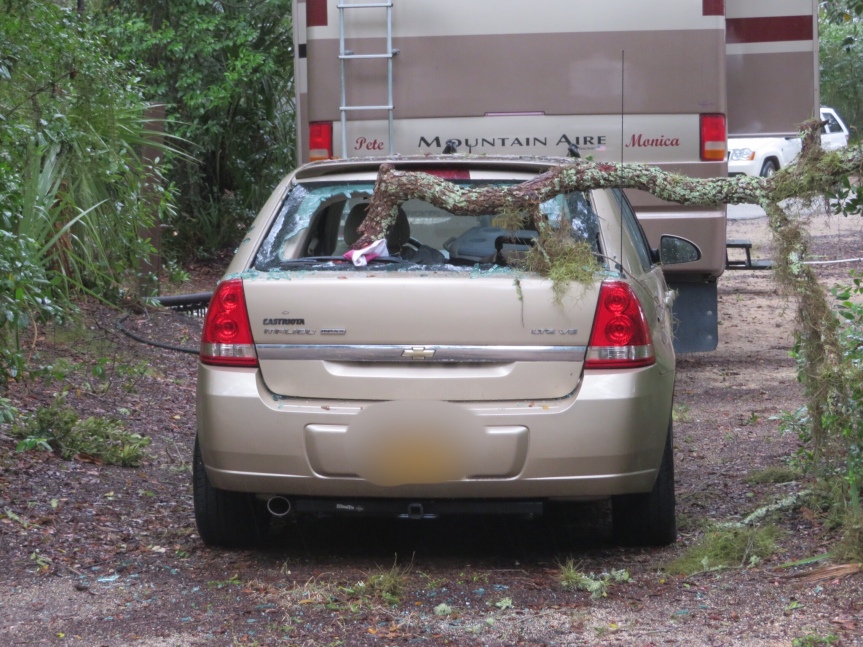 A little later, the camp hosts were out front clearing the road and loading some of the rubbish onto their little cart. The dog and I went out for another stroll through the campground. Over on the far side, we spotted some more damaged vehicles. A large branch had taken out the awning on a trailer behind the bath house. More people were emerging from their lairs and in the late afternoon, a slight sliver of sun actually poked its way through the clouds. 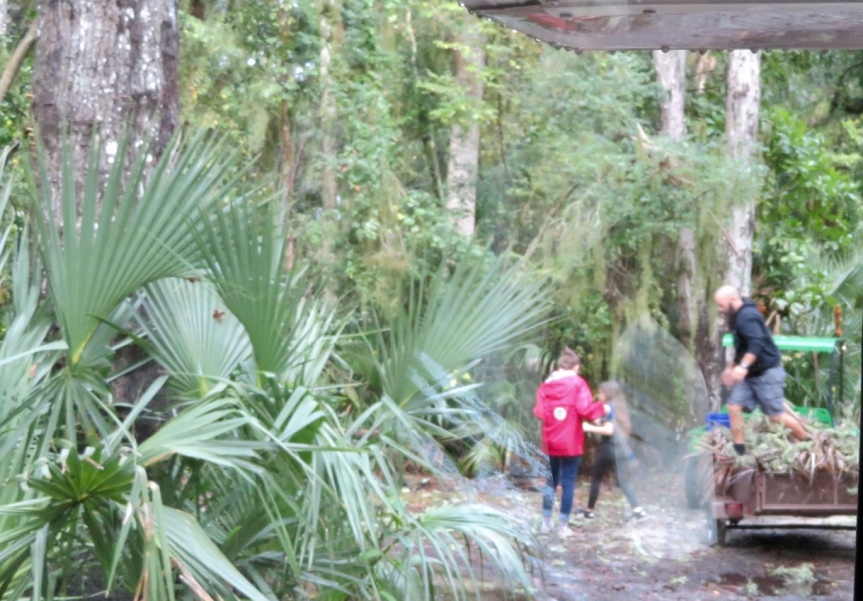 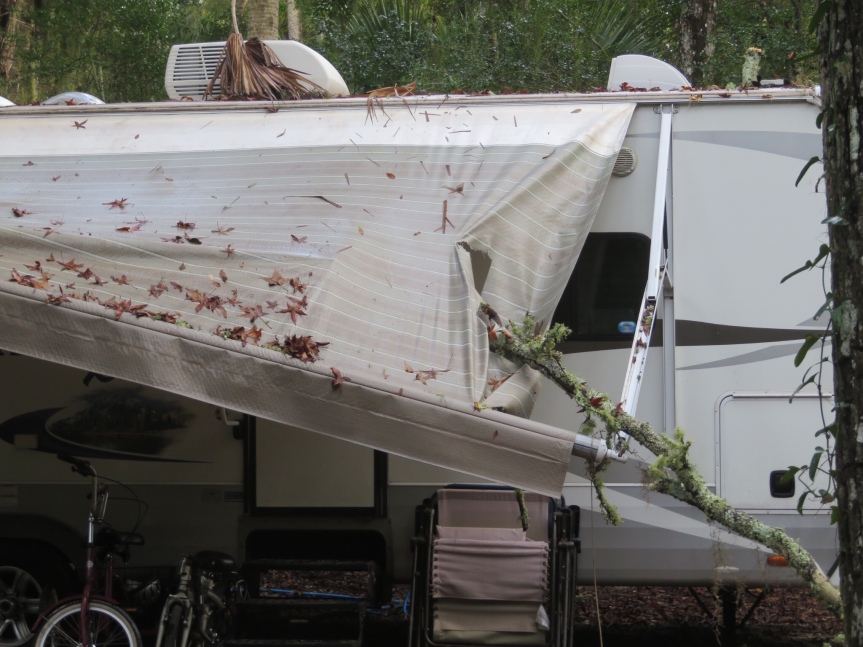 A lazy day for us two. Did a lot of lounging around inside and didn’t get much of anything done. I cooked up some shrimp with mushrooms and spinach then served it to myself with a scoop of rice. I was encouraged to see Cali munch a bunch of dry food. A few late night wanders around the park but not much other activity. Rain’s gone but it supposed to be high winds tomorrow. We’ll see what the morning dishes up. 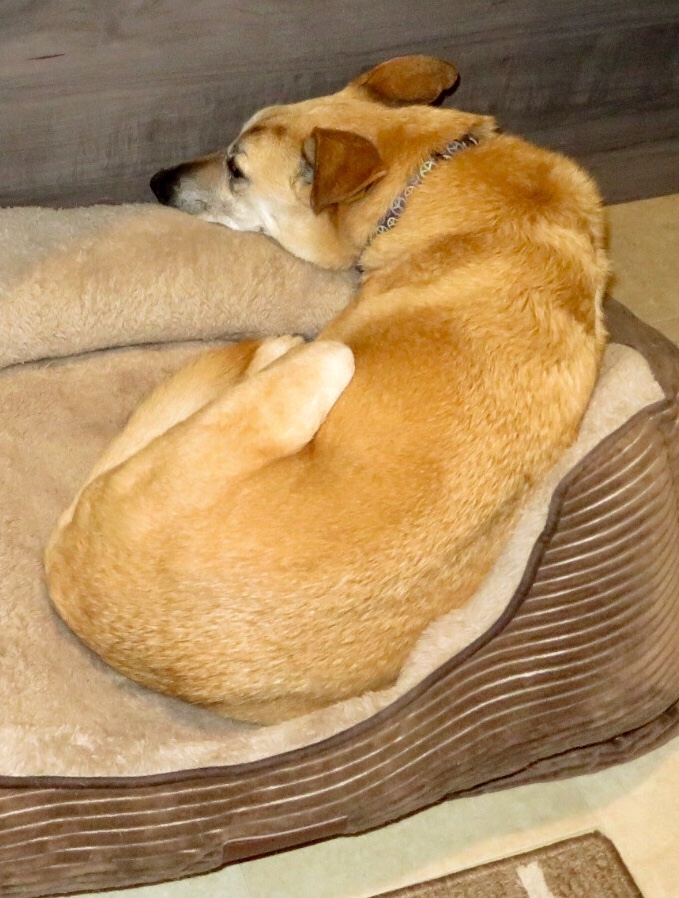 3 thoughts on “A Hard Rain’s a Gonna Fall”