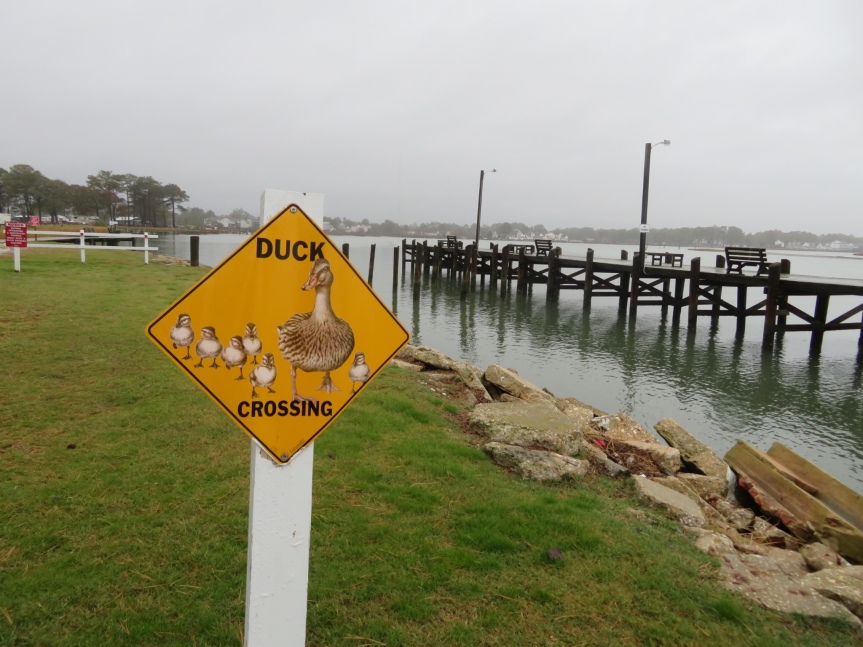 The rain finally started to let up mid morning so Cali and I went out and dodged the puddles to go have a look at Tom’s Cove. There are four other campers spread around the grounds with plenty of space between us. We walked down by the shuttered recreation building and walked out on one of the docks lined with benches facing the island so that on a lucky day, you might get a glimpse of a wild pony munching the marsh grass across the water.

PJ got up and after breakfast we walked over to the office to rent our space for another night. Things in the office moved slowly but we got our spot and hiked over by the boat ramp and then back over by the docks. We scanned the far shore for ponies but to no avail. PJ spotted a baby turtle in the grass, a little snapper I think, and we moved him closer to the water. I had a long chat with our neighbor, Charlie, while PJ walked the balance beam of a narrow breakwater out into the bay. 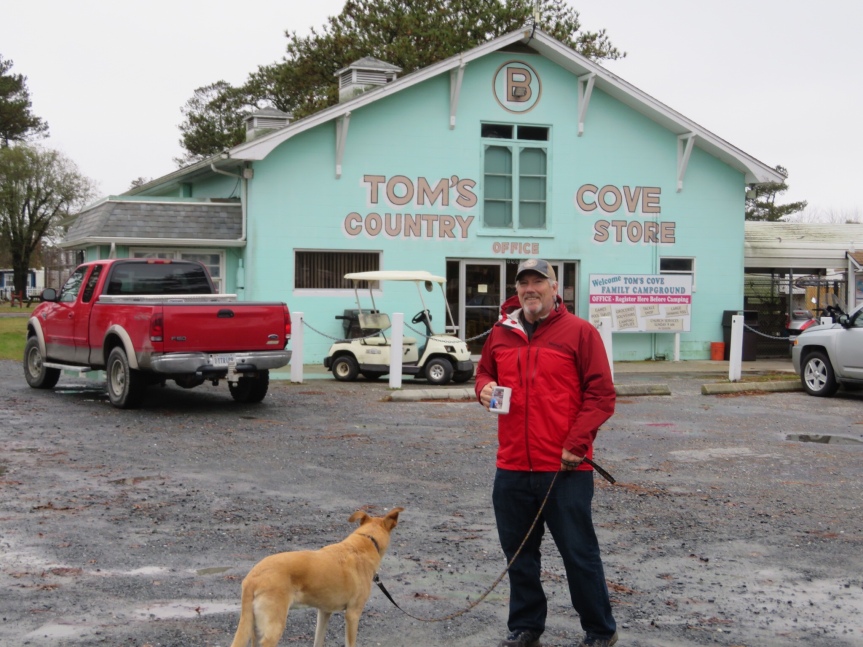 Getting our ducks in a row 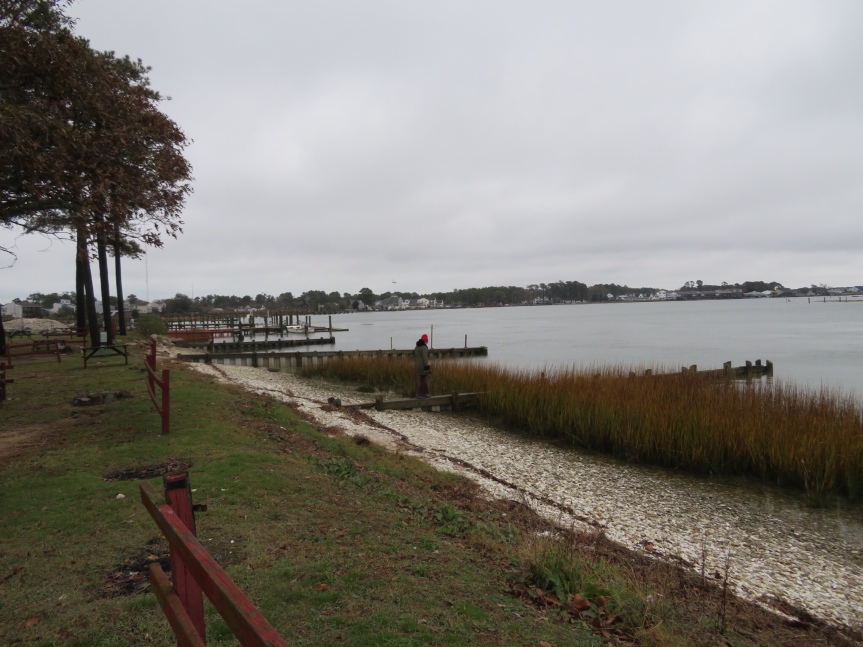 I put together a couple of cheese sandwiches then we took a drive over to the wildlife preserve on Assateague Island to see about getting a look at some wild horses. There was no one manning the gates so we drove through and pulled into the lot at the lighthouse. We hiked up the trail and checked out the historic beacon. The actual building is now only open on weekends so we were unable to climb to the top to take in the view. There were no ponies to be seen on the plain out front so we walked back to the car and continued down the road. After yesterday’s rain very few people were out so it was nice being able to stop any time we wanted to look off over the fields. We saw a few horses way out in the distance but we’re hoping to get a closer view.

We went to the wildlife loop to hike around and see what it had to offer. A nice long walk through pine forests that have been devastated by pine beetles. A mile or so in there was a wooden boardwalk that went out over an expanse of marsh grass but today there were no ponies grazing. We followed the loop around and took a side trail, the bivalve trail, out to the bay. Beautiful marsh area with nary a soul to be seen. We went back to the car, about 3 miles in total, then drove to the end of the road.

They must be around here somewhere 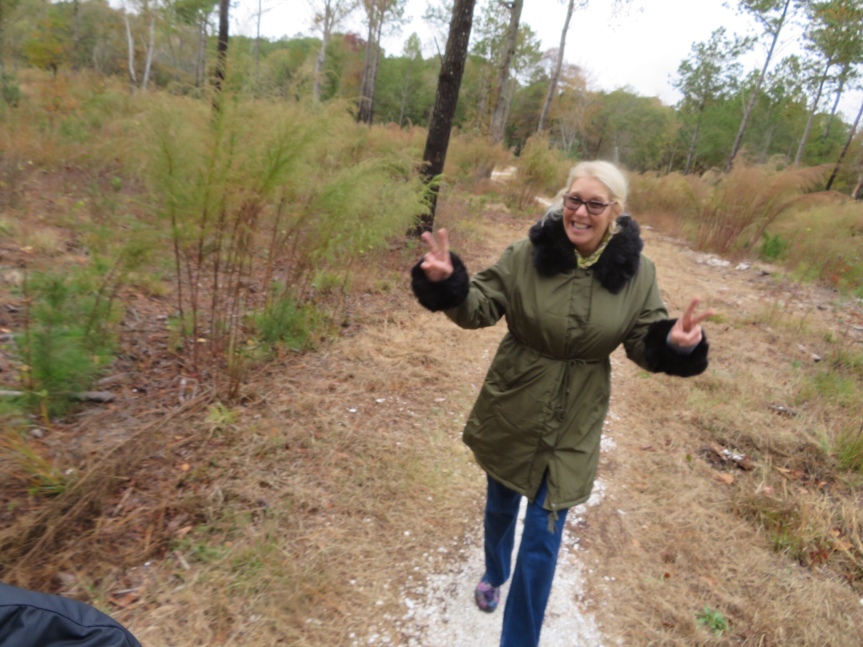 A stream ran along side the road and there were numerous herons, both blue and white, diligently fishing the shallows of the rapidly moving water. There were a few blue headed woodpecker like birds but they were shy and fast moving so I was unable to get a photo of them darting among the trees. The quiet was mesmerizing and we loitered along the banks watching the large birds stealthily stalk their prey. 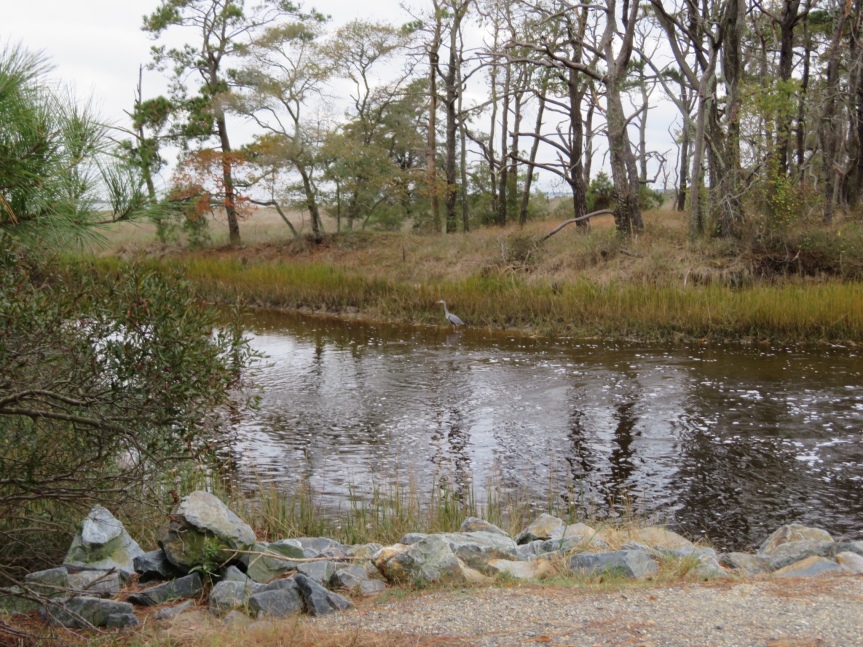 The road ends at the Atlantic and today there was a bit of a swell rolling onto the sand bar of the shallow beach break. Offshore winds were grooming the sets as intrepid locals were braving the icy temperatures to catch a few decent waves. A crew of guys were watching, hooting and taking pictures while we pulled up our collars against the wind and stood on the dune watching.

On the way out we were finally rewarded for our patience with a sighting of three Chincoteague ponies munching the grass out near the road by the bike path. We made a brief visit to the Nature Center checking out the displays and reading up on the local history. The interpretation center can attract over a thousand visitors in high season but today, the guide said we numbers 40 and 41. We didn’t stay long as it was getting close to the 4:00pm start of Bohemian Rhapsody at the historic theater in the old downtown.

We wended our way through the small avenues lined with tourist shops and an excess of restaurants and mini golfs. We were just in time to catch the movie and grabbed a bag of popcorn and chose seats near the back. There were only eleven patrons present to watch the show. All of them older than PJ and I. The theater had a cool old school vibe much like the La Paloma back at home. It was a good movie bringing back nostalgic memories and a poignant reminder of the devastation at the beginning of the AIDS outbreak in the eighties. Good cast and a nice change of pace from campground living. 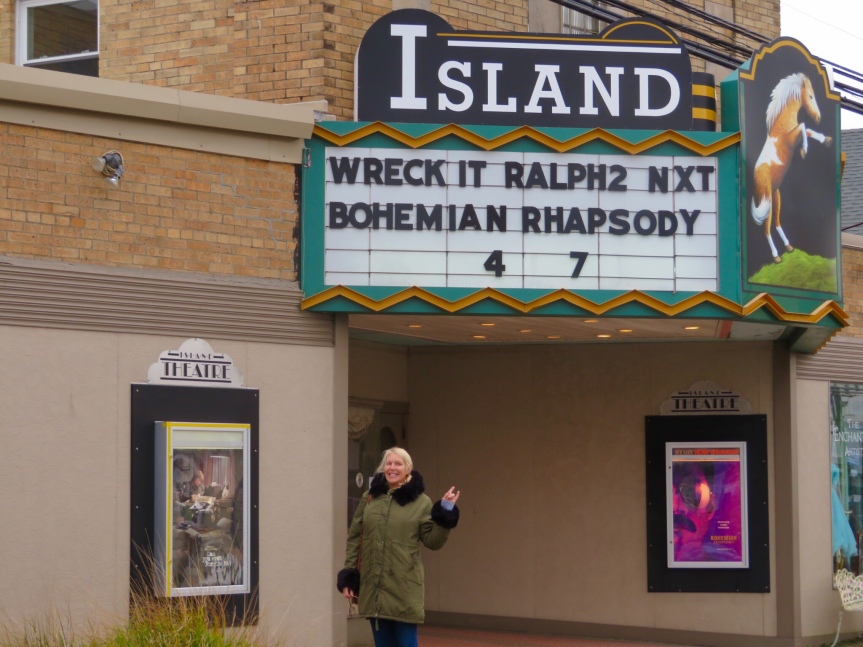 Afterwards, we walked around the empty waterfront to check out the ‘Virginia is for lovers’ chairs and the ‘Misty’ horse statue in the park. The boat slips were mostly empty and only about half of the waterside restaurants were open for business. Cali had been inside for quite some time so we hurried back to set her free then had a bite of dinner and watched a little TV. I sorted through today’s photos and did some writing. Off to Virginia Beach tomorrow. 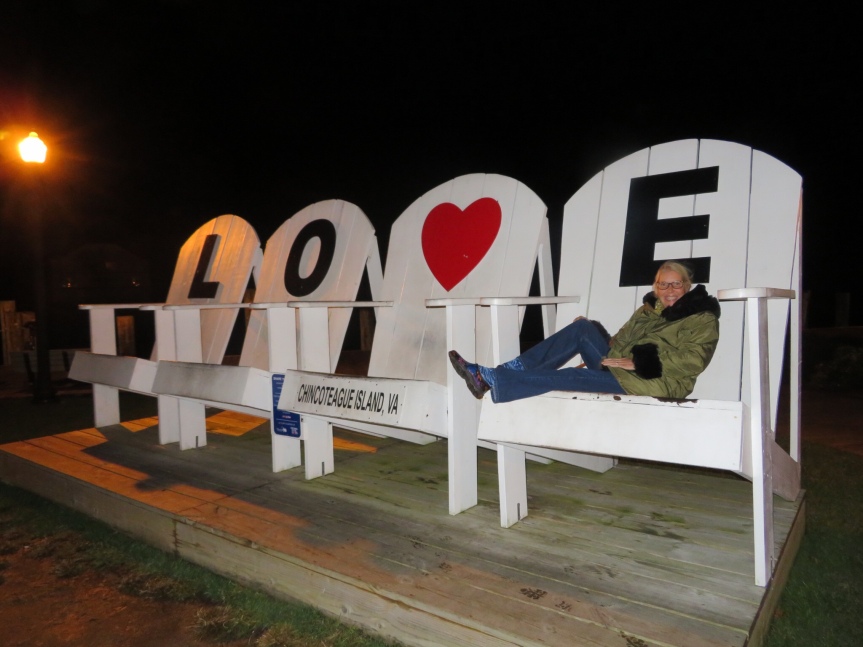 6 thoughts on “In Search of Wild Ponies”