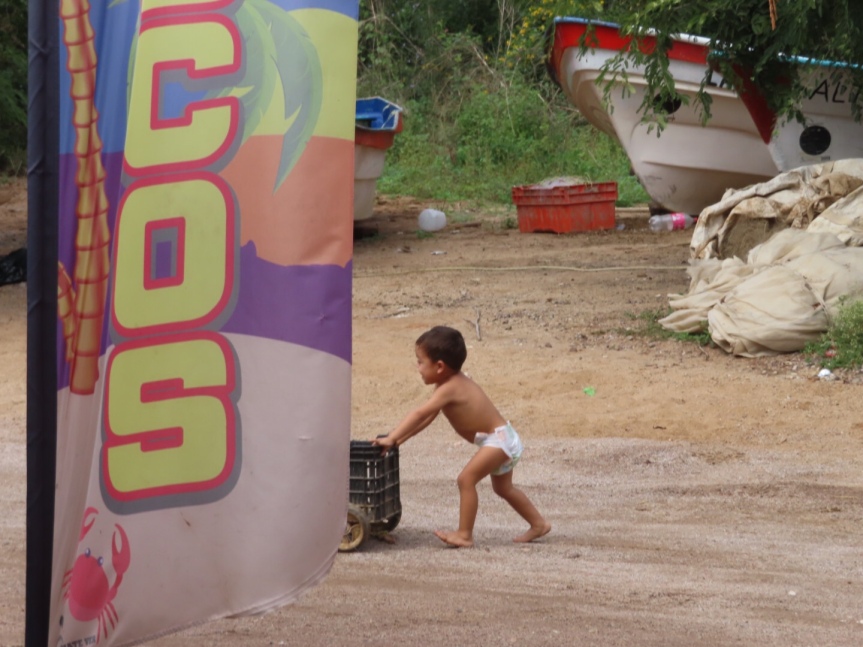 Up early again, I caught an amazing sunrise. Don’t know why I can’t manage to sleep past five these days, but that’s the way it’s been going. I had the camera in one hand and a hot mug of tea and the leash in the other. Cali wasn’t as interested in standing around waiting for the sun as I was and she’d occasionally give me a yank sloshing boiling hot liquid onto my hand. Ah, the love I’m shown. 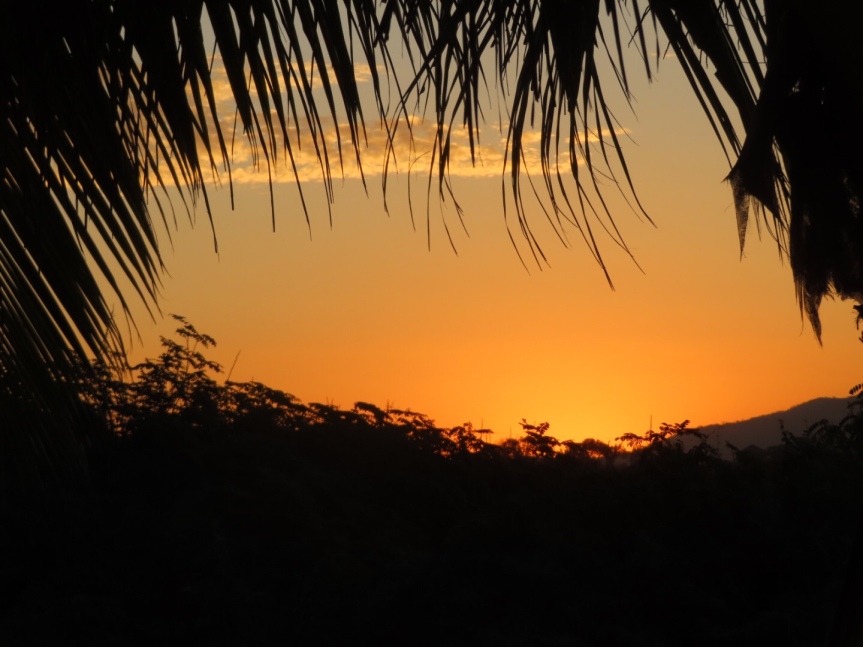 The majority of the crew staying here at Villa Celeste headed off on a sightseeing tour with the the owner Noe this morning. By eight a.m. they had cleared out to go visit the tequila factory in La Noria and to continue on to the quaint colonial town of El Quelite for lunch. They expected to be gone for at least eight hours. I didn’t want to leave Cali alone for that long and let’s be real, what business do I have visiting the tequila distillery. Besides, I pretty much had the entire complex to myself. 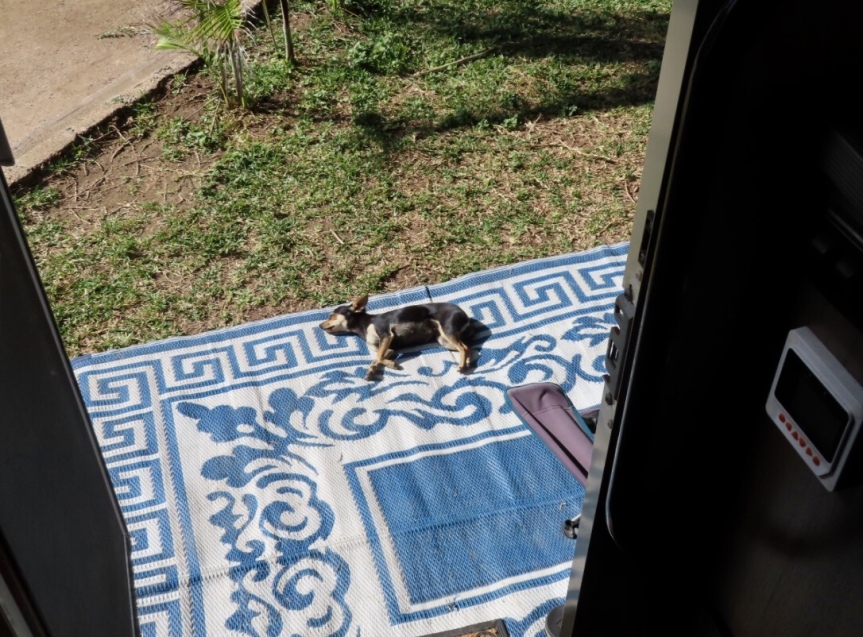 I took the paddle board out to survey the coastline to the north. The wind here has been ever present and the water was a little choppy making it hard to get around. When I was walking out the gate, Luciano and I spotted a large piece of jetsam on the beach. At first I thought it was rocks but upon closer inspection it was a full sized sofa that had washed up on the beach. You never know what you might find after a high tide in Mexico. 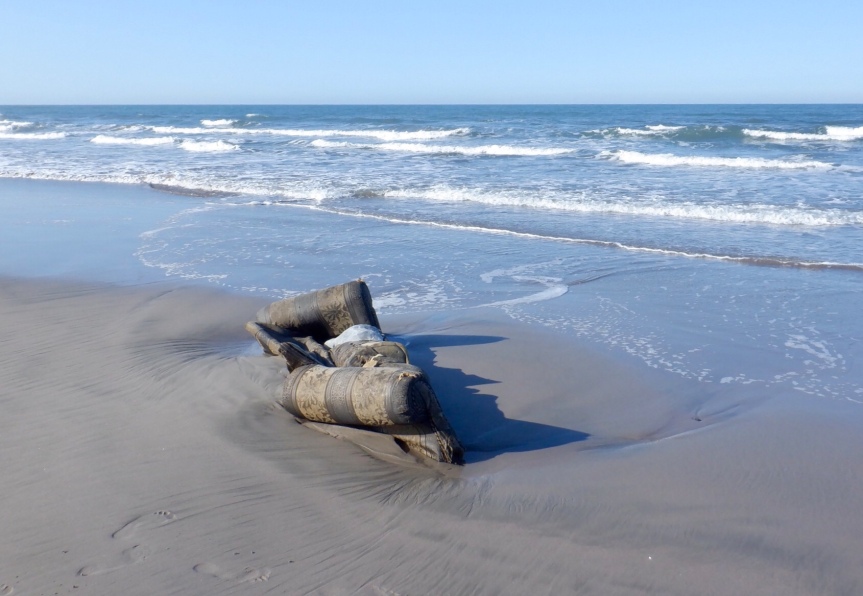 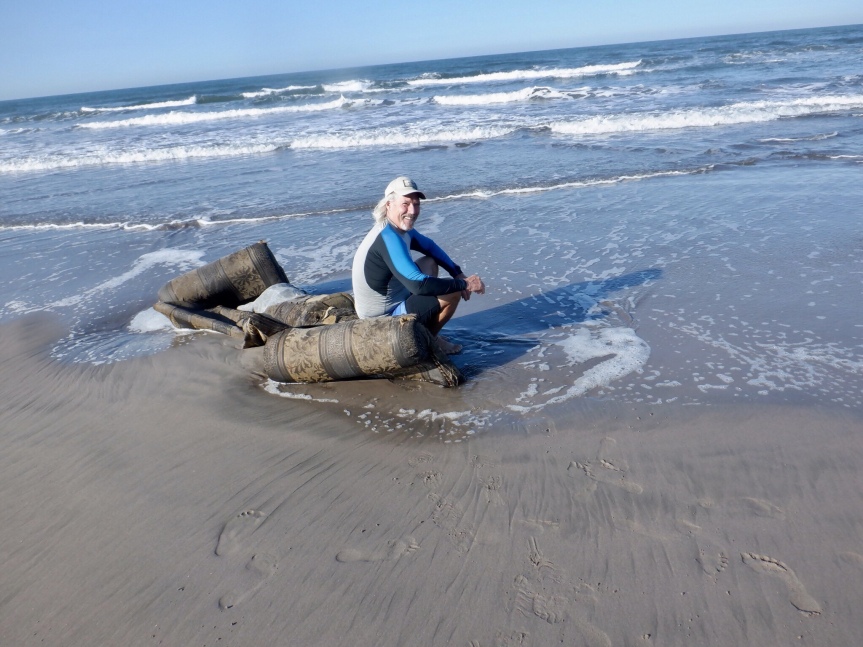 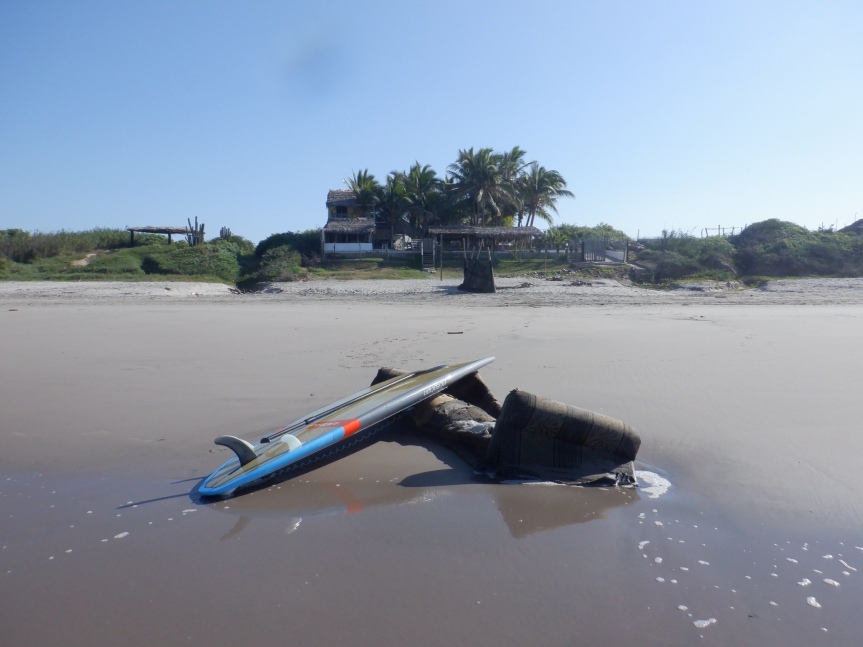 I went as far as the main road into town then gave up on paddling further turning back to make my way home. I caught a few funky, choppy little waves in front of our big palapa then called it a session and went in to have breakfast and lounge out under the awning. Since the place was void of people, I played guitar for an hour or two singing loudly and banging away. Cali had free reign and it was an enjoyable, peaceful day. 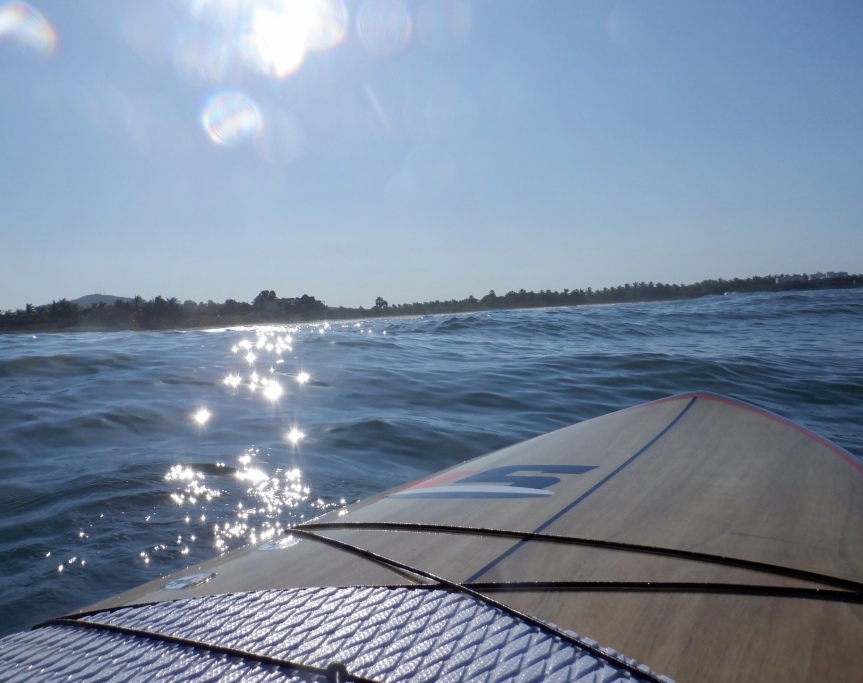 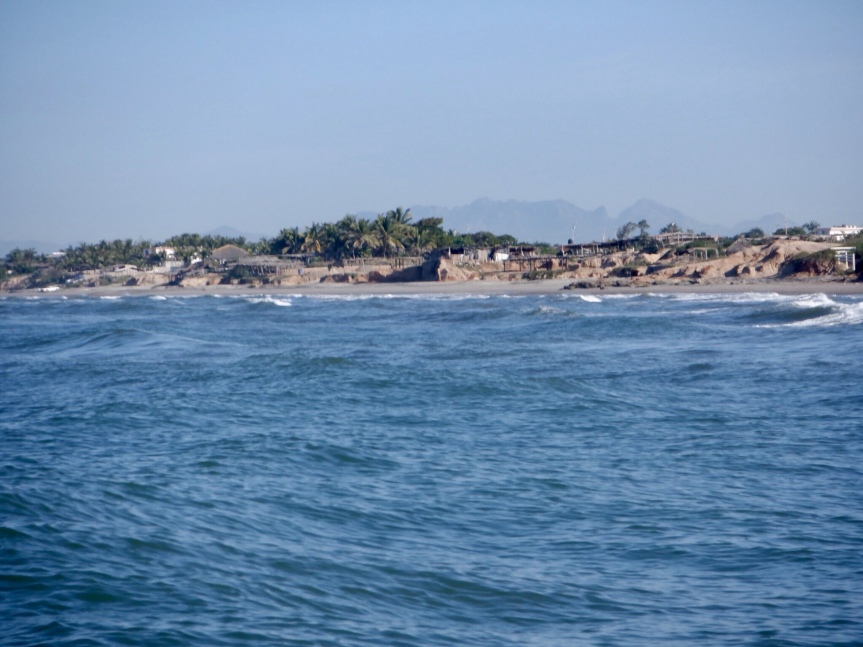 Around one o’clock I was getting hungry so I unwrapped a bicycle and pedaled my way into Celestino Gasca. Luciano had recommended that I visit El Chapo for some seafood. No, not that El Chapo, Mariscos El Chapo at the far end of town. I wandered around the little village until I found it then sat on their patio and ordered up a plate of mixed ceviche – fish, shrimp, octopus and some kind of snail. 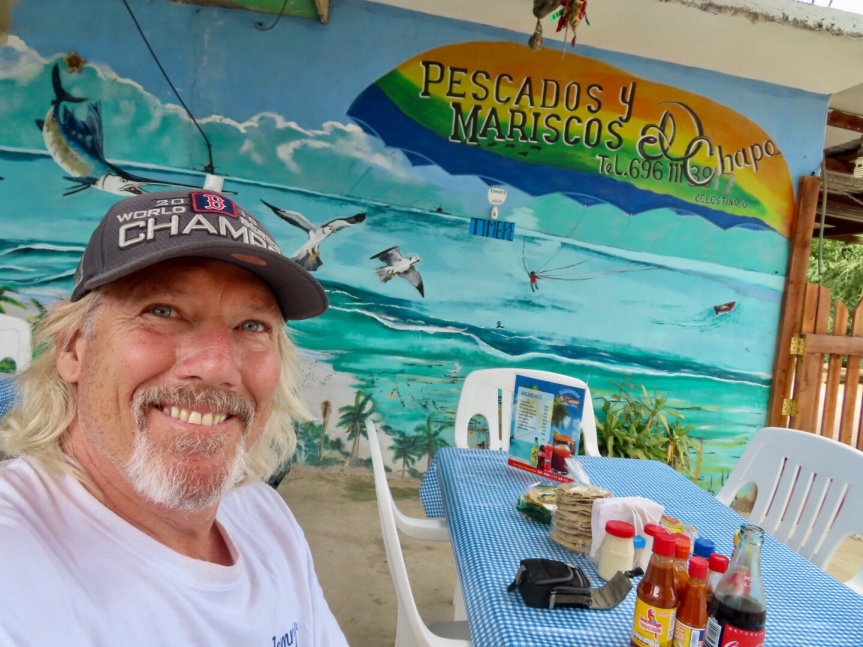 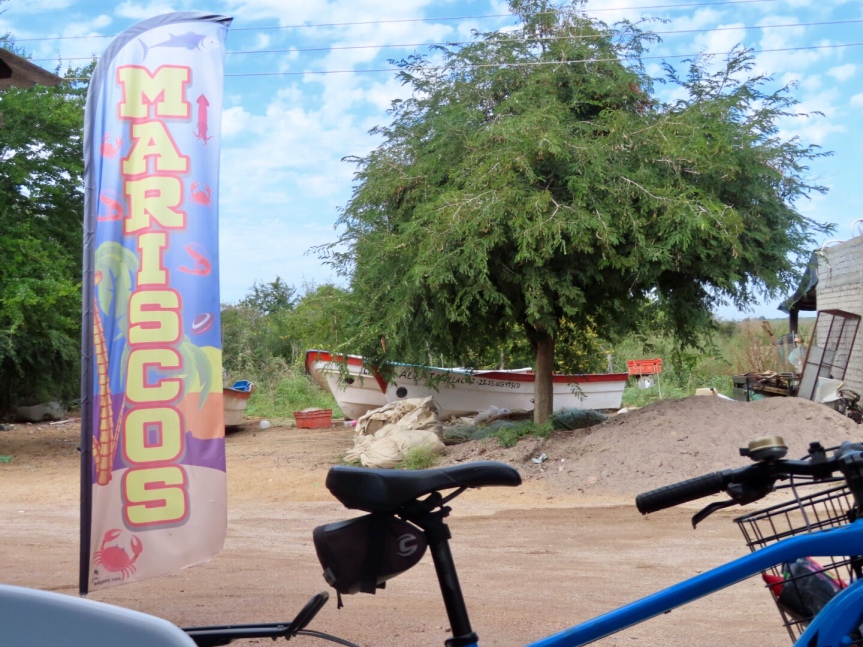 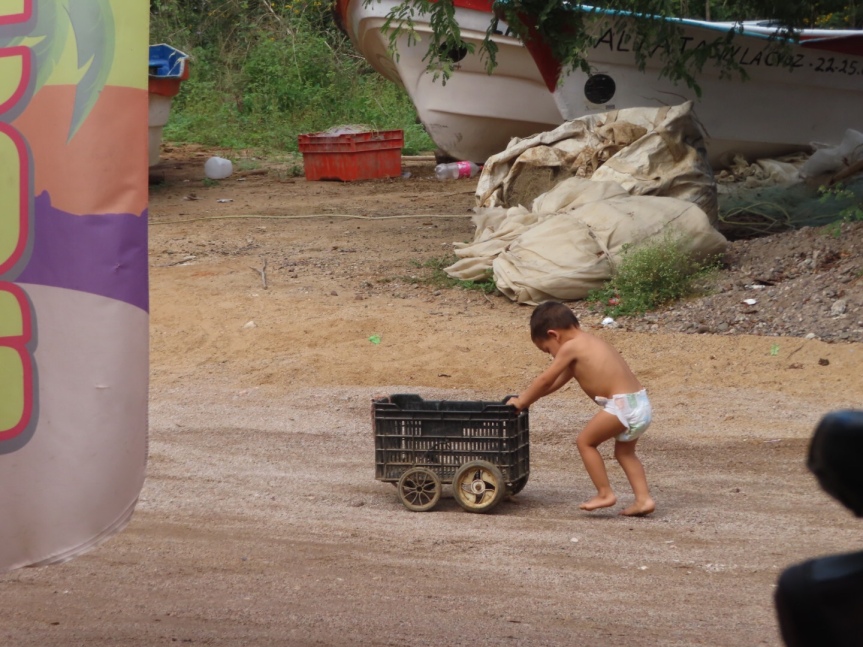 The plate was huge. Glad it was all that I ordered. They had eight different hot sauces so I had a taste testing contest amongst myself and myself. I ate half a tostada with each, then rated them as to which had the better flavor and kick. The La Negra Va was my favorite, followed by the home made house salsa, then the habanero. It was tough going getting through the whole plate of fish but I persevered. Meanwhile, the diminutive mosquitoes under the table had a taste testing contest of their own loading up on my sweet gringo erythrocytes. 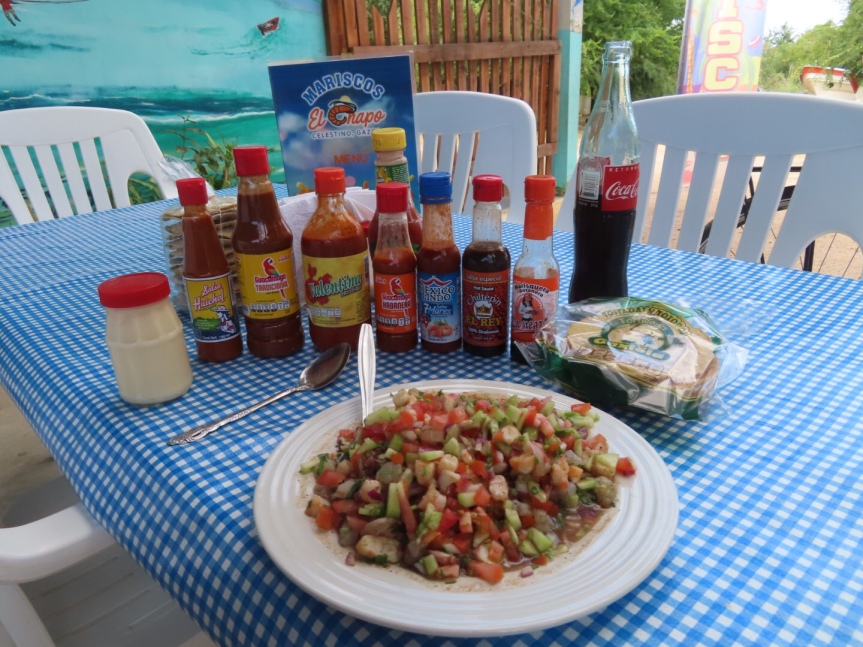 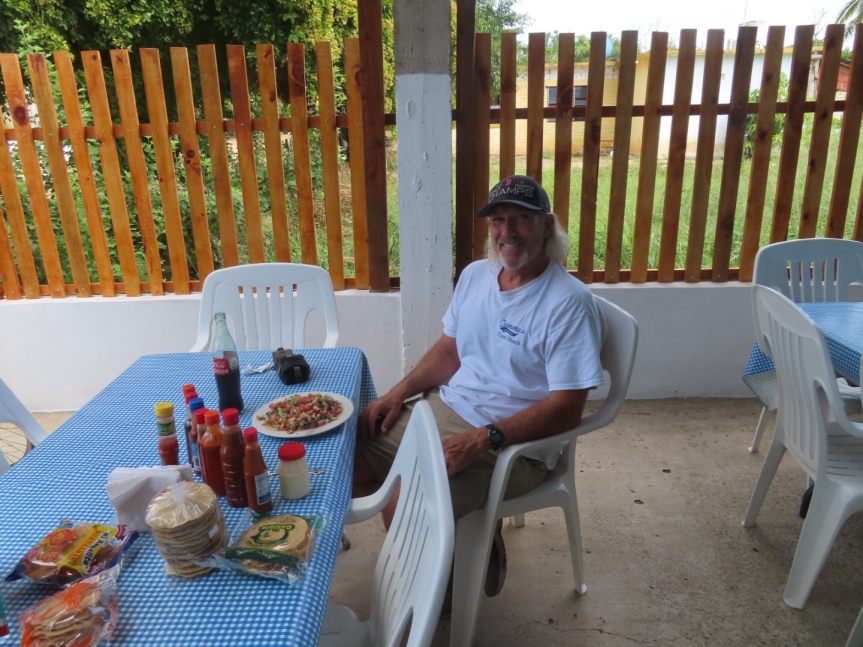 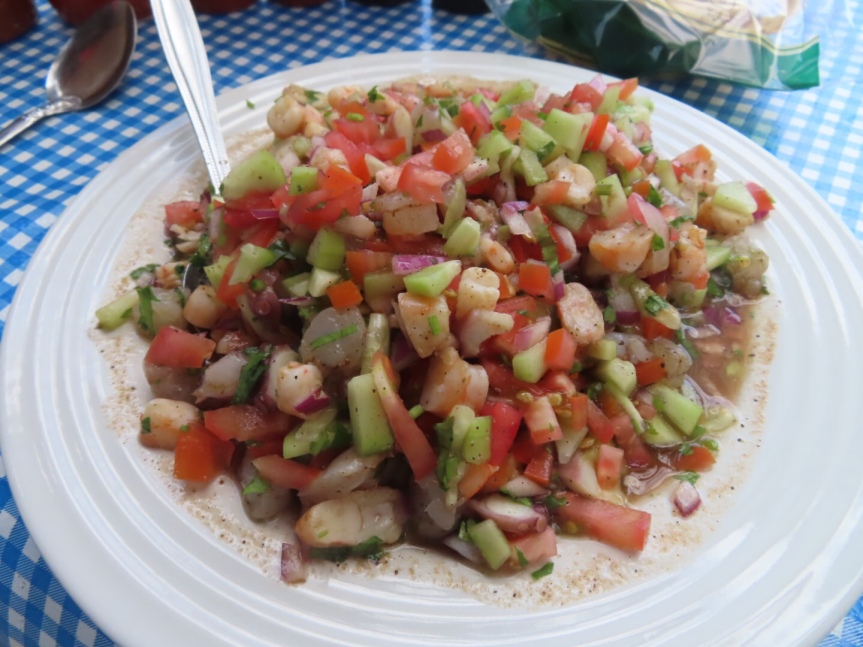 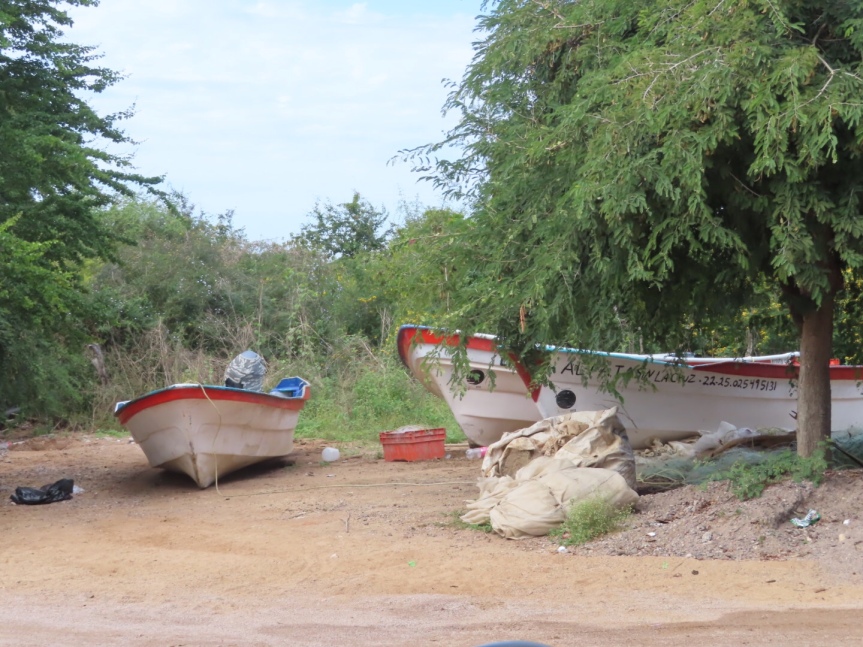 When I got back to the compound, I sat around with Wendy and Kevin from B.C. for a while up in the upper lot. She had stopped by earlier when I was playing music and introduced herself. She’s getting into the ukulele and Kevin had a little keyboard set up. It was hot and humid. The choices going through my mind were nap or jump in the ocean. I took my leave then grabbed the boogie board and went out to ride some bumpy little waves. Nice warm water. I had a lot of fun then came in and dried off up on the patio that overlooks the beach. 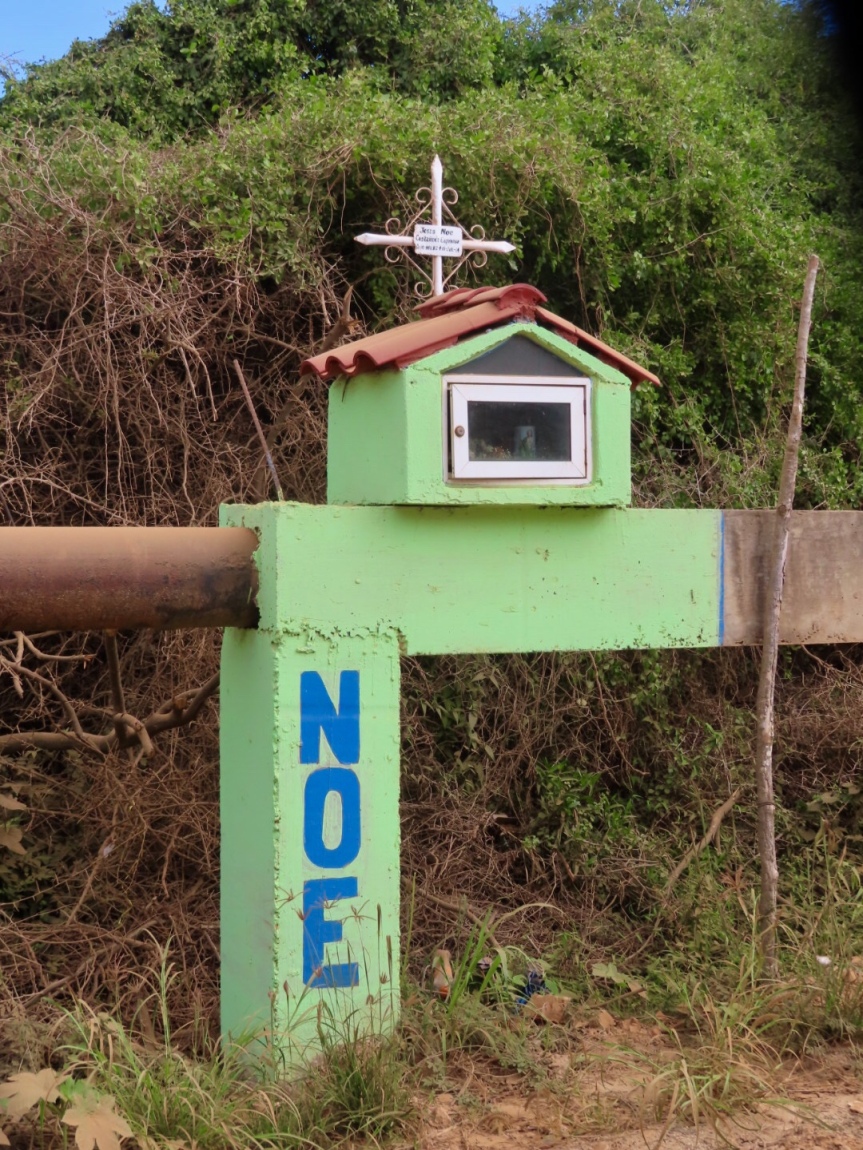 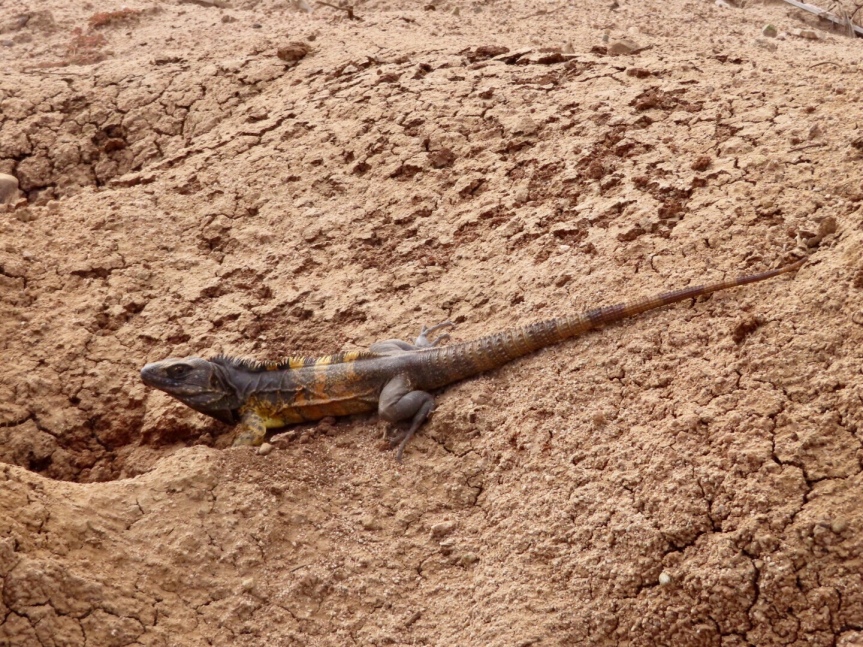 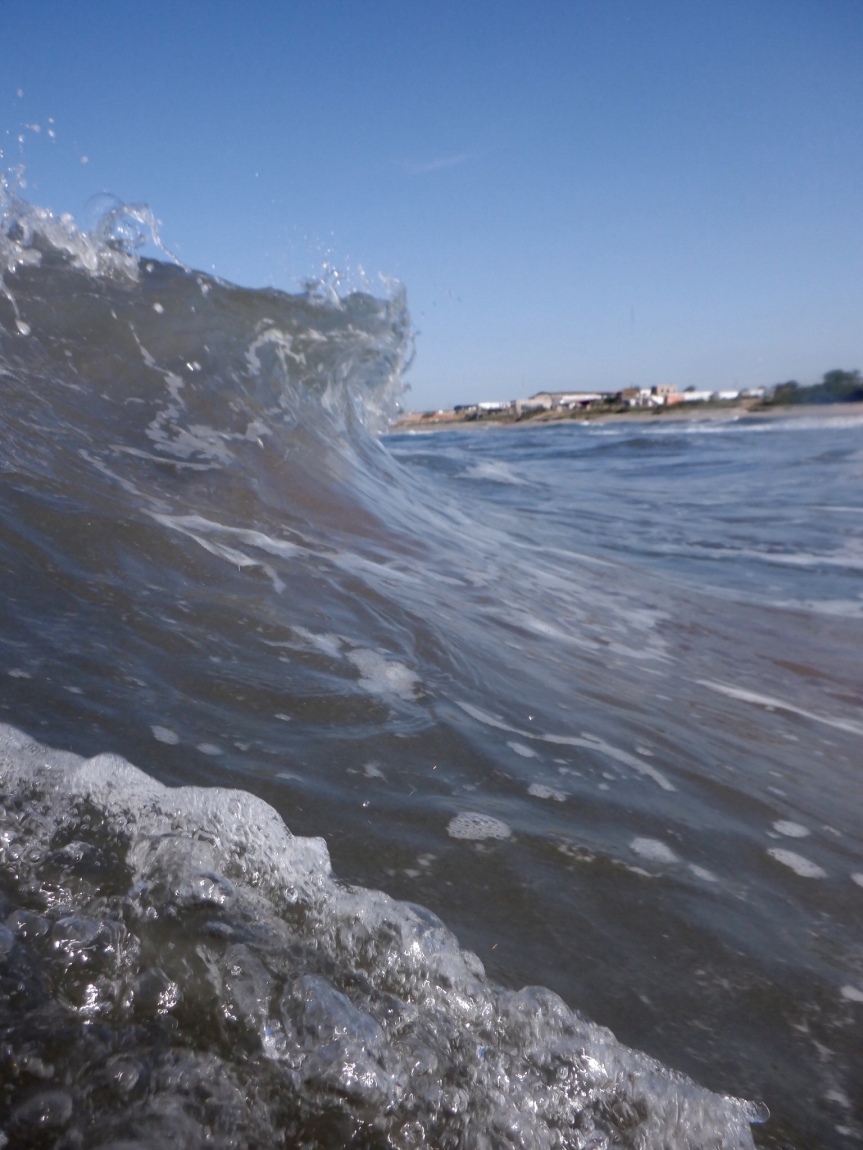 Had a little rest inside with Cali, dozing for a minute or three until I saw the sun dipping low and went out to join a few other sunset watchers on the patio. They were all jazzed from their excursion today. The guys all had cool looking t-shirts from the distillery and everybody recounted their adventures while we all witnessed the finish of another day in the fishing center of Celestino. 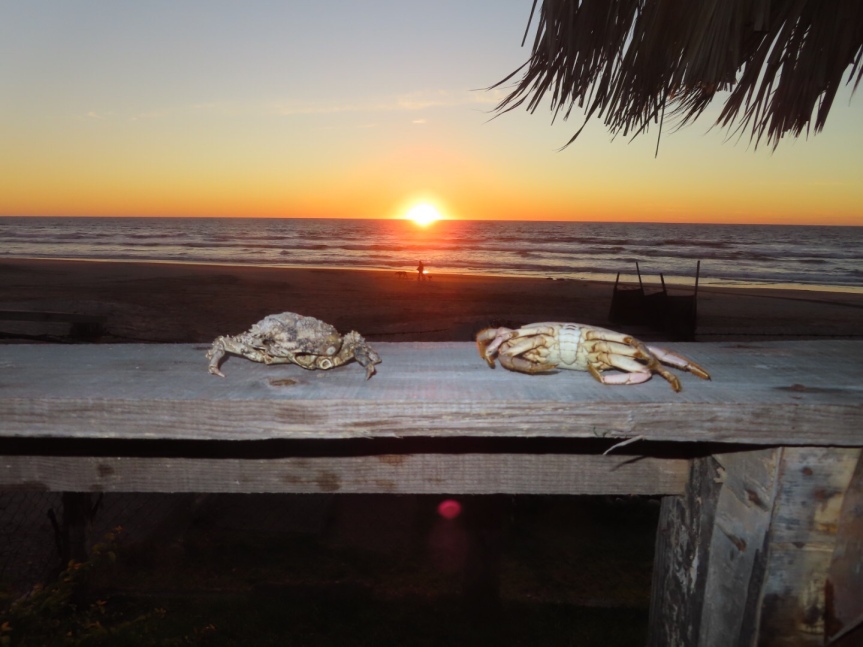 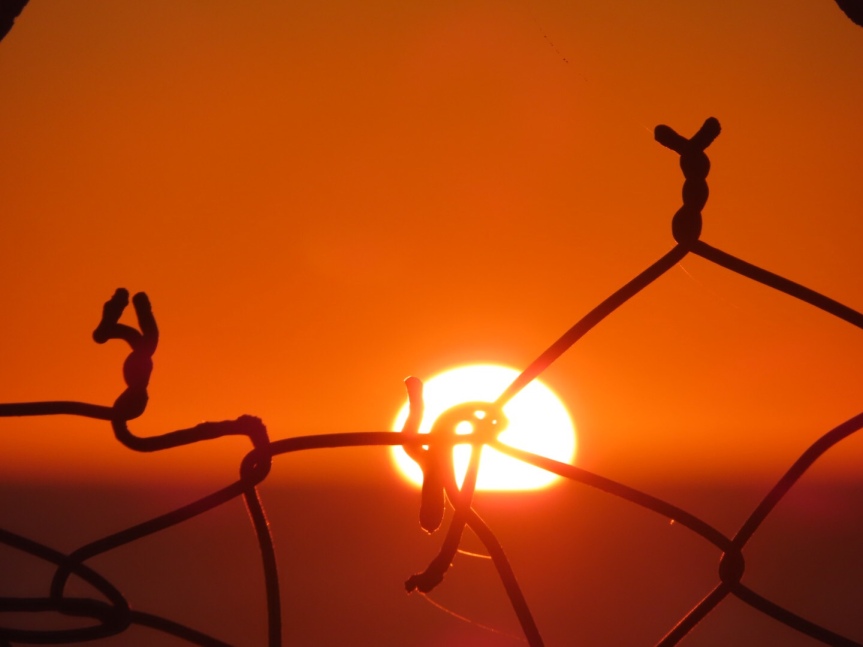 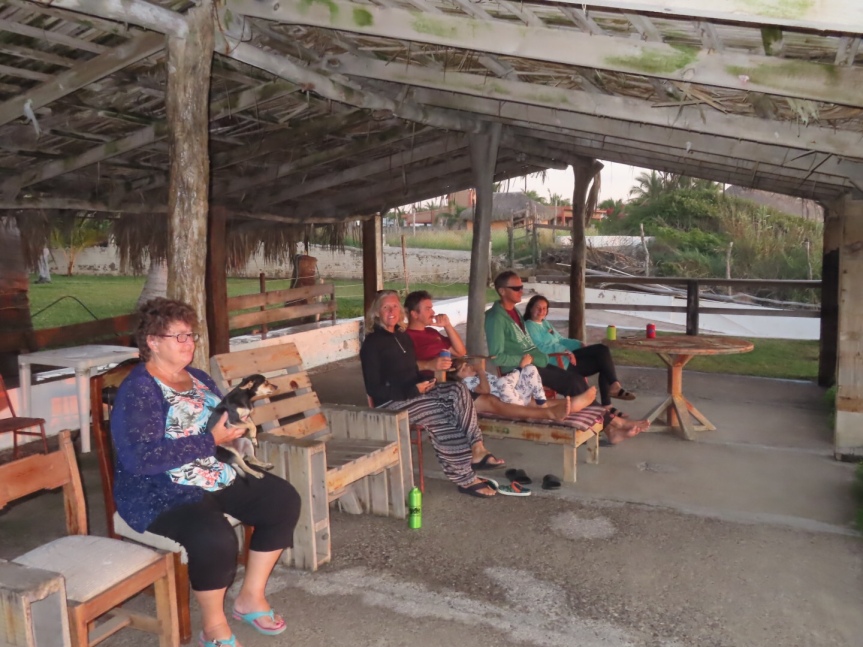 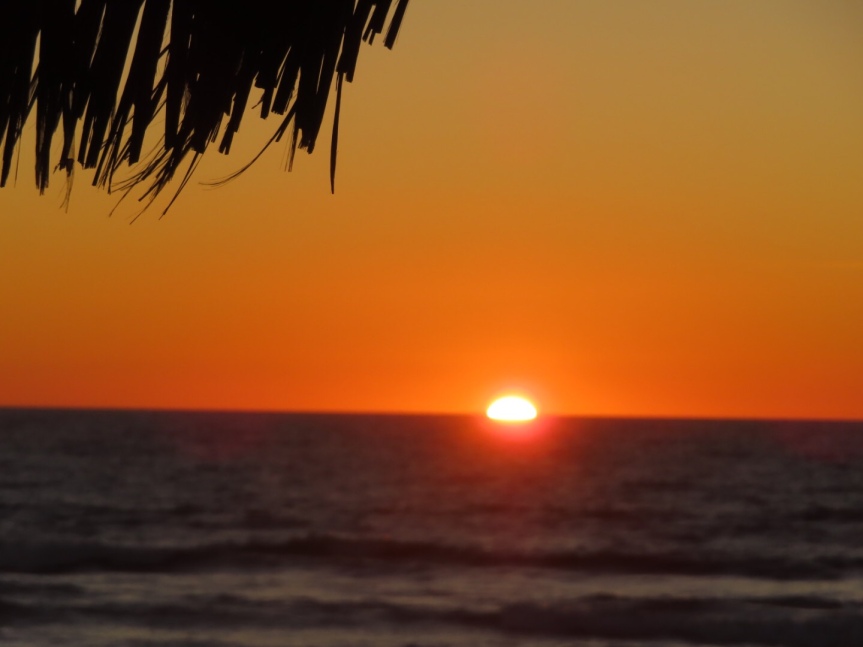