Another day on the move. We were up early clearing up camp. We tried to take advantage of our last day in Melbourne as much as we could. It was warm early and another summer like day was on tap. We ate breakfast at the picnic table watching a trio of juvenile pelicans practicing their diving skills. They would follow each other around swooping into the water to splash down in the hunt for fish. A beautiful heron landed not ten feet away and fished from the old pilings that jut out of the water in front of our dock. The wind was barely a breath on the water and it was smooth as a sheet of glass. We got everything packed away and ready to go then used our last hour to get in a final swim at the big pool. A great way to start the day.

There was a self serve car wash about a block from the campground so it was decided that Wilson could use a good bath. We scrubbed him up and gave him as neat a polishing as we could then pointed our nose down the A1A towards Sebastian Inlet. Our drive today was a short jaunt. Only seventeen miles.

It was early afternoon when we met the nice rangers at Sebastian Inlet State Park and got ourselves set up in site #21. We rested up awhile then decided to hop on our bikes and have a look around. Up at the end of our little island sits Cocoanut Point, a spit of land with a shallow beach with clear water for swimming. We hopped in and got a quick wake up from the cool flowing water being careful not to step on the hermit crabs that were scuttling along the bottom. PJ hunted sea shells and I explored around the marina. PJ was excited to find a nine armed sea star and we checked out his little tube feet then put him back. 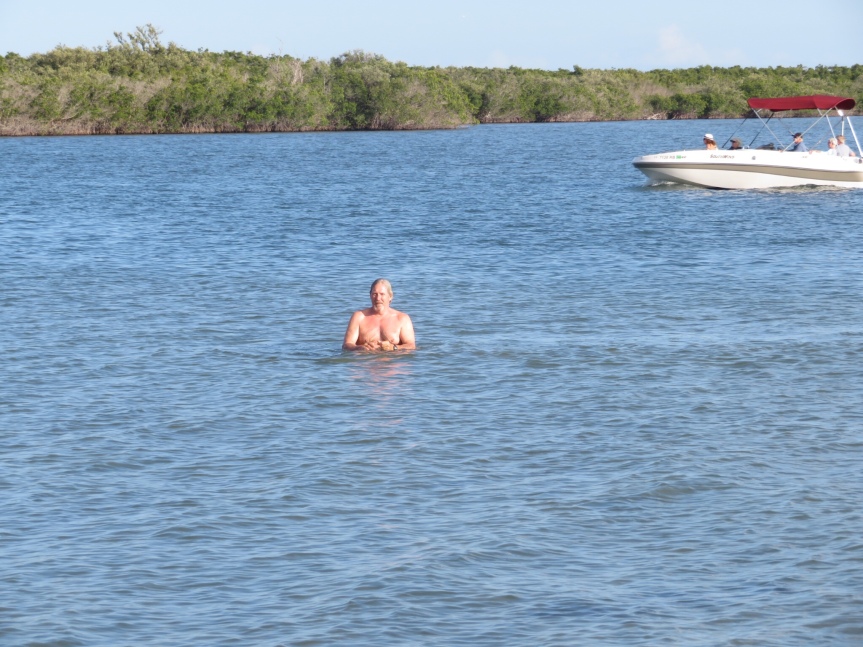 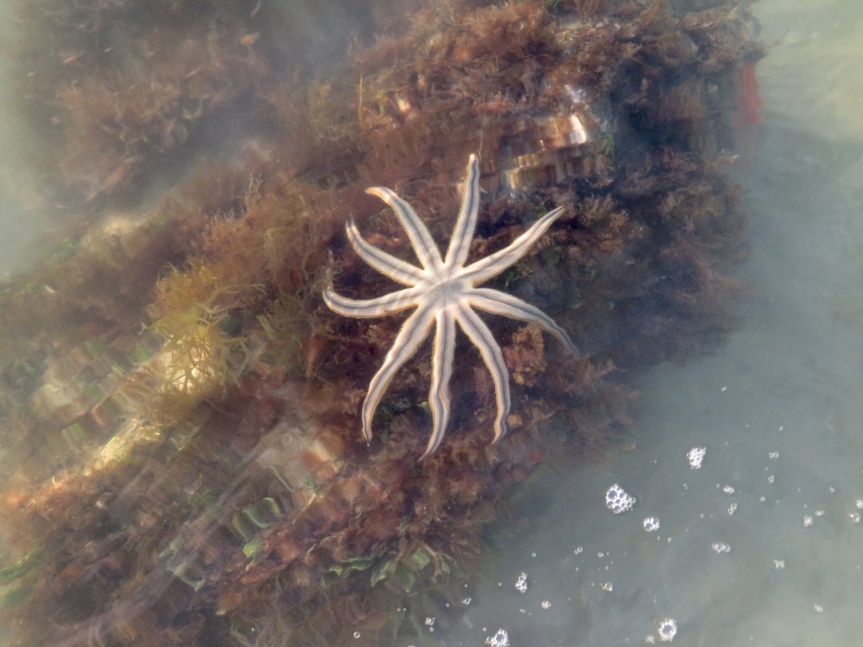 The shadows were growing long but we still wanted to have a look at the jetty at Sebastian Inlet, one of Florida’s premier surfing locations. We pedaled back to the park entrance and had a look at the small pier on the south side of the Inlet. Lots of fishermen getting in a final shot at angling fame and fortune before facing another long work week. Looking across the water, we could see a mob of hopefuls, rods and reels standing shoulder to shoulder seeking that elusive flounder or blue fish.

We exited the park and rode up over the narrow, shoulderless bridge dodging big duallys towing boats back home after a weekend of fishing. Once we pulled the uphill side of the bridge, we coasted rapidly down the steep hill taking in the view and trying to stay upright at the same time. The lady in the booth at the beach side of the Inlet wanted to charge us to get in but we explained that we were campers and were exempt. She let us in but said to bring the car pass next time. There were a bunch of tents and booths set up on the beach for the big surf contest that starts tomorrow. 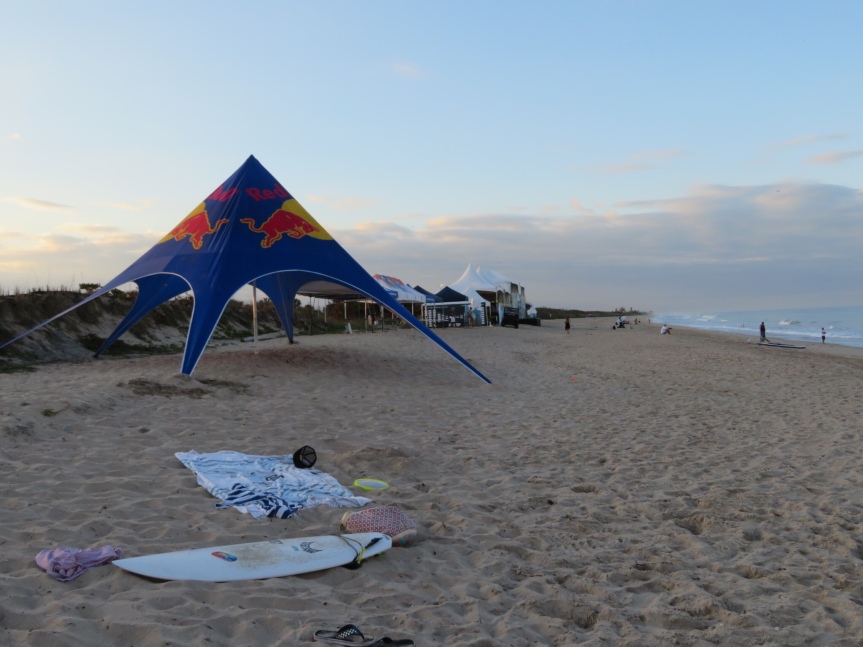 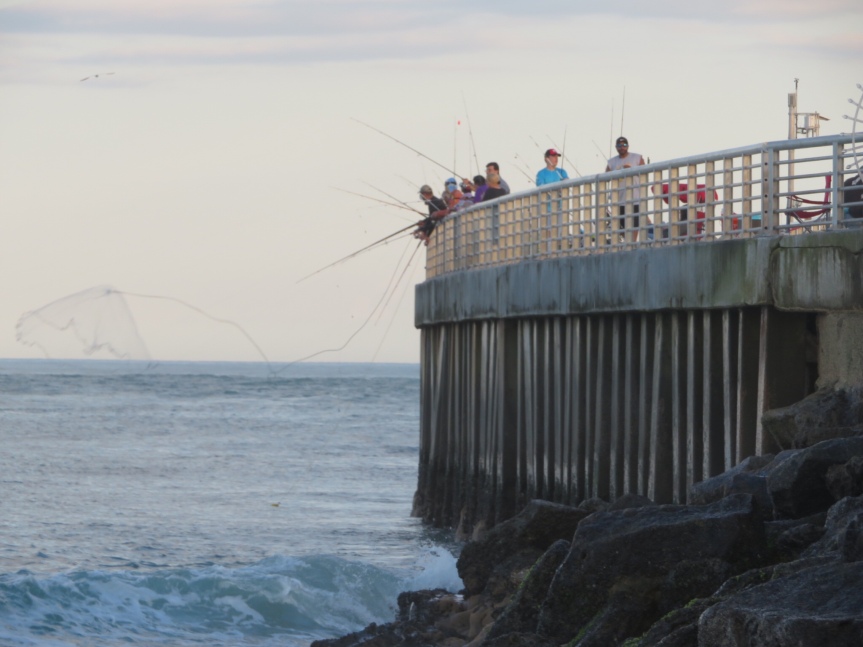 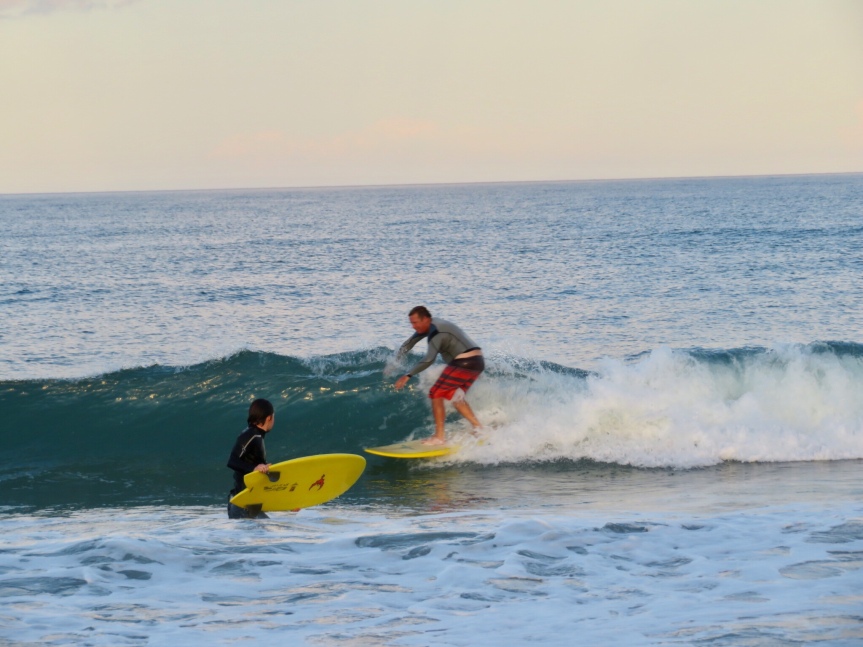 We walked out on the sand and watched the surfers catching some small waves and charging into the shore. Up close, it was crazy to see how packed together the fishermen are on the jetty. How they keep their hooks and lines to themselves is hard to figure. It was a fun beach day and there was good energy with a positive vibe as people walked around the beach. The women’s competition begins in the morning and there were some red hot surfer girls warming up on the waves that rebound off of the jetty. We could have stayed longer but the sun was going down and we didn’t bring any lights. We wanted to get back over the bridge before dark so we saddled up and pounded away on the pedals. 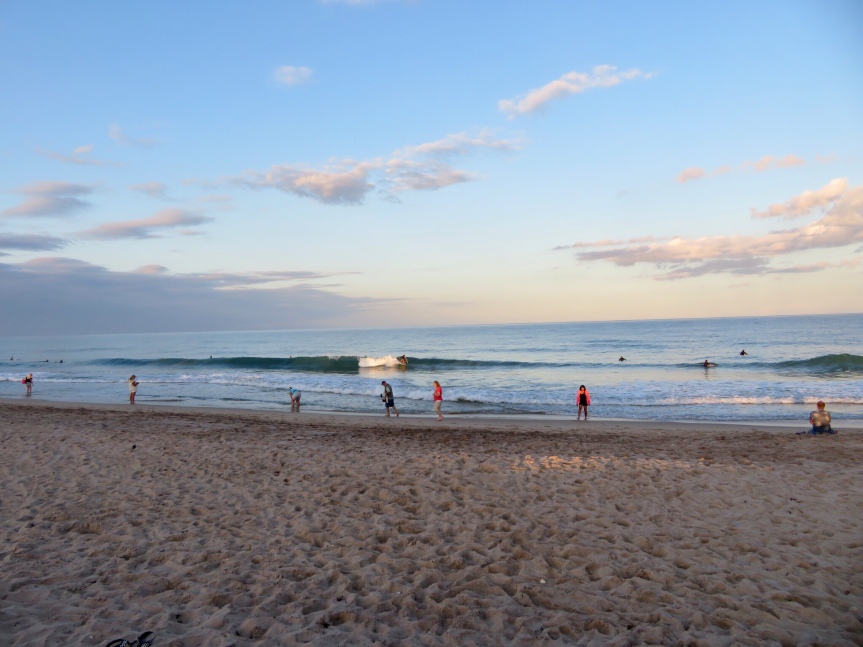 Back in the camping area on the south side, we found a comfortable bench and watched another outrageous sunset while tiny no-seeum type flies tried to make a sundown meal out of us. A new kind of funky looking stork like bird was hanging out on the grass by the fish cleaning area and some last minute boaters were racing for the boat ramps. It was still seventy degrees and comfortable in shorts and tees. Can’t beat it. 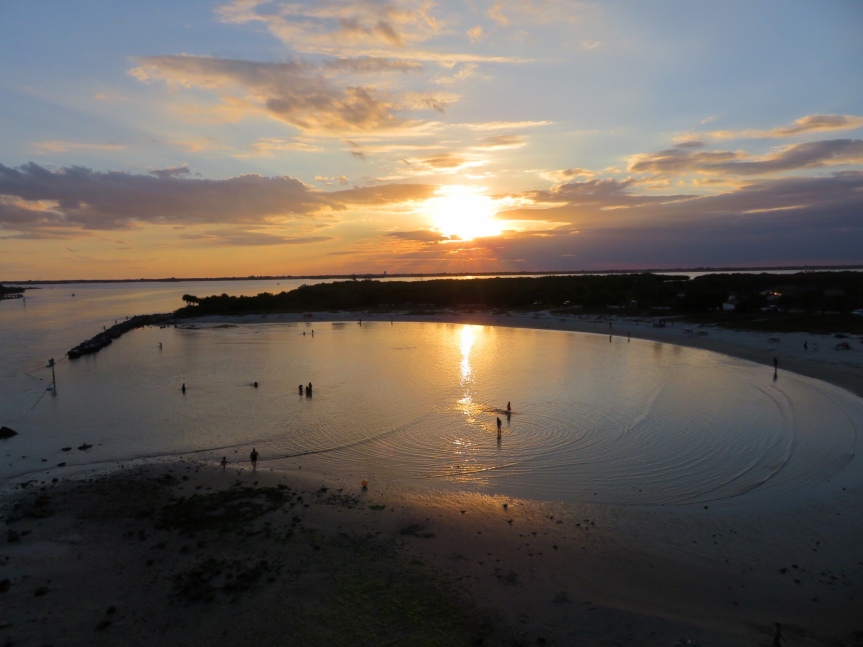 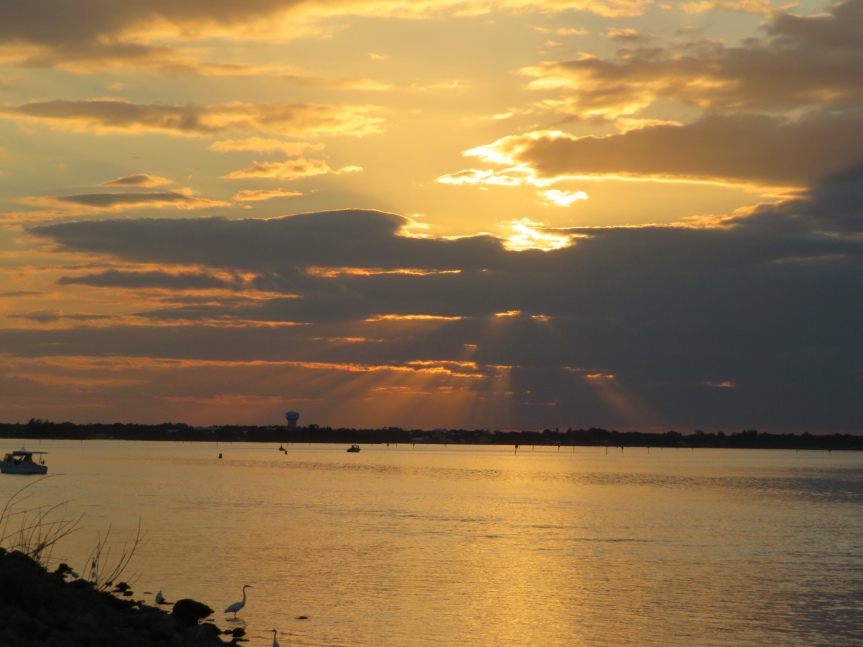 We had a bite of dinner and watched a playoff football game. As eight o’clock neared, we got settled in at the booth to hook up on FaceTime with my Dad’s crew since he has finally decided to make an honest woman out of Sandy and put a ring on her finger. Sandy’s brother Bill officiated at the nuptials and did a great job of keeping it light and flowing. A small crowd of family and friends gathered and it was a sweet ceremony. Best wishes for many happy days ahead. Much love and joy from us here in the sunshine state.